Trending
You are at:Home»Government»Coronavirus Update: 880,635 Infections, 23,170 Related Deaths; NJ ‘Will Have to Scrap’ to Hit 4.7M Vaccinations by Start of Summer

New Jersey Health Commissioner Judy Persichilli projects that the state may have to provide another half-million vaccination doses through May and June to hit its target. 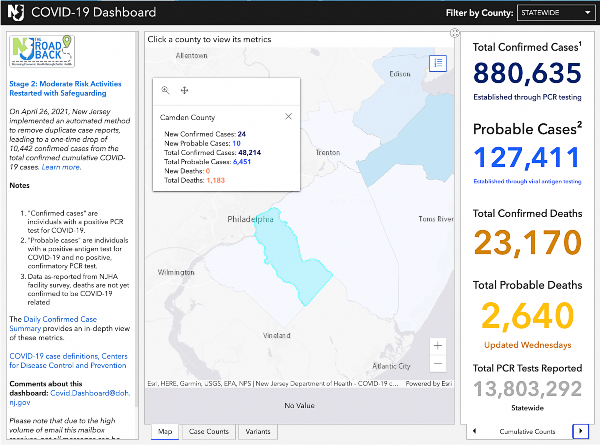 Sadly, 10 more residents have perished from complications related to the virus, bringing the statewide, confirmed death toll to 23,170 lives lost during the pandemic.

In addition to those lab-confirmed fatalities, the state has acknowledged another 2,640 probable COVID-19-related deaths.

More than 13.803 million polymerase chain reaction (PCR) tests for COVID-19 have been performed statewide, with an 10.016-percent positivity rate per 100,000 residents.

The statewide average of COVID-19 spot positivity testing based on PCR test results stood at 3.55 percent May 6; in South Jersey, it was highest, at 3.90 percent.

Rt, the variable that describes the seven-day, rolling-average, statewide rate of transmission of new COVID-19 cases, hit 0.67 May 10.

That’s adjusted down from an Rt of 0.97 reported May 8, due to a reporting of backlogged antigen cases from May 5, which affected the seven-day rolling average, New Jersey Health Commissioner Judy Persichilli said.

Throughout New Jersey, 1,063 people currently are hospitalized with a suspected (68) or confirmed (995) case of COVID-19, Murphy said.

Among those hospitalized patients, 250 are in intensive or critical care, and 165 of the ICU and critical-care patients (62 percent) are on ventilators.

In New Jersey’s 71 critical care hospitals, 92 patients were hospitalized with COVID-19 yesterday, while 114 others were discharged.

Across the state, long-term care (LTC) centers have reported 1,441 cumulative outbreaks of COVID-19, and 199 are dealing with an active outbreak. LTCs account for 55,041 infected patients and staff in New Jersey, or 6.2 percent of total cases.

That includes 32,870 residents and 22,171 staffers sickened by the virus, as well as 8,037 lab-confirmed resident and staff deaths (35 percent of the statewide confirmed total), with facilities self-reporting 144 staff deaths.

Of 615 veterans residing in three state-run homes, 456 residents have tested positive for COVID-19, and 156 have died from complications related to the virus. Three hundred veterans have recovered from the virus.

The facilities at Menlo Park, Paramus, and Vineland are staffed by 1,344 workers, three of whom are presently COVID-19-positive. The facilities have sustained two staff deaths related to the virus.

The governor again expressed his displeasure with the number of LTC outbreaks attributed to staff infections, describing it as “one of the few areas that, frankly, is somewhere between frustrating and angering for us.

“At a certain point, our patience runs thin on that,” Murphy said.

Since August 1, 2020, 270 COVID-19 outbreaks encompassing 1,198 individual cases have been traced to schools in all 21 New Jersey counties. In Camden County, 17 outbreaks have been linked to 76 cases, fifth-most in the state.

Across New Jersey, 7.652 million COVID-19 inoculations have been administered.

Throughout the state, 3.631 million people are fully vaccinated, having received either a one-shot formulation from Johnson and Johnson or both doses of the two-shot Pfizer or Moderna vaccines.

In Camden County, 426,245 doses have been administered; seventh-most in the state.

An estimated 357,974 New Jersey residents have received a vaccine dose outside of the state, of which 162,349 are estimated to have been fully vaccinated.

The state is working to make access to vaccinations easier to come by, facilitating walk-up vaccinations at its vaccine megasites—no appointments necessary—and incentivizing inoculations with free beers at participating craft breweries through the statewide “Shot and a Beer” program.

Mutated offshoots of COVID-19, or “variants of concern,” continue to circulate throughout New Jersey; the state has traced 3,655 such cases to date. 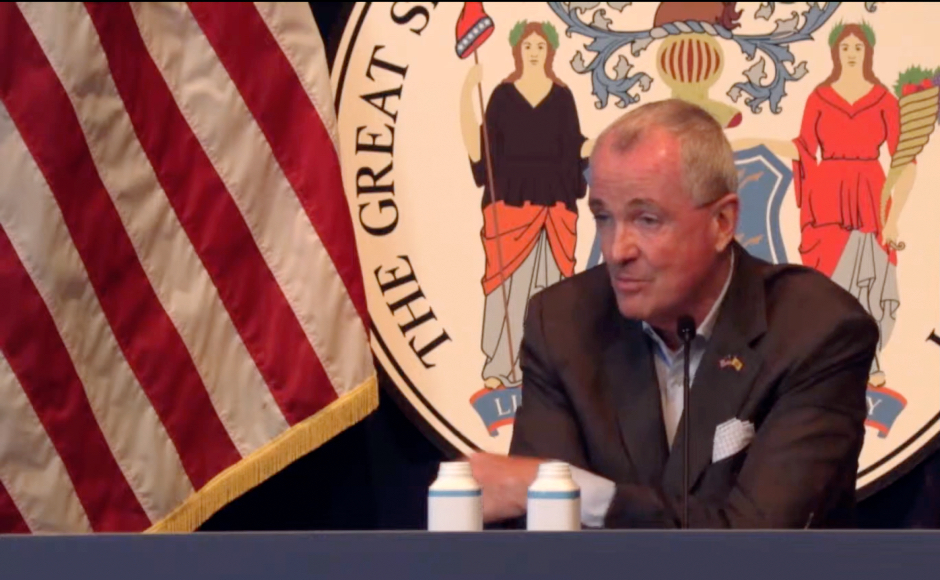 For months, the state has set a target of vaccinating 4.7 million adults, or 70 percent of the statewide population 16 and older, as a threshold for beating back the pandemic.

With an eye to the end-of-month Memorial Day weekend as the unofficial kickoff to summer, “we’re going to have to scrap to get there,” the governor said.

Even after the threshold is cleared, Murphy said the state would continue to press for additional vaccinations to continue to mitigate its risk, including awaiting guidance for potential vaccines for children younger than 16.

“No one knows yet: is this an annual flu shot, or does this look like a once-in-a-lifetime [shot]?” the governor said. “[Is it like]  tetanus, every 10 years?”