Anonymously authored letters urging parents to opt their children out of sex and gender education, social-emotional learning, and the studies of the impact of race on culture and history were distributed by hand outside of every school in the district Thursday. 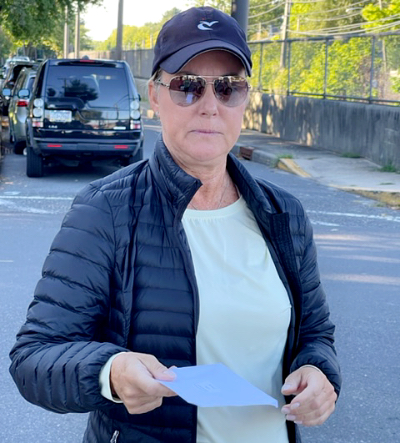 The 2022-23 school year is only three days old, but in Haddonfield, objectors to the public-school curricula wasted no time taking their message directly to parents in the borough school district.

On Thursday, residents dropping off their children to neighborhood schools throughout the borough were confronted by strangers handing them sealed envelopes labeled with an ominous message:

“Concerned about what YOUR children are being taught at Haddonfield schools? Look inside. (For Parents Only),” the envelopes read.

Within each was a three-page, unsigned letter railing against the district educational standards in alarmist rhetoric, condemning their treatment of topics like sex education, social-emotional learning (SEL), critical race theory (CRT), and gender studies.

“We believe that parents — not the government — should decide when THEIR OWN children are ready for discussions of this nature, and how best to approach these discussions,” the letter reads, expressing concern that “teachers should not be forced to teach non-academic material with which they may be uncomfortable, or oppose.”

The final pages of the document comprise an “alternative opt-out form,” which like-minded parents are encouraged to employ to prevent teachers from “usurping education about a breadth of topics which are usually best taught by parents in the home.”

The long list of topics from which parents are invited to opt out includes “sexual activity of any kind whatsoever,” “transgenderism or gender identity,” “LGBTQ+ and all of its components in every subject,” “critical race theory, whether labeled ‘critical race theory’ or not,” and “(SEL) Social Emotional Learning, or any similar construct which attempts to displace parents as the primary teachers of values and social norms.”

A secondary form included with the letter purports to offer parents the opportunity to reject referrals of their children to counselors, health professionals, and social workers for the purposes of discussing sexuality “or any of the topics to which I do not consent.”

Another claims to give parents the right to opt their children out of demographic data collection, surveys about their beliefs on a variety of topics, or advertisements in common areas for “sexuality-related (including LGBTQ+) displays,” like flags, posters, or advertisements for clubs that might discuss the same. 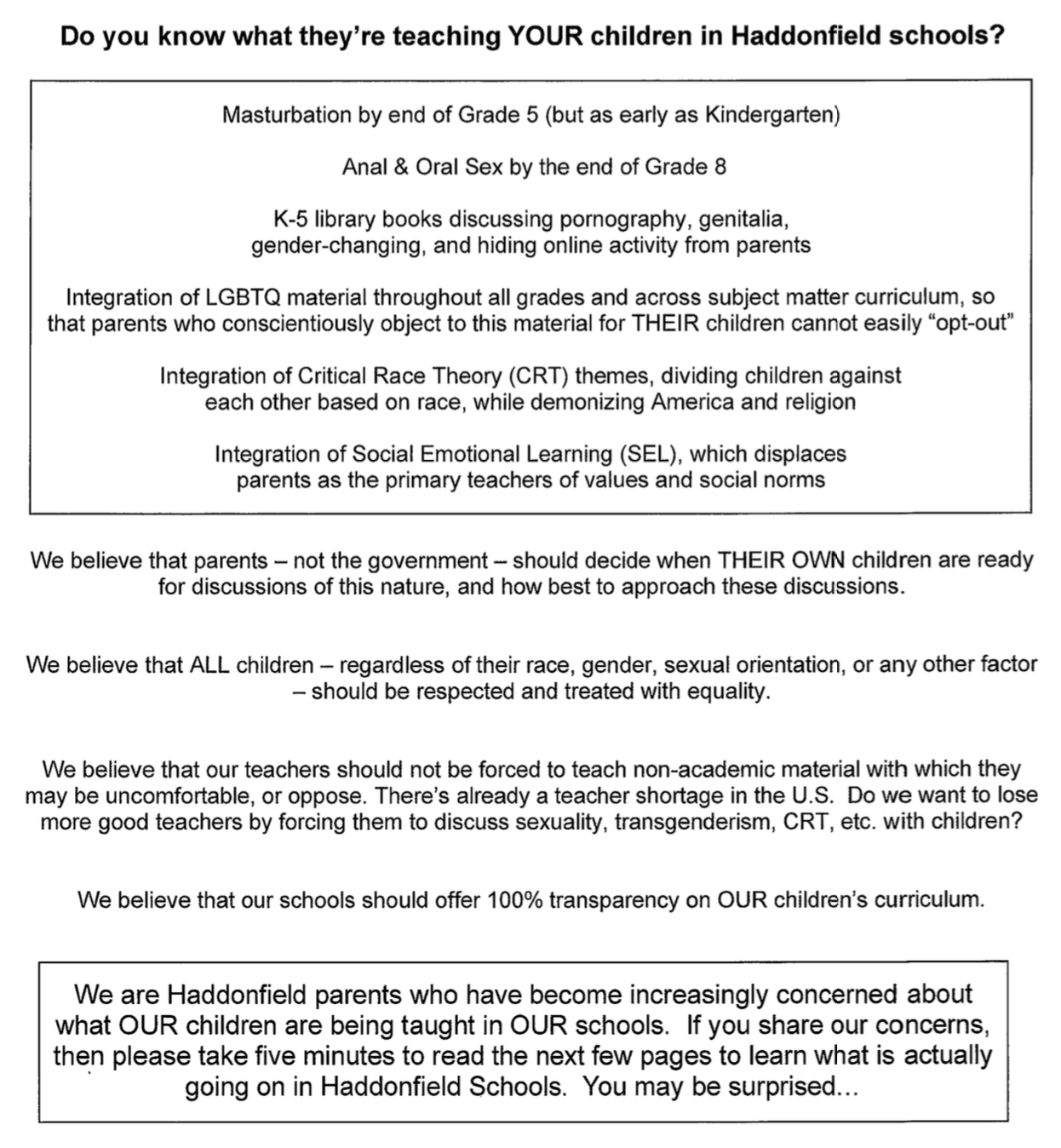 The first page of an anonymous letter sent home with parents in the Haddonfield School district.

‘We just don’t want this taught in school’

In at least one instance, however, the authors of the letters — who have not yet stepped forward to take credit for their work — were forced to reckon with the personal impact of their tactics.

A Haddonfield parent, who shared their story on condition of anonymity, said that while dropping off their child at school, they were approached by a man who handed them an envelope. After a quick scan, the parent gave the letter back on the spot.

“I saw ‘sex education in schools,’ and I knew it was some type of rhetoric,” they said. “I said, ‘No thank you sir, we are a gay family.’

“His response was, ‘We’re not against you, we just don’t want this taught in school.’”

The parent said they’ve felt the sting of homophobic behavior throughout different parts of the country, but that Haddonfield had been a haven from those persecutions.

“I do know discrimination,” they continued. “I have experienced hate my entire life. My children haven’t. I am open to you hating me anywhere. Not when my kid is right there.”

As distressing as that moment was, the parent said it’s an outlier in a decade of otherwise-welcoming experiences in the borough. The response from the district, fellow parents, and their neighbors affirmed that perspective.

“Haddonfield is an extremely inclusive community,” the parent said. “In the 10 years that I’ve lived there, never once have I felt anything other than welcome.

“Other parents were not taking the pamphlets,” they said. “They were offended by them. They saw that I was upset.

“The school showed love and support. They’re not in any way at fault.

“I felt more supported walking away from there today than I did the day before,” the parent said.

Haddonfield Board of Education President Jaime Grookett condemned the incident in a written statement.

“I’m disheartened that, on the first full day of school, a group of community members took the opportunity to disseminate misinformation and propaganda to our parents, and, in some cases, directly to our students,” Grooket wrote.

“On what should have been a day filled with excitement and enthusiasm, many parents and students rightly felt hurt, scared, and confused by these actions.”

Grookett also voiced her “support and appreciation to our teachers, administrators, and staff who devote their professional lives to our kids,” and who were left with the task of keeping students focused after a disruptive morning.

“As we continue to focus on nurturing, inspiring, and empowering every learner, we recognize that our individuality and uniqueness are gifts,” Grookett said. “Please know you are celebrated and appreciated in our buildings, and together, we can make this our best school year yet!”

Chrissi Miles, Director of Professional Development and Instructional Issues for the New Jersey Education Association (NJEA), described the critique presented in the anonymous letters as “intentional disinformation,” to which her organization has found itself responding “very frequently.”

“This is one of those situations where a small, very loud minority is trying to influence the instruction for the greater population,” Miles said. 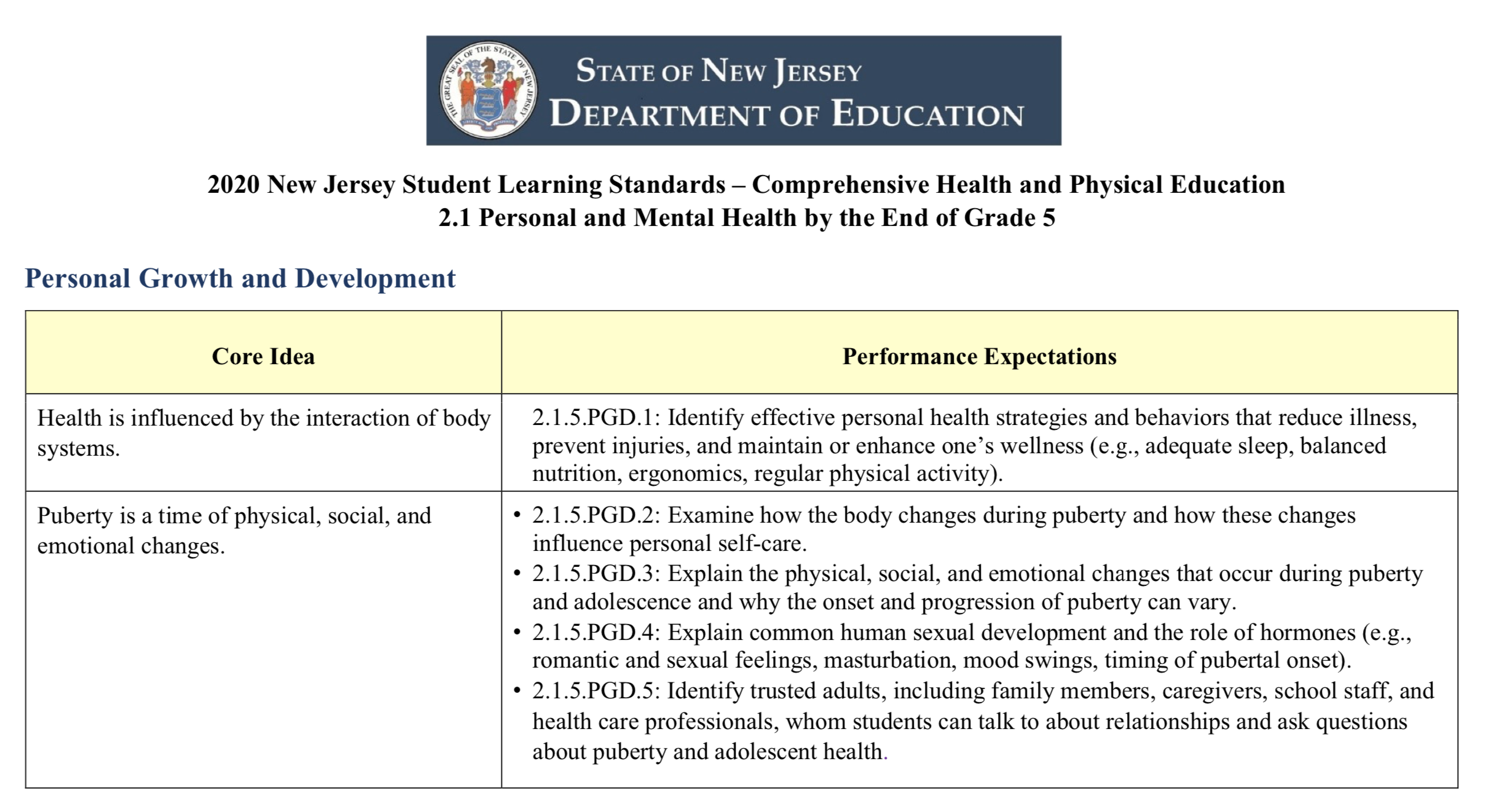 Miles said the purpose of educating young students about human sexuality isn’t to titillate or instruct them in the mechanics of sexual intercourse, but rather to help them develop appropriate vocabulary and an understanding of their own bodies.

“The whole core idea is that puberty is a time of physical, social, and emotional changes,” she said. “It’s really about teaching a time when a child’s body is changing.

“There’s a lot of research around introducing students into what’s good touch and bad touch; all these ideas help to prevent a lot of abuse against children,” Miles said. “Kids need to know the language of their body parts so they can effectively communicate when something’s happening, and so they can be safe.”

Moreover, the need for this kind of education in school is because “parents don’t always feel comfortable in those conversations, or have the language to teach children what’s going on in their own bodies,” Miles said.

“It’s a core progression, and we want to make sure we’re not being quiet about the ways our bodies work because we have to navigate the world in our bodies,” she said.

(The bill synopsis specifically mandates only that school boards “include instruction, and adopt instructional materials, that accurately portray political, economic, and social contributions of persons with disabilities, and lesbian, gay, bisexual, and transgender people.)

“It’s about who you are and how that influences the work you do,” Miles said. “It erases a part of someone’s identity if we only talk about what they’ve done and not who they are. If we erase folks and their identities, then our students aren’t able to see who they are, and what their own futures could be.”

Miles also objected to the notion that Social Emotional Learning (SEL) could somehow usurp parents’ moral authority over their children. That curriculum is designed to help students verbalize their feelings and experiences, the better to resolve their differences and regulate their emotions — none of which challenges parental rights.

“SEL is going to be one of those huge factors that helps with the mental health needs of our students,” she said. “It’s thinking through the appropriate ways to interact with one another; to understand someone’s lived experiences, and value that.

“SEL disrupts trauma that comes from one generation to the next,” Miles said. “It’s about understanding those components and making sure that the way we operate through the world is not so individualistic.” 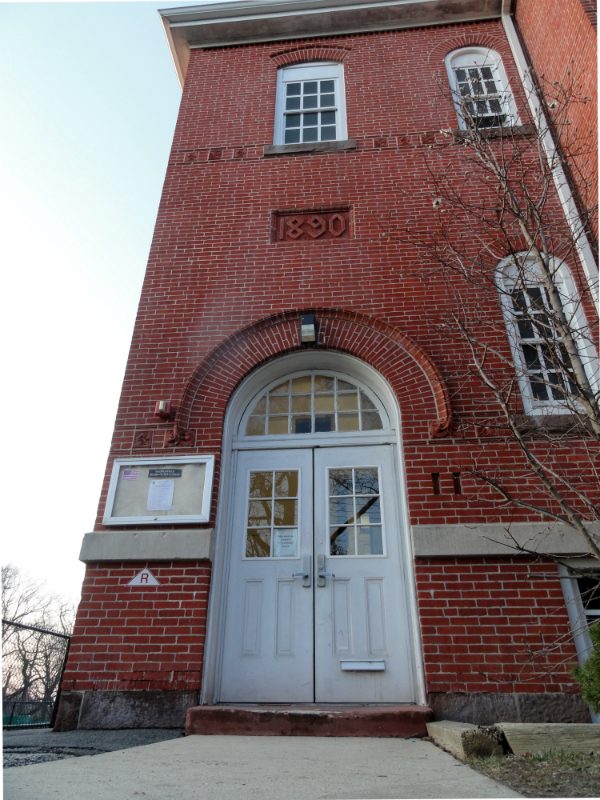 Stacey Brown Downham, who teaches English, reading, and special education in the Haddonfield school district, said that unfortunately, the people most affected by criticisms of the district education standards often are the students those standards help to protect at a vulnerable time in their lives.

“You cannot say that you don’t want your children to learn about the existence of their classmates and their families,” Brown Downham said.

“Public schools are not in the business of erasing whole groups of people.

“That’s not something that we as an education association would ever agree to,” she said.

As the teacher advisor for the Gender Sexuality Alliance at Haddonfield Memorial High School, Brown Downham said curriculum that describes the struggles of marginalized people “is not only essential, it’s life-saving.”

“Tenured teachers, I believe, have an obligation to do what is right, even if it isn’t popular,” she said. “We say that pledge every morning: ‘with liberty and justice for all,’ We have a position of privilege to maximize and protect our students.

“This activity is taking our time and attention away from the time that we have to work with students and prepare curriculum because we’re having to figure out how to support our marginalized students and families against these misaligned attacks,” Brown Downham said.

“First, we want to clearly state that the documents in question were intentionally misleading and inflammatory,” it reads. “We are especially distressed that false information is being willfully shared for the sole purpose of spreading doubt and fear. We are open to opposing viewpoints, but we dismiss inaccuracies.”

The letter includes links to documentation that outline specific curricular updates and presentations to the Board of Education, and concludes with a statement of support for district faculty and staff.

“Our teachers and staff support ALL students,” the letter reads. “They are guided by state standards, but they determine how information is delivered. We believe that the majority of our district families are equally confident that Haddonfield teachers approach all interactions in an age-appropriate and effective manner.”