Voorhees couple Matt and Wendy Davis are taking their successful online business live in a new brick-and-mortar location in Haddonfield. 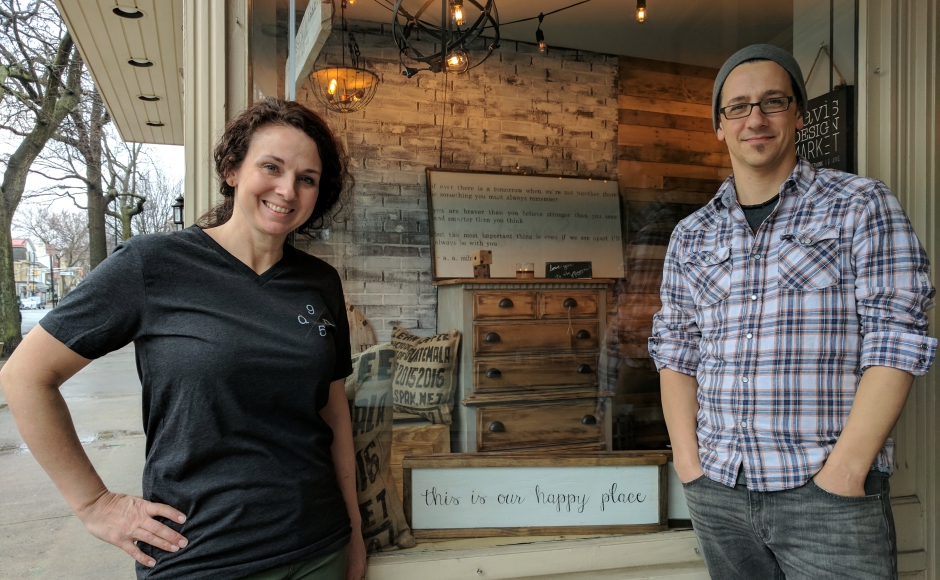 When her children were young, Wendy Davis would sew diaper bags and pillow covers from reclaimed materials as she raised them.

When she and her husband Matt started flipping houses in Oklahoma, they moved on to interior design work.

After that wasn’t diverse enough to hold their interest, the couple realized they had the skill to produce their own retail-quality pieces, and founded an Etsy.com shop to carry their own line of products.

As their tagline, “Reclaim, Rethink, Revive,” suggests, the Davises specialize in restoring vintage furniture or creating new pieces from reclaimed materials. Working with contractors and rehabbers allows them to pick up items that often come with a bit of history that they try to highlight in the finished products.

“We enjoy bringing new life to old things,” Matt Davis said; “taking something that somebody is willing to throw away and say, ‘Not yet,’ and make something great out of it that can continue.” 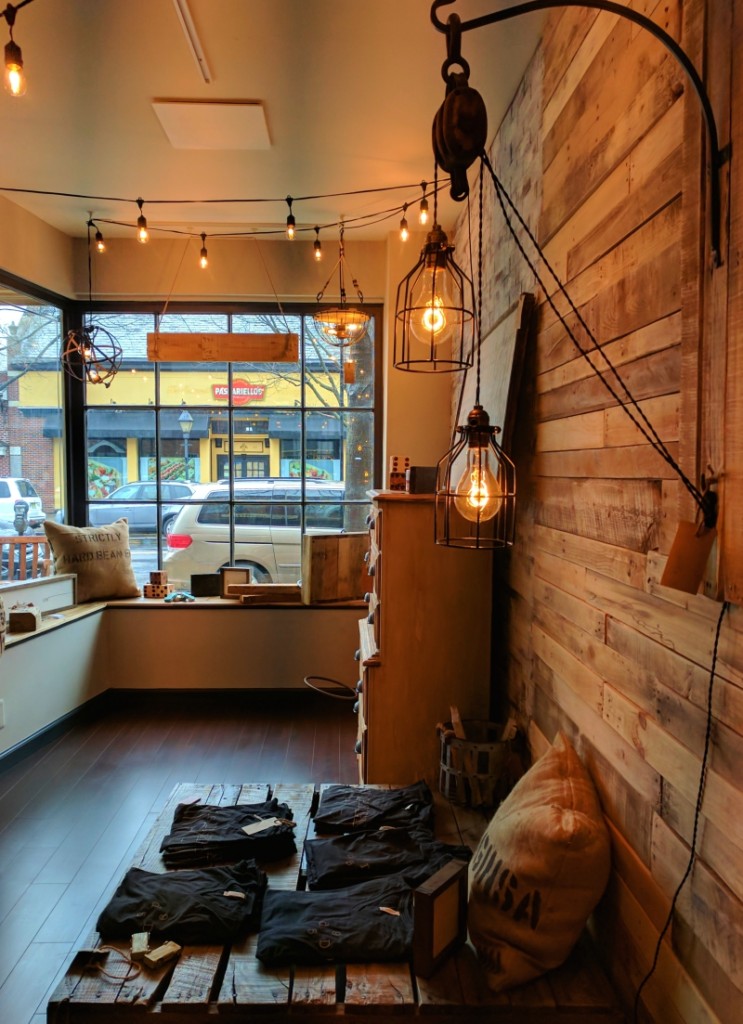 The brick-and-mortar storefront allows the Davises to show off their interior design skills as well. Credit: Matt Skoufalos.

The Davis Design aesthetic leans rustic and industrial, with wrought iron and wood elements, and the inventory at their Kings Highway storefront comes in at a variety of price points.

The shop itself also functions as a showroom for the couple’s interior design talents, with exposed brick and salvaged barn wood walls.

“Our whole lives we were self-taught, and we learned simply because we were unafraid to figure it out,” Matt Davis said.

The couple is well-traveled and well matched.

Teenage sweethearts in their native Kansas, both studied world mission and biblical theology in college, and spent 16 years in full-time ministry, following their calling to Oklahoma, Missouri, and Pennsylvania before Matt Davis took a managerial job with a wireless retailer.

In December, his position was eliminated after a corporate merger, but the family decided to stay put in their Voorhees home rather than uprooting their five children.

“They’re the motivation,” Matt Davis said. “They’re why we’re doing this. We’re not working less, but what’s great now is we’re doing it together.”

A brick-and-mortar storefront is something of a leap of faith for the family business, but the couple has entrusted so much of their lives to going where they felt they were led that the choice just made sense. 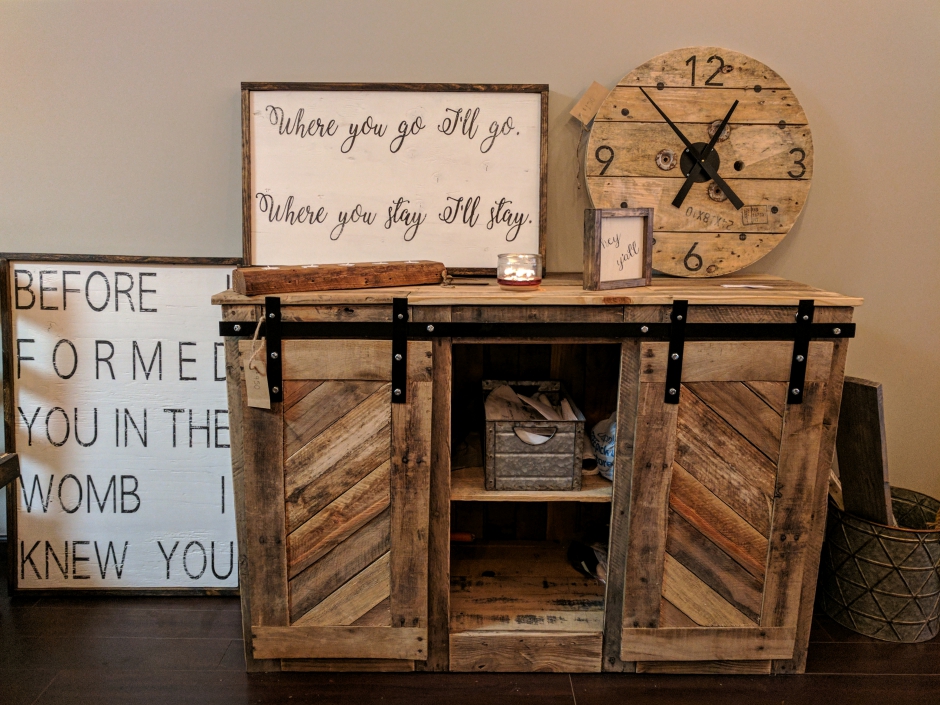 “When I was let go, we thought, ‘We’ve had enough hard knocks and learned enough that we can just jump in,’” Matt Davis said.

An appearance at the Collingswood Farmers Market last summer planted the seed of the idea in their heads, but the couple also got a nudge in the right direction when they were contacted by HGTV producers to appear on a show called Flea Market Flip (which airs on the Great American Country Network April 9).

“It was a lot of fun,” Wendy Davis said. “We figured what better way to launch it than ‘As seen on HGTV’?”

In scouting locations, they considered both Collingswood and Haddonfield for their lively downtown shopping districts, ultimately settling on Haddonfield when the right storefront opened up at the right price.

“Before we were here, we were customers,” Matt Davis said. “We used to walk the streets of both towns. We said, ‘Hey, this feels like us.’”

The prospect of launching the business is at once both frightening and encouraging. Balancing the demands of family and the existing, online shop was made more challenging by opening the storefront during a slow retail season. In addition, Matt and Wendy Davis continue to volunteer at least 10 hours a week with their congregation at Kingsway Church in Cherry Hill. 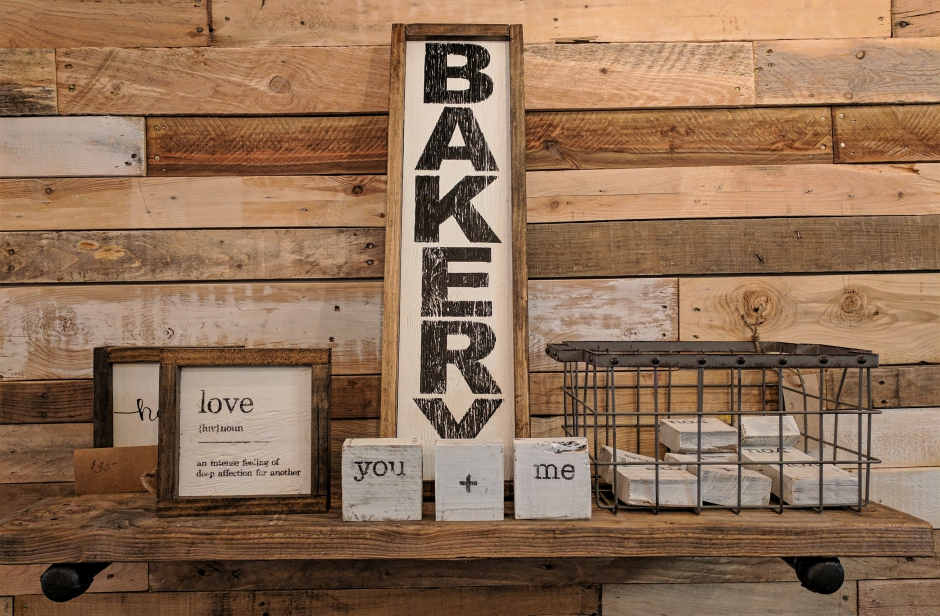 At the same time, the Davises say they’ve felt supported by customers who have emerged to offer encouragement, who have brought in family heirlooms for restoration, or who’ve simply visited the shop to offer a kind word.

The value of giving back continues to permeate their plan for the business as well: they want to introduce First Wednesday workshops to help teach customers some of their favorite techniques. Also on the horizon: in-store acoustic performances and an expanded consultancy business.

“I envision growing beyond this space and being able to diversify a little bit more in what we do,” Wendy Davis said.