The week was broken up by a ceremony honoring retiring greats Eric Lindros and John LeClair, but tougher tests lie in the week ahead. 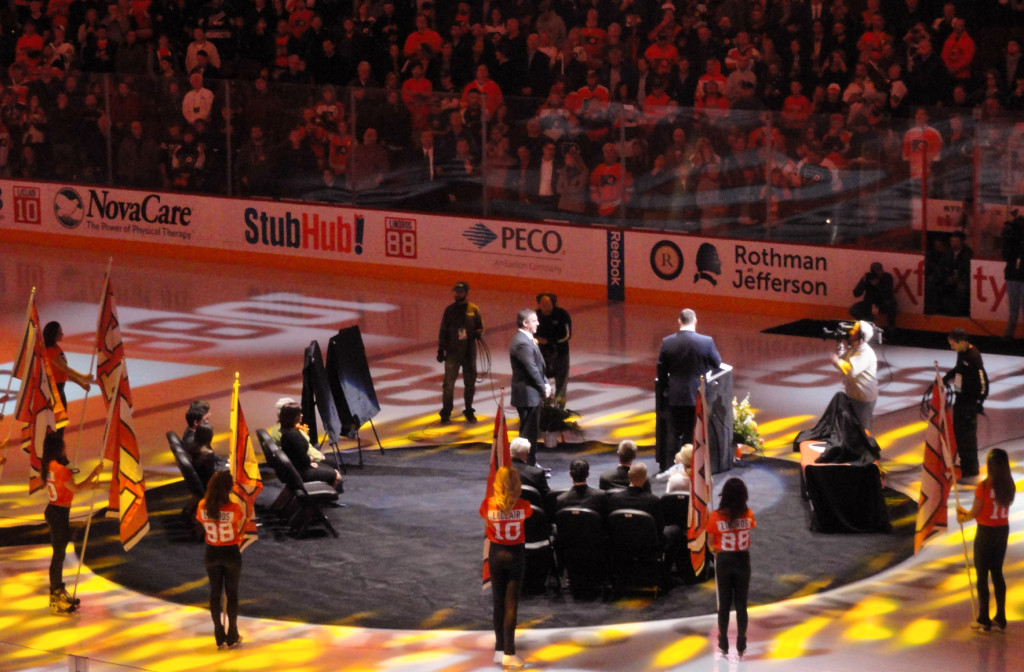 LeClair and Lindros were inducted into the Philadelphia Flyers Hall of Fame. Credit: Matt Skoufalos.

It took a week, but the Philadelphia Flyers finally beat the Columbus Blue Jackets.

In between those contests, however, the orange-and-black dropped two additional games to teams at the top of their conference and failed to close out a visiting Minnesota Wild team in the final seconds of a night honoring Legion of Doom linemates Eric Lindros and John LeClair.

The losses still leave the team a game under the .500 mark heading into a stretch in which they play four games in six nights against some tough opponents.

The action starts with a Monday night test against the streaking Islanders, who sit tied with the Pittsburgh Penguins for most points in the Metropolitan Division.

That will be followed by a Thanksgiving Eve tilt against the Detroit Red Wings, currently in the lead for one of two wild-card spots in the playoff picture, and a home-and-home against the New York Rangers—a team against which the Flyers have dropped nine of their last 11—on Friday and Saturday.

But unless the Flyers are able to stabilize a defense that has been plagued by injuries and inconsistent goaltending, it’s easy to presume that the squad will be in a dogfight for every point moving forward. 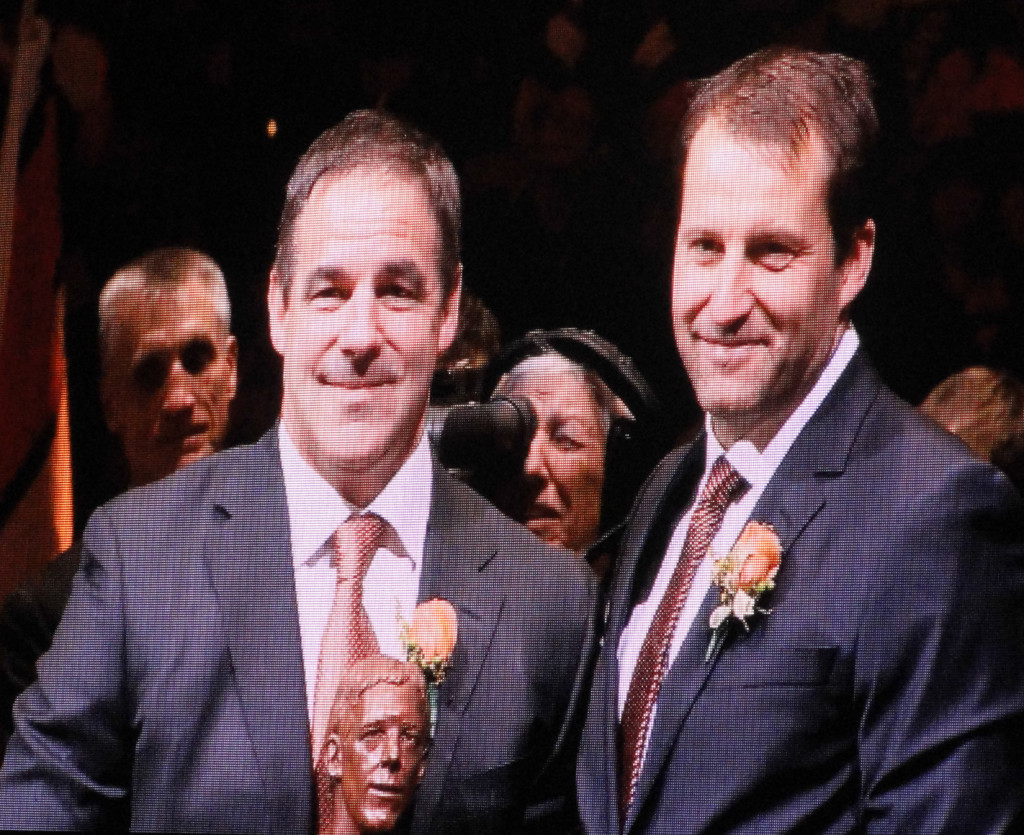 LeClair and Renberg reunited for the former’s induction into the franchise hall of fame. Credit: Matt Skoufalos.

Coming back against Columbus

The Flyers got off to a good start, scoring the game’s first goal less than three minutes in.

Voracek snapped a shot from the edge of the circle that Brayden Schenn deflected past ex-Flyer goalie Sergei Bobrovsky.

The goal marked only the sixth time all season that Philadelphia registered the game’s first goal. The orange-and-black are a different team when leading first, going 5-0-1 in those six games this season.

Penalty trouble reared its head again soon, however, and Blue Jacket forward Boone Jenner tied the game on the power play after a long, East-West pass from defenseman James Wisniewski.

But before the period was out, Mark Streit put the Flyers back on top, burying his own rebound for a goal on which Giroux assisted, tallying his 400th career point.

After taking three penalties in the first, the Flyers stayed out of the box for the rest of the game. Philadelphia dominated the second period, outshooting the Blue Jackets 18-4 while extending their lead on the power play. Voracek’s initial shot was stopped, but when the rebound went airborne, winger Wayne Simmonds caught it, dropped it to himself, and snuck it past Bobrovsky.

Columbus grabbed a goal early in the final stanza from Matt Calvert on a two-on-two rush, but the Flyers thwarted that effort almost immediately. Within a little more than a minute, Braydon Coburn scored from the point on a play during which Bobrovsky lost his stick, putting the Flyers up for good, 4-2.

In the final 16 minutes, the Flyers buckled down defensively, allowing only five shots in their eighth victory of the season. Goalie Steve Mason deserves credit for shutting down 20 of the 22 shots he faced. 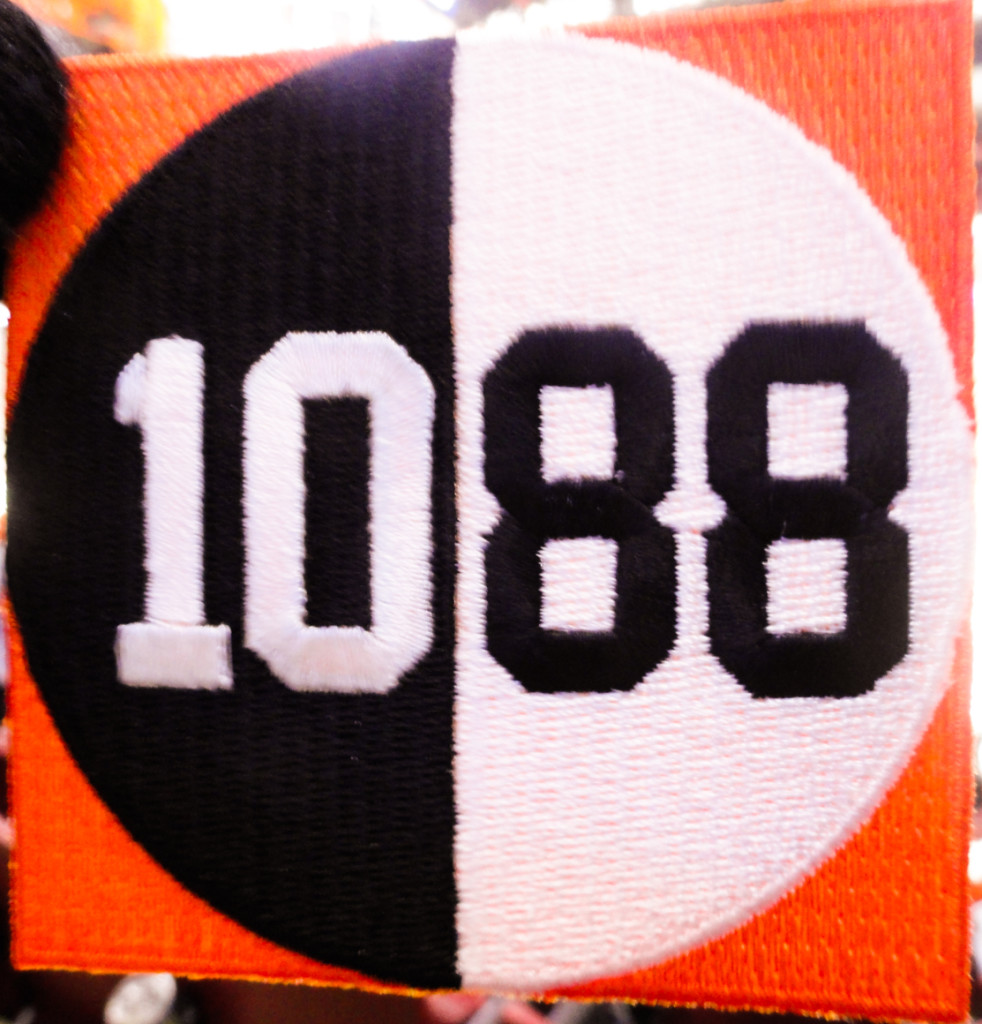 Former Flyers Eric Lindros and John LeClair joined the ranks of the franchise Hall of Fame Thursday, but it was the visitors from Minnesota who spoiled their party with a last-minute goal from Jason Zucker.

After a first period in which the Flyers outshot their guests 14-6, the home team was nonetheless stymied by excellent play from Minnesotoa goalie Darcy Kuemper, who made 39 stops in total on the night.

Halfway through the second, Ray Emery surrendered the opening goal on a one-timer from Nino Niederreiter.

Mark Streit knotted the game up little more than three minutes later when Vinny Lecavalier found him jumping up in the play for his third of the season, but that lead didn’t hold up, as a bomb from Marco Scandella put the Wild back up, 2-1, in the early third period.

Strong play from Philadelphia was rewarded with a late-game power play, however, and Claude Giroux cashed in with his sixth of the season on a one-timer from the circle, tying the game with 3:30 to go.

Alas, it was not to be. With under a minute to play, Andrew MacDonald, who returned to the lineup after missing almost a month with a lower-body injury, turned the puck over behind his own net. The resulting defensive zone pressure led to Zucker slipping by winger Matt Read, and ultimately, potting the go-ahead goal on a back-door shot with just 45 seconds remaining.

The fans were treated to some kind remarks from the greats in a pregame induction that seemed overdue for both Lindros and LeClair, two of the most dominant players of their era. It was the first time the Flyers had a joint induction into their Hall of Fame, and the trio was rounded out by their linemate, Mikael Renberg, who rejoined the duo for the presentation of their commemorative busts.

“To the best fans in the NHL, you guys are awesome,” LeClair told the crowd. “Win or tie you were always behind us, and that’s what I loved about playing here. You didn’t accept losing, you demanded the best from your team, and that relentless enthusiasm and passion for the game was a contagious energy I felt every time I stepped on the ice, and I want to thank you for that.

“I gave Philly my best hockey, and I hope you feel the same way too,” he said. “We will be forever incredibly proud and honored to have played for the Philadelphia Flyers.”

LeClair’s three consecutive 50-goal seasons is a feat equaled in franchise history only by Flyer winger Tim Kerr, while Lindros was only the second Flyer to win the Hart Trophy (NHL MVP) and the first since Bobby Clarke did. Both Lindros and LeClair led the Flyers to three Eastern Conference Finals and one Stanley Cup Final appearance.

“To this day and forever more, it is so easy to say the Philadelphia Flyer fans are one of a kind,” Lindros exclaimed.

“Night in and night out, you guys brought passion and energy to the Wells Fargo center for every game. We felt you, we played for you, and whether it was a chat on the street or down an isle in a grocery store you couldn’t get away from this energy. It was fantastic, it was everywhere.”