After an 0-2-2 start, the Philadelphia Flyers took seven of the next 10 games to right the ship. Here’s how they did it. 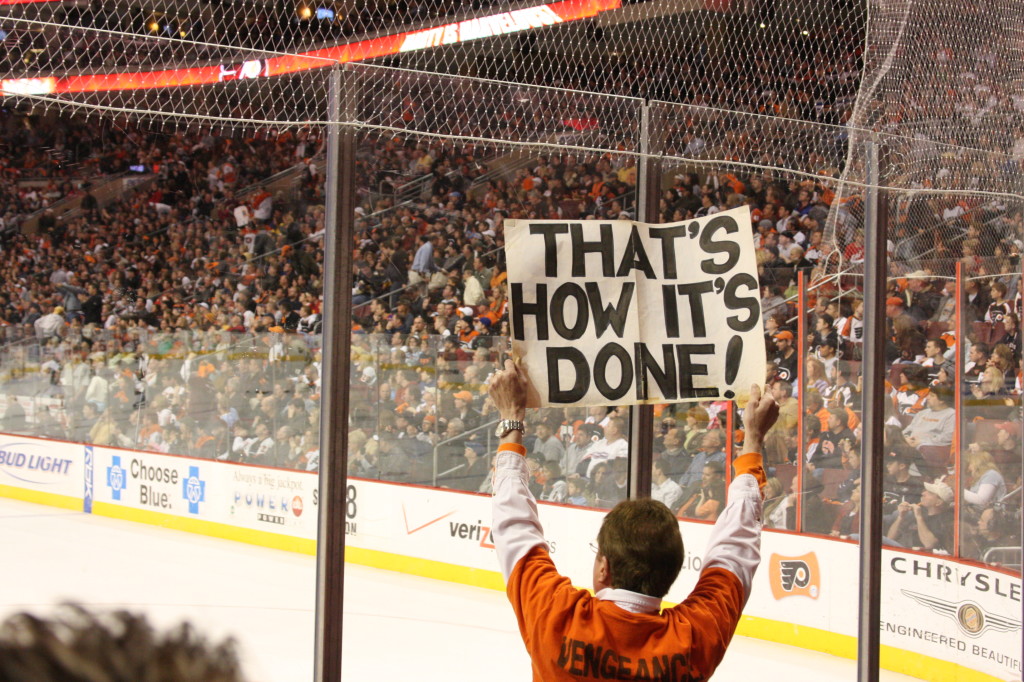 The Flyers are back on track. Credit: Melody Joy Kramer: https://goo.gl/wqJr7o.

After waiting five games for their first win in 2014, the Flyers now find themselves in third place in the Metropolitan Division, boasting a 7-5-2 record (14 points).

Here’s how they got back on track.

1. Czech Plus
The emergence of top-line winger Jake Voracek has been nothing short of spectacular. Voracek has picked up points in all but one game this season. The consistency shown by the Czech Republic native has given the Flyers some important secondary scoring beyond captain Claude Giroux, although the two are linemates.

To put it in perspective, Voracek has picked up 22 points in 14 contests, averaging 1.6 points per game. He’s taken two or more shots on goal in all but one game, averaging 3.5 shots per game (second only to Giroux). Voracek has also been a plus or even player in all but two games this season.

The 25-year-old has even played well in games the Flyers have not won, picking up seven points in seven losses. Voracek’s 22 points are second in the entire NHL, behind only to Sidney Crosby.

2. Razor Sharp
The stable play of backup goalie Ray Emery has been essential to the Flyers’ turnaround this season. Emery stepped in for Steve Mason after the starter allowed four goals on 18 shots in a game against Dallas on October 18. The change sparked the Flyers, who were down 4-2 at the time, and they ultimately came away with a 6-5 overtime victory–more importantly, their first W of the season.

Mason was put back in the next game, and Philadelphia suffered a 4-0 shutout. The loss could hardly be blamed on Mason, but the Flyers needed a spark. Emery got the next start and played very well in a win over the rivaled Pittsburgh Penguins. Emery went on to start and win three games in a row, which put the Flyers over .500 for the first time in the season.

Emery’s four starts in a row helped the Flyers turn around their season while at the same time taking the pressure off Mason and letting him get back on track. After Emery’s four straight starts, Mason seems to have found his form, winning three out of four consecutive starts while surrendering only seven goals during that stretch.

3. Going Far at the Wells Fargo Center
The Flyers have excelled at home: their 5-1-2 home record is the second-best in the Eastern Conference. While at home, Philadelphia are a plus-8 in goal differential as compared with a -4 on the road. In eight home games, Philadelphia has scored 29 goals (3.63 goals per game) as compared to 16 goals in six road games (2.67 per game).

The Flyers special teams play has also been tremendous at home, especially when compared with the team’s performance on the road. In away games, the Flyers’ power play is scoring at an abysmal 10-percent rate, and its penalty kill is only effective 60 percent of the time. At home on the power play, the Flyers are three times as good (9 for 29 or 31 percent, third-best in the NHL), and killing penalties at a 96-percent rate (24 for 25, second in the NHL).

4. Wounded Warriors
The ability of the Flyers to remain successful despite the many injuries to key players cannot be overstated. Through 14 games, the Flyers already have 29 man-games lost (43 if you count Kimmo Timonen) to injury.

Seventh defenseman Nick Schultz has been very stable on the back end, averaging more than 19 minutes per game, while picking up four assists in 13 games. Schultz is also second only to Wayne Simmonds at plus-6.

Management has helped fill the gap even further; call ups Shayne Gostisbehere and Brandon Manning stepped in for two games, each doing a fine job before GM Ron Hextall signed Carlo Colaiacovo. Colaiacavo played well in his two games thus far and will jump back into the lineup next game to replace Schenn.

Pierre Edouard Bellemare has also played beyond expectations, having moved up and down the lineup, including multiple games as the Flyers’ second-line center while Lecavalier was out. The rookie has three goals this season. Despite all of these injuries, Philadelphia still has the second-most overtime and regulation wins in its division (seven).

5. Streit and Del Zotto – Two D’s in a Pod
This season, Mark Streit has been upgraded to the first defensive pairing, the first power play unit, and was given the responsibility of being an alternate captain. In his new role, Streit is averaging 23:10 per game, almost three minutes higher than last season.

So far the Swiss native has points in eight of the Flyers’ 14 games, accumulating 10 total points, and is a plus-2 on the season. Streit has only been a minus player in four of the 14 games thus far.

Michael Del Zotto, who was initially signed late in the off-season to replace the hole left by the injured Kimmo Timonen, has recently become a staple on the Flyers defense. In the seven games since Andrew MacDonald’s injury, Del Zotto has averaged 23:31, five minutes more than his 18:30 average in the first seven games of the season.

The former New York Ranger and Nashville Predator has also contributed offensively, picking up five points in the last seven games, including his first goal as a Flyer. Del Zotto has seven total points in 14 games this season.

After starting the season minus-5 through his first seven games, Del Zotto is now plus-2 after going a solid plus-7 in his last seven games, having not been a minus player in any of those contests.

Drop The Puck
The Philadelphia Flyers, who have won three in a row and are now 7-5-2, have off until Friday night, when they host Scott Hartnell and the Columbus Blue Jackets, who have lost eight straight and are a division-worst 4-9-1.