Three Cherry Hill men, two Pennsauken men, and one each from Bellmawr, Blackwood, and Glendora are among 31 charged with child sexual exploitation crimes in ‘Operation 24/7’.

Among them are eight Camden County residents—three from Cherry Hill, two from Pennsauken, and one each from Bellmawr, Glendora, and Blackwood—who face second- and third-degree charges of possession and distribution of child sexual abuse material. 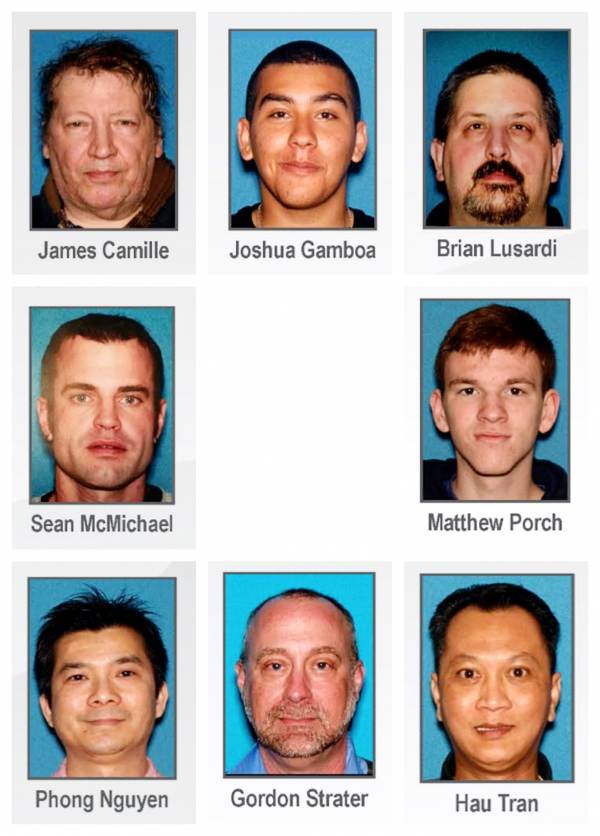 Second-degree charges carry a sentence of five to 10 years in state prison and a fine of as much as $150,000.

Third-degree charges carry a sentence of three to five years in prison and a fine of as much as $15,000.

The defendants’ alleged behaviors “revictimize those children each and every time those images and those videos of their suffering and exploitation are shared online,” Grewal said.

Those charged range in age from 18 to 65, and were brought in by a multi-agency task force that included the state Office of the Attorney General (OAG), federal investigators from the U.S. Department of Homeland Security,  and those from seven county prosecutors’ offices.

“Those exams will reveal whether the devices contain other evidence, particularly evidence of any other encounters with underage victims,” Ruotolo said.

“We are sending a message to sex offenders: if you prey on our children, we will arrest you,” she said. “There can be no higher priority than protecting our kids.”

New Jersey State Police Colonel Pat Callahan urged parents to take an active role in monitoring their children’s online behavior, and in recognizing the differences in how child sexual predators present in the digital age.

“Traditionally, you think of that predator lurking around a playground with a bag of candy and a puppy,” Callahan said. “It is different in 2021. When these children are victimized by these heinous crimes, that sometimes comes with a lifelong struggle in dealing with that victimization.” 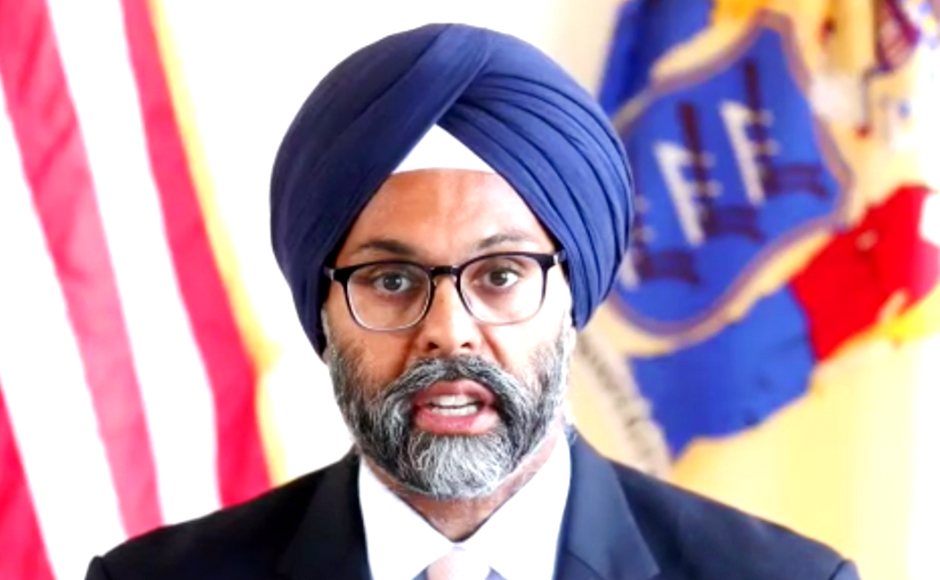 Jason Molina, Special Agent in Charge of the Newark Field Office of the U.S. Department of Homeland Security, said online predators commonly work to “build that rapport, build that trust,” with their would-be victims to make them feel as though they’ve been befriended.

That practice, known as grooming, sets abusers up to “ease into further ways to exploit the children,” Molina said.

“It’s all about building that rapport with that child, and trying to extort them,” he said. “Then it can turn into extortion and blackmail once those images are shared.”

When children are exploited into sharing images of themselves online, often they can become re-victimized, as those who’ve received the images may blackmail or shame them into doing more of the same, or worse.

“We often hear that the child complied because they’re simply terrified that the parents might find out about the first incident, so the cycle continues,” said Camden County Prosecutor Jill Mayer.

“It’s important to have open honest and frank discussions with children about their online activities,” Mayer said. “But it’s even more vital that you maintain the type of relationship with your children so they feel they can come to you if approached by someone online or if they’ve fallen victim to an online predator.

“Make the children understand that you are their safe space, and you are there to help, and there’s no situation that you cannot handle together no matter what has already occurred,” she said.

The 31 men whose arrests were announced Wednesday join another 21 arrested last summer in a similar sting called “Operation Screen Capture.” Grewal said the increased risk of the online sexual predation of children “was clearly linked to the COVID emergency and the fact that people were spending more and more time online.” 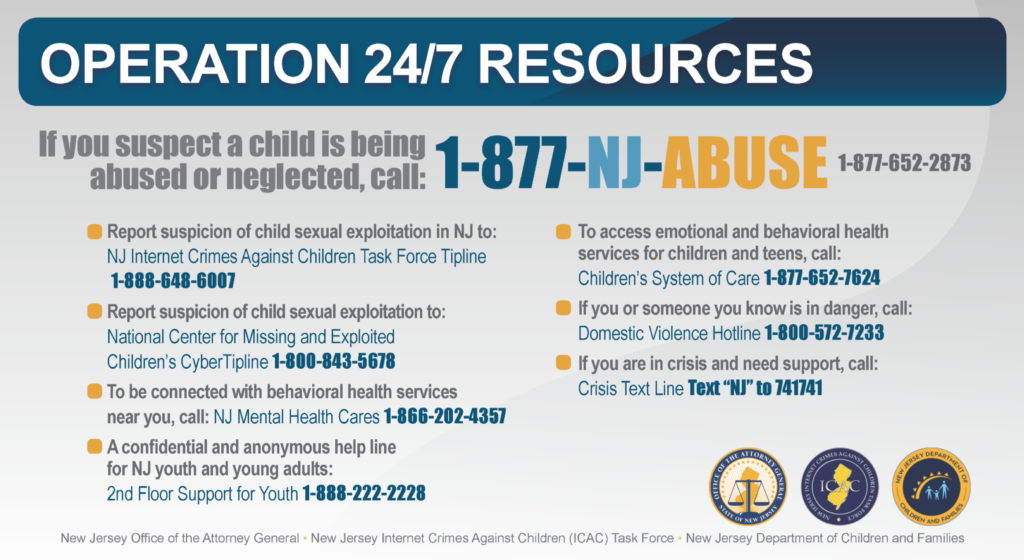 The New Jersey Regional Internet Crimes Against Children (ICAC) Task Force has received 3,324 tips about potential threats to children online, including those from the National Center for Missing and Exploited Children (NCMEC), during the first six months of 2021, Grewal said,

“Homebound children were using their devices not only for virtual learning but for recreation,” the attorney general said. “Predators saw more opportunities to target vulnerable children online. The pandemic is not over, and tips against online threats to children are high.”

Grewal said parents should familiarize themselves with privacy settings on the apps and games to which their kids have access. 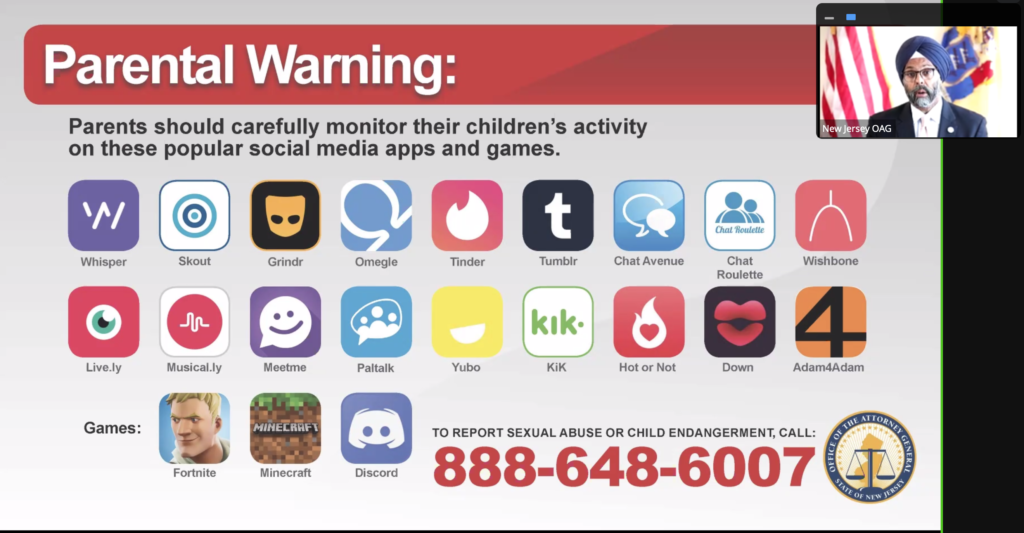 Apps that have been used to lure children. Credit: NJOAG.

“Teach your children that the people they encounter on their phones, on their devices, on their computers, may not be who they seem,” he said. Children “should be [as] wary of interacting with strangers online” as they are in real life and should avoid sharing any personally identifying information online.

Parents should also “be wary if your child is secret or protective of their phone or computer,” Grewal said.

The attorney general recommended that kids not have access to their phones or devices in their bedrooms at night, and that gaming devices should be kept in a place where they’re visible to everyone in the household.