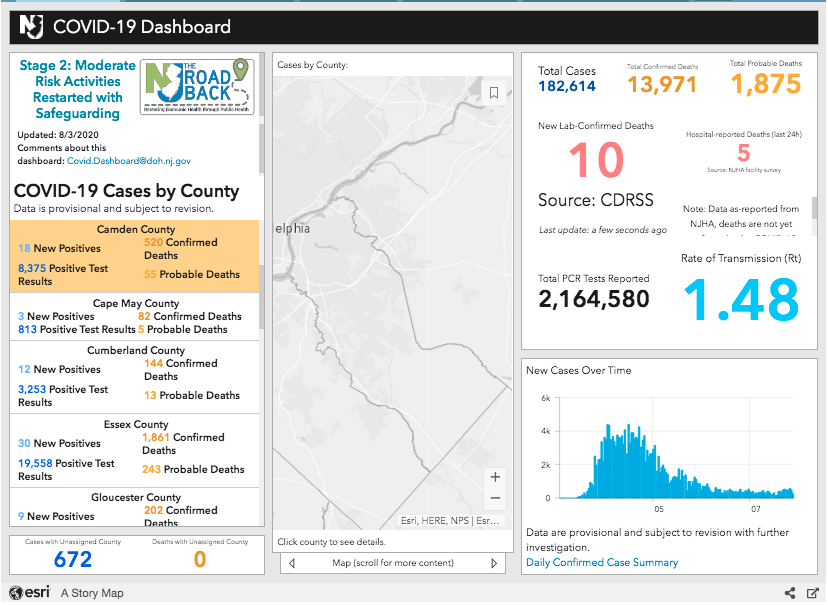 Another 103 Camden County residents have been infected with novel coronavirus (COVID-19) this weekend, and eight others have lost their lives to the pandemic, according to data from the Camden County government.

All told, 8,964 local people have been sickened by the virus, and 546 have perished from related complications.

“Our statewide transmission rate is much higher than it has been for several weeks, signaling that this virus is once again beginning to make its way through New Jersey communities at a dangerous rate,” Camden County Freeholder-Director Lou Cappelli said in a written statement Monday.

“We have to do everything in our power to stop coronavirus from regaining a foothold in our community,” Cappelli said: “keep wearing a mask, social-distancing, and avoid gatherings with large groups of people.”

Throughout New Jersey, 182,614 people have been sickened by COVID-19, and 13,971 have perished from causes related to the virus; another 1,875 deaths have been deemed to be probably COVID-19-related as well.

LTCs are believed to be associated with 58 percent, or 314 of the 538 total deaths in Camden County; 311 were residents and three were staff.

More than half the 56 LTCs in Camden County (30) have experienced at least one case of COVID-19.

According to the New Jersey Department of Health COVID-19 dashboard, on August 3, Camden County was fifth in the state in new COVID-19 cases, with 18.