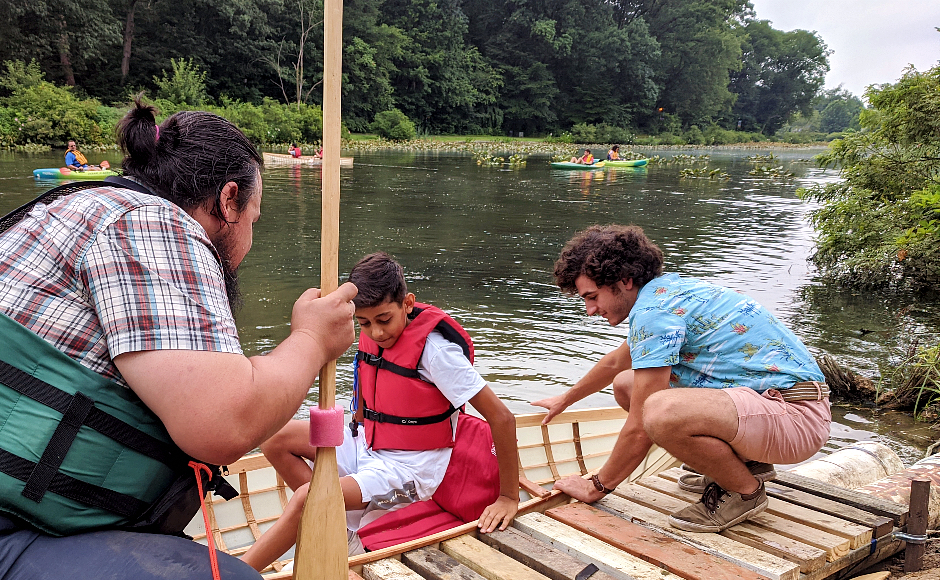 It was an overcast morning on the Newton Creek, but the crowd at its banks belied the cloudy skies and humidity.

Along Lakeshore Drive in Haddon Township’s Newton Lake Park, a crew of 30-some novice boaters from fourth through eighth grades rallied around a makeshift launching dock.

Nearby, their parents snapped photos on cell phones, and safety kayakers floated on the waterway in a protective ring.

Launching the crafts was the culmination of a month-long summer enrichment program led by Haddon Township High School wood shop teacher Jesus Castro, a veteran wooden boat-builder of some 10 years, now in his first year of teaching.

Together, Castro took the children through the construction of a 10.5-foot solo paddler they christened “Newt,” and a 13.5-foot, two-person boat dubbed, “The Magic School Boat.”

“They’re performance-oriented boats,” Castro said; “lighter than anything you’ll be able to buy at a store, and still able to take a beating.”

A union carpenter who’d worked in television set construction prior to the novel coronavirus (COVID-19) pandemic, Castro leveraged months of downtime into completing his teaching certificate. When schools reopened last fall, he used the remote learning environment to teach lessons on theoretical woodworking and global heritage. 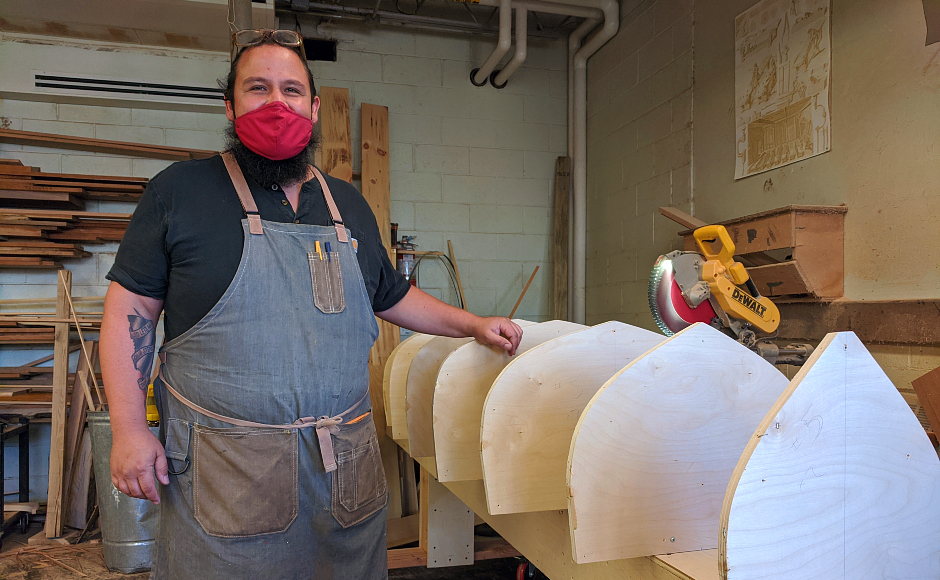 When the district solicited its teachers for summer enrichment program ideas, Castro saw a chance to educate youngsters on the use of hand tools and processes employed in crafting traditional, skin-on-frame boats.

“We have had to sneak a power tool in there once or twice, but we’re building boats that are suitable for the Newton Creek, centered around some of the history of the people in this area, and then just trying to connect recreationally to [the waterway], as it is significantly underused,” Castro said.

Boat-building techniques native to the Northern Americas predate European machinery, “and they’re really based on getting on the water,” he said. Early native kayaks were made of sealskin and carved wood or bone; the kids in Castro’s program stretched nylon skin across a series of hand-carved, steam-bent, wooden ribs.

Properly, Newt and the Magic School Boat are pack canoes in the “Wee Lassie” lineage of John Henry Rushton, who began building Adirondack boats in Canton, New York, in 1875. Their frames are fabricated from Mount Holly white oak, and are based upon patterns borrowed from Urban Boat Works, a project established at Urban Promise of Camden City.

Using newly felled wood, which boasts a high moisture content, and a wallpaper steamer to soften the lignin inside it, students have a brief window to shape the wood before it re-stiffens. The process is a one-shot opportunity for each of the 47 ribs in the two boats, and requires a great deal of teamwork.

“At about 200 degrees, [the wood] becomes really elastic for a moment,” Castro said; “as it cools down again, it re-stiffens. You get a two-to-three-minute window to shape these pieces of oak into something that gives you a pretty tight curve.” The kids constructed the frames with help from student apprentice Thomas Dezii, 17, of Haddon Township; and Haddon Township elementary school art teacher Christine Magro, who taught the children the sewing and knot-making techniques needed to affix the skins to their boat frames, and helped to waterproof them.

“There’s a weight behind a hand tool that grabs your attention,” Castro said.

“If you have a nice planer with a sharp blade, and you know what it’s capable of, I think the kids have really risen to the trust behind that.

“They’ve felt that level of trust from us and expectation that we showed them what to do, and now it’s up to them to get these boats done,” he said.

“The other cool thing with this process is it involves a lot of sewing and a lot of knot work, which can be gendered topics in our culture,” Castro said. “It’s been nice to normalize those as just craft.

“I feel like there’s been a shift in students who only wanted to sign up for woodworking tasks who have opened up to the idea of all these things being related craft skills,” he said.

Magro said she enjoyed the opportunity to teach crafting skills as much as she enjoyed learning nautical vocabulary and connecting it with her own areas of expertise.

“It was really nice to see the kids who came in knowing nothing about even woodshop in general really take ownership by the end of it,” she said. “They really stepped up to the plate. Whenever something needed to be done, they wanted to do it, and for this age group, that’s pretty cool to see.”

Dezii, a Haddon Township High School student who’s worked closely with Castro on some individual projects, said his takeaways from the experience included figuring out how to direct and support young learners.

“I got to learn a lot from Mr. Castro and a lot from the kids and how they interact with each other,” Dezii said. “It’s been nice to start my day and see them smile, and accomplish something.” 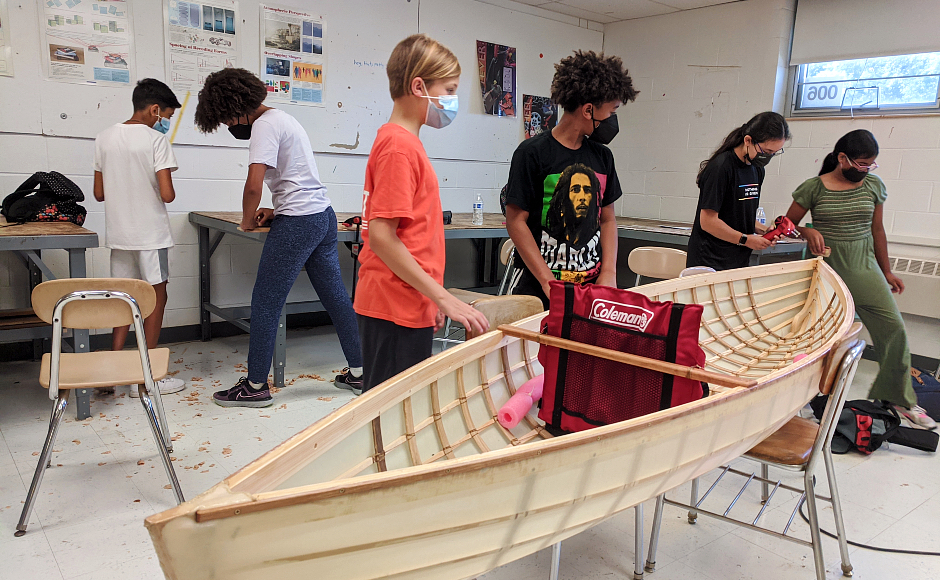 Students in the program found themselves embracing the skill-building aspects of the program as much as its social opportunities.

For 11-year-old Isaiah Thatcher of Haddon Township, the camp went from a source of apprehension to a highly anticipated activity.

“I came into the camp not really wanting to go, and honestly, I just wanted to try hiding and sleeping all day,” Thatcher said.

“But it was so fun, it cures boredom,” he said. “It’s a joyful atmosphere; we all talk to each other and have fun while we’re doing this work. I like it.

“More places should think of doing more intellectual social camps like this that make you learn more things and try something new,” Thatcher said. “I like our teachers a lot because I feel like I wouldn’t be allowed to use a hot glue gun, a hot knife, at home. I get to do a lot of stuff, and they trust me with it. It made me want to do more stuff like this.”

Sophie Fred, 12, of Haddonfield, said she went into the camp not knowing anyone else, and formed a fast friendship with 12-year-old Jyotsana Balasubramaniyam, of Haddon Township.

“I basically knew nothing about boat-building, and I learned a lot of stuff,” Fred said. “If they do this next year, I definitely will be excited to do it.” “At first I didn’t really want to go because I didn’t want it to ruin my summer,” Balasubramaniyam said.

“After the first time I went, I really liked it, and I couldn’t wait to do it next time.”

Twelve-year-old Muhammad Khan of Haddon Township said he discovered a talent for knotting when he approached the task of affixing the nylon skin to its wooden frame.

“I love that I’m actually helping with building the boat, and adding stuff to make the boat better,” Khan said.

“I love the experience because I’ve never actually been on a boat that I’ve created,” he said. “I was really excited for the boat to actually go in its full form.”