The federal funding will support the installation of sidewalks and curb cuts in areas where infrastructure is broken or missing across the community. It’s the third-largest award in the state for 2022. 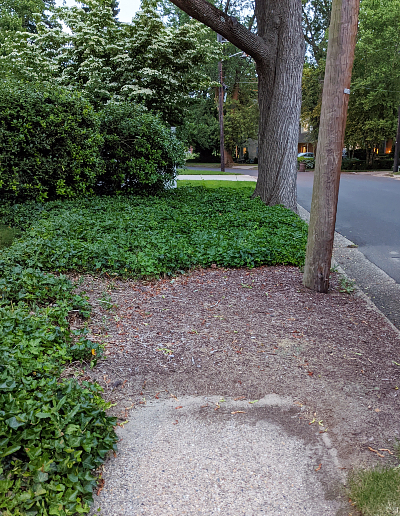 Sidewalks on Crest Avenue in Haddon Heights are either incomplete or missing altogether in spots. Credit: Matt Skoufalos.

Pedestrians in Haddon Heights can look forward to sidewalk improvements throughout the town in the coming years, as the borough landed a significant transportation grant from the federal Safe Routes to School (SRTS) program.

In a year that saw a record $19.6 million awarded to 31 SRTS projects throughout New Jersey, Haddon Heights landed the third-largest total in the state: $1.2 million.

Borough officials say they’ll use those funds to make necessary fixes to sidewalks in the neighborhoods along which children most frequently travel in their commutes to the three elementary schools in town: Atlantic Avenue, Seventh Avenue, and Glenview Avenue.

The scope of the project design should be laid out by the end of the year, said Haddon Heights Mayor Zach Houck, who is hopeful that the borough will be able to select a bidder for the work to begin next year.

Sidewalk improvements—including constructing missing or broken walkways and adding curb cuts—will be developed according to the Haddon Heights School Travel Plan, which the borough authorized in June 2018.

The plan identifies various and significant safety concerns along children’s paths to school, which include “motorists speeding, intersection and mid-block crossings, and gaps in the bicycle and pedestrian infrastructure.”

The report notes that fewer than 10 percent of the total student population at each school travel by bicycle, bus, or some other form of transportation, whereas 60 percent of students at all three schools are dropped off by car.

Some of that may be related to the distance of the commute: the report notes that 30 to 40 percent of the student population of each school lives farther than a half-mile away from it, “which makes bicycling and walking almost impossible,” and places a premium on infrastructure improvements in the plan. 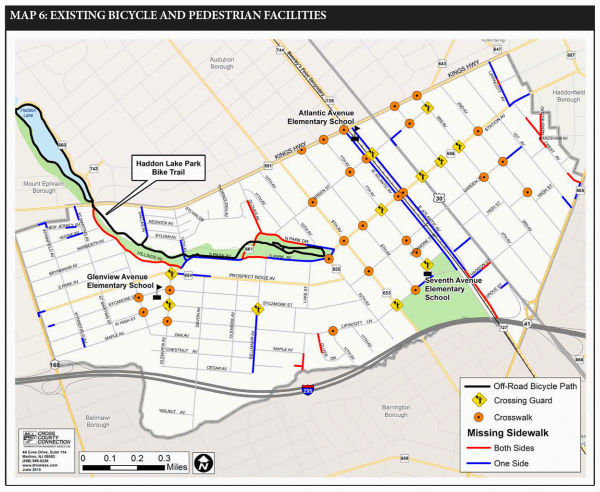 But the report also highlights ongoing concerns of safety and convenience among families who live within a short walking distance of their schools. In addition to issues like a lack of supervision, “stranger danger,” or a disability, they also cited a lack of pedestrian infrastructure along their children’s route to school as well as fears of the difficulty crossing major roads that carry heavy vehicle traffic, including the White Horse Pike, East and West Atlantic Avenue, Prospect Ridge Boulevard, and Station Avenue.

Haddon Heights will supplement the work eventually contemplated by this grant award with another $250,000 Community Block Development Grant (CBDG) it received from the Camden County government earlier this year. Borough officials say those funds will be used to upgrade pedestrian walkway ramps at nearly 100 locations across the borough to bring them into compliance with the federal Americans with Disabilities Act.

However, the Safe Routes to School funds won’t be able to support one of the most significant infrastructure projects identified in the report: the Atlantic Avenue pedestrian bridge. Owned and operated by the Conrail corporation, the condition of the bridge was identified as diminished in 2018 when the report was compiled, and it has only deteriorated further since. 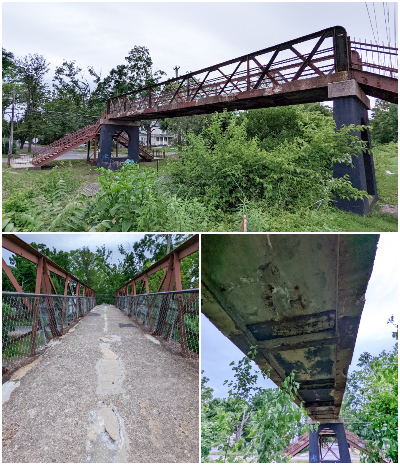 Potential solutions identified in the report included “the possibility of retrofitting or replacing the bridge to be ADA-accessible,” installing wider cross walks at the intersection with a “Stop for Pedestrians” panel sign, and adding a “School Crossing” sign assembly and crosswalk improvements.

The report also contemplates paving a parking area at the West Atlantic Avenue foot of the bridge “to provide a safe space for parents to drop off students, and to serve those accessing the proposed Cross Camden County Trail that will connect to the east side of the bridge.”

The scope and cost of any of those solutions will be much more expensive, and will require local coordination with the Camden County government and Conrail to undertake, which could put bridge repairs much farther off.