“The Weekend Painter” and “Crossing Paths” have been installed downtown on a six-month loan from the atelier of the Grounds for Sculpture founder and New Jersey native. 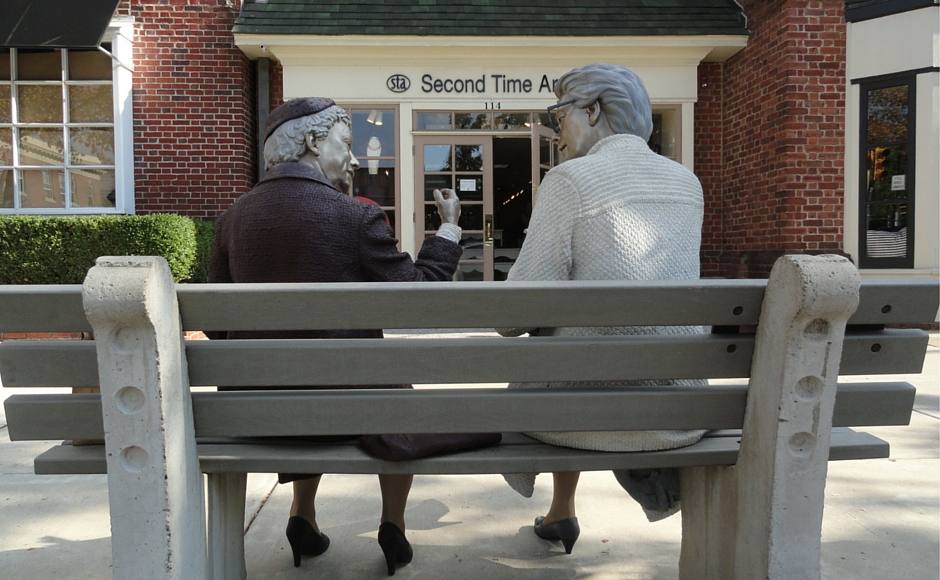 Some new faces on Kings Highway have been stirring up conversation in Haddonfield this weekend without uttering a word.

That’s probably for the best; anyone trying to strike up a conversation likely wouldn’t get much out of them.

Two of several hundred from the portfolio of the man who co-founded the Grounds for Sculpture in Hamilton, the statues have been installed outside the Country Way Bridal and Second Time Around storefronts, where they will reside for the next six months.

Johnson’s works are famous for their hyper-realistic style, and these pieces are no exceptions. “Crossing Paths,” which depicts a pair of elderly women chatting on a bench, features textural patterns that invite closer examination, from the woven fabrics of its subjects’ jackets to their detailed jewelry. Farther up the block, interactions with “The Weekend Painter” are no different: even at a close distance, the work draws double-takes from observers whose eyes are drawn to what appears to be a man touching up a building façade with a tiny paintbrush. 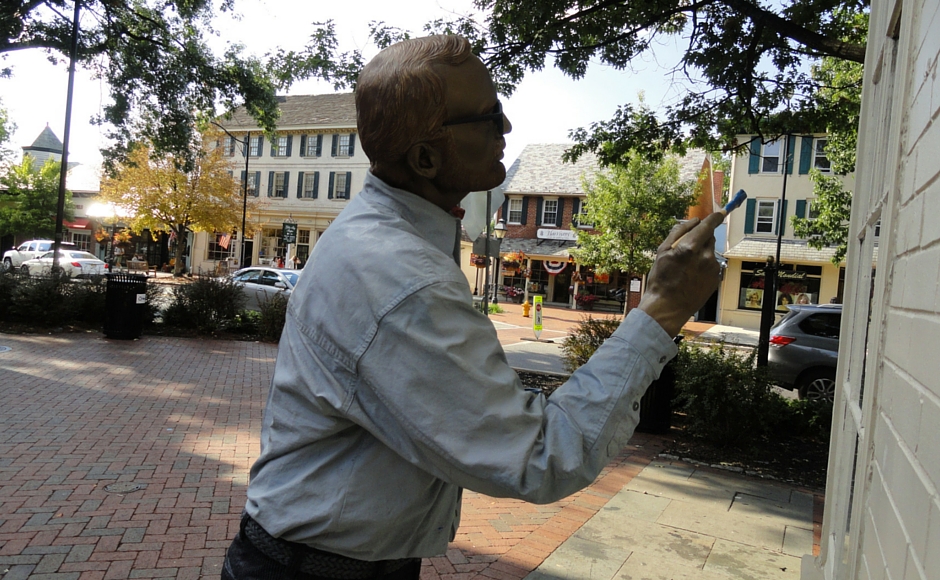 They are the sixth and seventh works that the Haddonfield Outdoor Sculpture Trust (HOST) has installed in downtown Haddonfield, rounding out a collection both permanent (like resident John Giannoti’s bronze dinosaur, “Haddy”) and less so (Harry Gordon’s “Monk” will be de-installed from the front lawn of the Haddonfield Masonic Lodge in early 2016).

Each piece represents an opportunity to connect borough residents and visitors with art in unexpected places, HOST chair Stuart Harting said. In a town known for its school district, historic preservation, and family events—“the things that make a small town very special”—Harting believes “the fourth leg of the stool can be art.”

The borough enjoyed success earlier this year with its participation in the Philadelphia Museum of Art Inside/Out exhibition, and Harting is hopeful that the loans represent “the beginning of a long-term partnership” with the Seward Johnson Atelier that “helps to lend credence to our mission to populate downtown areas with contemporary outdoor art.”

“The art is hitting people,” he said. “I’m getting a lot of personal phone calls and comments about it. It’s a feel-good thing.” 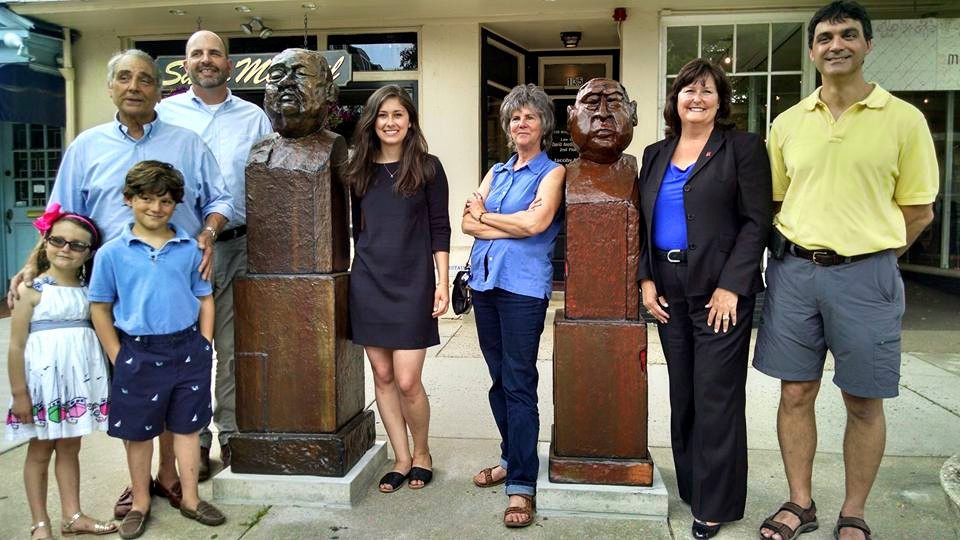 Farther down Kings Highway, Mitch Gorshin’s eponymous adventure-gear boutique offers a bird’s eye view of “The Weekend Painter” and its admirers. The work was only installed on Wednesday, but has captured the attentions of a variety of passersby already, he said.

“People second-guess it all the time because there’s a certain amount of reality to it,” Gorshin said. “[It] snaps you out of looking at your phone for a moment—but then you quickly go back to your phone and take a picture of it.”

Gorshin calls the Johnson sculptures “little delighters,” and said they fit right in alongside other sculpture trust additions to Kings Highway, like Michele Post’s “The Witnesses,” by engaging pedestrians and adding a bit of color to the downtown experience.

“It’s a definite curiosity,” he said. “It’s part of what I call ‘streetmosphere.’ You see people take it in and create their own commentary on it. It adds another level of interest to an already interesting town.”

Haddonfield Mayor Jeffrey Kasko agreed that the Johnson sculptures are amenities that “pique people’s interests” in the local business district.

“When people go downtown to shop, whether they’re in town or coming from out of town, you usually walk down the sidewalk, and it’s kind of plain,” Kasko said; “there’s nothing to see other than store windows. [The sculptures] add another thing to downtown to make it a destination.” 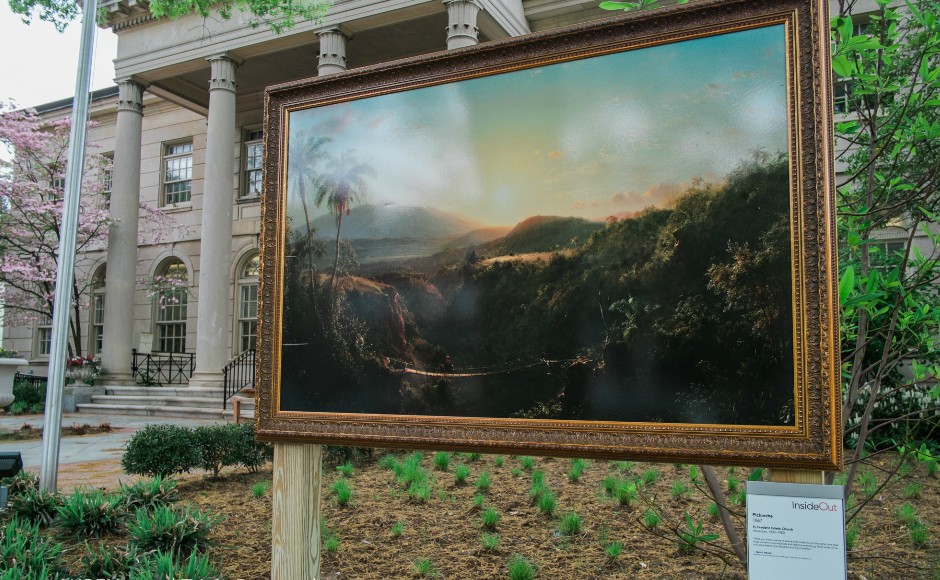 Like the Inside/Out exhibition, Kasko believes the Johnson statues are another indicator that Haddonfield is a place where public art is a feature of public life. He praised HOST for pitching the idea to the local government and delivering on its proposal.

“[We have] a willingness to try new things or try different things and see how they work,” the mayor said. “It’s certainly due mostly to Stuart and the folks who approached us and wanted to try things.”

Harting credited the borough equally for being receptive to the idea, pointing out that, aside from traffic control offered by Haddonfield police and some forklift assistance from its department of public works, the installation was achieved at no cost to borough taxpayers. HOST, which is privately funded, subsidized the loan of “Crossing Paths” in part with a contribution from The Corner Bistro eatery, the al fresco tables of which are situated across the street from the sculpture.

Harting also acknowledged that bringing the works to the borough downtown is a lengthy, complex process that “takes a lot of time.

“It takes a passion to get this done,” he said.