For the better part of two decades, Mercer Street neighbors Dave Croge and Frank Italiano have delighted visitors to their block with side-by-side holiday displays that last the entire month of December.

By Matt Skoufalos | December 19, 2016
Photos and Video by Tricia Burrough 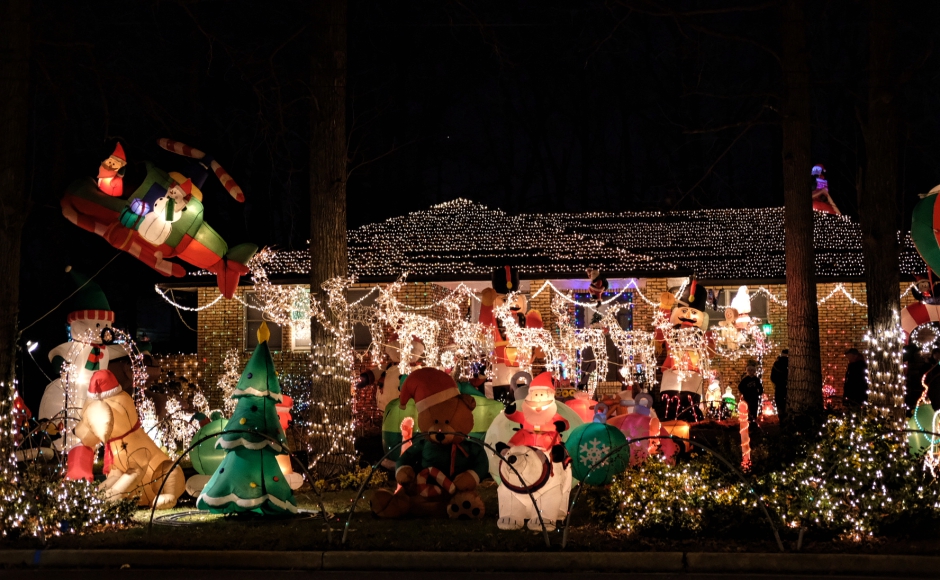 About 20 years ago, Dave Croge used to decorate his home in the 500 block of Mercer Street fairly modestly, with white Christmas lights.

But that was before he moved three blocks up the street and next door to his friend, Frank Italiano.

“He came up and said, ‘Listen, the woman next door is selling her house,’” Croge remembers.

In addition to deepening their friendship, the move inadvertently touched off a game of holiday one-upmanship that has become a neighborhood tradition for generations of Cherry Hill residents.

It’s hard to say who or what started it, but both men recall that things escalated quickly.

“My kids, we used to go out and fill three [shopping] carts [with decorations],” Croge said. “We used to hide them, and then we’d start putting them up. He buys something; I’d try to buy something bigger; he buys something, I’d buy two.” 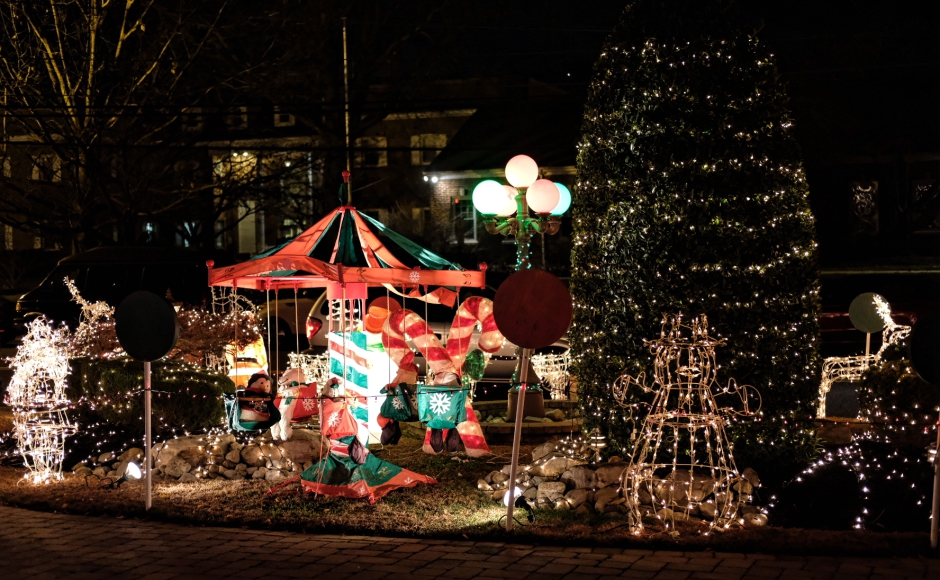 In the beginning, Croge estimates there were maybe 15 items in either yard.

After 18 years, though, the decorations now spill out from the porches of the adjacent houses, through the driveways, along the sidewalk, and up onto the roofs.

There’s countless lights, a steady rotation of holiday music, and a seemingly endless stream of visitors for hours on end.

Croge occasionally has his garage open, showing off a vintage Chevrolet within; this year, his sister’s boyfriend, Terry Carr of Pennsauken, is playing Santa on the doorstep for the children who approach. Italiano remembers a 15-foot inflatable balloon that flew in the backyard until the winds became too much for it, or the dueling Ferris wheels both men had in years past. Even the unused elements are enough to fill multiple sheds and storage bins.

The display takes the entire month of November to assemble, and is in full effect nightly from Black Friday through January 1. Over the years, it’s drawn national attention to the block from media outlets like HGTV and Inside Edition, and even international notice from papers in Italy and Romania. 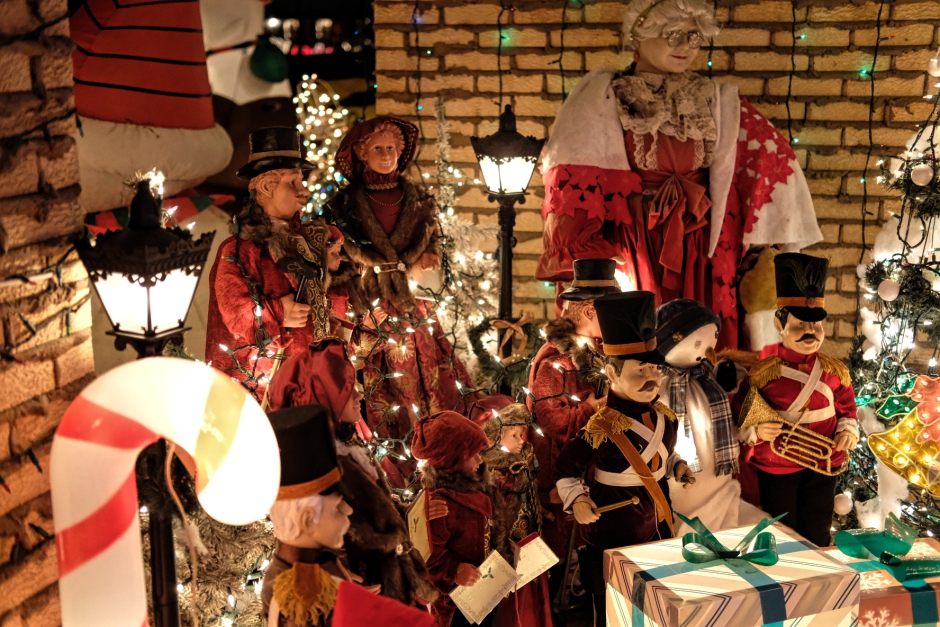 “There’s people who come to visit and their families are from different countries,” Italiano said.

“Over the time, we’ve been here long enough where we’ve seen children have children [and come back to visit].”

Through the years, the neighbors have leveraged the interest in their displays for community good as well.

In 2012, the households partnered with the Red Cross, collecting more than 800 jackets, 1,200 pounds of food, and $1,500 in cash to donate to those displaced by superstorm Sandy, Italiano said.

For Croge, the highlight of his experience was helping a mother from his hometown of Camden City to give her daughter a puppy for Christmas. When the girl saw what he’d done, she burst into tears.

“She told her mother, ‘You lied to me!’” Croge remembers. “‘You said Santa can’t afford to buy me the dog!’

“That was two years ago,” he said. “Probably the best Christmas I ever had. Kids and me, that’s it.” 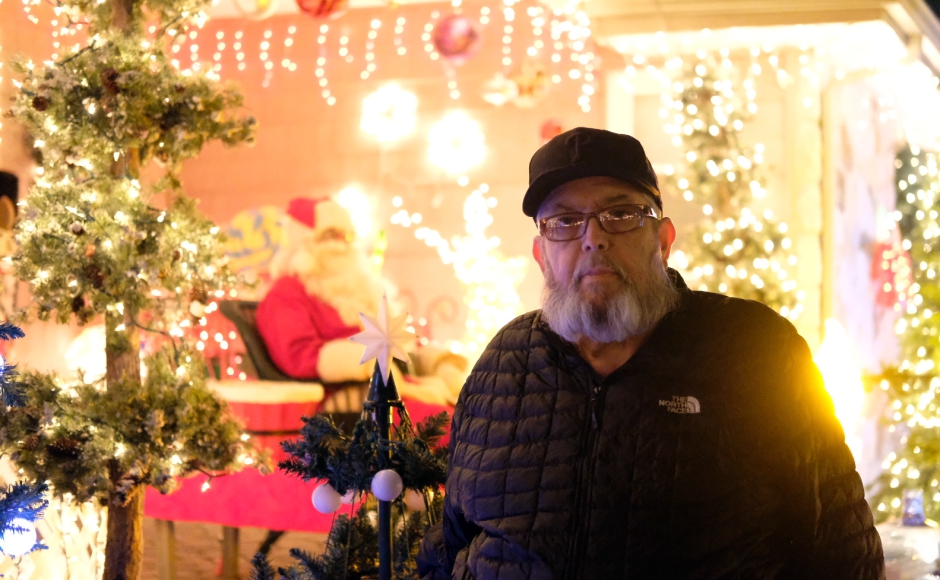 In the beginning, the displays were more competitive.

Croge recalls taping a line down the middle of the properties for a newspaper shoot one year, and walking his miniature Doberman along it for show.

In 2002, when his home came in fourth in the nation in a Sears and Roebuck holiday decorating contest—Croge’s didn’t place—Italiano enjoyed the opportunity to grind his buddy’s gears.

In the interceding years, however, the two are thinking more about what could become of their friendly tiff if they aren’t around to keep it up.

“It used to be a competition,” Italiano said. “Now we’re both old and we hand each other our canes.

“What happens next?” he said. “We talk about it every time we do this.”

Once when a reporter asked him, “What will it take to make you guys stop?” Italiano said he and Croge joked that “one of us will move, or one of us will die.” A week later, he was being helicoptered to the hospital for an emergency surgery. 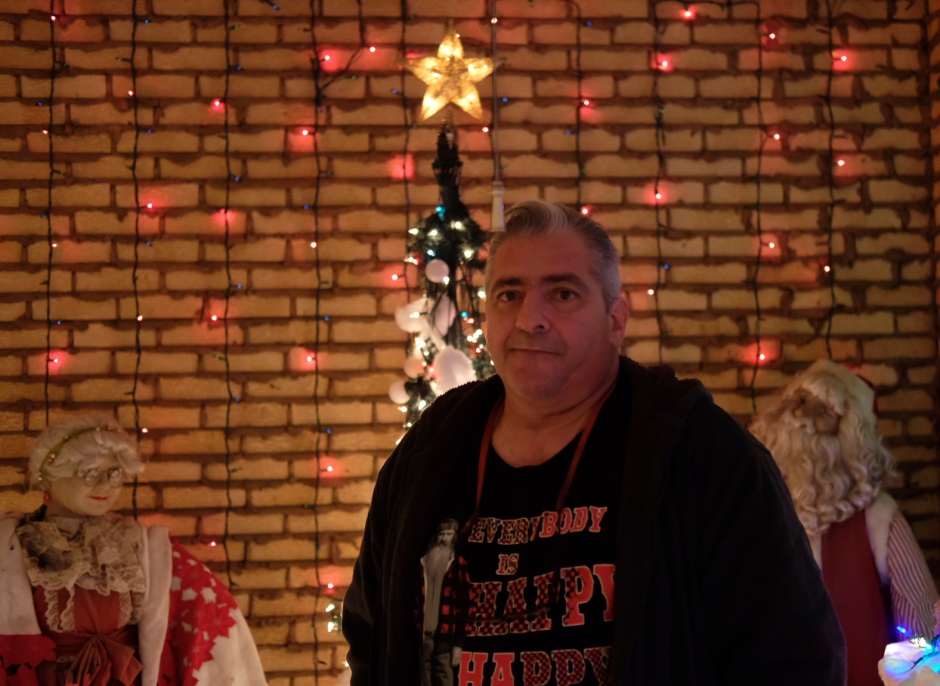 He’s unflinching in his assessment.

“I may not be around next year,” Croge said.

Italiano thinks one of his children may keep things going in his eventual absence, but nothing is guaranteed. The displays cost each household about $1,900 in electricity to run for the month, and both men have trays of sweets on their porches for guests. Croge estimates his candy cane budget is around $500.

Both men acknowledge that the effort and the cost might become too prohibitive for their families to sustain. Italiano called it going “Christmas-broke,” but defends the effort as a worthwhile investment in a generational tradition that “makes you feel like home.”

For the younger set, like his two-year-old grandson, there’s always a first-year experience that leaves a lasting impression; for “older people, it brings them back to their childhood,” Italiano said.

His next-door neighbor is one of them.

“I really miss my mother, Helen,” Croge said. “She loved Christmas as much as me.”

“It isn’t the money, and I don’t care what the neighbors think,” he said. “It means a lot to me, really. I do it for the little kids and the big kids.”