Trending
You are at:Home»Arts»JohnF and the Art of Finding Balance

At the SoHa Arts Building, graphic designer John Fitzpatrick, who goes by ‘JohnF the Artist’, uses street art as a conduit to connect with kids while de-stigmatizing mental health disorders. 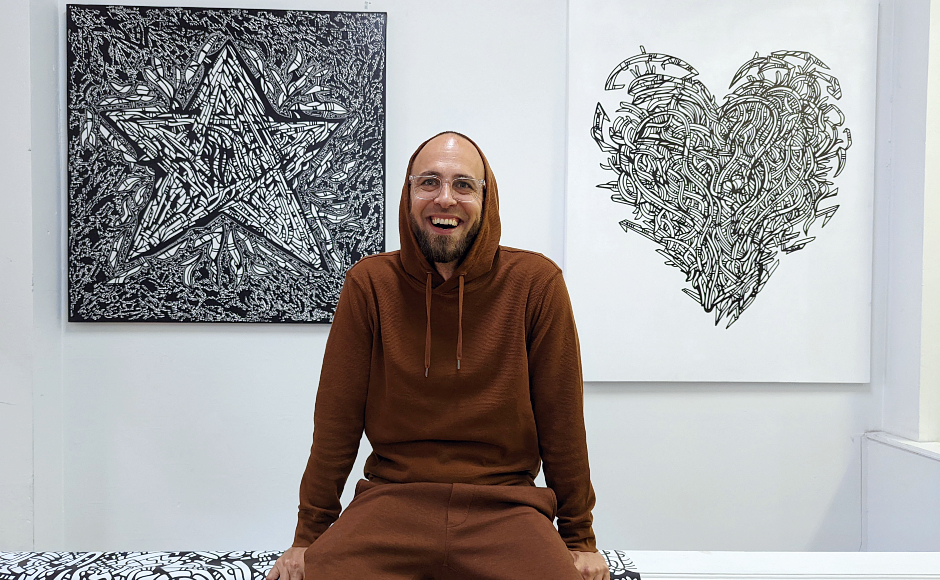 John Fitzpatrick, aka John F The Artist, in his studio at the SoHa Arts Building in Haddon Twp. Credit: Matt Skoufalos.

Throughout his childhood in Cherry Hill, John Fitzpatrick remembers how the creativity of skateboarding introduced him to a freedom of expression he hadn’t known before.

The fluidity of movement, the ability to change direction on a dime; to Fitzpatrick, the only experience that compared to skateboarding was the feeling he got when his parents and grandparents put paper and markers in front of him and encouraged him to draw.

Even then, the artwork that filled his pages was inspired by the colorful images on his skateboard decks: the visual language of brands like Creature, Hook-Ups, Shorty’s, Think, and Alien Workshop inspired Fitzpatrick as he consumed hip-hop culture and street art, and transmuted it into his own thing.

As he moved through public school in Cherry Hill, and again through community college in Bucks County, Pennsylvania, art remained the bridge that connected Fitzpatrick with other people.

“I got along with everybody because of art and how it connected the dots,” he said. “It helped me; it gave me that bridge to be able to move around, and still exist and have an identity.

“When you know who you are at a younger age, it’s pretty helpful.”

His proficiency in art later took Fitzpatrick from Bucks to the Art Institute of Florida in Fort Lauderdale, where he studied animation. Florida was also where Fitzpatrick took on his first assignments in the fashion world, an outlet he’d never anticipated discovering.

“I started doing all over prints, and I loved it,” Fitzpatrick said. “I kept on drawing on clothing, and met the most awesome people.” 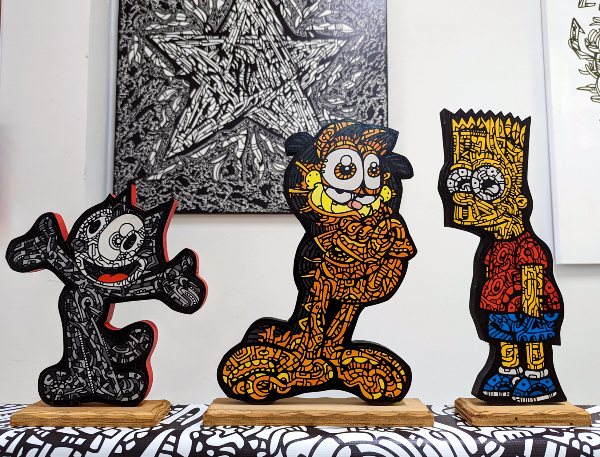 John Fitzpatrick likes to play with popular characters in his artwork, like Felix the Cat, Garfield, and Bart Simpson. Credit: Matt Skoufalos.

While finishing his degree at the Art Institute of Philadelphia, Fitzpatrick landed on a process that showcased his graffiti style on hats.

His work became the subject of a fashion story in the Sunday edition of the Philadelphia Inquirer in 2007, which launched a career in graphic design.

Thanks to his facility with digital animation, Fitzpatrick found himself thriving in a variety of industries, in which he married his street art style to corporate branding elements.

But for the professional success he enjoyed, and the support he felt from his family in pursuing his career path, Fitzpatrick also couldn’t shake the sense that things weren’t quite right. It took him some time to sort through what he described as “a lot of ups and downs” in his thirties.

“I had a lot of spirituality, health, and a good support group,” he said. “I’m eating right, I’m sleeping right, I have an amazing support group and friends. I have all the essentials that I need.

“But something’s wrong,” Fitzpatrick said. “When I’m waking up, it’s tough. Something’s up.

“I walked my butt into a behavioral health hospital because I didn’t know what to do,” he said.

Within two weeks, Fitzpatrick was diagnosed with bipolar disorder. He was prescribed medication that helped balance out his neurochemistry, and ever since then—in his mother’s words—he’s enjoyed “a new lease on life.”

“It changed my life,” Fitzpatrick said. “Everything from 30 and before that made sense. I was able to forgive myself for what I’d been through because I had a reason. Everything subsided; I could feel it.

“Managing depression, you can understand,” he said. “Managing mania when you’re happy is a whole other thing.” 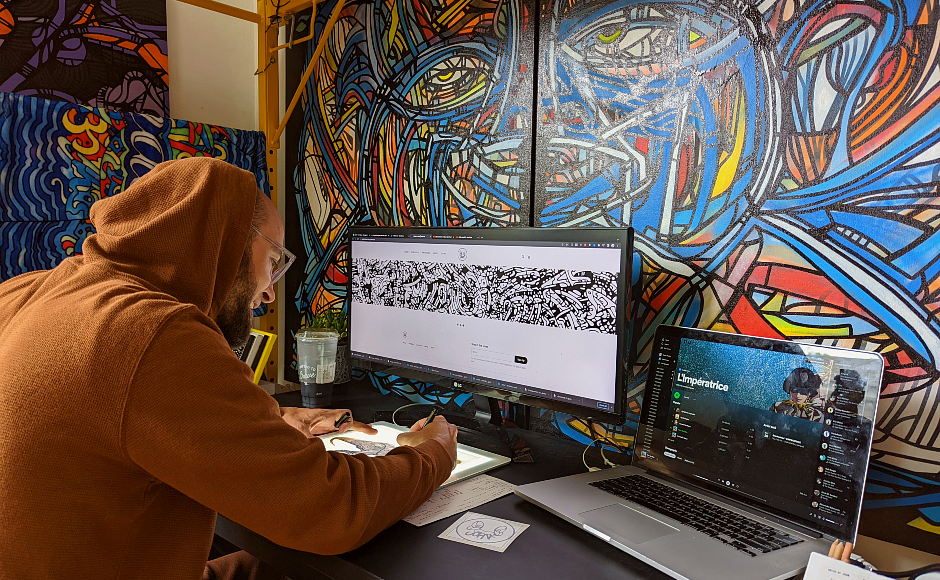 John Fitzpatrick, aka JohnFtheArtist, in his studio in Haddon Township. Credit: Matt Skoufalos.

For Fitzpatrick, the clarity of his diagnosis was a stabilizing factor in his employment and social interactions.

It afforded him reconciliation with his father before his passing.

And it inspired him to become a conduit for conversations about mental health and managing behavioral conditions that have been stigmatized socially.

Some of the last words his father spoke to him continue to reverberate within his brain.

“I heard in your voice that you have it now,” his dad told him. “All I need you to do is keep it.”

In the pursuit of keeping himself regulated, Fitzpatrick has broken away from his corporate art career to embark on a solo enterprise as a freelancer and art instructor at the SoHa Arts Building in Haddon Township. Leaning on his old graffiti tag, “JohnF,” Fitzpatrick goes by the handle “JohnF the Artist,” and has begun offering an array of classes with custom projects for children.

“I give my girlfriend and my mother and my brother and my friends credit for looking me in the eye as if the decision was an obvious one,” Fitzpatrick said. “I didn’t believe in myself, but they did. So I listened to everybody’s gut and came here to pursue my personal art, to express mental wellness, and to use my art to give back instead of to relate; to keep that conversation going, and break down the stigma, and help people be more comfortable with who they are. 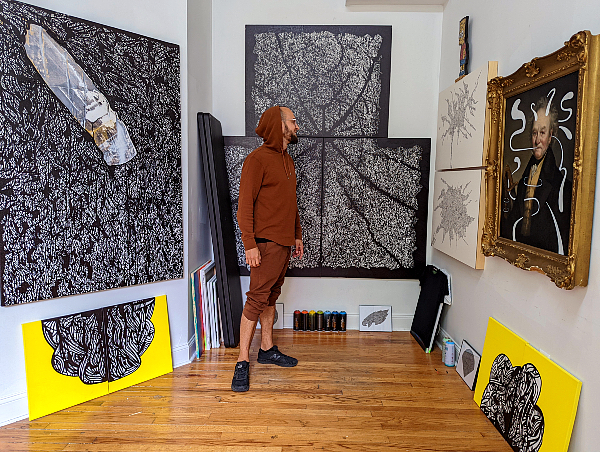 “This is the safest space for [students] to be who they are, and meet others of like experiences, or to share with each other,” Fitzpatrick said.

Fitzpatrick tailors each lesson to the interests of his students by “connecting with them individually, [and]cultivating individual expression.”

He guides them through arts instruction that is relevant to their interests.

Fitzpatrick describes his own style as “freestyle art,” fed by his love of hip-hop, electronic dance music, and skateboard culture. His chief instruction? “Put the pen down, and just keep going. The deeper you go, the deeper it gets.”

“It’s unbelievably rewarding,” he said. “This is how far it’s come so quickly, and it makes me feel like this is what I’m supposed to be doing.”

For more information on Fitzpatrick, his original works, and his art classes at SoHa, visit JohnFTheArtist.com.