The newest neighbor of the local, shared-space economy resides a half-block from the Haddonfield PATCO station. 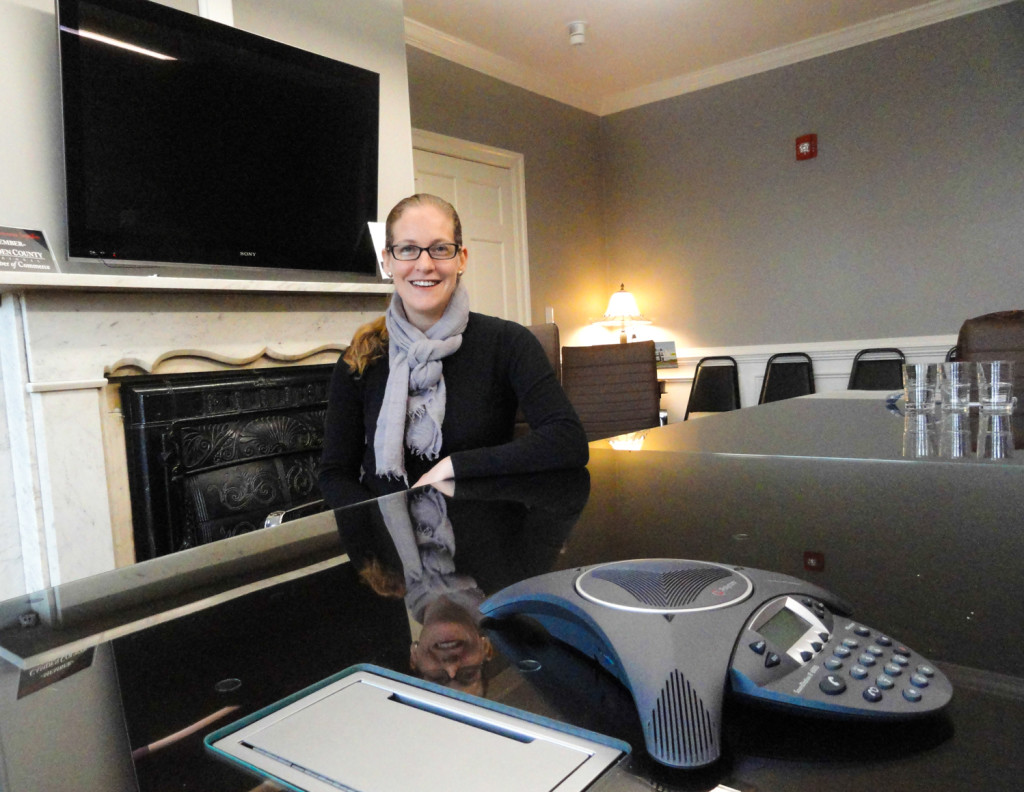 The self-determination that comes with self-employment isn’t always backed by an abundance of capital.

Many small businesses would like to branch out from their kitchen tables or bedroom offices, but–especially as lending requirements tighten and real estate rents climb–have difficulty justifying the overhead costs of a professional space.

Some follow the path taken by freelancers and telecommuters, setting up shop in libraries and coffee shops with their laptops and lattes.

But if cottage industry is the new American entrepreneurism, then coworking spaces are its office parks.

With the outgrowth of mixed-use spaces like The Factory in Collingswood and the SoHa Arts Building in Haddon Township, non-traditional workers are finding an alternative and more sustainable model in dedicated, collaborative environments.

To that list may now be added a third, local coworking space, Kings Hall, which just opened its doors in October. 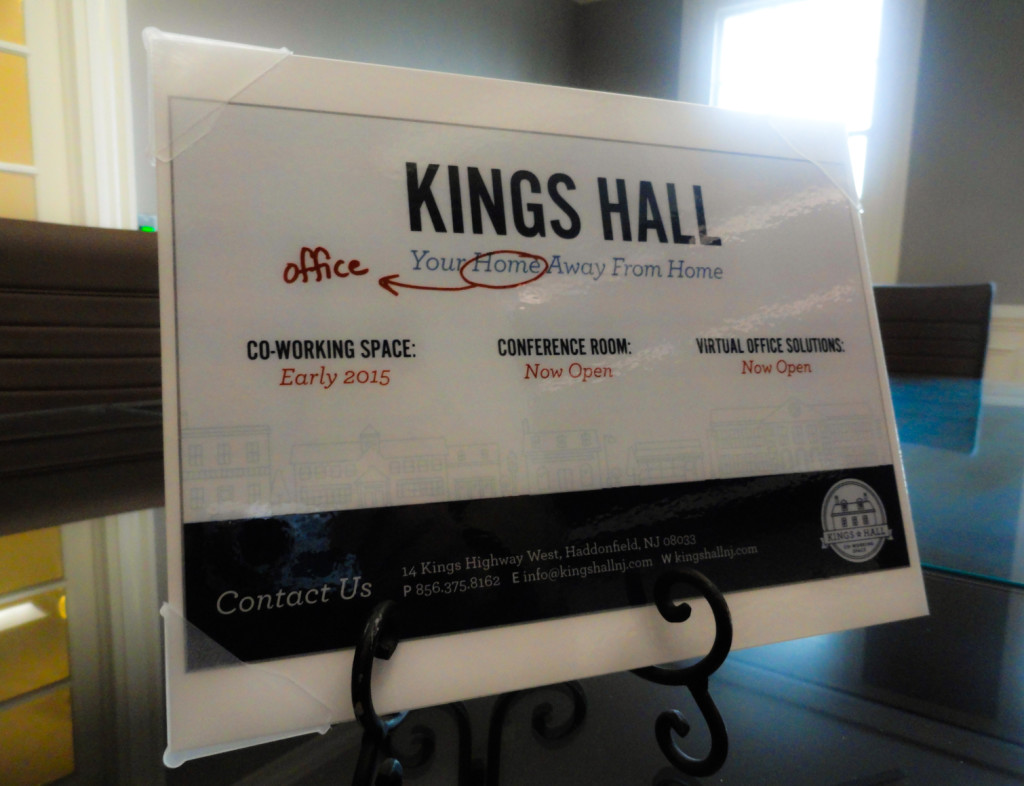 Kings Hall brands itself “Your home office away from home.” Credit: Matt Skoufalos.

‘Your home office away from home’

If The Factory is the modern antidote for industrial craftsmen looking to escape their basement workbenches, and SoHa the loft space for fine artists who’ve outgrown their garage studios, then Kings Hall is the community water cooler for white-collar workers.

Branding itself as “your home office away from home,” Kings Hall actually encompasses a trio of historic buildings along the west end of Kings Highway in downtown Haddonfield.

Its founder, Devon Perry, is a spritely dynamo whose background in corporate communications and gift for networking make her uniquely suited to yoke the talents of the professionals who congregate in the borough business district.

“What I usually tell people is we lower or remove the invisible barrier that often times exists at coffee shops and restaurants so that you can safely talk to strangers,” Perry said.

Coworking spaces, to Perry, are all about “the transfer of tacit knowledge” among their residents.

She talks about wanting to create “a clubhouse feel” at Kings Hall that welcomes members of all stripes, from working parents to community organizers to established small business owners.

“Maybe you were a captain of industry but now you want to create kids’ products,” she said.

“This person sitting across from you used to be in textiles, and maybe you can connect them with something relevant to their startup.”

Memberships range from hourly ($49 for the high-tech Willits conference room, named after the historic Haddonfield home) to monthly (the $49 virtual office package gets you a Haddonfield business mailing address and call-forwarding services; $299 reserves your own desk and storage locker with unlimited access to office resources, including the executive suites, conference room, and onsite parking). 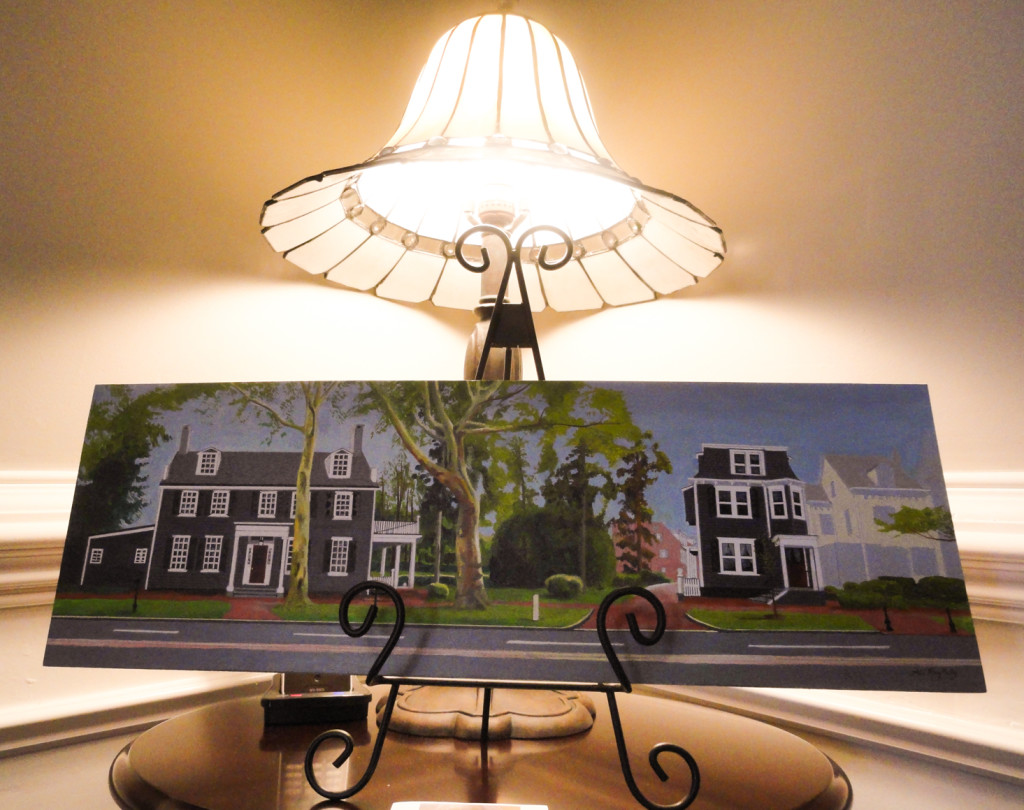 Perry also has designs, both grand and small, to roll out additional perks that would strengthen connections among Kings Hall and other local businesses.

She believes that a “hopper” pass granting reciprocal access to members of her coworking spaces and others in the tri-state area is “just a matter of figuring out the mechanics.”

“I think it’s just a part of the creative thinking movement that we’re trying to bring to our area,” she said.

“You don’t think about parents and the needs that they have when you have a startup [and]it’s adding value to what our kids do: learning chess, relaxing movement, art appreciation.” 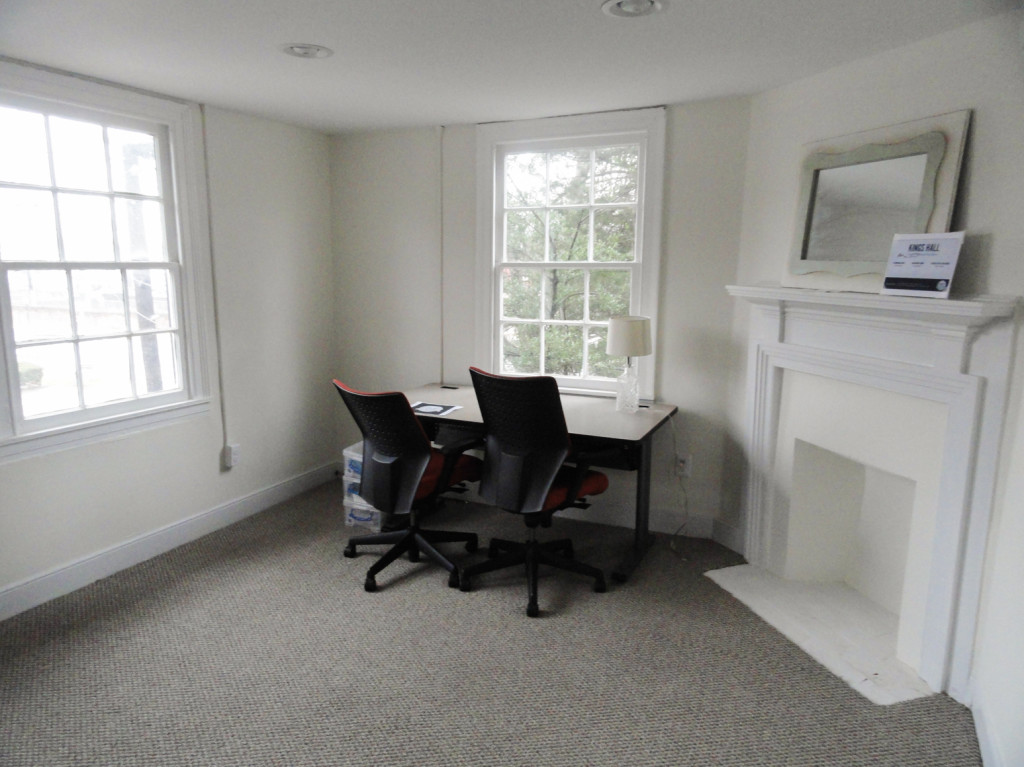 Markeim Arts Center Executive Director Elizabeth Madden said that in addition to offering parents meaningful experiences for their children, a partnership with Kings Hall also benefits the artists whose work she curates.

“[It’s] a great place for my artists’ work to go…where other people who are working there could possibly purchase or peruse the stuff,” Madden said.

“We really talked about it serving the community in multiple ways,” she said.

Madden said that Markeim already offers three-hour programs for preschool-aged children a few days a week, but if Kings Hall members demand additional instruction, “I will provide it.

“I’m thrilled that Devon and Sean are bringing [Kings Hall] to Haddonfield,” she said; “They really have provided something that’s unavailable.

“Really, it’s a small community, so to be able to support each other is fabulous.” 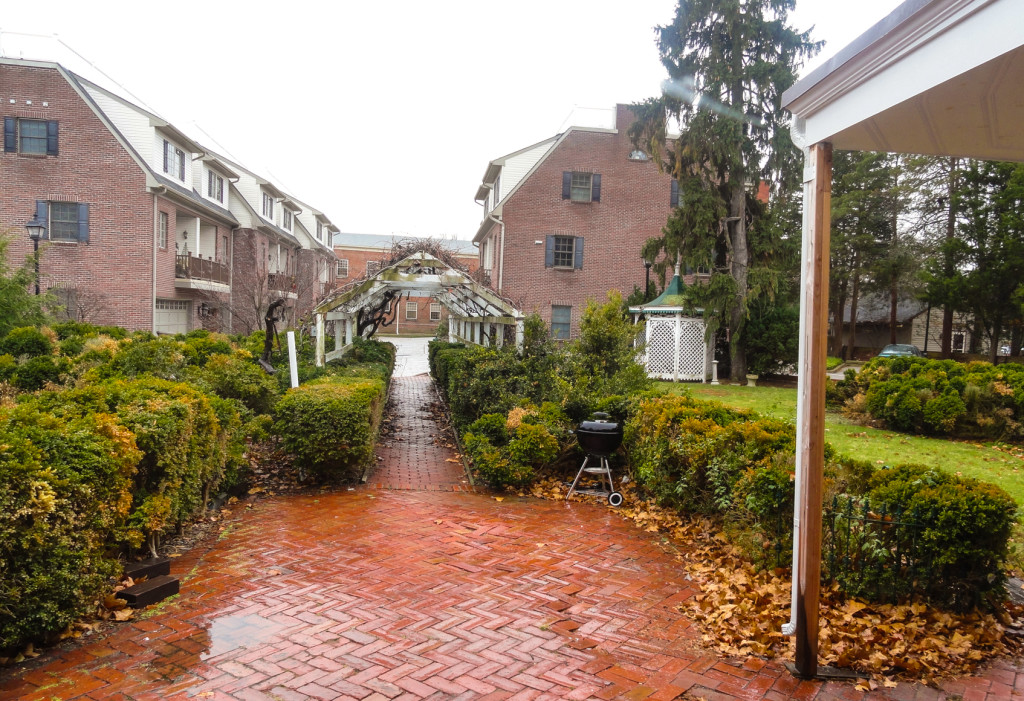 The rear patio of Kings Hall will be a showcase for landscape architects in residence. Credit: Matt Skoufalos.

‘It’s not about the space, it’s about the people’

Creative thinking was also behind the approach taken by Perry and her husband, Sean, an engineer, in rehabilitating 8 Highway West.

Initially, the couple had planned to build a traditional rental property—today, landscape architects Sikora Wells Appel, realtors ReMax Connection of Haddonfield, and attorney Bruce Cohen are among its long-term lessees—but the amount of work required to complete the building led them to refine their approach.

“We decided to start focusing on all the work that needed to be done and then getting people in there,” Devon Perry said.

“My husband started thinking about coworking, [but]before we came up with that business model, Sean started to call 8 Kings Highway West ‘Kings Hall’ [and]it really fit for the entire business.”

Since then, the Perrys acquired the property next door at 14 Kings Highway West, and have brokered a deal for the lease of the other neighboring building at 2 Kings Highway. Devon Perry acknowledges that the efforts are ambitious, but says she has a waiting list of tenants.

Although he hasn’t yet visited Kings Hall, Collingswood resident Geoff DiMasi, a co-founder of the prominent Philadelphia coworking space, Indy Hall, said that he’s happy to see the movement blooming in South Jersey as well.

“Overall, I think it’s just great that people are thinking about creating spaces for people to gather,” DiMasi said. “I’m happy that people are experimenting. It’s not about the space, it’s about people.”

DiMasi said that the most successful coworking spaces tap into “the deep need for people to have a public space to get together.” Those that don’t thrive, he said, often suffer from too fixed of a vision.

“I think one of the keys is don’t over-program it,” DiMasi said. “It has to be a space where people can imagine contributing to what it becomes, and not just buying a service.

“It’s not splitting the rent,” he said. “Coworking’s different. What’s different about it is we’re co-creating.”