Trending
You are at:Home»Business»Labor Day in NJ: Organization, Education Keys to New Economy

Current economic conditions favor those with health and sciences degrees, but workers need organization as well as education to combat income inequality. 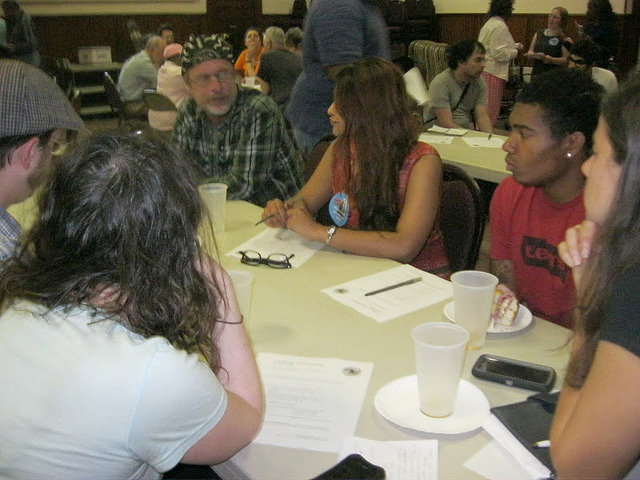 When Gwendolyn Snyder graduated college in 2008, the economic collapse had put her classmates in much the same position as their peers who entered the workforce with only a high school diploma.

“Folks who either graduated from high school and had actual experience in vocational jobs or folks who got out of college, we were all working minimum-wage jobs,” Snyder said.

It was a frustrating observation, she said, and one that transcended generations.

She saw older workers watch their pensions and healthcare benefits were eroded by the employers to whom they had given years of service.

She saw parents concerned that their children would be unable to get a public-school education in communities that are running out of the money to provide it.

She saw the institutions that had been established as a safety net for the most vulnerable gutted by austerity budgets.

Disturbingly, Snyder said, the national dialogue around such issues wasn’t about how the people at the fringes of society should be cared for, or how many of them there are, or how they got there.

Such conversations were almost exclusively happening within faith-based circles, she said. Snyder also understood that simple charity is insufficient to lift an entire nation of workers out of an income gap that has diverged to a disparity unseen since the 1920’s.

“We don’t believe the answer is a soup kitchen,” she said. “We think the answer is that folks who feel incredibly disenfranchised right now [should be]organizing and becoming a meaningful force for change.

Instead of access to basic necessities being regarded as a human right, Snyder said, “in America you have to be competitive enough to earn enough to eat.

“It’s figuring out, ‘How do we live in a society where if you’re retired from work, or out of work, that you can still eat?’,” she said. “And that you’re powerful enough to fight for your right to still eat?”

‘Grassroots organizing is how you win stuff’

Today, Snyder is the Executive Director of Philadelphia Jobs with Justice, a coalition of some 40 different neighborhood groups, communities of faith, and student organizations advocating for workers’ rights.

A big part of the discussion they have involves getting away from the idea of a “labor movement” and toward an understanding of current economic conditions as a problem of “working people” altogether.

“Unless you are part of the top 5 percent of society, you’re working for a living,” Snyder said. “Being a worker is about being in a working-class community; trying to raise your kids so they have the same chances you have; being treated with respect by your boss. It’s also a huge deal for students.”

Anti-unionism has often driven a wedge among groups that Snyder said would otherwise be natural allies, or thought they could achieve parallel goals independently. In today’s economy, however, “We have a shared struggle and we need to work together,” she said.

Jobs with Justice members come from “the Jewish labor movement, from black churches in Philly; from mosques, from an anarchist group on West Baltimore Avenue,” she said.

“I believe in working people organizing,” Snyder said. “I don’t even think you need to be in the same workplace together. I think you just need to break down some walls.

“Grassroots organizing is how you win stuff,” she said. “It’s about folks standing together in their neighborhoods. You start talking to a community and building from the bottom up, with folks who agree with each other, know each other, and can change things.”

In an age where political participation is often reduced to electronic petitions, fundraising campaigns, and “slacktivism,” Snyder said she has grown to believe there is no such thing as a “natural political process.” Without community organizing, she said, a lot of the questions of how to lift workers into a sustainable, living wage go unasked. 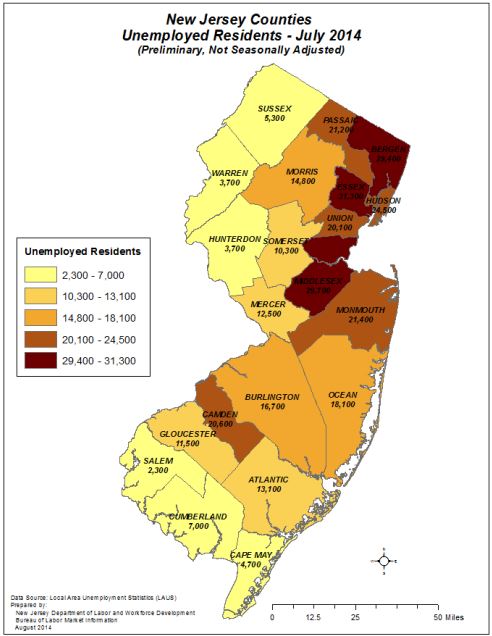 A snapshot of unemployment data in New Jersey as of July 2013. Credit: NJ Department of Labor and Workforce Development.

On a practical level, the employment picture in New Jersey is slightly worse off than the national average.

According to July 2014 figures from the Department of Labor and Workforce Development, the state lagged behind the national average unemployment rate of 6.2 percent (New Jersey sits at 6.5 percent), with some 293,700 people out of work.

That’s still an improvement over the 375,000 unemployed New Jerseyans counted a year ago at this time.

In Camden County, the unemployment rate hovered around 8 percent last month; its neighbors in Gloucester and Burlington Counties are facing a 7 percent rate, while Atlantic and Cumberland Counties are around 10 percent and trending higher.

According to Natalie Reaves, who heads up the department of economics and political science at Rowan University, New Jersey is “somewhere in the middle” of the nation in terms of job growth, with work in the highest-growth-rate states being driven by natural resources.

“The biggest factor affecting the ability to get jobs is to match the skills employers want with what workers have,” Reaves said.

“Every semester I show my students the data on college majors, unemployment rates, and salaries,” she said.

“Of course, the tech jobs reign supreme, and fields such as accounting, finance, and economics are usually in the top 20. But when I go around the room and ask about their choice of majors, I am often surprised by their answers.”

Currently, the top five most available jobs, according to the state, are in software development, retail work, computing, nursing, and retail supervision, with some 23,000 positions available across those fields.

For about 60 to 76 percent of those retail jobs, employers are requiring at least a high school diploma, and 82 to 88 percent of the computing jobs require a bachelor’s degree, figures that further demonstrate how employers have the advantage of dictating terms in a global economy.

In the southern reaches of the state, one such outlet for undereducated workers had been the casino and hospitality industry in Atlantic City, the decline of which Reaves called “sobering,” in light of the closures of Revel, Trump Plaza, the Showboat, and the Atlantic Club, which will displace some 6,000 workers in the impoverished city combined. 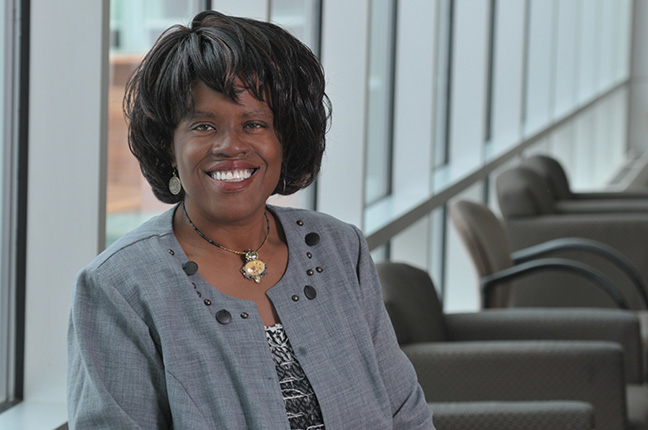 Waiting on the ‘eds and meds’

But Reaves does believe that South Jersey “is poised to lead the expansion” in job growth in the Garden State.

“We now have two medical schools at Rowan, and a Rowan-Rutgers health sciences partnership in Camden,” she said.

“Furthermore, we see health systems from across the river such as Jefferson, Penn, CHOP, Dupont, and others expanding their practices into southern New Jersey.

“Almost overnight we see a proliferation of urgent care centers, along with new pharmacies, over-55 communities, and assisted living complexes,” she said.

“The healthcare sector traditionally is more resilient than others, and South Jersey is headed in the right direction.”

At the same time, Reaves said, the biggest issue for workers in New Jersey is the state’s unfunded liability issues in terms of both healthcare and retirement benefits.

“In the end, we are going to have to cut benefits and/or increase employee/employer contributions and increase taxes,” she said. “Any real solutions are going to hurt, but no one wants to hear this.”

For Snyder, the solution lies in a greater grassroots mobilization of people who are unwilling to accept being “shoehorned into minimum wage jobs that not only can’t support a family, but sometimes can’t support an individual.

“A lot of folks live in incredible insecurity,” she said. “You either get a union, which says, ‘We’re going to go on strike’…or we develop a political movement where people say healthcare is a fundamental right.

“It’s not an education problem,” Snyder said. “It’s a policy and legislative problem.”