When a six-year-old worries about campaign rhetoric, it’s a sign that adults in the house are also anxious.

In 15 years as an educator, I have often been called upon by children to explain various phenomena: “Why is the sky blue?” “What does ‘nonsense’ mean?” “Why won’t my mother let me have a dog?”

Usually, with common sense and kindness, one is able to send a child on his or her merry way, confidence restored, the world set right.

Recently, I was volunteering in an after-school enrichment program for 6- and 7-year-olds. As an icebreaker, the director asked each member of the group, “If you had a million dollars, how would you spend it?”

Among the more mundane wishes for ponies and Pokemon, one young man answered ominously, “I would buy a bomb to explode ISIS and Donald Trump.”

I caught a laugh in my hand out of shock, but my amusement quickly soured into sadness, and then borderline despair. This child, at 6 years old, as many children do, had an awareness of what is playing out on the world stage and the anxiety and confusion commensurate with that awareness. In addition to developmentally appropriate fears and concerns about homework, sports, and the occasional cruelty of peers, his young shoulders had borne a profound foreboding regarding Trump and ISIS, both of which (quite precociously, I think) he had lumped into the same category: people to be exploded.

Donald Trump may consider himself a truth-teller but believe me when I tell you he’s got nothing on the mouths of babes.

Children are sponges. In an environment of dread and outrage, they will absorb that poison and carry those uncomfortable feelings around with them.

No matter the passion of my own political leanings, my teacherly heart feels obligated to tell children that it is never appropriate to “explode” anyone. And yet absolutes are not a panacea in this complex and contentious election year. When kids catch wind of the biting language, ad hominem attacks, and vitriol coming out of the Trump campaign, how are parents supposed to answer their concerns?

How can you tell your child, on one hand, not to engage in bullying and schoolyard taunts, and then explain how and why a presidential candidate is displaying that very same kind of juvenile behavior? It is easy to fall into blanket generalizations; to tell your sons and daughters, ”Trump is a very bad man. An evil man!” But that isn’t altogether true, and anyway, that kind of negative, two-dimensional labeling is one of Trump’s own tactics, and not a very constructive one.

Explain that The Donald will say just about anything about anyone—false and hurtful things about women, followers of Islam, Mexican people—in order to secure his wealth and influence. Tell them it’s unclear whether Trump actually believes any of his own powder-keg rhetoric or he is just using it as a means to an end. Remind your children that the most powerful drug on the planet is power, and that Trump will resort to any of the underhanded tactics in his playbook just to keep the votes and support coming.

“But what about his followers?” they will surely ask. “How do Trump’s supporters not realize that he is simply telling them whatever they want to hear in order to get their votes?” This might take a little longer to explain, but it can be done.

Tell your children that Donald Trump’s supporters are not bad people either, but that they are acting out of fear. Many of his followers are struggling to make ends meet, working hard at dead-end jobs in return for wages that barely pay their bills. They are looking for a person to tell them not just that the conditions of their lives will improve, but that their presently bleak situations are the fault of outsiders—of immigrants, strangers; people who look, speak, and believe differently than they do.

Let your children listen to Nina Simone’s “Backlash Blues” and explain to them what Nina means by “that mean ol’ white backlash.” That when a group of people that has been historically oppressed begins to gain ground (putting an African-American man in the White House, legalizing gay marriage) the group of people who have been historically privileged sometimes begins to rise up in anger.

Maybe the most profoundly terrifying thing to a child is to hear an adult they love and who protects them say that they are afraid.

Stay away from terms like “good guys” and “bad guys,” or equally meaningless terms like “liberal” and “conservative.” Avoid the urge to dumb things down. Children have a much wider capacity for understanding subtleties than we sometimes realize. By the age of 4 or 5, most children know empirically that there’s no such thing as the boogeyman, although an emotional fear of him may remain well into adulthood. To characterize Trump as such does a great disservice to the intelligence of your children. No, he is not a monster or a demon; just a deeply flawed human being, and your children should be reassured of this. 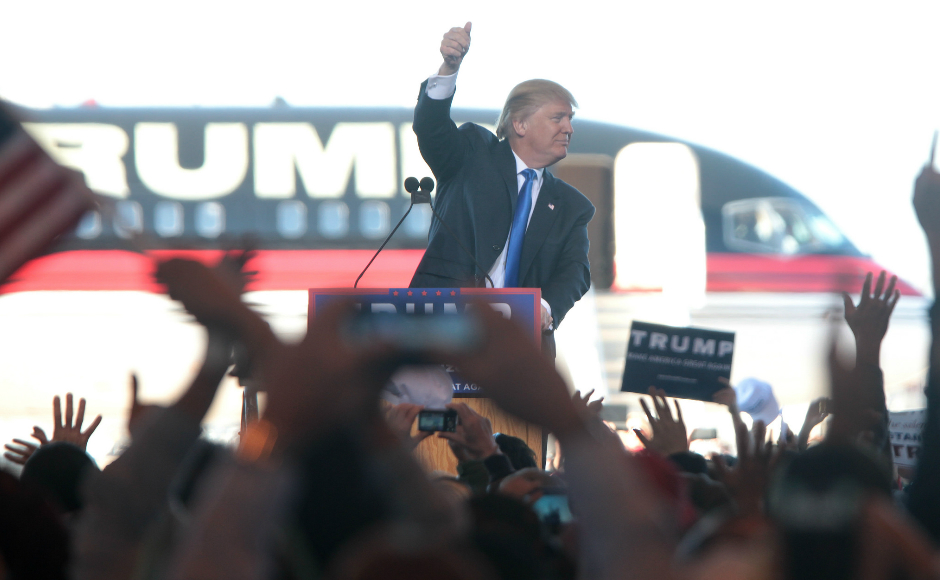 In order to really assuage your children’s Trump-related fears, though, you have to confront your own. To see an individual rise to power by so effectively exploiting the fears of others scares us in turn, and we find ourselves in a feedback loop of fear that we telegraph to our kids.

As it is often said, children are sponges, and in an environment of dread and outrage, they will absorb that poison and carry those uncomfortable feelings around with them. The tension will cause them to fantasize about simple solutions—like buying a million-dollar bomb with which to explode the source of their consternation.

It is okay to feel afraid, but remember that you as an adult have more agency than a child. Maybe the most profoundly terrifying thing to a child is to hear an adult they love and who protects them say that they are afraid. When children observe powerful adults like Trump behaving like children—which in turn causes the actual adults in their lives to behave like frightened children—they feel like the world has turned upside down. Children need adults to act like adults: to be calm, rational, reasonable, intelligent, and kind.

That is your mission, then, if you choose to accept it. To frame the chaos of this new style of political discourse within a context of detached rationality. To speak and behave in a way that rises above the mess. To reassure our children that grown-ups are still grown-ups, and that Trump for all his bluster and support, is still an outlier.