The search for American soccer players who can compete with their international peers starts young, and it may start in South Jersey. 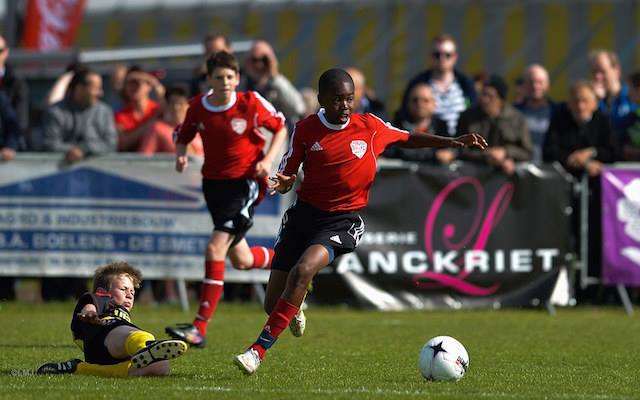 After more than a decade overseeing the academy team for English Premier League club Chelsea F.C., Jeff Bookman was named its head of international youth development.

When he came to the United States to survey the Chelsea affiliate squads, Bookman discovered not a lack of talent among American players, but an absence of quality opposition to test them, and no clearly defined pathway to playing the game at a pro level.

“In the area I was covering, there are so few professional clubs,” Bookman said.

“If you look at South Jersey and you look at New York, there’s one pro club, the New York Red Bulls, and one club, the Philadelphia Union, that represents this area. How many players can they have on a roster? These players that they don’t see, where are they going?

“The amount of talent that they have here, we’ve got to look at something that bridges the gap between the talent and the country,” he said.

It’s a considerable challenge to monitor even the best players in regional developmental academies, Bookman said. Without intermediate programs along the way, some of the top talent in the country may never be recognized nationally. 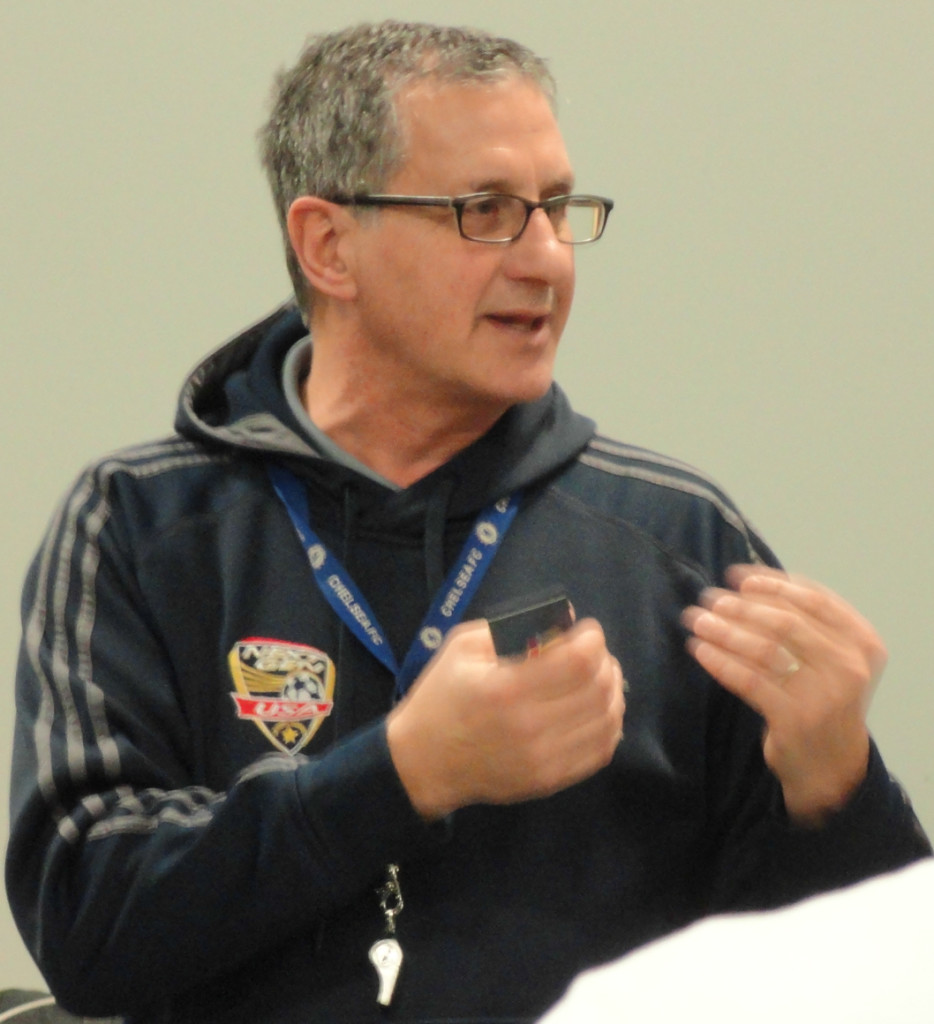 But as Technical Director for Next Gen USA, a Moorestown-based youth soccer development organization, Bookman is helping to roll out a development and scouting model that pairs the best players in a given age group with their most skilled peers in a non-competitive setting.

By exposing the top youth in the region to comparable talent among players close to their homes, Next Gen USA offers them opportunities to develop alongside their peers from broader and more discrete regions.

If the organization can model proof of the concept in South Jersey, Bookman said, the same approach can be rolled out nationwide.

“Best with best helps accelerate their development,” he said.

“If the best players become regional players, it should mean something as a stepping stone to the national team. If they don’t make the national team, at least they’re playing state soccer.”

The Next Gen model also differs from other programs in that its mission is to offer access to best-with-best camps that are free of charge for top-tier talent. Recognizing that “everybody wants a bit of their time,” Bookman said, Next Gen camps are designed not to conflict with players’ club schedules, and teach character virtues as well as technical skills.

“The good habits we’re trying to expose them to, we say, ‘Don’t just keep this to yourselves,’” he said. “You go back to your clubs, you lead by example, and other kids will follow you.” 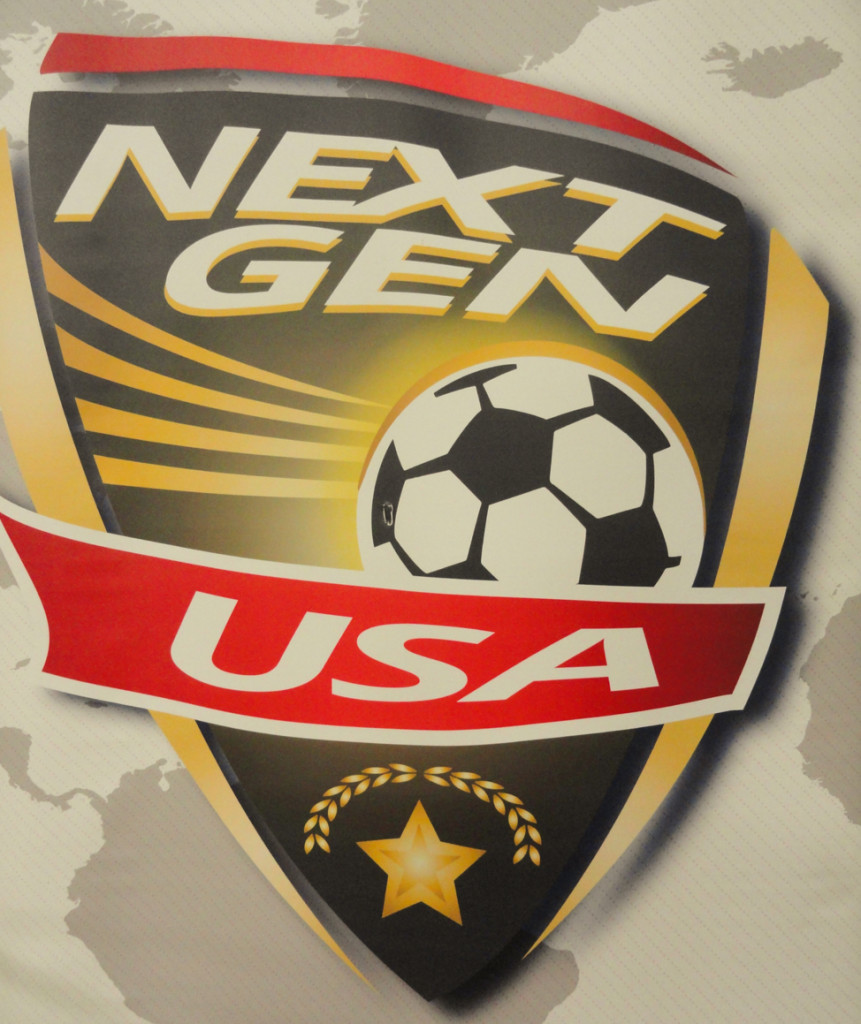 ‘Good players make each other better’

Next Gen USA South Jersey Regional Director Scott Middlemass is a journeyman defender who’s played professional soccer for six teams on three continents. His player progression system is at the heart of the Next Gen scouting process.

Middlemass will canvass local clubs and invite some of their best players to a Next Gen training camp. Children as young as nine and as old as 15 come together once a week for ten weeks.

“The idea is good players training together are going to make each other better,” Middlemass said.

“We invite them in, have a look at them, and they’ll either be offered an invitation to the emerging talent center or the talent identification program.”

The best talent from a given training center is invited to a Next Gen regional training center, in which the best players from Connecticut to South Carolina train against one another, eventually yielding a crop of athletes that the organization takes to Europe to see how they fare against the top players from youth academies there.

In a recent trip to Belgium, the under-13 Next Gen squad made it to the quarterfinals before falling to the eventual tournament champions from FC Barcelona. 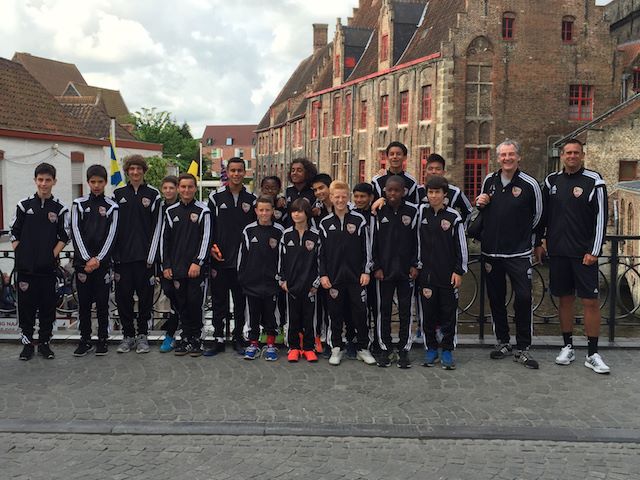 “Some of the top players that we have [in the United States]today would be in academies in Europe,” Middlemass said.

“The mentality, the way they train, the focus, their desire to want to be a top player [are identical].”

But, he admits, “99.9 percent” of even their soccer careers will end in college, which is why Next Gen USA camps imbue lessons they believe will be transferable to other aspects of their charges’ lives.

“There’s no pressure on them,” he said. “They don’t get shouted and screamed at. It’s an environment where we try to give them confidence to play and express themselves.” 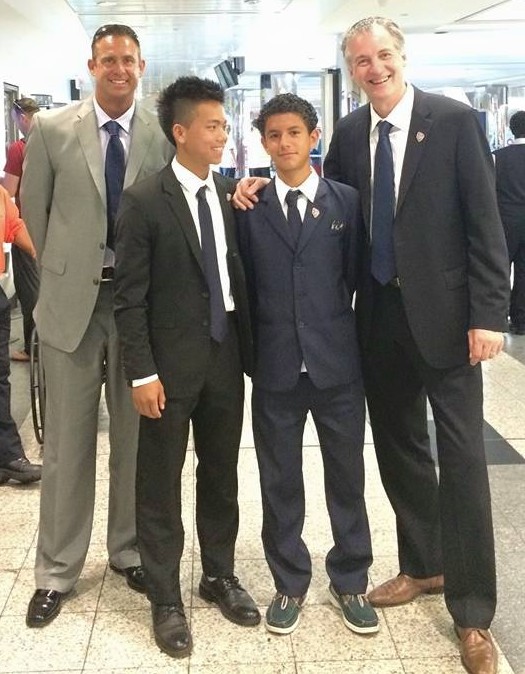 Next Gen USA also operates an Urban Promise program, which scouts impoverished children who may never have had the chance to be coached professionally or to afford the cost of joining a travel soccer club.

One such player, Onyx Murrilio, notched eight goals in the Belgian tournament, earning him the golden boot as its top player. Murrilio’s participation in the trip was funded entirely by charitable contributions.

“America will probably never reach its full potential unless the pay-to-play model is changed,” Bookman said.

“The kids who are in underserved communities have to be built into the systems,” he said. “We want to go into these areas, identify young leaders, and get them to take the program forward.

“If we can identify young leaders that we can mentor as coaches, and [they]see that this is a way forward for them, [we can]turn them into mentors for the young kids who are growing up in their neighborhoods,” Bookman said. “And that way it’s a sustainable model.”

“We can produce players that are going to reach their potential in life; whatever they do,” Bookman said. “We encourage them to keep up the academics; keep up the life skills at home.

“We’re educating for life through a passion for soccer,” he said. 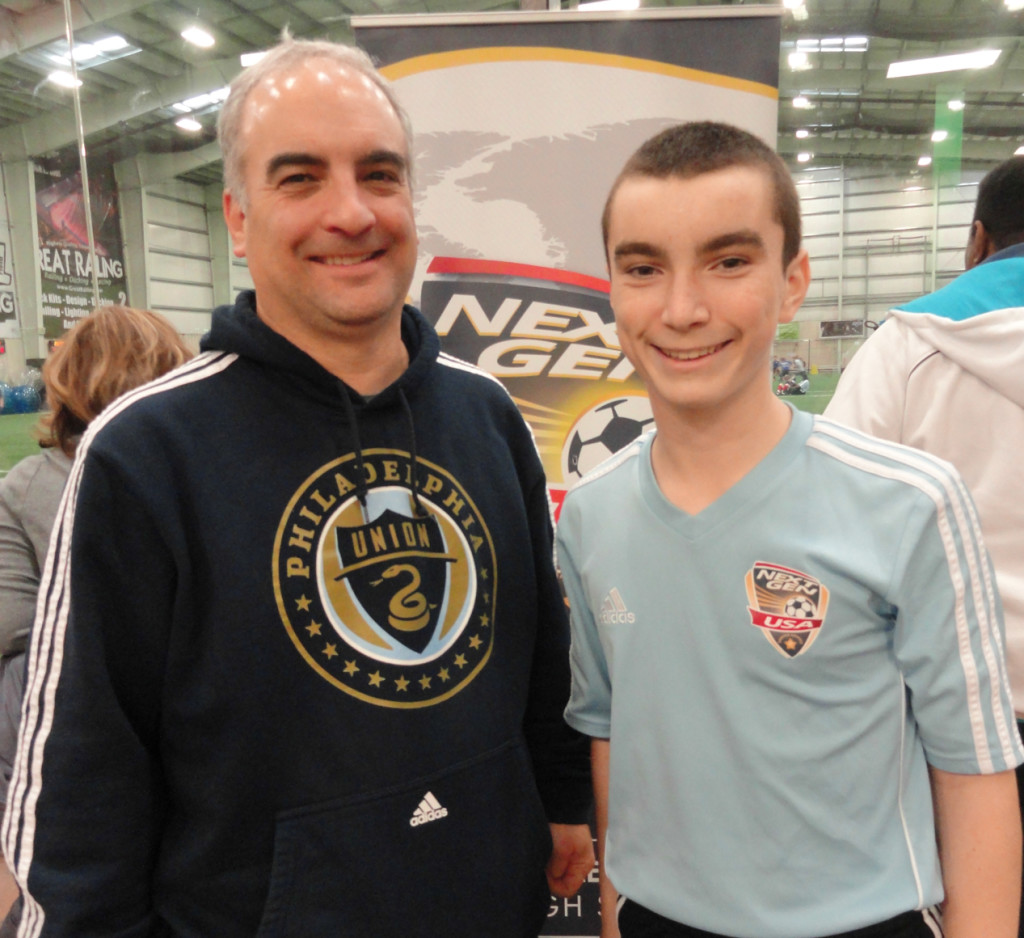 ‘The game is the best teacher’

Westampton resident Joe Arone and his 14-year-old son, Daniel, have both participated in Next Gen USA training since its inception.

Daniel, a midfielder, said he’s having fun as well as learning more about the game.

Joe, who is Daniel’s club coach as well as an assistant with the women’s soccer program at Burlington County College, said that although the experience runs deeper than that, he’s happy that Daniel is developing in a positive environment.

“I just want him to enjoy what he’s doing and be happy,” Joe Arone said.

“These kids, if you invited them to come out here and play a pickup game, this is what they’d be doing. There’s no pressure to win, and when you train kids, that’s what you want. The game is the best teacher.”

“Some parents are delusional because they think their kid’s going to get a college scholarship,” Joe Arone said. “To, me that’s not the endgame. I want him to do this because he loves it. If he happens to play soccer in college, wonderful. There’s only about 10 scholarships per Division I team. Have your kid love what they’re doing, and let the chips fall where they may. 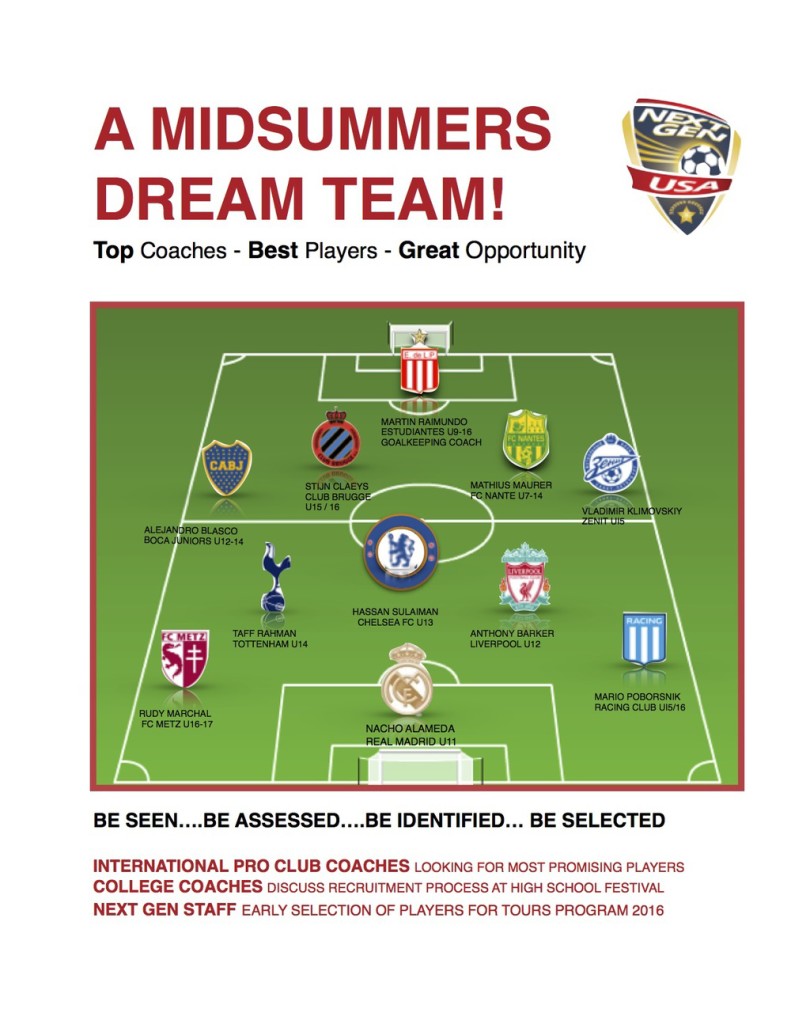 For parents like Joe Arone who are youth coaches themselves, Next Gen USA also hosts professional development clinics.

The organization has brought in international talent from professional clubs like Chelsea, Celtic, and Liverpool, as well as staffers from MLS teams like the Philadelphia Union.

Their instruction helps parent-coaches by sharing global traditions as well as modeling strategies that have yielded success at the highest levels.

“To sit and watch a training session with the number two guy in the Liverpool youth system, Rodolfo [Borell]; he was phenomenal,” Joe Arone said.

“They’ve brought in the Union, they’re brought in a guy from Celtic, and every single one has been great.”

The environment at Next Gen USA emphasizes leadership in small but meaningful ways, all of which Joe Arone supports, from shaking hands while maintaining eye contact to learning how to “go up to an adult and speak confidently.”

More importantly, he said, the structure of the player progression system means that the players make friendships while they improve. 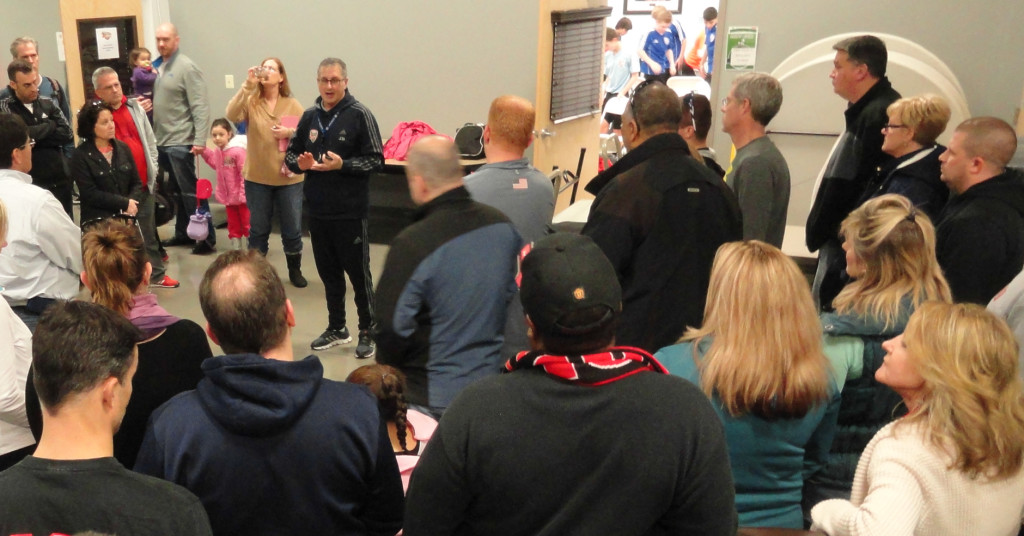 “The big buzzword now is ‘academy,’” Joe Arone said. “There’s only three academies in the state of New Jersey, but there’s a lot of teams that call themselves academies and they’re not. You have to be certified by US Soccer to be an academy; academies are free, but the academy team doesn’t start until 14. A run-of-the-mill parent doesn’t understand that.

“I want my son to play at the highest level that he can play, but I want him to be happy,” Joe Arone said.  “I want a kid who is picking up a ball and trying to do things other nights when we’re not having games. That’s where something like this comes in and it’s wonderful.”

“It makes you have to go harder, 100 percent, all the time,” said Daniel Arone. “They taught me that it’s not just about soccer, it’s about your school, your attitude, and life.

“I feel like I’m having fun,” he said. “I’ll go out today thinking that I did the best I could do.”