Trending
You are at:Home»Police & Fire»Police Seeking Suspect in Pennsauken Shooting 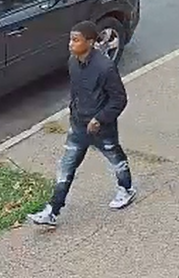 Man wanted in connection with a Pennsauken shooting. Credit: CCPO.

Pennsauken Police are looking for a man they believe has information about a shooting that occurred in the township around 1:30 p.m. October 7.

The incident, which authorities say occurred in the 3900 block of Camden Avenue, left a 34-year-old Pennsauken man with multiple gunshot wounds.

According to the Camden County Prosecutor’s Office (CCPO), the man shown in these images may have information about the shooting.

“Members of the public should not approach the individual shown below,” the CCPO noted in a statement.

The investigation is ongoing, and no one has yet been arrested in connection with the incident.

Man wanted in connection with a Pennsauken shooting. Credit: CCPO.

Anyone with information about the case or the man shown in the photographs is asked to call Special State Investigator James Brining at 856-225-8439, Pennsauken Det. Richard Capone at 856-488-0080, x2409, or to e-mail ccpotips@ccprosecutor.org.