Trending
You are at:Home»People»Pride Month Kicks Off with Celebrations in Haddon Twp, Collingswood, Merchantville

The festivities include parades, parties, community education, and more. 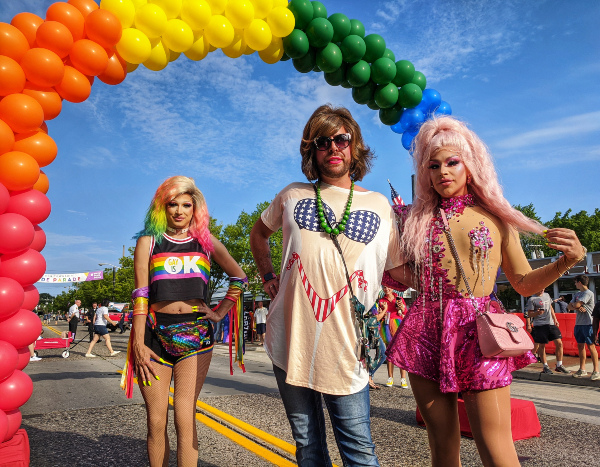 Since the Stonewall Riots of 1969, when New Yorkers pushed back against police crackdowns on the LGBTQ+ community, June has been designated as Pride month: a commemoration of their fight for equal treatment under the law, social acceptance, and cultural contributions.

Pride month is a global event, but celebrations in South Jersey hit another level last year with the Haddon Township Pride parade, a two-hour festival that brought thousands of people to Haddon Avenue to kick off a weekend of events.

“So many people shared that it touched them in a way that we could never have imagined,” said Michele Messer of the Haddon Township Equity Initiative (HTEI), which coordinated the festivities.

“That was enough fuel to keep us going into the next year,” Messer said, “and certainly the legislative movement across the country is extra fuel and fire to create spaces where people can feel comfortable and safe.”

For as far as U.S. law has come in safeguarding the rights and freedoms of people who don’t identify as heterosexual, there has been a nationwide backlash of political groups seeking to roll back those protections.

According to the Washington Post, lawmakers across America have introduced some 200 bills at the state level “that seek to erode protections for transgender and gay youth or restrict discussion of LGBTQ topics in public schools.”

In such an environment, celebrations of LGBTQ+ culture can do more than the important work of helping people find representation among their peers. Pride can be a flag in the ground, but it can also be an icebreaker for discussions across social groups; one that helps demonstrate the value of celebrating community and being uplifted by it.

“What Haddon Township has demonstrated is this is something that every town can do, and should do, and it feels good to everybody; that the work pays off tenfold,” Messer said. “We’ve all given ourselves permission to take the steering wheel in our communities, and decide how we want things to be, and I think it’s contagious. 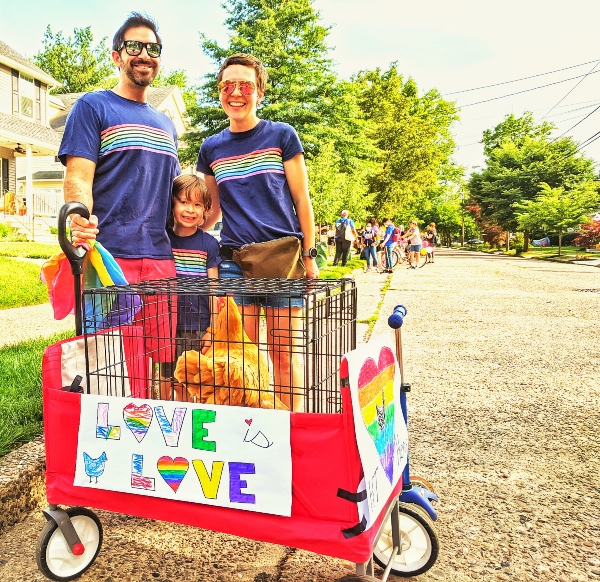 “Pride is not just for cities, it’s for small towns, too,” she said.

“People should feel that communities are open, and there are options for everybody.

“What we hope to do and want to do is to signal to other people that we like you, we want you here, and this is a place where you can feel free to live authentically,” Messer said.

In addition to a weekend of events that kicks off with a Haddon Avenue parade, Haddon Township will host a community night at Haddon Square from 5:30 to 9:30 Friday, and Pride Fest at the SoHa Arts Building from 12 noon to 4 p.m. Saturday.

To Messer, events like these have become the blueprint for others in neighboring communities not only because Haddon Township has supported them, but because HTEI has done what it can to help others replicate their success elsewhere.

“We popped up, we reached out a hand, they’re reaching back, and there’s a community of change built around this,” she said. “The change that we’re hoping to create by virtue of these celebrations is at all levels of community life: in schools, in our law enforcement, fire department, community services. We’ve connected with all aspects of community.

“Our hope is not just to have this great, fun weekend, but to energize people to continue the movement beyond the weekend coming up.”

In Collingswood, the newly convened Collingswood Pride Council intends to extend the atmosphere of Pride throughout the year, with a celebration this weekend and another built around National Coming Out Day in October. 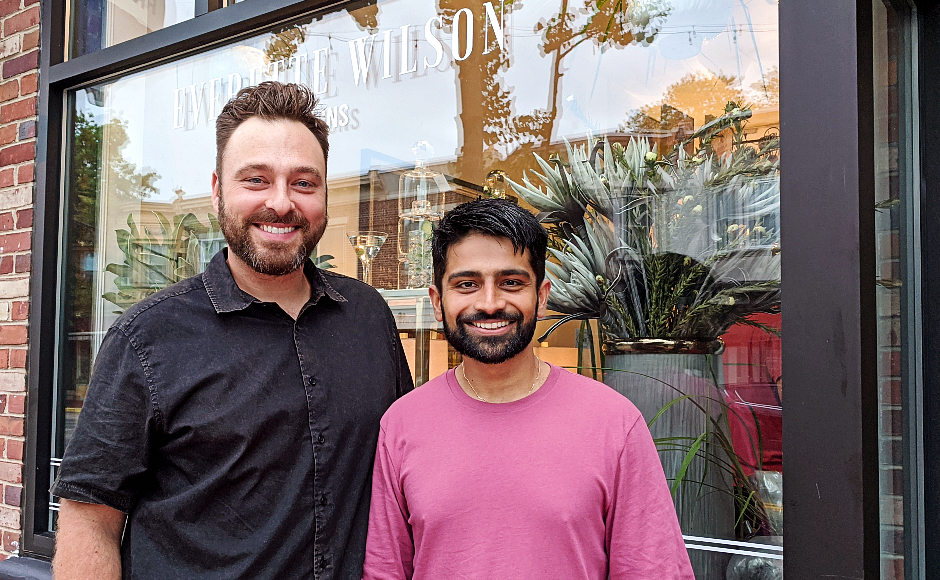 Co-founder Ben Moore described the council as a community-based advisory group, the mission of which is to foster “a safe and inclusive, welcoming environment for the LGBTQIA+ community.”

Members have met biweekly since its formation in the spring, and the group is working to build a calendar of events.

Moore envisions the council as filling in around the edges of the work that other community leaders are already doing in the borough and beyond.

Although the group is centered in Collingswood, it welcomes members and support from neighbors anywhere in the area, Moore said.

“We needed an advisory group that’s going to spearhead events, ensure that we’re reaching out to community members, and providing a safe space for people in neighboring communities who don’t have a safe space to go,” he said.

Moore, a native New Orleanian, is no stranger to the need for a big celebration. But he hopes the Pride Council can help work to cut through an atmosphere of uncertainty for people who don’t fit in a heteronormative worldview.

“Discrimination is still very real and alive today,” he said. “[We’re]  all about providing a safe space where people can come and meet other people who identify in ways that they do, and can connect with them on a social, personal, professional level.

“It’s about taking a macro and micro perspective on what it means to be inclusive for the gay community, and trying to enhance and promote that as much as possible,” Moore said.

The first Collingswood Pride Council event coincides with Second Saturday in the borough. From 5 to 9 p.m., the group will set up a party along Irvin Avenue from Haddon to Atlantic Avenues, featuring vendors, musicians, speakers, and a drag show. In addition to entertainment, the event also will offer health and community education. 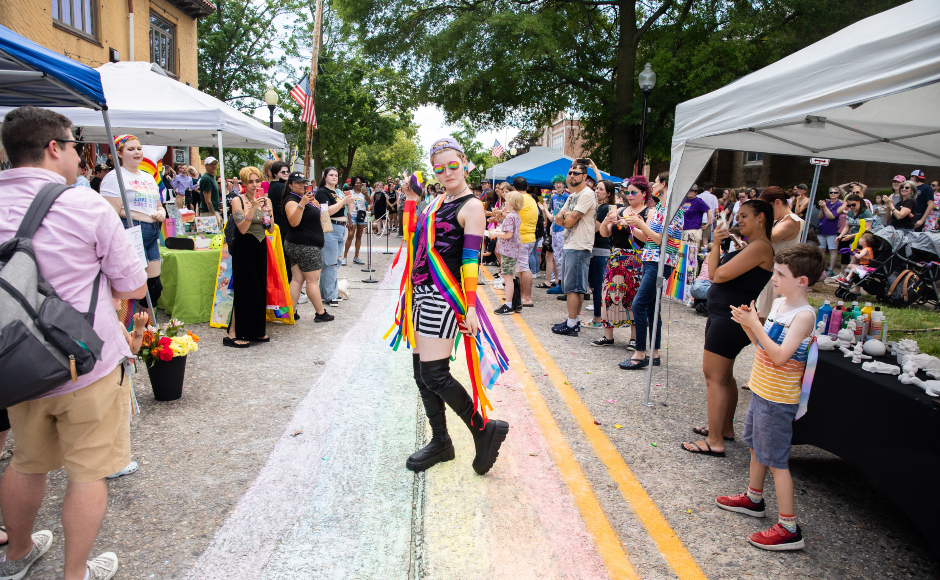 In Merchantville last weekend, Carolyn Busa of PEAK Secondhand leveraged her vintage clothes closet to host a “rainbow runway” fashion event. It was one of the first public Pride celebrations ever to be held in the borough, and Busa said the response demonstrated a local appetite for more.

“Someone from the crowd said to me that there was a thirst for this in this town, and it showed,” Busa said. “It meant a lot to hear that. I’m still coming out of the coma of the fun that it was.”

Busa said she took the inspiration for her own Pride event from the success of the Haddon Township celebration of 2021. By inviting people from across Merchantville and neighboring communities to participate as models, she said her goal was “to bring that energy to Merchantville.

“To see the celebration next to the town where I grew up, how much it’s grown, was just so cool,” Busa said. “The more events there are, that’s what it’s about. More people having events and just being happy.”

Beyond just being happy, Pride events also help set a stage for people of all gender identities to see themselves represented in the community. For Busa, that’s as important as putting on a fun, high-energy fashion show.

“I had a few people tell me that was their first Pride event,” she said. “It’s everyone’s event.

“If this little event, or others that people attend, help them feel better about themselves, it’s an event where they can grow to love themselves more,” Busa said. “It’s all going to add to that journey.”

Merchantville will follow up Pride at Peak with a Pride Night celebration on June 15 at the borough community center. From 5 to 7 p.m., the celebration will offer local resources, activities for attendees, and the first Drag Queen Story Time event in Merchantville.