Trending
You are at:Home»Schools»Collingswood»Referendum Redux? Collingswood BOE Marks $750K for Stadium, but no Plan
Despite the failure of its athletic facilities referendum in March, Collingswood schools will likely send voters to the polls again after tabbing nearly 70 percent of its capital surplus to fix a crumbling stadium. 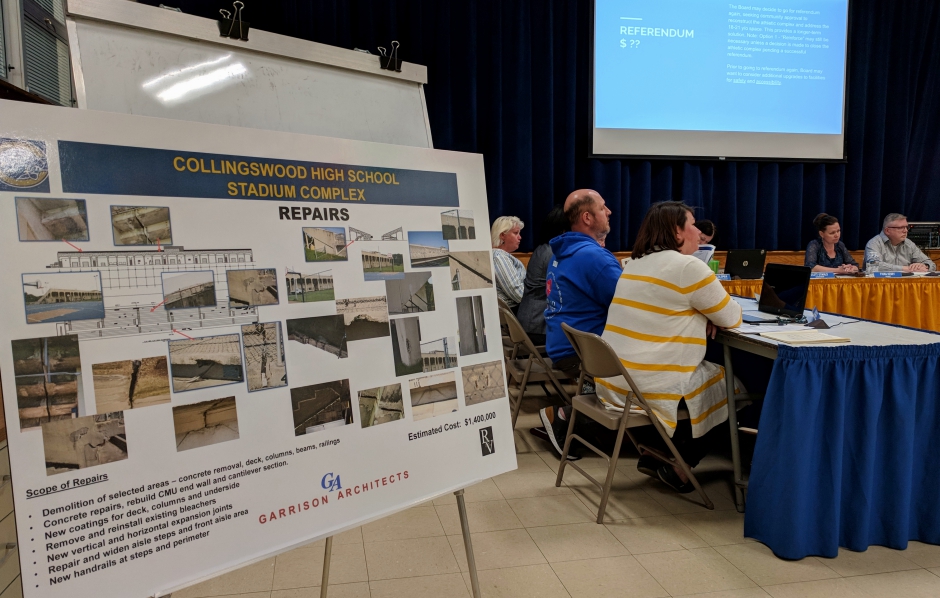 At a special meeting of the Collingswood Board of Education, members discuss strategies for addressing the district high school athletic facilities. Credit: Matt Skoufalos.

The Collingswood school board likely is headed for another referendum to address its aging athletic infrastructure.

After a $13.9-million project was shot down by a wide margin last month, the district has been left to draw down its $1.1-million capital reserve by $750,000 for the reinforcement, repair, or demolition of its WPA-era high-school stadium.

And, as Superintendent Scott Oswald noted in a special meeting of the board Monday night, those funds do nothing to address the debilitated condition of its athletic fields.

“We have two issues,” Oswald said: “Big Concrete Monster that isn’t safe, and fields that are really overused.”

Up against a deadline for the submission of its annual budget, the board was conducting its first public discussion of the stadium question since the vote. The chatter covered options for remedying emergent issues at the athletics complex as well as the limited resources available for the task.

Buildings and Grounds Supervisor Al Hird reviewed a trio of options he outlined as “the Three R’s:” reinforcement, repair, or referendum. The first two solutions offer limited lifespans; the third requires regrouping a voter base that roundly rejected its last proposal.

Reinforcement, the cheapest of the solutions Hird outlined, would cost an estimated $250,000, and buy the district about a year. It involves deploying 360 feet of heavy-duty debris netting “just to catch any sprawling or falling concrete” from the stadium, Hird said. 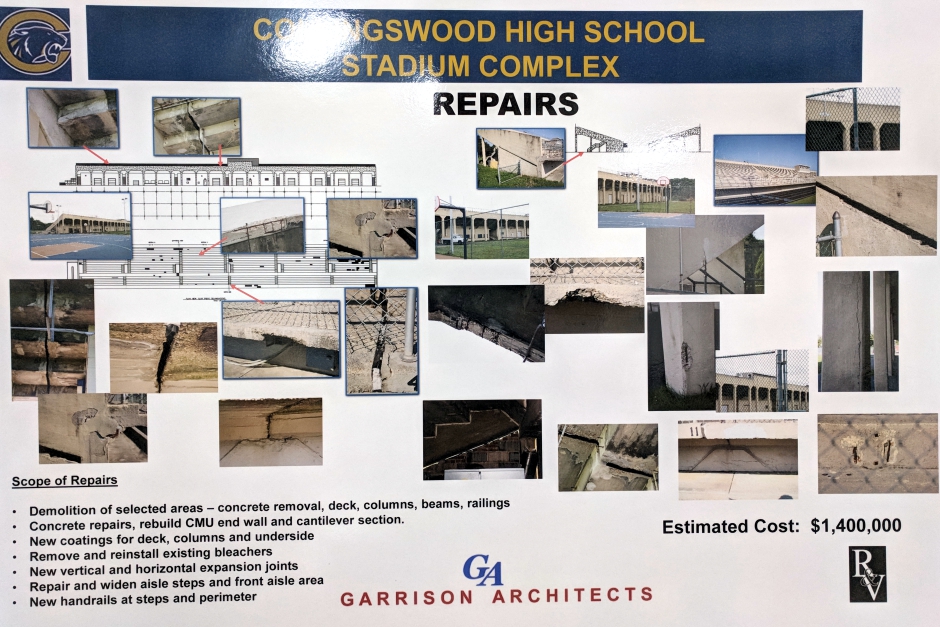 It would also add steel posts and horizontal beams to the cantilevered walkway of the structure, and brace the concrete block wall at its stair towers, which are no longer attached to the stadium.

The “repair” project, a $1.4-million fix, would make the stadium compliant with the Americans with Disabilities Act (ADA), changing out brackets, railings, ramps, and seating; repairing exposed concrete, demolishing weak areas of the structure, and adding expansion joints.

Hird said the district could potentially get seven to 10 years out of that solution.

“We could close the stadium down to reinforce it; get a contractor in before the summer,” he said. “The ‘reinforce’ option is not a long lifespan. You’ll get at least this whole year out of that, and it’ll give you time for conversation.”

The third “R,” another referendum, the board seemed keen to pursue in the absence of other comprehensive solutions. But again, the conversation quickly turned thorny.

Pointing out that “the world has changed somewhat dramatically,” Oswald noted that any capital improvements might include security vestibules as well as ADA-compliant access points for the district elementary schools.

“As we increase our discussions of equity across the board, that’s something you should consider,” he said. 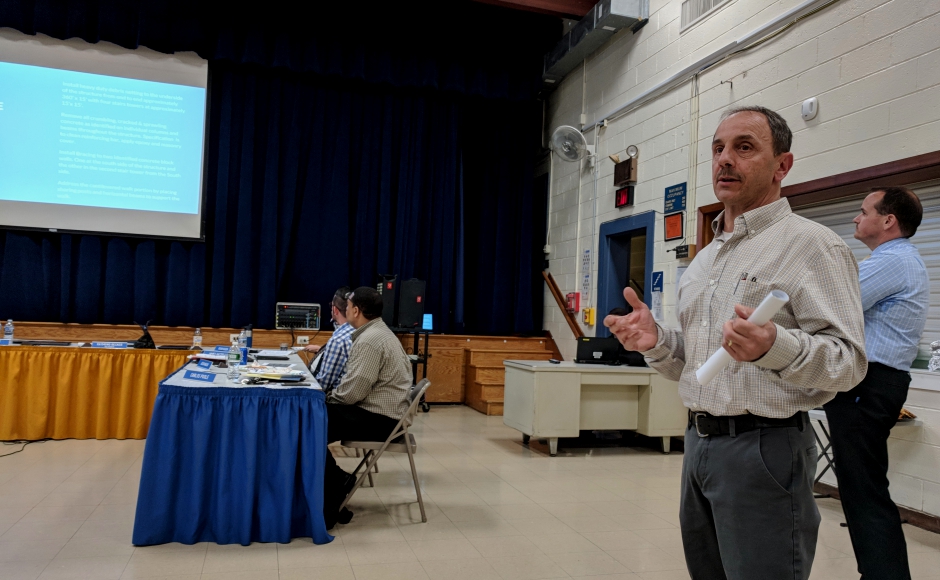 Collingswood Schools Buildings and Grounds Supervisor Al Hird addresses a special meeting of the board of education. Credit: Matt Skoufalos.

“I don’t want us to rush a timeline on this referendum because it’s what we have on our hands.”

Board member Clinton Connor said the body should entertain “a long conversation about what the district looks like in 10 years” at the beginning of any referendum process.

“Are we going to be a consolidated or regional district?” Connor said, arguing that most of the best facilities emerge in larger school districts, where such costs can be more broadly distributed.

Board member Jim Hatzell said he’d like the district to demolish the stadium altogether, reasoning that the $500,000 estimate for doing so is comparable to $250,000 projected cost of the reinforcement bid.

“In just about every referendum [scenario], the stadium will have to come down,” Hatzell said. “We’re talking about a half-million to demolish versus $250,000 for a patch.

“It’s a lot of money if you look at it as a band-aid, but it’s worth it to keep our fields open,” said Board President Fiona Henry. “A referendum is going to take at least a year.” 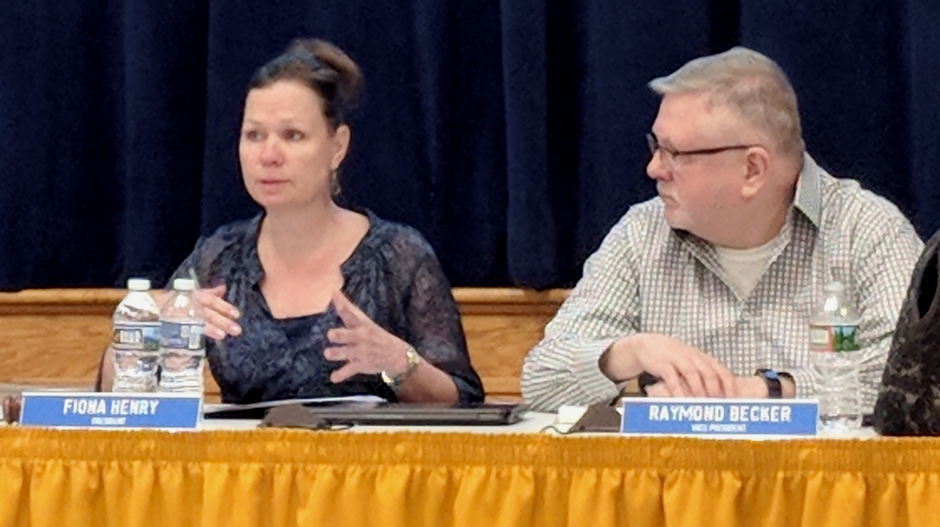 Even spending a half-million to demolish the structure doesn’t reflect the true cost of the project, Hird said, because the district would still have to rent bleachers, portable toilets, and storage sheds, all of which functions are covered by the stadium.

Neither would those funds address the condition of the athletic fields themselves.

Oaklyn Board of Education President Bill Stauts said he’d like to see the borough kick in some municipal dollars, as has been done in Cherry Hill and Haddon Township.

“Collingswood itself, and the mayor who opposed the bond issue, spends nothing on it,” Stauts said. “Knight Park is a separate entity. Get the borough involved; it’s not just the Board of Education’s problem. You can’t have a grass field used 12 months a year. You need help.”

In any circumstance—closing, renovating, or demolishing the stadium—“we are still limiting the participation dramatically for two years,” said Board Vice-President Ray Becker.

“If we could extend some limited play, I’d like to do that,” Becker said.

Until repairs are made, Oswald said that the district has begun rote denials of requests to use its athletic facilities by any non-school groups. That includes the district-supported intramural youth football program, which happens to be one of the most intense users of the grounds.

That program can run for 12 hours on Saturdays, with the bulk of activity taking its toll between the 40-yard-lines, Hird said. Oswald added, “There is nowhere else for them to play.

“That’s a program that’s changing lives,” the superintendent said. “There are options for other sports; the only option can’t be our fields.”

The board ultimately decided to earmark $750,000 of its capital reserve to address its facilities issue, tabling the whys and wherefores for a future discussion.

The district already had set aside $187,000 in its upcoming budget to replace the main electrical service panel in the middle school boiler room, funds that business administrator Beth-Ann Coleman said she could shift around to accommodate the draw-down.

The moves would leave $250,000 in its maintenance reserve and $350,000 in its capital reserve while still accomplishing the electrical fix. Nonetheless, Coleman lamented the depletion of the $1.1-million fund just a year after the district had suffered a loss in state aid and a prior confiscation of some of its cash reserves.

CORRECTION: An earlier version of this story reported that Collingswood youth football has access to the school athletic fields. Neither that program, nor any other unaffiliated directly with district sports, currently does.