The once-dormant market for vinyl records is suddenly booming, thanks to a consumer base that’s catching up on new releases and back catalogues of classic material. 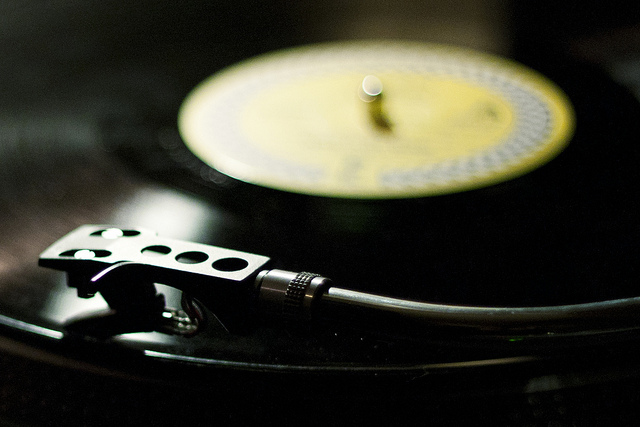 There was a time, somewhere around the year 2000, when owning a record shop could have been considered as sound a financial prospect as Pets.com, Enron, or the XFL.

Today, however, not only is the vinyl businesses the only one of those four still capable of drawing revenue, but it’s actually enjoying something of a boom.

Last year, media analytics firm Nielsen reported that vinyl LP sales had enjoyed a ninth consecutive year of growth, tripling from the 2.8-million-unit mark in 2010 to a record-setting 9.2 million units sold in 2014. More than half of those, or 5.2 million albums, were sold at independent record stores, which also enjoyed a record-setting year.

That could explain how shoppers in South Jersey—who, through those dark times, had resupplied their collections at stalwarts like Tunes in Marlton or the Philadelphia Record Exchange—are enjoying a sharp and immediate uptick in the number of local folks stocking stacks of wax. A quick visual survey of 2015 Record Store Day participants nets no fewer than 10 indie shops from Berlin to Bordentown. Three of them now operate along a two-mile stretch of Haddon Avenue from Collingswood to Haddonfield, with two of those having opened their doors within the past month.

Plastics haven’t been this lucrative since The Graduate. 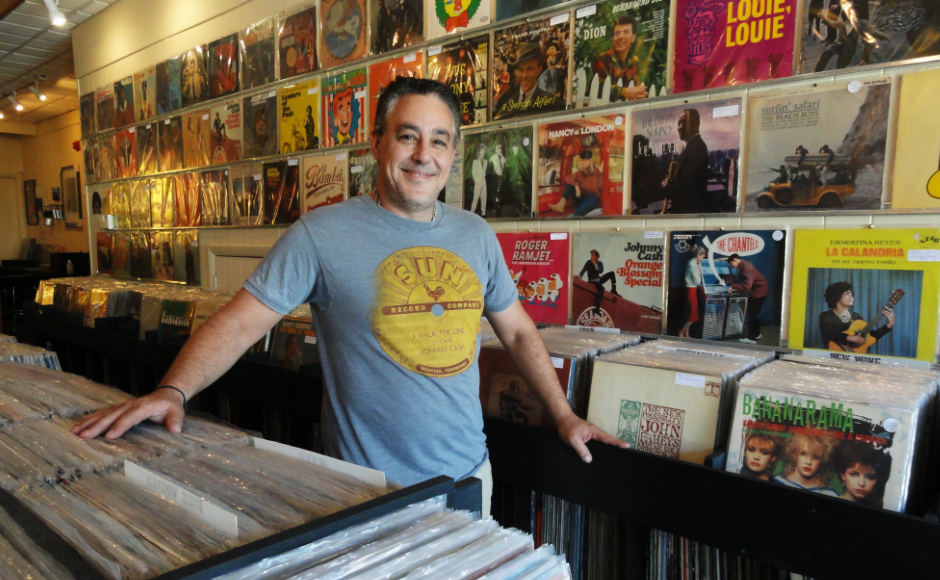 ‘My heart is in the format for the format’s sake’

One of the newcomers to the neighborhood, Dave Frankel, moved his shop, Inner Groove Records, from Merchantville to Collingswood in mid-August. Ask him why vinyl is suddenly hot, and the 40-year collector shrugs.

“I never left it,” he said. “I’m 48, and I still have a few records in my collection at home that I bought when I was 10. I don’t know if that makes me different or the same.”

Unlike video, which has improved in resolution from the 300-line television broadcasts of the 1980s to the high-definition signals of today, “audio is the only technology that went backwards,” Frankel said.

“Eventually, six, seven years ago, people started to notice it,” he said.

The spiral started when records yielded to the smaller form factor of cassettes, which were more convenient for car travel, but the sound of which could be subject to distortion. Compact discs reversed course, advertising “perfect sound forever,” while enticing music lovers “to re-buy everything you had for $17.99,” Frankel said. 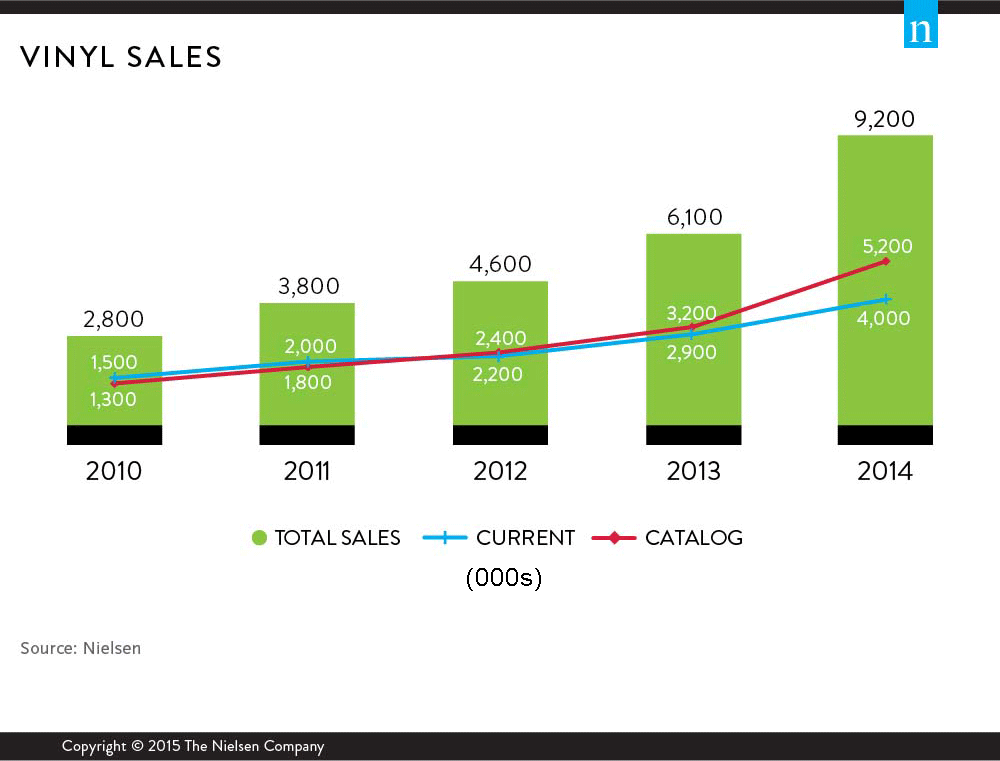 That market collapsed during the rip-and-download digital era, which sacrificed CD-quality audio in favor of a compressed music file that was more easily shared, stored, and streamed.

Conversely, with a nigh-limitless catalog of music just a few clicks away at any moment, the market had finally reached a point where purists could afford to be pickier about what they chose to spend their money on.

“[The work of] every classic artist, whether it be John Coltrane, The Who, The Jam; it was released on vinyl, mixed, recorded, and mastered to be released on a vinyl record,” he said. “To hear it the way it was meant to be, the way it came out initially, is a different experience.”

That experience extends from the artwork of a vinyl record, which is at once hand-held and sweeping, to the typical full-side listen it engenders (compare the exercise of needle-dropping with the push-button ease of bypassing a digital track). 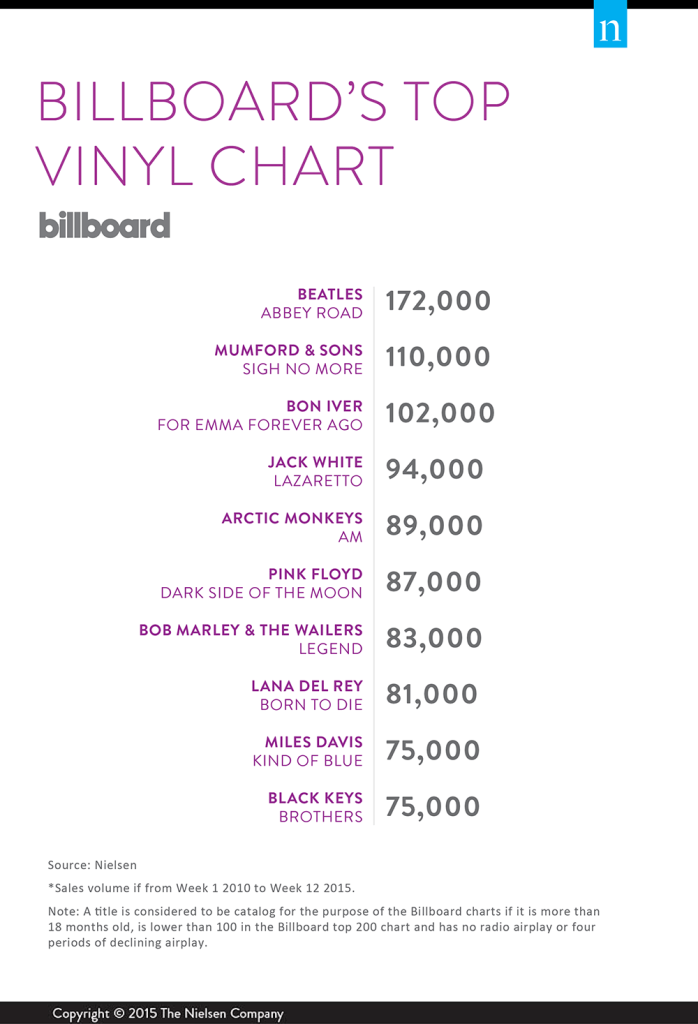 For a time, the collectability of vinyl was also fueled by scarcity, but re-issues have mitigated those effects. And although “almost every new release comes out on vinyl,” Frankel knows that “it will never come back as the go-to format.

That lack of mainstream popularity may be an issue of perspective, however. Frankel refers to audiophiles like himself as “niche” and “clique” and “cult,” and were he only considering total sales, the numbers might bear that out.

Last year’s biggest vinyl LP, Jack White’s Lazaretto, would have accounted for only 6 percent of those of the top-selling digital album of 2014, Taylor Swift’s 1989.

But Nielsen figures suggest that, since 2010, the tastes of vinyl buyers have been fairly split between contemporary and classic recordings. Four of the 10 biggest movers in the past five years have been The Beatles’ Abbey Road, Pink Floyd’s Dark Side of the Moon, Bob Marley & The Wailers’ Legend, and Miles Davis’ Kind of Blue (the other six are by Mumford & Sons, Bon Iver, Arctic Monkeys, Lana Del Rey, Black Keys, and Jack White, who clocks in as the elder statesman of the group, with a breakthrough album as old as 2001).

That may be because vinyl customers are themselves an equally mixed bag.

At Collingswood Music, Ted Velykis said his patrons include lifelong collectors as well as youngsters who are just starting out and want to “buy up all the staples.

“Boston and Elton John are in a lot of people’s record collections, and now we can supply these kids with all the classic rock they could ever want,” Velykis said. “It’s a generational thing.” 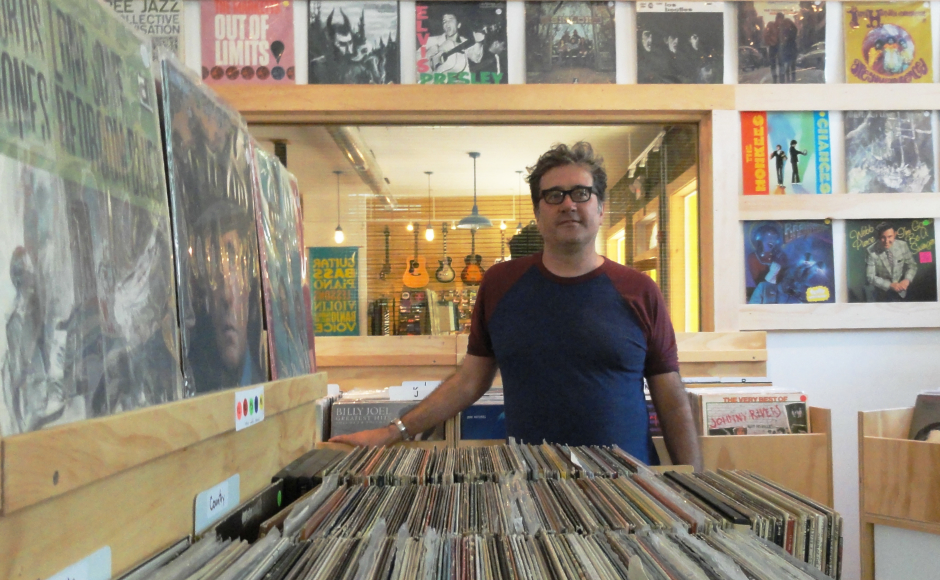 Like other vinyl retailers, Velykis buys individual records or complete collections, and tries to stock an inventory that mixes in customer favorites, be they new records or re-releases.

“You can get really rare stuff re-pressed,” he said. “It’s still hard to keep up with. We’re definitely starting to carry more new vinyl [as well], and you can fill in the gaps in your new selection. You can always keep the store kind of hip; make sure you’re not picked over.”

Rekindling the hobby also has re-created the atmosphere of the neighborhood record shop, the quirky, in-group culture of which was chronicled so lovingly in Nick Hornby’s High Fidelity. Velykis’ customers include people “taking a trip down memory lane” as well as newcomers to the medium. Some will shout, “Look at this one!” across the aisle to a friend; others will ask a staffer to spin an album on one of the house turntables before buying, he said. A small lounge area fosters deeper conversations among members of either camp.

It’s exactly the kind of shop Velykis would have frequented in his 20’s.

“I was trying to set out to give young people today a little taste of what we had,” he said. “It is a shame it died out, but now it’s back, and it’s great.

“I think that’s the case with records in general,” he said. “People never wanted to let them go.” 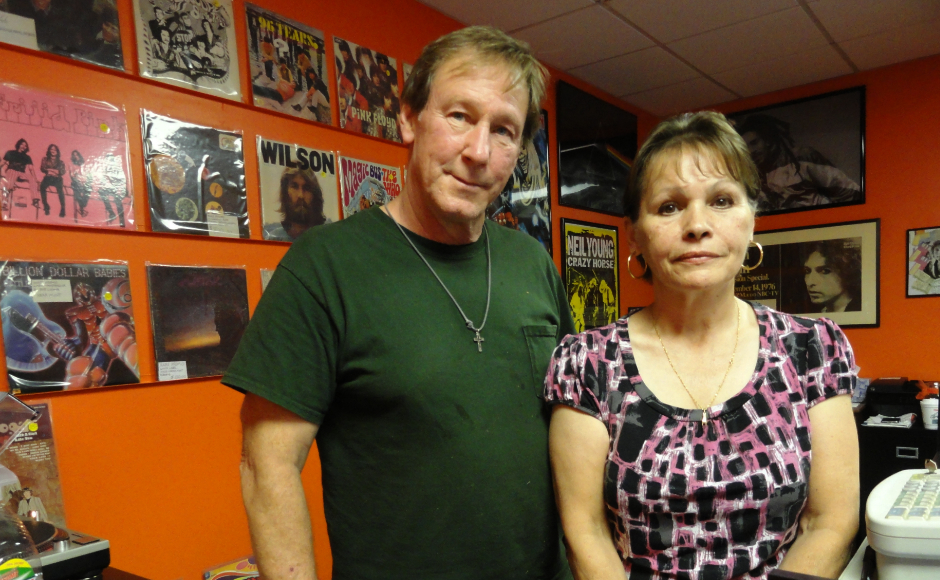 For Mark and Liz Stevens of Cinnaminson, vinyl forms an intergenerational connection from customers of their age bracket to the novice collectors of today.

The couple, who opened Haddonfield Record Exchange over the weekend, says a youth culture that is fascinated by vintage artifacts enjoys the throwback appeal of records, turntables, and 60’s rock icons.

“They like the crackling of the records, they like the artwork, and they like the past,” Mark Stevens said. “I’m from the past. I think the music of the past had a hell of a lot more to say than a lot of it today, and I think they’re looking for that.”

As much as her younger customers enjoy sampling the touchstones of the Woodstock generation, they also come in for jazz and Rat Pack standards, Liz Stevens said. She believes the new breed are turning to vinyl for its decades-old catalog; music that “had a lot to say about the world and how people felt, where we were going to go in the future, and how we were going to get there.

“We were going to make a better place,” Liz Stevens said. “They’re going to find the message in the music.” 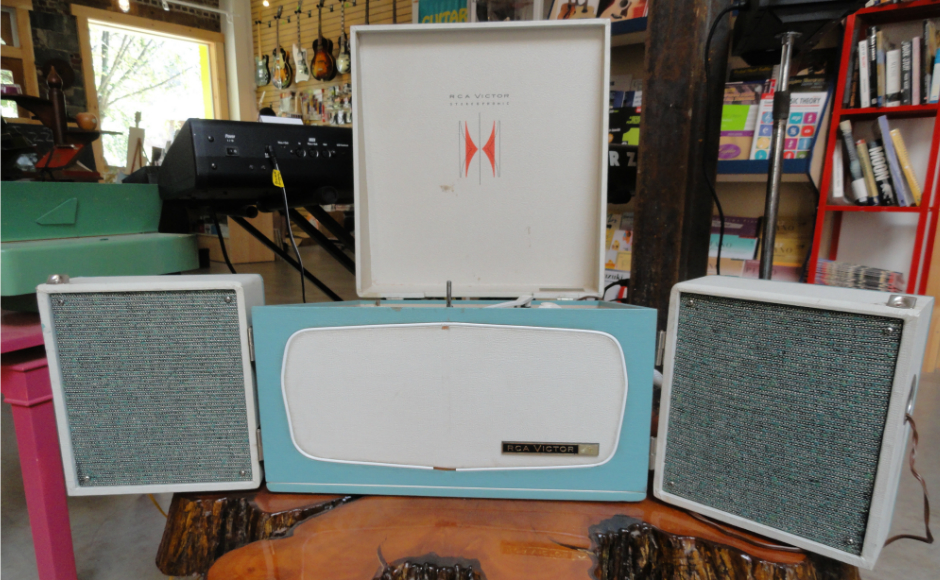 In addition to stocking vinyl, both Inner Groove and Collingswood Music offer turntables and other audio equipment, too.

Frankel, who once managed a few Bryn Mawr Stereo locations, is an authorized dealer for Music Hall, Creek Audio, Goldring and other equipment manufacturers; he says Inner Groove sells about one of the Music Hall MMF-2.2 record players a week.

Velykis usually has an inventory of vintage equipment in stock, be it an antique-but-still-functioning Victrola, rack-mountable components, or suitcase players. When you’re dealing in vinyl, selling even a re-issued suitcase player, can help pad the register on a day when business has been limited to the dollar-bin pickers.

But Frankel said that if a record shop is doing things right, its vinyl inventory will protects its bottom line more than anything else. His best customers “value the experience the way I value it,” he said, which is why Inner Groove carries records, stereo equipment, and little else. Keeping a narrow focus also allows Frankel to control his costs and function as a destination retail outlet.

“We don’t do CD’s, posters, t-shirts, potato chips, coffee, and I’m not a WiFi café,” he said. “I’m not battling the Internet; I’m not battling CD’s. We do one thing, and we do it that way because that’s where my heart is.

Collingswood Music is located at 9 Lincoln Avenue in Collingswood, open 12 p.m. to 8 p.m. Monday through Saturday, and 12 p.m. to 4 p.m. Sunday.