Trending
You are at:Home»People»‘This Time, We Are the Asteroid’ – Rowan Fossil Park Offers Perspectives on Extinction

A marl pit in Mantua holds fossilized and geological evidence of the dinosaurs’ final moments—and of the precariousness of existence for everyone after, says Rowan University researcher Kenneth Lacovara. 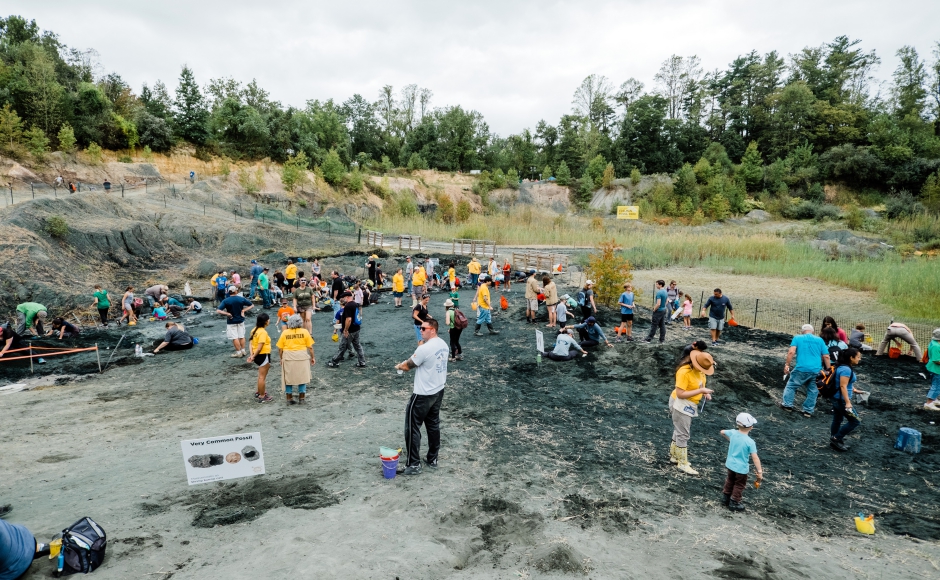 It’s a detail worthy of Douglas Adams or Kurt Vonnegut that some of the deepest mysteries on the planet—like how the dinosaurs died—might be stashed behind a couple of big-box stores in South Jersey.

And it would equally befit the sarcastic wit of those writers if the answers to such questions were overlooked by the descendants of the shrew-like mammals that took over the planet afterwards.

But one of those rascally warm-bloods (and a South Jersey native to boot), paleontologist and geologist Kenneth Lacovara is leading the charge to make sure those precious discoveries aren’t lost to the ages.

Lacovara, an Explorers Club medal-winner, moved to Rowan from Drexel University in 2015, having spent more than a decade digging out fossils from a former mining site in Mantua. Its owners, The Inversand Company, had kept it operational since the discoveries were made there in the 1920s, but couldn’t sustain the cost of withdrawing groundwater from the site nearly 100 years later.

Rowan purchased it for just under $2 million in 2015, and then a year later, alums Ric and Jean Edelman pledged a $25-million gift that “set us on a trajectory to develop this site and build a museum,” Lacovara said. The fossil park that will bear their name is scheduled to open in 2022, offering what he describes as “a research site of global importance” and our “best window into the last moments of the dinosaurs.”

For nine years running, Lacovara has hosted community dig days at the site, most recently last Saturday. Guests who are willing to get their hands dirty for an hour or so may leave with a remnant of ancient, local history—and a sense of themselves in its narrative. 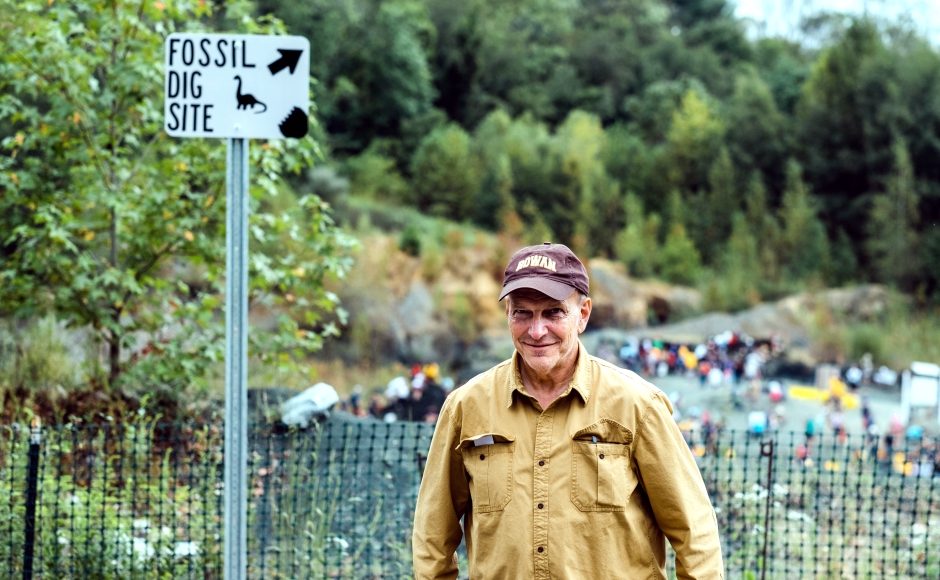 “They start to see themselves as part of this tapestry that is Earth’s history,” he said.

Lacovara believes the work being done there will “put details to the terrible moment when 165 million years of dinosaur hegemony collapses.

“Do we have that moment recorded here?” he said. “It looks like we do.

“We have reams of data, and we’re close to publishing the results.”

“The terrible moment” to which Lacovara refers is the theoretical impact of a colossal asteroid that scientists believe struck the Yucatan peninsula about 65 million years ago. He tells the story in approximations, if the impact of such a cosmic event can be grasped at all.

The asteroid was “roughly the size of Philadelphia.” It entered Earth’s atmosphere at “25 times the speed of a bullet” (about 45,000 miles per hour) near what is now the Mexican town of Chicxulub.

It left a hole “about the size of Massachusetts” and 12 miles deep, plunging the planet into chaos.

The epicenter turned into plasma in an instant, and then “a lava sea,” Lacovara said. Environmental effects spiraled out from there—tsunamis, magnitude-10 earthquakes, global forest fires, landslides.

Temperatures around the planet rose to “somewhere between a toaster oven and a pizza oven,” he said, ejecting particulate matter into the atmosphere that rapidly cooled the atmosphere almost as quickly as it had heated up. 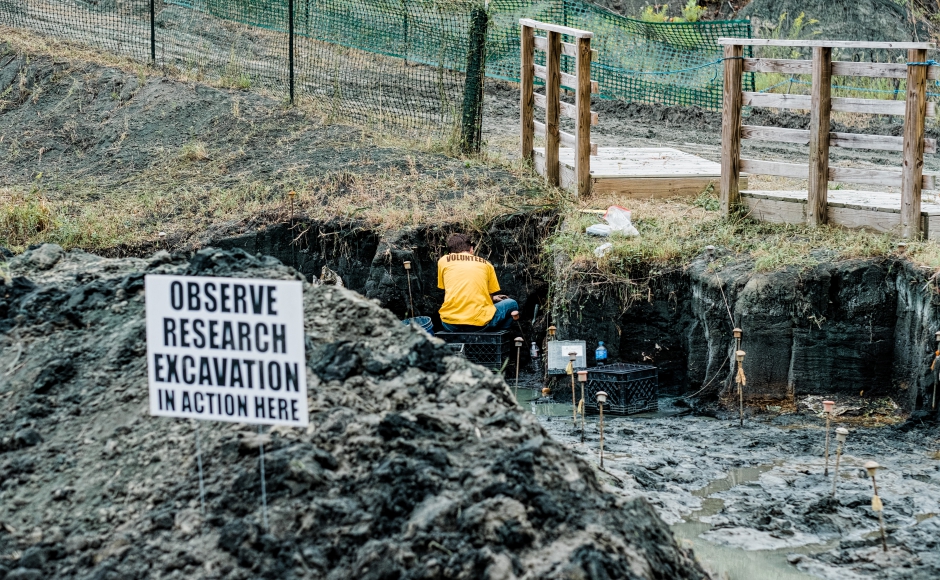 The Edelman Fossil Park at Rowan University contains a research component that is inaccessible to the public. Credit: Tricia Aspinwall.

“Once that dust is in the atmosphere, temperatures go from a pizza oven to a refrigerator,” Lacovara said.

In that geological instant, 75 percent of all species on Earth were lost, opening up niches for humanity’s mammalian ancestors to take over.

“That doesn’t happen unless that asteroid hits the planet,” Lacovara said.

At the moment of that impact, the marl pit in Mantua was an ocean that supported a variety of life.

By exhuming their remains, researchers hope to contextualize the story of their death in a way that can offer meaning to the life forms that have followed in the ages since.

“Everything around us is so contingent on what’s happened in the past,” Lacovara said. “I’m hoping when people come here, they can see that for themselves.

“We really want people to understand they’re part of something much larger,” he said. “Earth is fragile and easy to damage. If we’re not careful, we can put its systems out of balance such that it can’t recover within a lifetime.”

He’s speaking, of course, of the catastrophic effects of rapid climate change accelerated by human behavior; effects that could destabilize the environment so much that, even if life itself persists, “economies and governments can’t survive that change.” 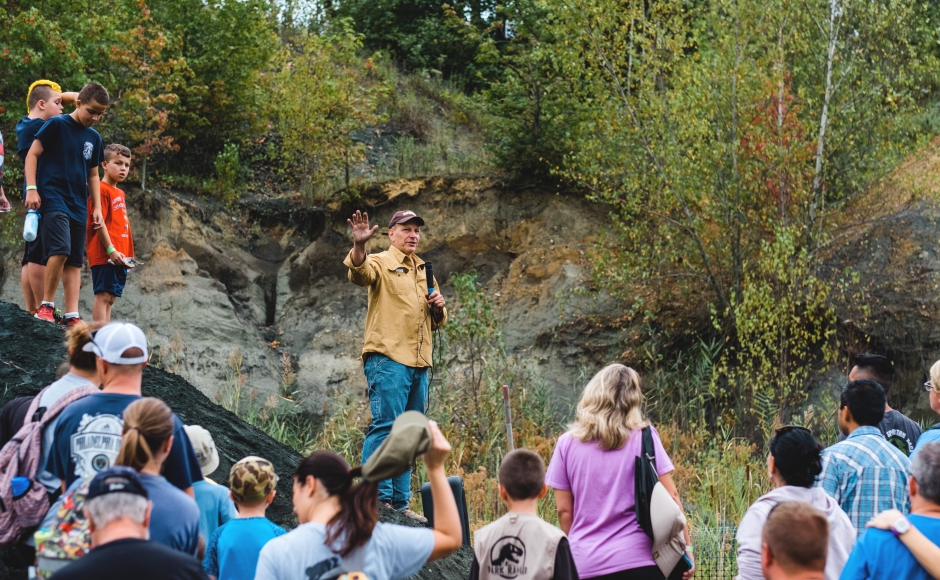 Just as the 165 million years that dinosaurs enjoyed vanished in an instant, “a good environmental future is not our birthright,” Lacovara said.

“If we want to maintain our quality of lives, that’s dramatic change,” he said.

This time around, Lacovara warns, “we are the asteroid.”