The 26-year-old Haddon Township man left his family home Thursday morning with the hopes and dreams of a community on his shoulders. 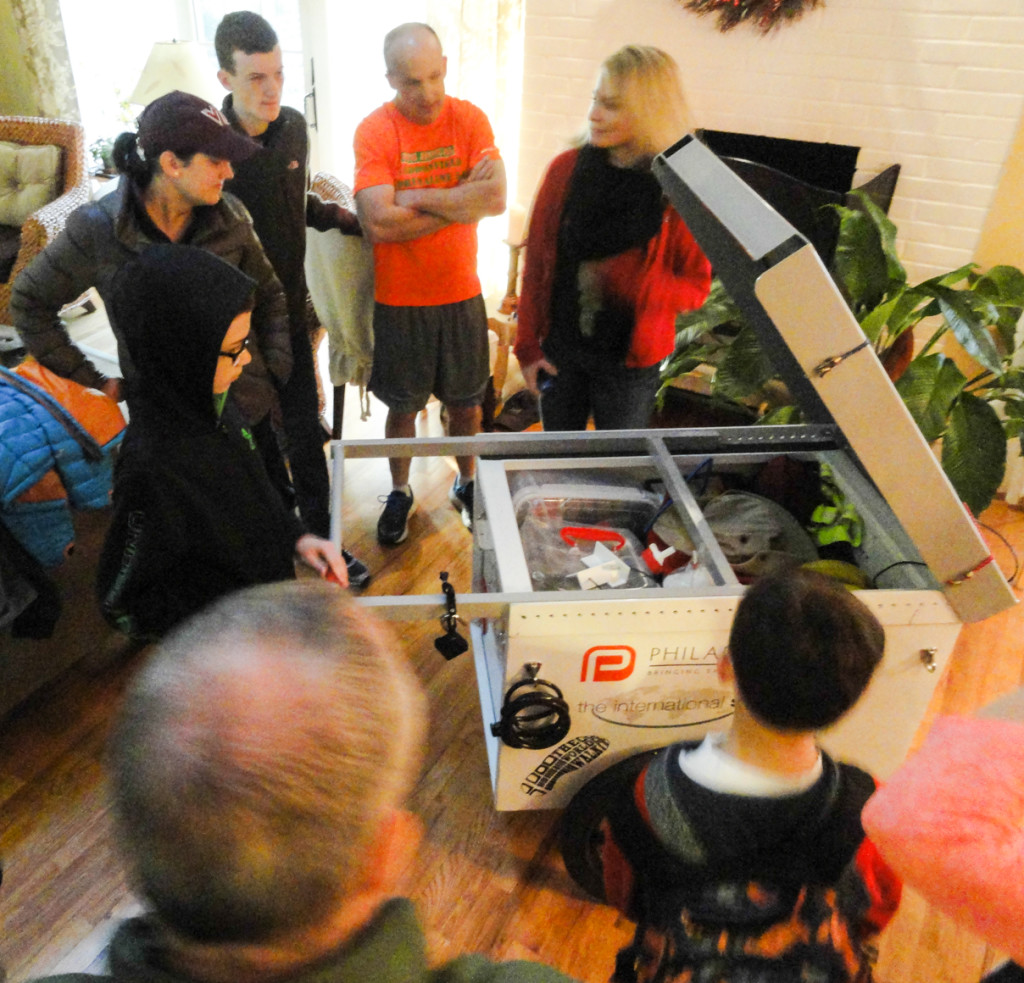 A down jacket. Trail running shoes. A five-gallon jug for water.

On Thursday morning, Turcich’s friends and family gathered to see him off on the World Walk, and peered with curiosity at the meager contents of the hand-made aluminum cart that will be his supply chain for the next five years.

Fabricated at The Factory in Collingswood and souped up by the shop at Philadelphia Sign Company, Turcich’s financial sponsor, the cart—like him—is lightweight, rugged, and departs Haddon Township bearing the goodwill of a community that feels personally connected to his journey.

“I was lying in bed last night thinking, ‘What the hell have I gotten myself into?’” Turcich confessed for a second.

And then, more assuredly, he steeled himself. 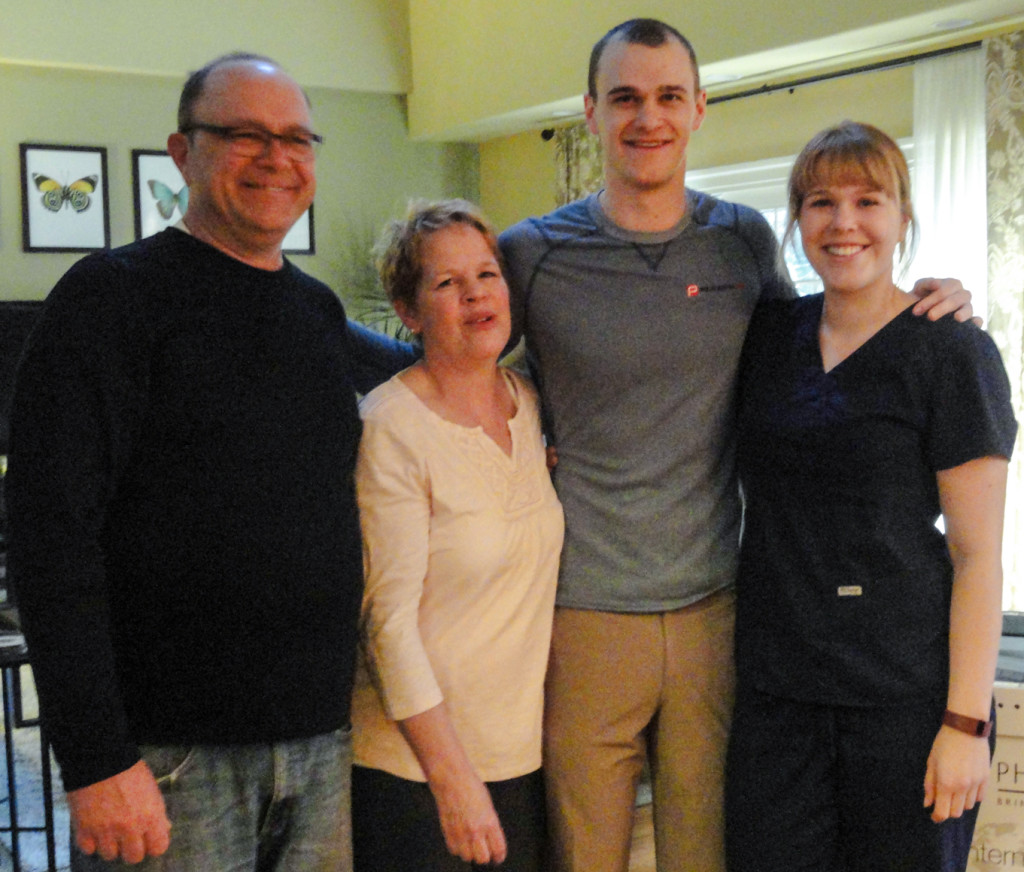 His sister, Lexi Turcich, said the family shares that outlook.

“He’s been talking about it for so long; it’s what I think of when I think of him,” she said.

“It inspires me to make something of my life as well, and [to]do what makes me happy.”

His father, Tom Turcich, Sr., said that his message to his son was, “stay happy [and]spread some goodwill.

“I think people lack any thought of adventure anymore. I think they’re living through him a little bit.”

Bob Mehmet, president of Philadelphia Sign Company and a Haddon Township resident, said he was drawn to Turcich’s story not only because of the young man’s sense of the possible, but because his own children were close to Turcich’s late friends and classmates, Annemarie Lynch and Shannon Newell.

Lynch perished in a jetski accident in 2006 at age 16; Newell was 19 when she was killed in a 2009 car accident. Turcich said their young deaths fuelled the urgency of his own ambitions.

“If this was a trip just for the experience and the experience only, that would be different,” Mehmet said. “That he was so touched by the fact that he could actually give back to the girls, that’s what drove me to it.” 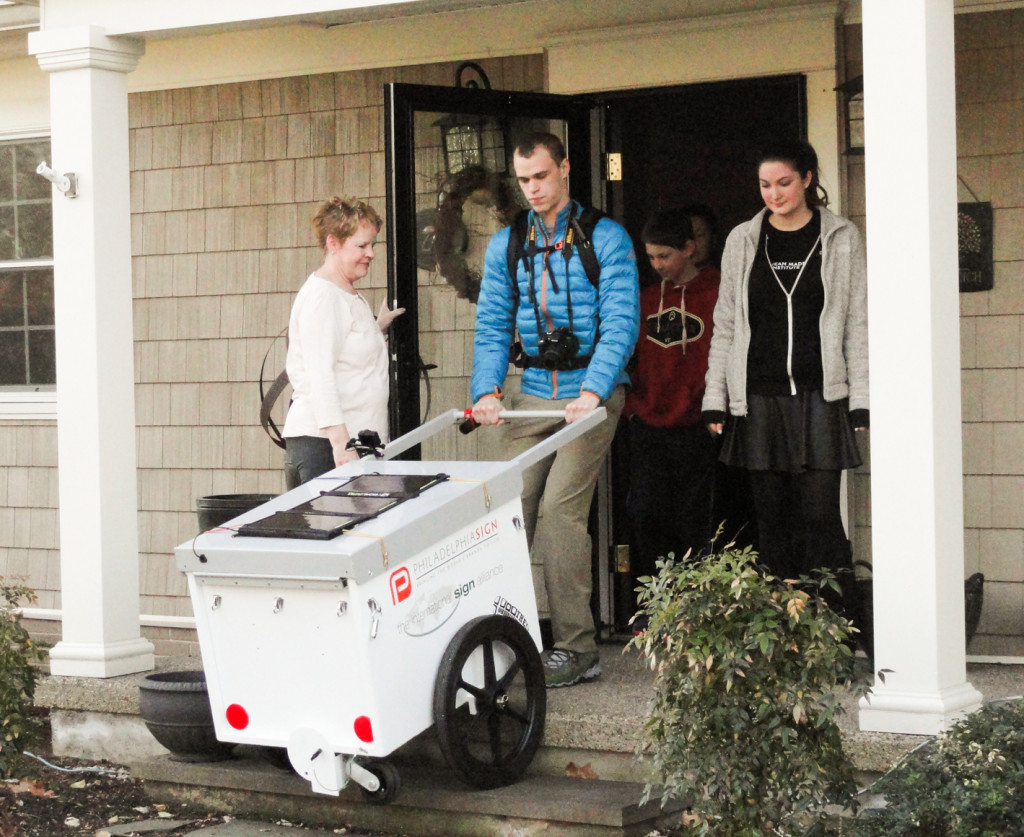 Through the World Walk, Philadelphia Sign Company will not only provide Turcich with financial support from afar, but will donate money for every mile he walks to memorial scholarships in Lynch’s and Newell’s names.

“We wanted to keep him supported monetarily so if he needs to get out the weather, he can do that now,” Mehmet said.

“On top of that, for every mile he walks, money goes to the two scholarship funds.”

In addition to providing a cushion of resources that will help sustain Turcich along the way, Mehmet said that his professional network of business contacts would also be available as a safety net.

“We have a lot of contractors throughout this country and the world,” Mehmet said. “If he gets in trouble or needs repair, I can help him out.”

At least initially, the availability of that support has been the greatest comfort to Cathy Turcich, Tom’s mother. After the crowd watched her son push the cart out the front door of their home and up the street, she sat in her kitchen and fixed a cup of tea.

“As a mother, it’s hard for me to absorb all of this,” Cathy Turcich said. “I’m so wrapped up in it emotionally.

“We’re proud of him at this point,” she said; “it’s taken me some time to adjust for sure.”

As the date of her son’s departure drew nearer, Cathy Turcich said she was feeling the weight of that moment. What strengthened her in the interim was a local fundraiser to see her son off. Catered by Severino Pasta and hosted at The Factory, the party showed just how many people in the area will be walking with Tom in spirit.

“That was huge,” she said. “It meant so much to all of us. I’ve gotten a lot of strength from that.

Turcich’s initial path will take him up to Conshohocken, PA, out west to the Susquehanna River, and then down towards Washington, D.C., where he expects to arrive in about a month. Follow his adventures at TheWorldWalk.com.