Kim Oberg will move her indoor cycling studio down Haddon Ave. and into a building that will also house Yogawood, Christine Patton’s juice bar, and Krista Sassani’s massage practice. 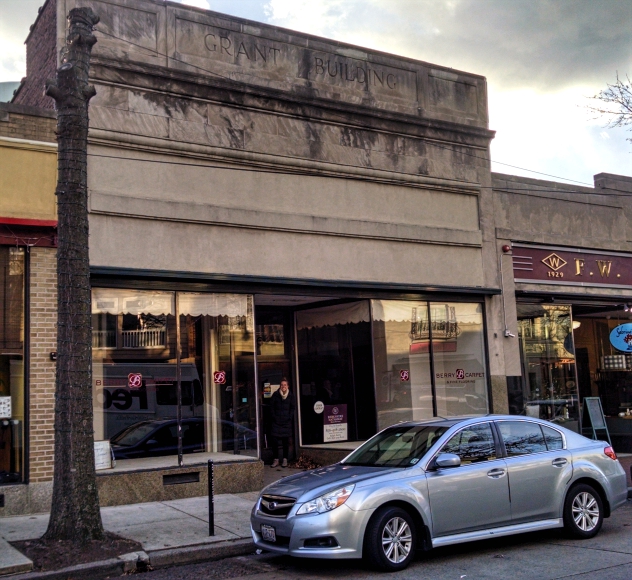 About a week after Election Day, Upcycle owner Kim Oberg got a message from Beth Filla of Yogawood saying she had a business idea she wanted to run by her.

Oberg had spent the previous several months working out a deal for Grant building in Collingswood in preparation to relocate her indoor cycling business there.

Her mind still buried in the details of those arrangements, Oberg said she was stunned when Filla asked if she might be interested in buying Yogawood from her.

The notion was “not even on my radar,” Oberg said.

“I said, ‘You know I just bought a building, right?’

Even though the offer seemingly came out of left field, the two businesses have shared a synchronicity since Oberg, who used to take classes at Yogawood, opened Upcycle in its former location at 688 Haddon Avenue. Those parallels will only deepen as she consolidates the businesses in their new home at 716 Haddon Avenue, which most recently housed the former Berry Tile and Carpet.

“For the past few months, I’d been focused on expanding Upcycle,” Oberg said. “We were going to offer the same classes we do, spin and yoga, and add barre, and then Beth approached me. [I said], ‘Let me see if I can make this work and still be able to do everything we wanted to do in that space, but also incorporate the entire Yogawood studio schedule.”

Oberg’s partners in the new venture include Christine Patton, who will bring her fresh-pressed business, Juice Girl, to a café in the front of the new location, and connective tissue therapist Krista Sassani, who will operate out of a second-floor massage space. There will be dedicated studios for yoga and indoor cycling, a small locker room with showers, and managerial offices in the 5,000-square-foot space.

“It’s going to be a one-stop shop for health and wellness,” Oberg said. 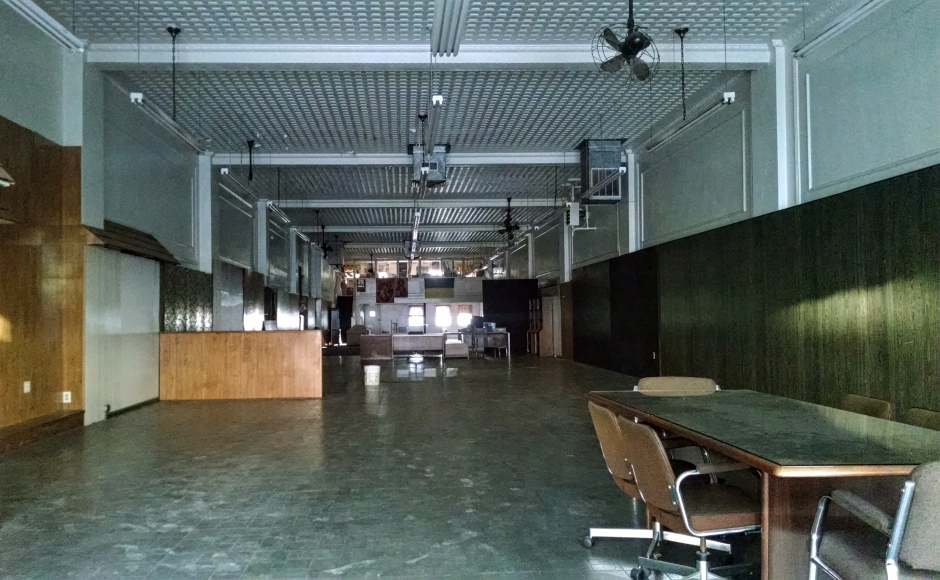 By combining their enterprises under one roof, the move makes it financially feasible to renovate a retail space the size of a downtown department store.

“As well as Upcycle’s done since we’ve opened, there’s no way I would have been able to do this without the support that I’ve had and the other businesses that are going to be in there,” Oberg said.

“The roof needs to be re-done,” she said. “The electric needs to be ripped out and replaced. I have serious investors who are willing to do this and be a part of it. If it were just me, I wouldn’t be able to do it.”

All three businesses will retain their independent brands, which Oberg said is critical to retaining their value. Patrons of each will find their experiences undiluted, the women said; moreover, the way their brands complement one another should deepen the followings that have risen up around them. In a town where Oberg estimates that 70 percent of her patrons live within a short ride of her business, embracing the community is critical to her enterprise.

“Living in Collingswood and running a business in Collingswood, it’s a really amazing town,” Oberg said. “When I’m upstairs and I can hear the hustle and bustle before classes, and people who didn’t know each other six months ago chatting about how their kids are doing, the community is amazing.”

Filla, too, spoke about Oberg’s understanding of the community as being central to her decision to hand over a business that just celebrated its tenth year in November. In that time, Filla said Yogawood had cultivated “a mature community of teachers” whose cohesive philosophy of yoga and its associated principles formed supports sturdy enough to outlive her ownership of the brand. “That’s something that took a long time to build and establish and now it can live on for sure.

“And [Oberg’s] also getting [Yogawood Studio Director] Maiga Milbourne and [Studio Manager] Carole Koznicki, which is really important because they know how the organization functions.

“A lot of that is ready to continue without me.

“I love teaching, but my interest in running an increasingly complex company is running low,” she said. “Kim has the energy and the drive for it. It gets to live on and that’s the most important thing.”

Filla is also excited by the opportunities for Yogawood to synchronize with the other businesses in its new building. Sassani has taught weekly bellydance fusion classes at Yogawood for months, which will continue in the new space, and Patton was contemplating adding her juice bar to Yogawood’s operations a few years ago when the business was considering its first move.

“All the overlaps that happen in a small town kill me,” Filla said. “To be in a physical space that encourages being near one another is fantastic, and to have it around something that’s physically helpful, that’s smart. I think it’s going to be such a cool intersection of things. You might see that crossover happen in a really big way.”

Sassani said that crossover is innate to her business; in addition to teaching dance classes at Yogawood, she’s also a certified Spin instructor who leads weekly classes at Upcycle. By bringing her massage practice to the new location, she expects that intersection will broaden.

“My work is based on the fact that everything is connected,” she said. “My practice focuses on the fascia system, the connective tissue of the body, and how one thing affects everything. The move to the Grant building is a brilliant example. 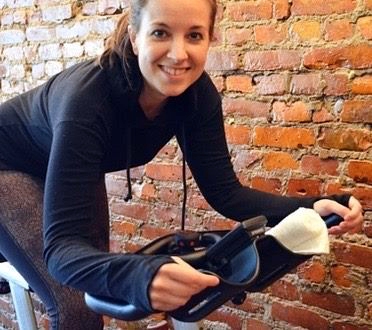 “I believe in Christine’s products, I believe in Kim and her mission with Upcycle, and I am so excited to be moving my practice and classes to the new facility that will house all our work,” she said.

“The B3 dance class has become a community of women that is so strong and so open to movement, and I am so grateful for our group and how it has been able to flourish at Yogawood.

“There is so much possibility for support and comprehensive healing and straight-up fun in this space with these people in a town that fosters small business and wellness and dreams,” Sassani said.

“I’ve been seeking this kind of collaboration in my career, and I feel certain about the powerful and positive work we’ll be able to do together in 2017.”

Patton, who splits time in Marlton and Stone Harbor throughout the year, said she’s had lots of offers to expand her business from farmers markets and Whole Foods pop-ups to a permanent physical space. None of the offers seemed right, she said, until Sassani and Oberg approached her about the Haddon Avenue storefront.

“It was a situation I just can’t say no to,” she said. “I believe in what Kimberly does in her business, what Krista does in her business, and what I do in my business. I waited five years to have a legitimate year-round home. If I didn’t give it a shot with these women, I would regret it.

“We all add something to the dynamic of making people feel better,” Patton said. “I knew the opportunity was meant for me.” 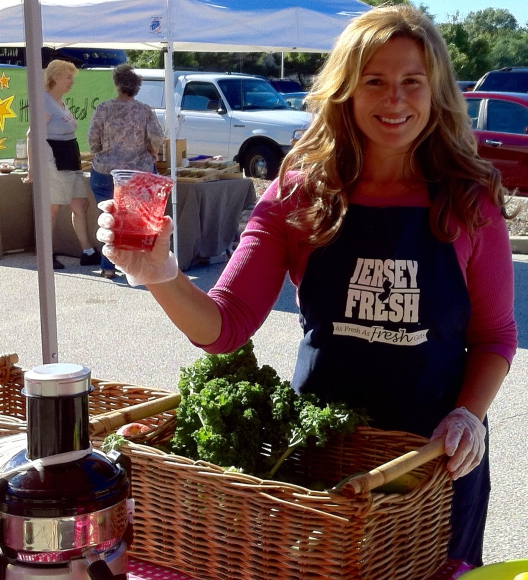 Juice Girl provides freshly made, signature juices that are hand-pressed in small batches.

In addition to maintaining a juice bar in the new building, Patton also offers multi-day juice cleanses that are tailored to her customers’ specific health needs.

She said the setup of the café will enable her to connect more closely with the people who patronize her business, and she’s excited at the prospect of slipping out the back door on a Saturday morning to grab farm-fresh produce from the Collingswood Farmers Market in season.

“I do my best to buy from local farms when I can,” Patton said.

“We’re not in the region where the climate supports that year-round, [but]most of the stuff that I do is hand-picked that morning and juiced as soon as we can to keep the enzymes intact. People want really good quality, and that’s what I want to deliver.

“Collingswood has always been serious about being a green town and sustainability,” she said. “We’re going to be the town that everybody wants to be. I don’t want to be in a big corporate shopping district or shopping mall. I think it’s smart to go into business with other smart businesspeople in a town that I think is going to be at the forefront of this.”

Until construction of the new space is completed, which Oberg estimates will take until the spring or summer of 2017, Yogawood and Upcycle classes will continue at their respective locations. Sassani, who operates out of Rachel Weiss’ Healing Space on the White Horse Pike, will continue to see clients there, and Patton will keep delivering her juices to pop-up locations throughout the region or individual customers in the meantime.

“Right now you can pretty much get most things that you’re looking for in downtown Collingswood, and with McFarlan’s coming in, all of these things are popping up, and you don’t have to get in your car to go anywhere,” Oberg said. “It’s really amazing for the people who live in town.”