Trending
You are at:Home»Police & Fire»UPDATE: Pennsauken Schoolteacher Charged with DUI, Assault by Auto in Pizzeria Crash

Pennsauken Intermediate schoolteacher Kimberly Killion has been formally charged in an auto accident at the Flying Crust Pizzeria, in which she and three other people were injured. 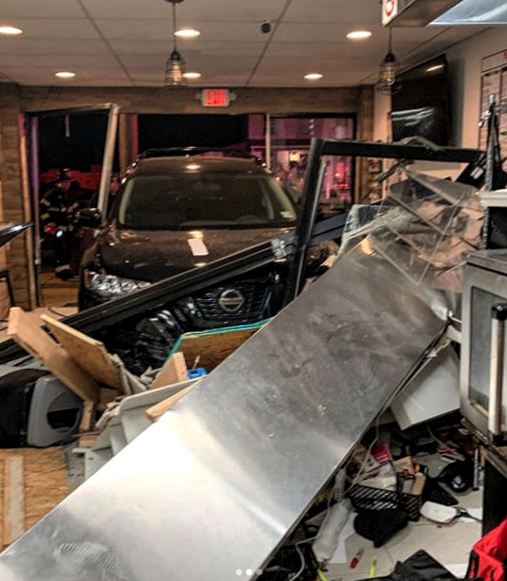 The Camden County Prosecutor’s Office (CCPO) has criminally charged Pennsauken schoolteacher Kimberly Killion with three counts of assault by auto in a May 3 crash that injured four people.

The CCPO alleges that Killion’s blood-alcohol content was over the legal limit when she left a Pennsauken watering hole around 10:15 that night and got behind the wheel of her Nissan SUV.

Killion then allegedly crashed through the front of the Flying Crust Pizza & Wings in the 7700 block of Park Avenue, injuring three people within and herself.

Killion’s blood alcohol content was later determined by a blood sample at a nearby hospital, to which she was taken after the crash. Another of the victims was treated at an area hospital and released the same day.

An earlier investigation by NJ Pen identified Killion’s vehicle as having been involved in the crash, but the CCPO would not confirm her as its driver at the time of the accident. Today, the agency said that its investigation into the case is ongoing.

Killion, whose father Jack Killion, is the township mayor, faces a future court date. The township had no official comment on the incident, citing the ongoing nature of the investigation.

A vehicle involved in a devastating crash that shuttered a Pennsauken pizzeria and injured four people last Friday has been identified as belonging to a schoolteacher in the township.

An independent investigation confirmed that 34-year-old Kimberly Killion of Pennsauken is the lessee of the black Nissan SUV that drove into Flying Crust Pizza & Wings in the 7700 block of Park Avenue around 10 p.m. May 3.

Killion has not yet been identified by police as the driver of the vehicle in the crash, however.

Both Pennsauken residents were transported to a nearby hospital for treatment after the crash, and the case was taken over by the prosecutor’s office. CCPO spokesperson Alexandra McVeigh declined to comment as to why the case had been transferred to her agency.

One reason could be to avoid potential conflicts of interest: Killion’s father, Jack Killion, is the mayor of the township and director of operations for the Pennsauken Board of Education. Her brother, Michael, is an officer in the township police department.

“The investigation into the incident at the Flying Crust in Pennsauken is ongoing and the Camden County Prosecutor’s Office is currently awaiting lab results. At this time, no charges have been filed, and no additional information is being released.”

An Open Public Records Act (OPRA) request has been filed with the Pennsauken Township clerk seeking a copy of the police report of the crash. No response had been received at press time.

Flying Crust Pizzeria declined repeated requests for comment about the incident, but has posted photos and videos of the impact of the crash on its Instagram account.

One video appears to show a woman in a Pennsauken school uniform being interviewed by police as if she had been operating the vehicle during the crash.