Trending
You are at:Home»Arts»Visiting Artist Shows Oaklyn School the Lasting Power of a Smile

When artist Bren Bataclan spent a week in the Oaklyn Public School, he left behind a student-created mural, but took with him a lasting connection to a grateful community. 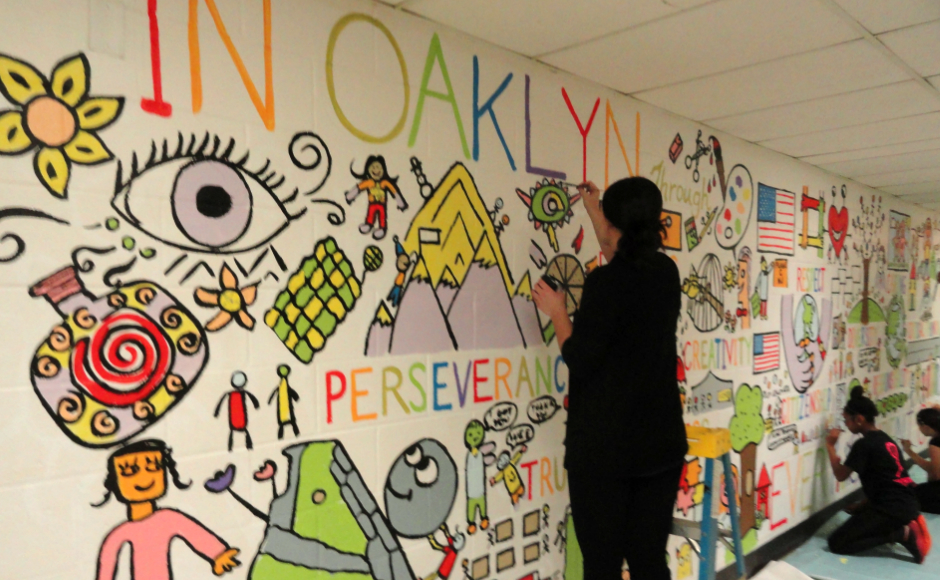 This story is yours to keep as long as you promise to smile at random people more often.

Of course, news is no one’s to “keep,” and making people smile isn’t really the point of journalism.

But a version of that message has been delivered to people in 70 countries by Boston-based artist Bren Bataclan, and last week, he brought it to children in the Oaklyn Public School.

With broad lines, simple shapes, and bright colors, Bataclan’s cheerful paintings are eye-catching. He leaves them in public places where they are easily found. On the reverse of each is some variation of a simple message asking the finder to perform a small kindness in exchange for the work.

The quid pro quo that Bataclan’s illustrations offer is meant to motivate change on an interpersonal level. With the rise of anti-bullying curricula in school districts, he’s found that it’s also opening doors for larger conversations in a group setting by modeling small gestures of kindness. Bataclan calls it “The Smile Movement.” 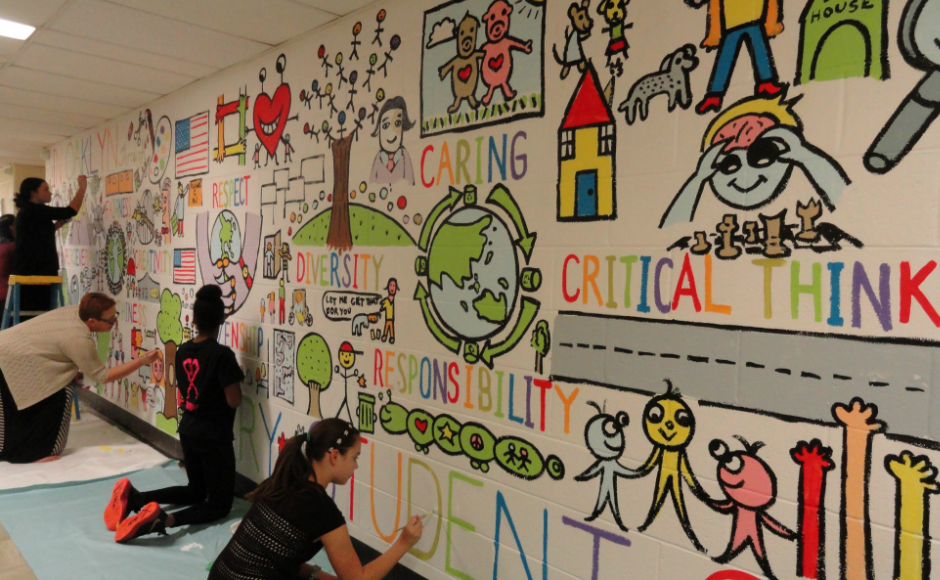 “It’s not hard to mimic my characters, and it’s really easy to create your own,” Bataclan said.

“It’s that visceral way of drawing,” he said. “I think what the kids get out of it is a lot of empowerment.”

When the stories of his travels and the disbursement of his artwork reached Oaklyn School teacher Lori Davenport, it particularly affected one of her students, Krystal Abanil. Like Bataclan, Abanil is of Filipino descent; she does not, however, share his outgoing personality. So when Davenport saw that Bataclan’s work sparked her interest, she reached out to see whether he might send Abanil a note to inspire her further.

“I reached out to him and explained the story, and said, ‘If you could just e-mail us back, she would be thrilled,’” Davenport said.

Bataclan was so moved by her request that he upped the ante, replying, “Maybe I can visit.” 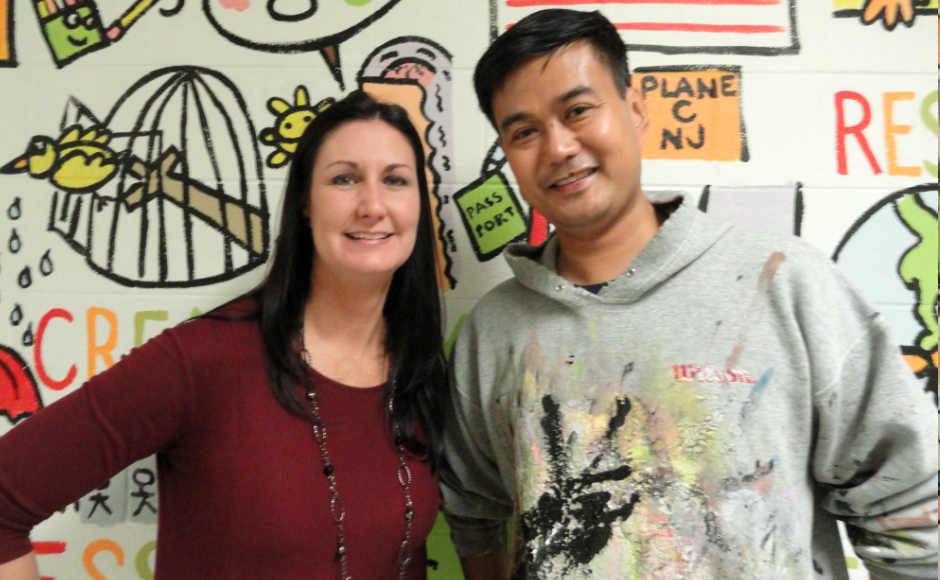 The rest was up to Davenport. She pitched the idea to Oaklyn School Principal Jennifer Boulden and the borough PTA, and things moved very quickly after that.

“When we ask for something, this PTA just takes it and runs with it,” Boulden said.

“I’ve never seen such a giving group of people. They want to do whatever is in the best interests of the students here,” she said.

Last week, Bataclan briefly became the Oaklyn School artist-in-residence, hosting three school-wide student assemblies and an intensive workshop with students in grades four through nine. He then drew upon students’ works of art to create a mural in the hallway outside of the school library. It incorporates elements of the Oaklyn School character education program and core purpose, as well.

“All the words that align with our character ed and core purpose are on the wall—caring, citizenship, trustworthiness, responsibility, respect, and fairness,” Boulden said; as well as “the words that are part of the core purpose of our school: perseverance, creativity, diversity, critical thinking.” 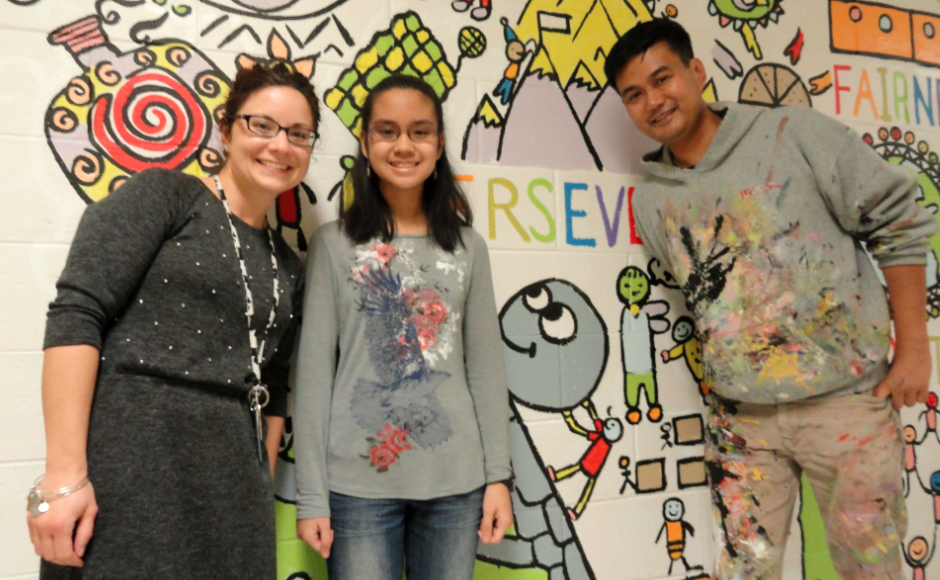 Although Bataclan’s visit was inspired by Abanil’s story, “she is not the only kid that he’s brought out the best in,” the principal said.

The mural in the Oaklyn School is one of 120 Bataclan has painted in a career that has shifted from college art professor to full-time artist.

His process, which emphasizes that it’s impossible to make mistakes in the act of drawing, was embraced fully by staff and students alike.

By aligning the message of the Smile Movement with the core values and character education lessons of the district, Bataclan said he was pleased to leave behind a work of art that he believes will be “one of the highlights of my career.

“Everyone here has been so kind,” he said. “I feel so welcome, loved; and the students are really talented.” 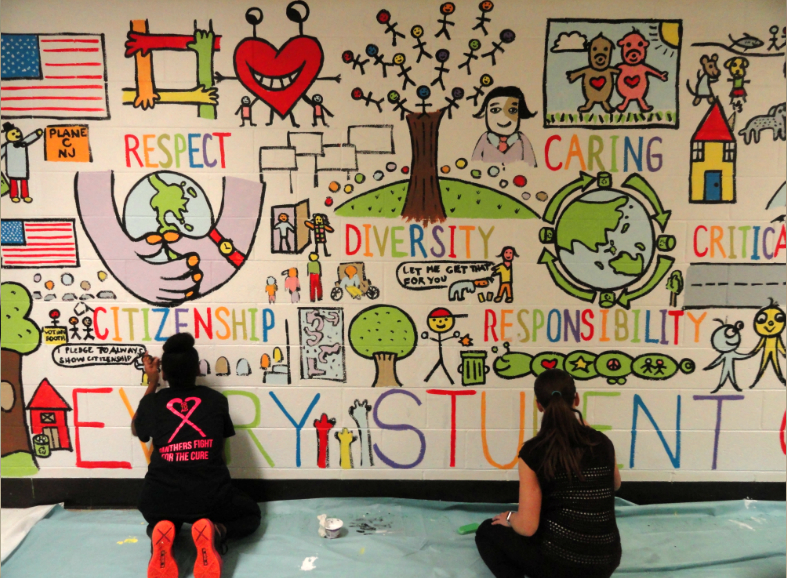 Davenport said that Bataclan’s visit “has been like the ultimate teaching experience.

“I serve a very small group of students, and to be able to make that connection a reality and a learning experience, and have the backing of the PTA and my principal has been a great experience,” she said.

Best of all, Davenport said, the process has been an opportunity to show Abanil, the student whose interest sparked Bataclan’s visit, how powerful the results of her bravery could be.

In the middle of one of the student assemblies, Abanil was even poised enough to answer a couple questions from Bataclan on the microphone.

“We thought it was going to be overwhelming for her, but it’s quite the opposite,” Davenport said. “She showed interest in this, and look what’s happened.”

If that story won’t make you smile, the mural that Bataclan has left behind certainly will. That smile is yours to keep—as long as you promise to pass it along.