First responders from six South Jersey counties gathered at St. Agnes Roman Catholic Church in Blackwood for a celebration of their sacrifices and a blessing of their works. In the Catholic Church, September 29 is the feast day of the archangels Michael, Gabriel, and Raphael, Biblical servants who carry out God’s work by fighting evil, delivering messages, and healing the sick.

The trio provided fitting—if not literally divine—inspiration for remarks delivered by Camden Bishop Dennis Sullivan at the 14th annual “Blue Mass” on Tuesday, the religious service honoring the sacrifices of emergency first responders within the Camden diocese.

After a stirring, multi-departmental processional featuring an honor guard presentation and bagpipes-and-drums fanfare, Sullivan’s remarks filled the hall of the St. Agnes Roman Catholic Church in Blackwood, invoking divine assistance for those who put themselves in harm’s way in service to the public.

Like the archangels, Sullivan said, first responders are “guardians, not warriors,” who are called upon to “maintain order, keep the law, and bring peace. 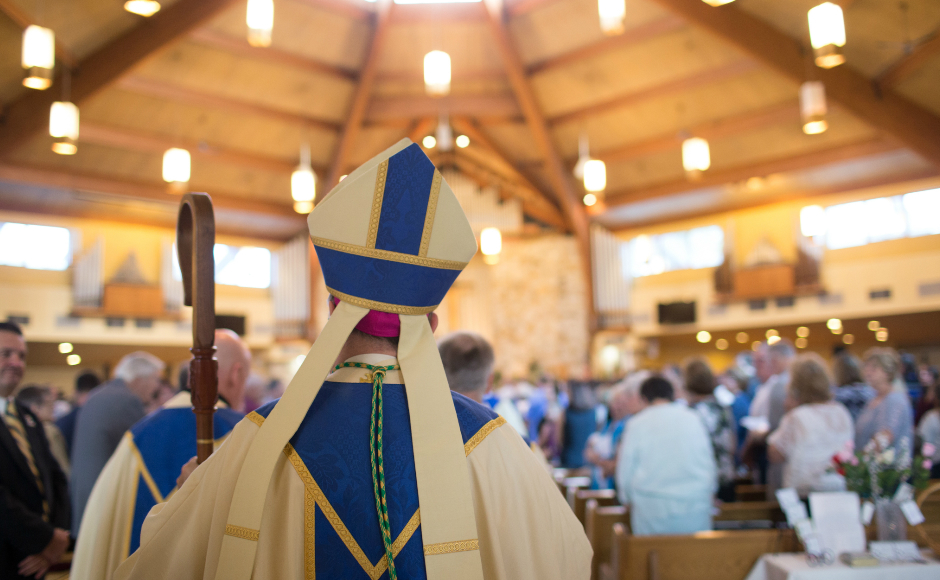 “The work you do is carried on the wings of angels,” the bishop said. “You restore peace where peace has been broken; you protect our communities, you defend us.

As much as Sullivan’s rhetoric about the conflict between good and evil was meant to inspire and comfort the men and women who are called to intercede in dangerous situations, the responsibility of a contemporary police department is to maintain a good relationship with its citizens, not necessarily to view them as agents of a supernatural darkness.

To that end, the bishop also praised the efforts of Camden County Police Chief J. Scott Thomson, whose community policing approach was singled out for special praise by President Barack Obama in his visit to the beleaguered city of Camden this year, where “praise be to God, it’s working,” Sullivan said. 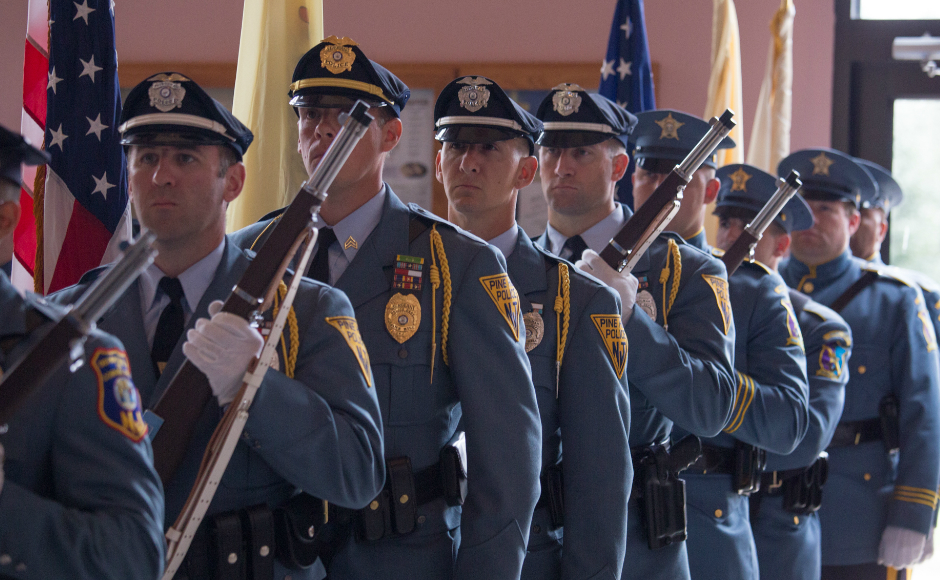 Gloucester Township Police Chief Harry Earle, whose department has been at the forefront of community policing efforts in South Jersey for the past five years, said the strategy was begun as a remedy to deteriorating relationships between law enforcement and private citizens nationwide.

“We started because we saw that was a better way to address crime,” Earle said. “It’s about understanding one another.”

Earle described the service as “a great event that brings law enforcement and the community together,” and praised the Blue Mass Committee members for their organizational efforts. 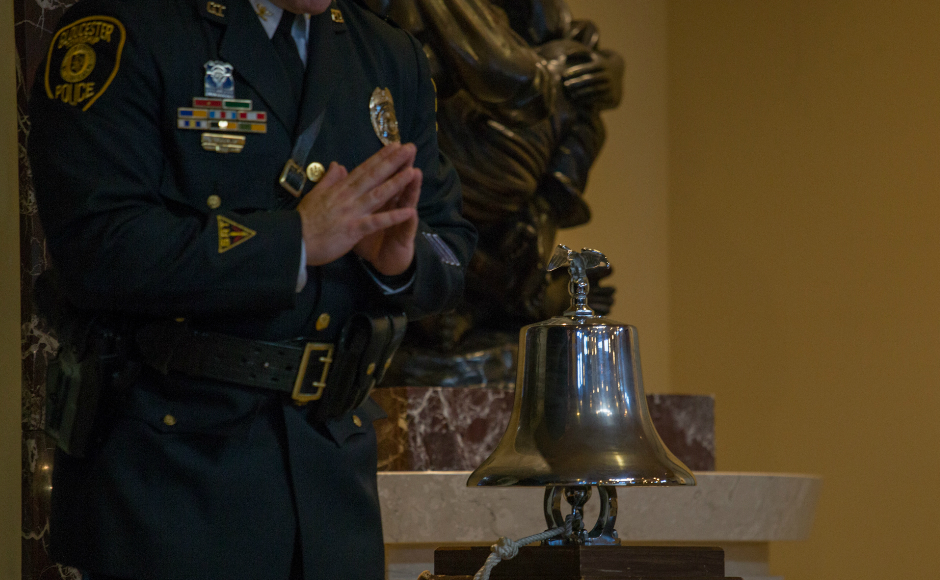 A bell sounded for each fallen responder. Credit: Tricia Burrough.

Gloucester Township Mayor David Mayer called the mass an opportunity “to come together as a community of faith, to offer our best wishes to those who serve us in public safety, and to acknowledge their service in keeping our families safe and secure.

“Every day I think of our police officers, our firefighters, our emergency medical personnel,” Mayer said. “I see their good works every day.”

“It’s a blessing,” said Cherry Hill Police Lieutenant William Kushina. “It gives you a chance to recharge your batteries and go on.”

During the service, Kushina said that his thoughts were with Martin Peary, late of Northfield. Peary, an Acting Sergeant in the Northfield Police Department, died of a heart attack at age 50 in July. He was well-known among his peers for participating in other memorial services as a member of the Northfield motorcycle police unit, the Atlantic City Press noted. 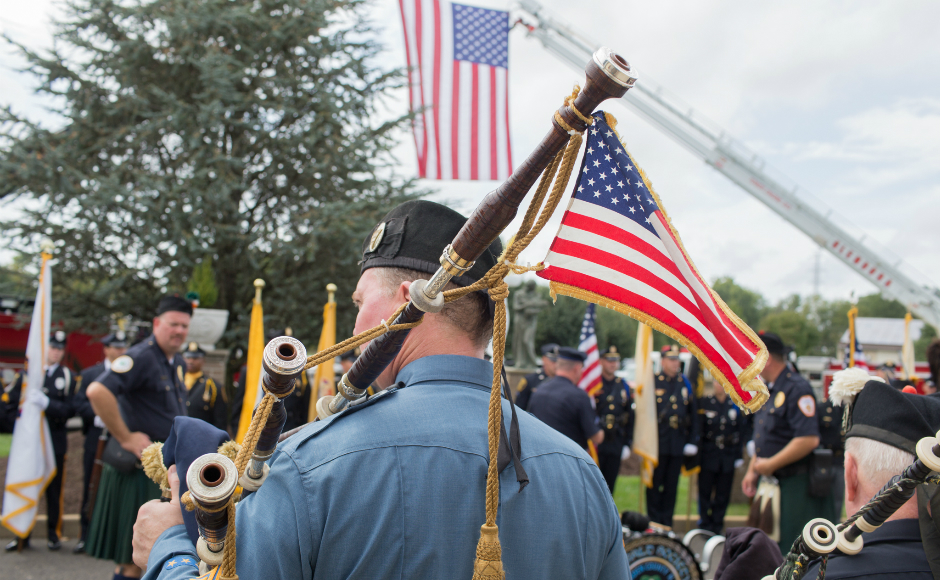 “He was really good friend of mine,” Kushina said, adding that the Blue Mass, “makes you think; makes you reflect upon” fallen friends.

Collingswood Police Officer Kristina Bowen, who participated in the mass as a celebrant, said that she was honored to play a role in the ceremony. The daughter of an EMT, and brother and granddaughter of military servicepeople, Bowen said Sullivan’s valediction resonated with her.

The bishop shared a common prayer from his childhood in Brooklyn, where sirens were commonplace. At the sound of an ambulance, or a police car, or a fire engine, he was instructed to pray, “God protect them” for the people “rushing to some situation where they’re not sure what they’re going to face.” 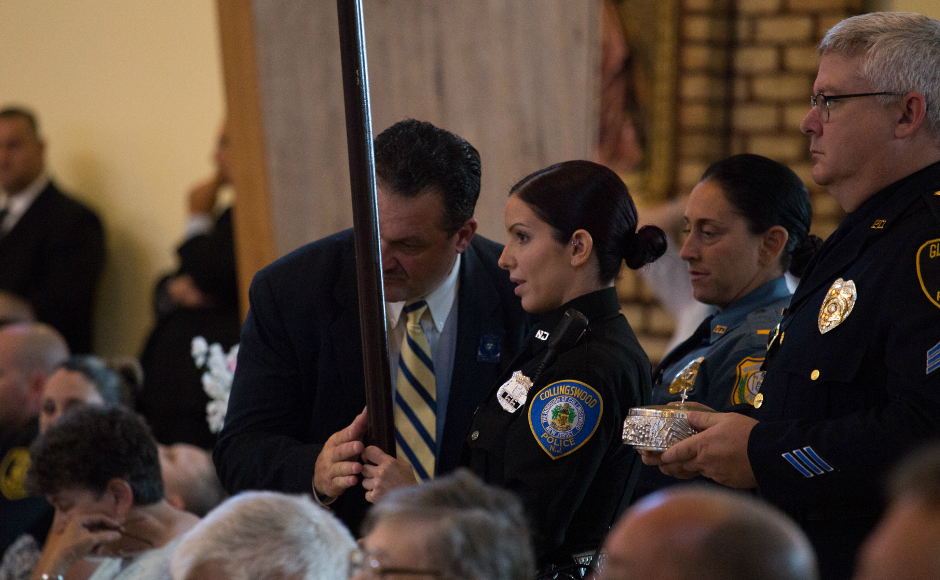 “You never know the type of situation you’re going into,” Bowen said. “You have to be prepared for everything.”

Beyond the message of preparation, the bishop also offered words of thanks to the assembled public servants.

“Too often, you are confronted with the darker side of life in the situations in which you must confront the darkness,” Sullivan said. “Too infrequently do you hear words of gratitude.

“Hear them now on behalf of the six counties of our diocese,” he said: “I thank you for being on the front line of life.”