South Jersey law enforcement officials talk about how the situation might have been handled differently, and why community relationships are so important for police. 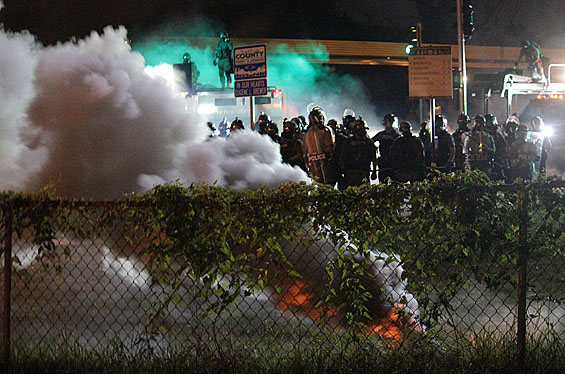 As reports from the riots in Ferguson, MO came in, people throughout the country struggled to make sense of the news.

Elected officials assembling among the protestors were tear-gassed along with them or arrested after documenting the scene.

Tactical units, unnerved by two days of looting and violence, dispersed crowds of demonstrators with smoke bombs and rubber bullets Wednesday night, sending them scrambling into the surrounding neighborhoods.

From miles away, touched not only by the suddenness with which the violence erupted in the streets of Ferguson, but the seemingly disproportionate nature of the response, those following the story could only really wonder: Could this happen here?

Street riots and looting are obviously uncommon occurrences anywhere in America, but seemed especially out of place in Ferguson to Washington Post writer Todd C. Frankel.

He noted that it “has long been part of the city’s lore” that St. Louis—the metro area with which most Ferguson residents identify—“doesn’t riot.”

“What happened in Ferguson was a regional reaction” to the shooting death of 18-year-old Michael Brown, tinged with racial overtones that hadn’t even bubbled up during the Civil Rights era, Frankel wrote Tuesday.

The crowds gathered there, “both peaceful protestors and those looking for trouble,” hailed from throughout the nearby suburbs, he wrote, drawn by what they perceived as “a national problem.” 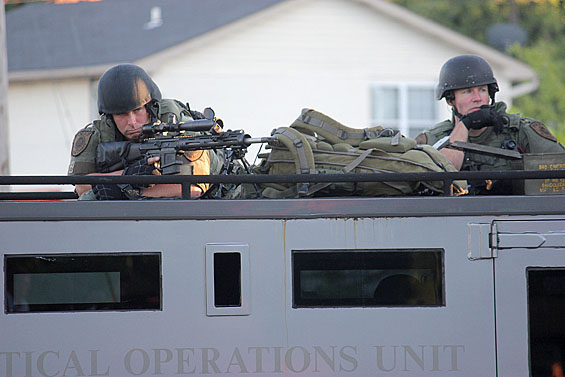 Greg Howard’s essay on Deadspin.com, boldly titled, “America is Not for Black People,” sums up the balance of power like this:

“Ferguson is a small town of 21,000, mostly white until the 1960s, when whites fled anywhere but where they were. Today, Ferguson, which is a bit north of St. Louis, is mostly black; Ferguson and St. Louis County police are mostly white. That fits a metropolitan area flanked by two rivers that divide neighborhoods and regions by race, the sixth-most segregated in the United States.”

“There are reasons why white gun’s rights activists can walk into a Chipotle restaurant with assault rifles and be seen as gauche nuisances,” Howard wrote, “while unarmed black men are killed for reaching for their wallets or cell phones, or carrying children’s toys.”

‘You’ve got to reach out to the community’

Even ignoring such a political climate, said Collingswood Police Chief Richard Sarlo, when there’s a fatal shooting by a police officer, the first thing to do is open a public dialogue and acknowledge the grief involved. Without effective and sincere outreach, he said, lasting damage can be done just from the fallout after an incident like the Brown shooting. 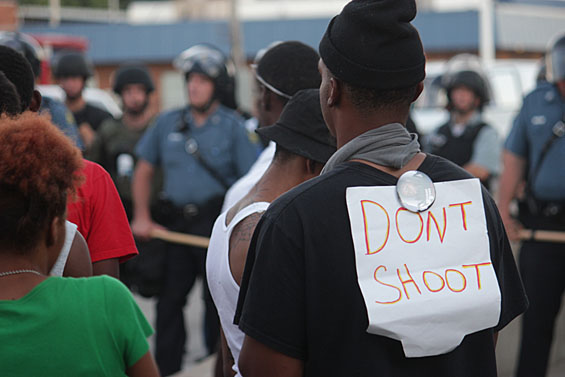 “It takes one bad guy and the next thing you know, the whole place is bad,” Sarlo said. “You’ve got to reach out to the community.”

Law enforcement officials in such a situation should be in close contact with local leaders from the outset, Sarlo said, at least to emphasize that such incidents can be resolved by due process.

“It comes down to trying to get everybody on board, explaining the process, and not taking sides,” he said. “Get it done, get the process through, and make sure that it’s done properly, and whatever the result is, the result is.”

Years ago, Sarlo recalled, Collingswood residents were stunned by a drive-by shooting in the area of Franklin and Haddon Avenues. Police hosted an information session in the borough community center to present the details of the case, to reassure residents that “drive-by shootings don’t happen in Collingswood,” and to remind them that their police can keep them safe.

“The citizens of Collingswood have always embraced the police department of Collingswood,” Sarlo said. “They know we’re there not for anything but their protection.” 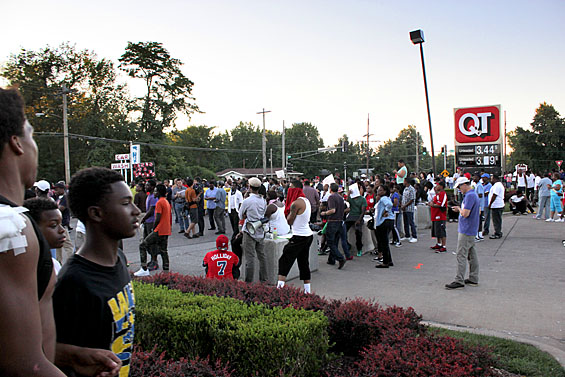 ‘Everybody knows that you’re being recorded out there’

Haddon Heights Councilman Rick DiRenzo, who served on the Camden City Police force for 26 years, agreed with Sarlo that Ferguson leaders fumbled the handling of Brown’s shooting from the beginning.

“I don’t know why it got this bad,” DiRenzo said. “I never saw anything escalate that quickly.”

DiRenzo recalled clearing crowded corners and crime scenes in Camden City after a shooting or other incident, and he said that police frequently supervised protests without physical intervention.

“If nobody’s doing anything to you, you’ve got to stand back, let them do their thing, and move on,” he said.

“I’ve gone out and dispersed the corners in Camden, and they’re walking away and throwing stuff at you, but I’m not going to make the confrontation worse.”

DiRenzo believes that, in addition to reaching out to Brown’s family and other local leaders from the get-go, the case should have been turned over to a county prosecutor or other regional law enforcement immediately, with a media briefing on the incident.

Instead, “there was a complete communication breakdown” that led to “the press feeding off of the racial element,” DiRenzo said.

Either as a byproduct of such coverage or the collateral damage of an overreaching police force, the story then became about how journalists were arrested or tear-gassed trying to report it.

“I don’ t understand that,” DiRenzo said. “First of all, I want the newspaper people on my side. People talk to reporters before they’ll talk to police investigators. It’s going to take a long time for the investigators to gain the respect and the trust of th [to Brown’s death].”

What could have helped the situation, DiRenzo said, is not less coverage, but more. He suggested that officer-mounted body cameras “would record a lot more stuff,” instead of distilling the encounter into a witness’s word against that of the police.

Besides, he said, from cell phones to security cameras, “Everybody knows that you’re being recorded out there.

“A good cop doesn’t want to have to use his gun,” he said. 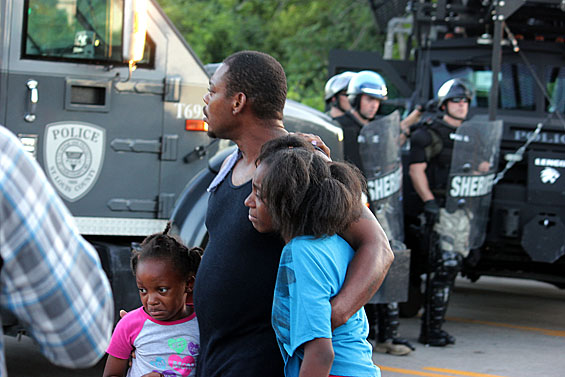 ‘You need their understanding’

Oaklyn Police Chief Mark Moore said that in order to police a community, what law enforcement needs most is the support of its residents.

He said that the strength of the community is what enables police to do their jobs with compassion.

“We’re less than one square mile,” Moore said. “We know just about every one of the 4,000 residents.”

Moore described how in addition to joining in with larger events like National Night Out, Oaklyn police support community celebrations from the town picnic to holiday parades.

Det. Jayne Jones is known to pet owners in town for her ready supply of dog treats. Officers tour the school building regularly to be a visible presence to children, and hopefully build positive relationships.

“We keep trying to do it daily,” Moore said. “You need [residents’] support and understanding to make the job easier.”

The closest the chief could recall being to any crowd-control situation like the Ferguson riots happened a few years ago during a party at the town fire hall. In that instance, a group of partygoers numbering in the hundreds was drinking publicly and refusing commands to move on.

The tactical response that evening was not tear gas and riot gear. It was a K-9 dispatch.

“Within five minutes, they moved out,” Moore said. “You can’t talk to a dog like you can a police officer.”

Moore said he believes that civilian-police encounters like those that touched off the riots in Ferguson would be unlikely to occur in Oaklyn “because of the much smaller, stronger community” as well as measured responses like these.

‘We all want answers’

On Thursday, it seemed, someone finally got the message.

Johnson, a native of the region, ordered his men to remove their tactical gear and gas masks. He joined protesters at the burned-out shell of the looted QuikTrip convenience store that had become the centerpiece of the conflict between police and residents.

He walked the line with them, hugged them, and prayed with them, reported Wesley Lowery of the Washington Post–and he took questions from reporters, too.

Photos courtesy of Danny Wicentowski and the Riverfront Times.