One of the most economically vital neighborhoods in Camden City gets a once-in-a-lifetime upgrade that could transform quality of life in the community while making critical infrastructure improvements. 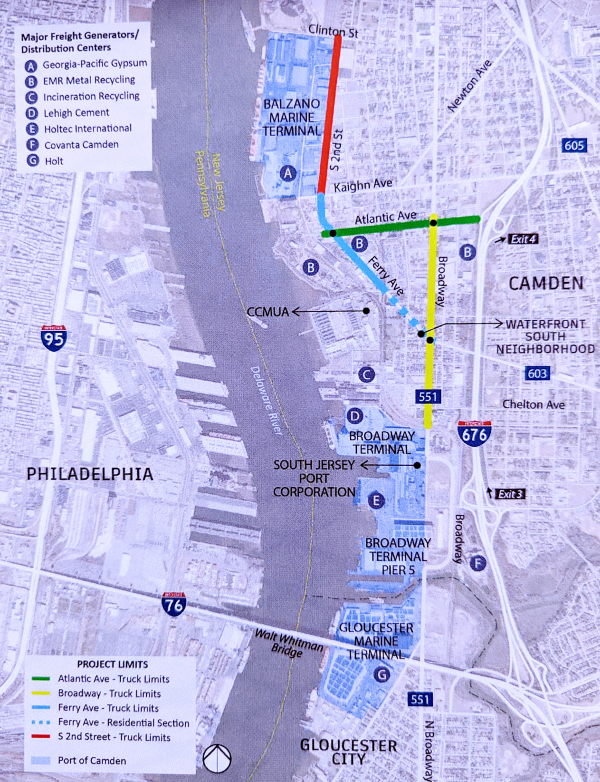 On Monday afternoon, officials from state, local, and federal governments convened at the Joseph A. Balzano marine terminal of the South Jersey Port Corporation to announce a once-in-a-generation project expected to make significant improvements to the Waterfront South neighborhood of Camden City.

The $36.5-million “Port of Camden Access and Infrastructure Resiliency Project” represents not only a historic feat of engineering for the city, officials said, but one of grant writing, planning, and collaboration across years and various agencies.

The project will divert heavy truck traffic away from residential neighborhoods and directly to the port by reconstructing nearly three miles of local roadways.

It promises upgrades to local pedestrian, bus, and bicycle access to the area via lighting, signage, sidewalks, curb cuts, and pavement markings.

As Camden County Engineer Kevin Becica put it, “If we improve the port, it allows us to have residents walk to a good-paying job.”

Becica described the three-year ramping-up process of compiling more than $11 million in New Jersey Department of Transportation (NJDOT) grants for freight, port, and roadway improvement in order for local coffers to hit the 20-percent-of-cost threshold necessary to win an additional $25 million in federal infrastructure dollars.

The Waterfront South project is one of only eight such grants awarded nationwide.

“This is a big deal,” Becica said. “We started working when the first freight grants came out from DOT.”

Perhaps most significantly, the work also includes repairs that will separate the existing combined stormwater and sanitary sewer system in the area, which past its 70-year life expectancy by some three decades. Not only should those fixes halt sewage flooding in the area, but they also could divert some 17 million gallons of stormwater from the system annually.

Becica estimated that the work will be completed in phases throughout the next three years, with gas and sewer lines replaced first. Plans from the Tampa, Florida-headquartered engineering firm WSP are headed to the New Jersey Department of Environmental Protection within the next 10 to 12 months. 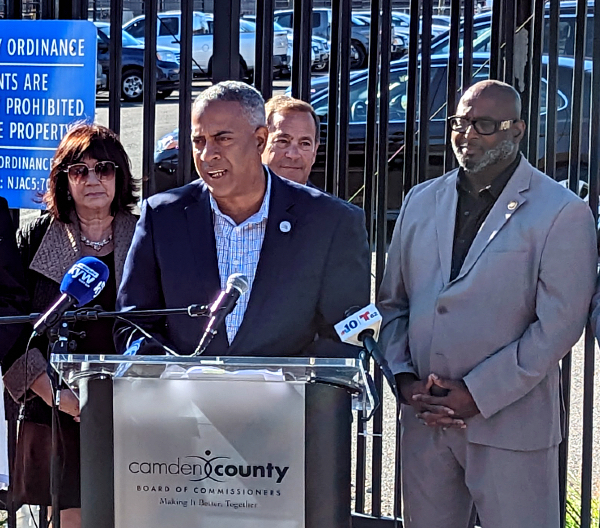 Camden City Mayor Vic Carstarphen described the project as “a critical investment,” and “essential to our port,” noting that it took “a collaborative effort” at various levels of government “just pushing for this.

The mayor, who said he grew up both in the Waterfront South and Cramer Hill neighborhoods, could recall the impact of heavy rainfall on the combined sewer and water system in the city.

As a child, “We used to catch it,” he said, playing blithely in illegal dumping grounds amid toxic overflow.

It’s been a priority for Carstarphen’s administration, as well as those preceding it, to address those toxic sites, converting hardscaped surfaces into public parks and open greenspace to relieve the burden of storm surges on local infrastructure.

Now the mayor said he’s taking a closer look at code enforcement issues in neighborhoods where the need for well-paying, accessible jobs is butting up against environmental concerns that have affected the quality of life for residents.

On October 18, when a fire of toxic “fluff” — the innards of stripped-out car seats, dashboards, and other vehicle components — raged through the EMR Recycling facility just a block away from where Monday’s announcement was held, Waterfront South neighbors were evacuated from their homes due to air quality for the second time in six months, and the third in little more than a year.

Cold weather conditions that day conspired to keep the smoke low to the ground, Camden City Fire Chief Michael Harper said. That meant the noxious fumes infiltrated homes in Waterfront South while also being carried aloft into communities in the city suburbs. City firefighters and hazardous materials teams battled the fire for about five hours before it was brought under control.

“The conditions were horrific, obviously,” Harper said. “We had our units running all over the place, chasing smoke, because it was getting in the neighborhood. We had several calls for service as a result of the smoke.”

EMR spokesperson Keenan Kendrick said that the fire was caused by a lithium-ion battery, which the facility is not equipped to process, and that such batteries “are often wrongly commingled with other end-of-life products for ease of disposal, due to the limited infrastructure available for the recycling of batteries.”

“We would like to apologize to the local community and businesses for any inconvenience,” Kendrick said. ”We take incidents like this very seriously, and are continuing to work with the recycling industry globally, our customers, partners and battery manufacturers to tackle this issue.”

However the battery came to be at the plant, its ignition of what Harper described as “a pile of fluff equivalent to a two-story building” certainly exacerbated the circumstances there. EMR workers using heavy machinery were able to help circulate the piles, allowing firefighters to keep the materials heavily saturated with water.

The fire chief noted that, even beyond the disruption to life in the neighborhood, the frequency with which first responders must address such toxic industrial concerns takes its toll on them as well.

“There’s certain addresses that guys hate to hear,” Harper said. “There’s certain inherent cancers that are more prevalent in firefighters than the general public. You get the exposure, and if you don’t wash your turnout gear, it can continue to off-gas later on. It’s a lot anymore.”

On Monday, Carstarphen said that EMR is in the process of putting together a plan to improve conditions at its facility.

“I feel real good about our code enforcement,” Carstarphen said. “I believe we’re staying on top of things. We care about what’s going on, and we’re trying to figure out ways to lessen what’s going on.” ‘The dialogue is there. We want transparency.’

For Carlos Morales, executive director of the Waterfront South community development nonprofit The Heart of Camden, both the port project and code enforcement efforts represent fixes that the neighborhood and its residents have desperately sought for decades.

Morales opened his remarks by describing how the impact of heavy truck traffic through the neighborhood once collapsed a school ceiling during his high-school years.

Although that incident dates back to the mid-1980s, conditions in the area have only deteriorated since.

“We brought EMR out to our neighborhood,” he said. “The dialogue is there. We want transparency.”

For Morales, the community dialogue that informed the project planning is the result of “a 10-year vision,” and “sends a message that the public sector wants to invest in the neighborhood.”

Waterfront South resident Jordan Mead said the project leaves him with both optimism and concerns.

Mead, a six-year resident of the neighborhood who commutes mostly by bicycle, said current conditions on the local roadways are largely impassible without a car, to which many of his neighbors don’t have access.

“The really unfortunate thing of Waterfront South is we’re cut off from so many angles: the river, 676, Newton Creek,” Mead said. “We have all these physical barriers that isolate us from the rest of the city.

“The trucking traffic is another barrier,” he said. “It’s really dangerous, and creates this really fast-paced road attitude that’s very intimidating to cross. Everybody goes faster than they should be, the trucks are insanely loud and big, the roads are in terrible shape.”

Nonetheless, Mead is optimistic that the project could unite his community against the same environmental challenges it’s intended to resolve.

“Anything that gets people out and about more brings the community together more,” he said. “That’s potentially a good way to have more of a collective voice as a neighborhood; to have leverage against those issues that are negatively impacting us,” he said.