Unfavorable weather conditions and a tremendous volume of waste material have contributed to an hours-long battle with a two-alarm fire at EMR of Camden City. At least 10 families have been evacuated. 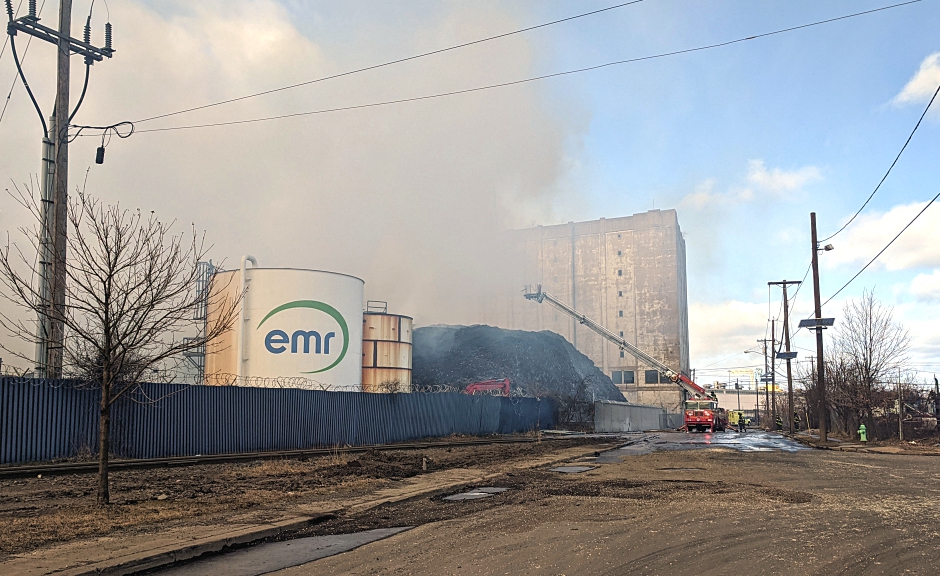 A fire at EMR in Camden City sent noxious plumes throughout the region. Credit: Matt Skoufalos.

Since 4:39 a.m. Friday, Camden City firefighters have been battling a two-alarm fire at a metal recycling plant on the Delaware waterfront.

Nearly 11 hours later, it’s still not under control, spurring reports of air quality issues from communities as far as nine miles away.

The origins of the incident are not yet known, but it began in a scrapyard belonging to EMR (Eastern Metal Recycling) at 1251 South Front Street in Camden City.

Although the origins of the fire remain under investigation, Harper said its chief fuel source is a combination of automotive shredder residue (ASR) known in the vehicle recycling industry as “auto fluff.”

According to Waste Advantage Magazine:

ASR consists of a wide variety of materials, including plastics, glass, rubber, wood, foam, tramp metal, wire, fibers, sand and dirt. It can also contain some hazardous contaminants such as lead, cadmium and petroleum hydrocarbons, prompting some countries to classify ASR as hazardous waste. Automobile recycling produces about five million tons of ASR every year, and nearly all of this residue ends up in landfills.

Harper described the volume of fluff on the scene as one of the primary obstacles to bringing the fire under control. The other is the unfavorable weather conditions, which include 28-degree temperatures with 22-miles-per-hour winds.

“With the piles being as big as they are, it’s hard to get water on the fire,” the chief said. “Winds are breaking up streams and the cold is holding the smoke close to the ground, affecting homes.

“Companies are doing the best they can to get this out, but [EMR] has to move the un-burnt product away from what’s burning, and there’s too much to move.” 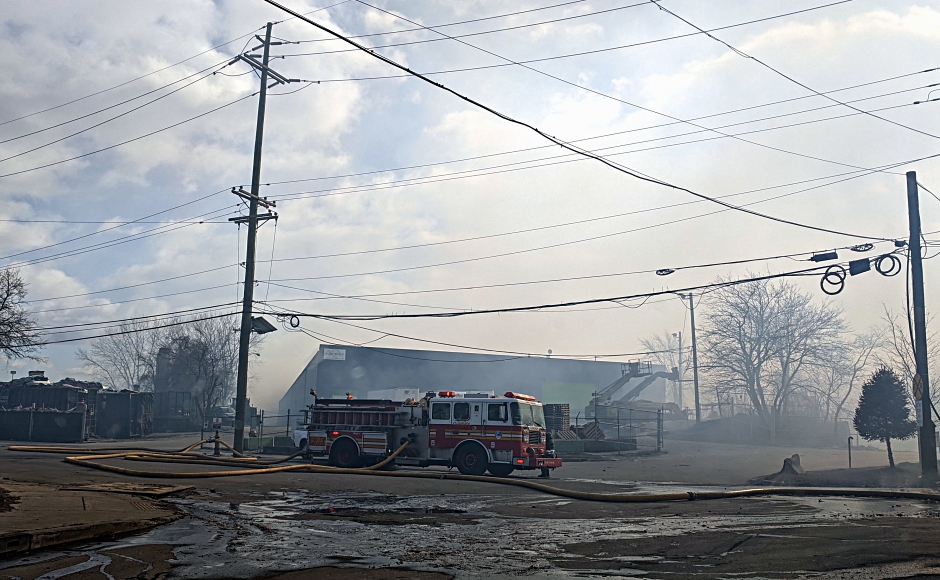 A fire at EMR in Camden City sent noxious plumes throughout the region. Credit: Matt Skoufalos.

The H.B. Wilson Family School and Creative Arts Morgan Village Academy have been designated as temporary areas of refuge for residents whose air quality has gotten too poor to endure, Harper said.

Officials from the New Jersey Department of Environmental Protection were also on-scene at the fire, and are monitoring air quality in the area.

Five firefighters also suffered smoke inhalation at the scene and had to be treated, Harper said.

In the warmer months, the auto fluff can sometimes self-ignite, the chief said, but that’s hardly the case in Friday’s incident. However, Harper said the Camden City Fire Department has been at EMR “four or five times in the past few months” for similar issues.

Camden City Mayor Frank Moran said his office is “activating everything” from HAZMAT units to the Camden County Office of Emergency Management in response to the fire, and that “all hands are on deck.”

The Heart of Camden, a nonprofit entity in the Waterfront South neighborhood operated through Sacred Heart Church, has been helping to relocate families whose living situations are affected by the fire.

As of Friday afternoon, Moran said his office will temporarily re-home 10 Camden City families at nearby hotels, but that a mandatory evacuation for the neighborhood has not yet been ordered.

Interior air quality sampling of homes in areas from Broadway to Morgan Village “didn’t really find anything at that high level to trigger that alarm,” but officials are monitoring it, the mayor said.

The mayor also acknowledged the frequency with which fires at the EMR site have occurred, and said more in-depth conversations will be held among the company, the city, and state agencies.

“It’s on the shoulders of EMR now,” he said. “It’s significant; we recognize it.”

In a statement to the media issued Friday afternoon, EMR claimed that the fire was “believed to have originated from a storage pile of recyclable metal.” The company claims that “no processing of scrap metal of any kind has occurred within the last 30 days at this location,” and further that “EMR does not ‘smelt’ scrap metal at any of its locations.

In the statement, the company said it is providing “food, clothing, and other resources to any impacted residents,” and “sincerely regrets any disruption to our neighbors in Camden concerning this incident.” EMR said it will monitor the air quality in the area “until the fire is completely extinguished.”

The Camden County Health Department, which is the lead agency on the environmental impact of the fire, reported that “relatively normal atmospheric conditions” were observed onsite at the EMR facility as well as throughout the surrounding neighborhood. The Camden County HAZMAT team remains onsite after having arrived there at 9:40 a.m. Friday.