Security footage along Eldridge Avenue seems to depict a handful of teens indiscriminately vandalizing homes, street signs, and vehicles in the borough. 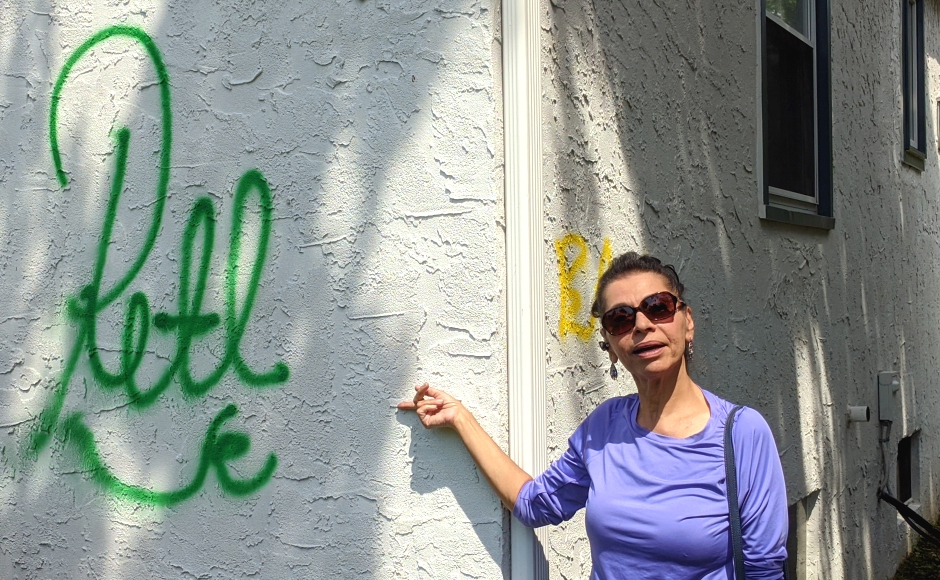 Several cars, a private residence, and assorted public property were vandalized overnight along Eldridge Avenue in Collingswood by what residents and police believe to have been a group of teens.

Graffiti that ranged in messaging from Black Lives Matter slogans to illegible and indiscriminate tagging was discovered by neighbors early Wednesday morning, as police were active across the river in Philadelphia after a fifth day of tensions.

Mahz Smith, a 46-year Collingswood resident, said she was alerted to the spray-paint on her home by her next-door neighbor, Kacey Price. She soon discovered that one of her window screens also had been cut, and her security system sign partially broken.

Smith struggled to understand why her home had been targeted, and what, if any message, she was meant to receive from it. The graffiti on her residence appeared to be the signature of its author, and not any political slogan.

“I understand the protest; I don’t condone the violence,” Smith said. “I think there are a few bad people who make the good people look bad.”

Price, who’d only moved next door to Smith two years ago, said she “can’t get enough of this neighborhood.”

“All our neighbors are really nice,” she said. “They’re good people; they don’t deserve this.” 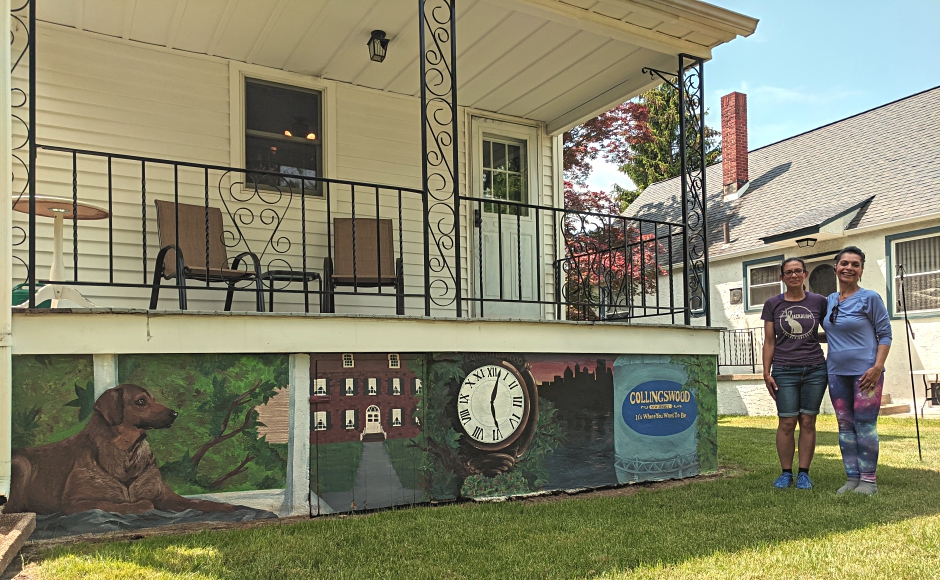 In contrast to the vandalism on her neighbor’s home, Price showed off a mural that Smith’s daughter, Samantha, had painted on the lower half of her rear porch two years ago.

It depicts the Price family dog, Jenkins, overlooking a handful of Collingswood scenes, from the municipal clock on Haddon Avenue to the Philadelphia skyline at Cooper River, to the water tower with the borough slogan.

It also commemorates the closeness of the neighbors who share a connection that extends farther than their property lines.

Smith, who is undergoing cancer treatment and lives with her elderly father, held back tears as she explained that she’d recently had the exterior of her home painted and didn’t know whether she could afford to clean up the damage.

“I’m really hurt,” she said. “This is such a beautiful, peaceful town. I have the best neighbors.” 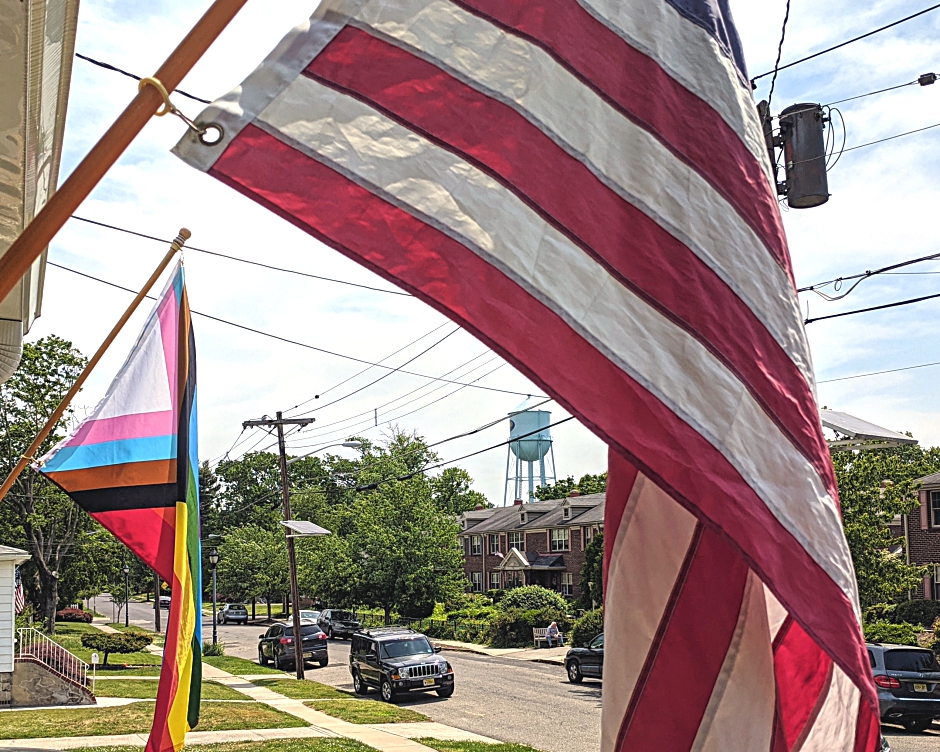 They were there to tell him that his SUV had been covered with graffiti while he’d slept.

After five hours with a Mr. Clean Magic Eraser, he’d managed to scrub it clean.

“It could’ve been worse,” Emeigh-McBride said.

Standing on his Eldridge Avenue porch, beneath an American flag and a multicolored flag meant to symbolize inclusion, Emeigh-McBride said he’s experienced the civic unrest in the area from many perspectives.

“My husband and I are both nurses in the city,” he said. “We’ve been protesting. I have family on the police force in Philly.

“I’m not in anyone else’s shoes but my own,” Emeigh-McBride said. “You can see all sides. I want everybody else to see all sides as well. 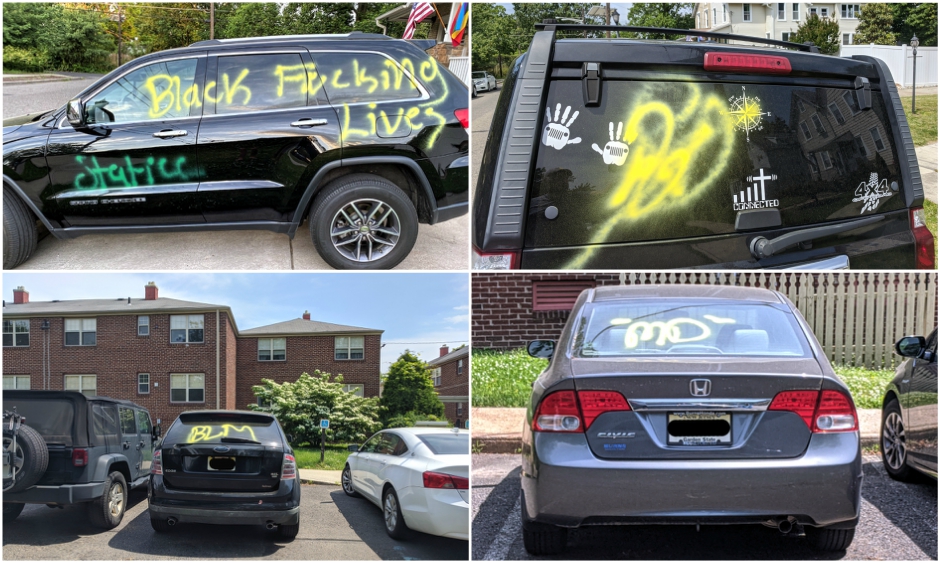 Across the street from Emeigh-McBride’s home, several cars and a dumpster had been tagged at the Pewter Village apartment complex.

Maintenance manager Jeff Rappa said he’d recovered a few cans of spray-paint there, from which he hoped the police could recover some fingerprints.

Security footage from the complex seemed to show several young people, hooded and carrying backpacks, randomly spray-painting cars across the street from the complex at about quarter past 11 p.m. Tuesday night.

To Rappa, “they seemed at the age to what’s in the parents’ minds to have them on the street with what’s going on.

“I support the cause for the protest, but this is not the protest,” he said. “It’s incendiary.” 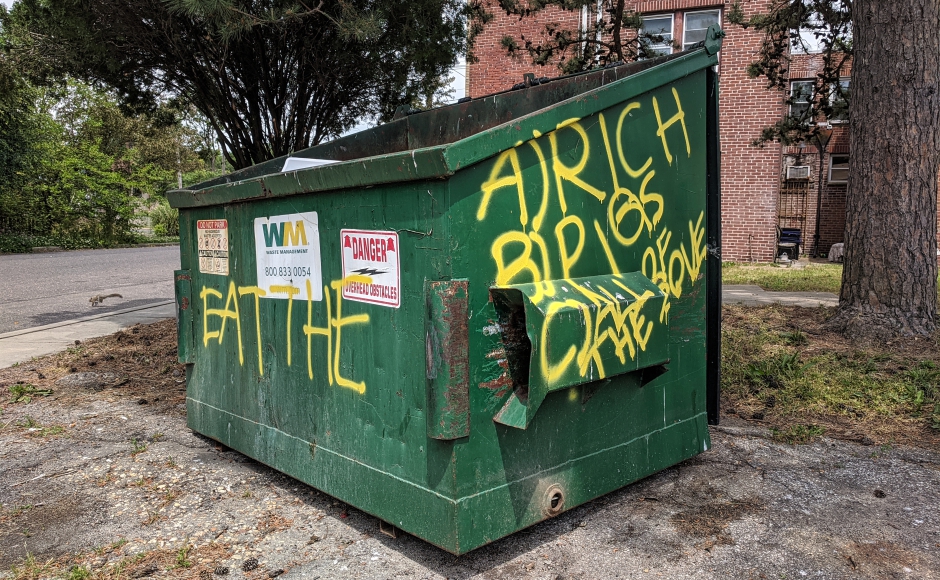 Multiple-choice graffiti on a dumpster at Pewter Village in Collingswood. Credit: Matt Skoufalos.

Collingswood Police Chief Kevin Carey said officers were investigating the incidents, but that they didn’t fit the definition of bias crimes (which require proof of specific victim-targeting on a discriminatory basis).

About 11 cars in all had been affected, Carey said.

A statement on the department Facebook page notes that, “prior to receiving the reports of vandalism, officers were dispatched to the same area for a report of juveniles running up and down the streets.”

Any residents with surveillance footage on the block are asked to contact Collingswood Police Det. Michael Manning at 856-854-2401, ext. 104, or mmanning@collingswood.com.