Now in its seventh year, the Collingswood High School digital production and audio engineering program is giving kids a veteran’s perspective on the music industry and the practical skills to participate in it. 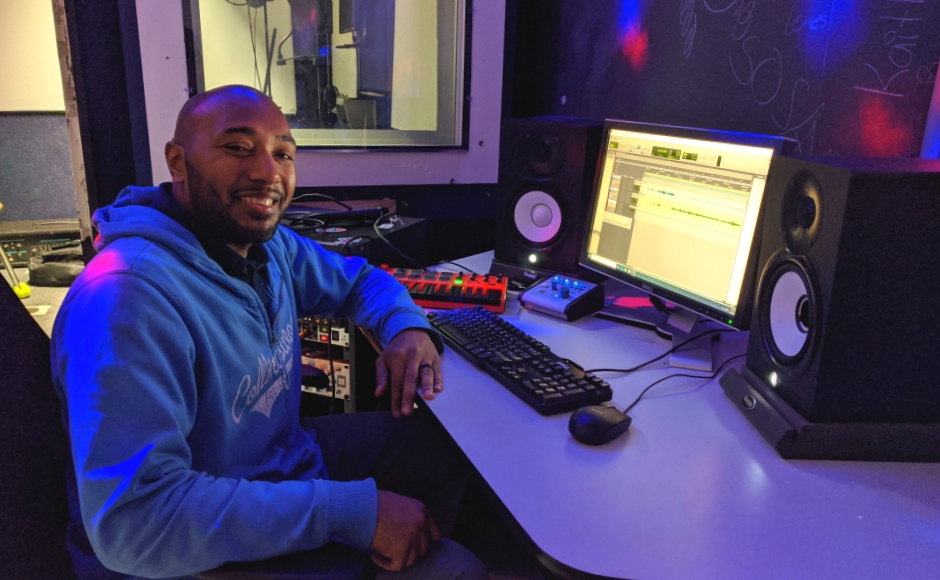 It’s hard to get paid in the music business, and it can often be just as difficult to make a difference as a teacher.

But somehow, Collingswood High School teacher Nate Ingram has found ways to be successful in both careers.

“I did listen to my dad and get the four-year degree,” Ingram said.

“But I was always doing music; always grinding,” he said.

“I wanted to be able to apply what I’ve been doing my whole life [to teaching].”

In 2013, as a new teacher, Ingram began laying the groundwork for a digital production and audio engineering program at the school. He surveyed students to gauge interest, got buy-in from his principal, Ed Hill, and launched the first class with a crop of 20 students.

“The response was enormous,” Ingram said. “Kids were scratching at the door to learn about new stuff.”

After some 80 to 100 kids were turned away for lack of capacity in the entry-level course, Ingram wrote curriculum for second- and third-level class sections, too.

By his fourth year of teaching, and with help from jack-of-all-trades audiophile John Wapenski, the classroom was outfitted with a recording booth, special lighting, and audio engineering equipment.

“The ingenuity was not easy, but we did it for five grand,” Ingram said.

Students in Ingram’s entry-level class learn how to navigate FL Studio software, which he described as “industry standard” among producers of hip-hop and electronic dance music (EDM). Teens typically grasp its functionality within a month, and then build on that knowledge throughout the rest of the course.

It’s an inversion of typical instruction that focuses on instrumental or vocal proficiency and music theory. 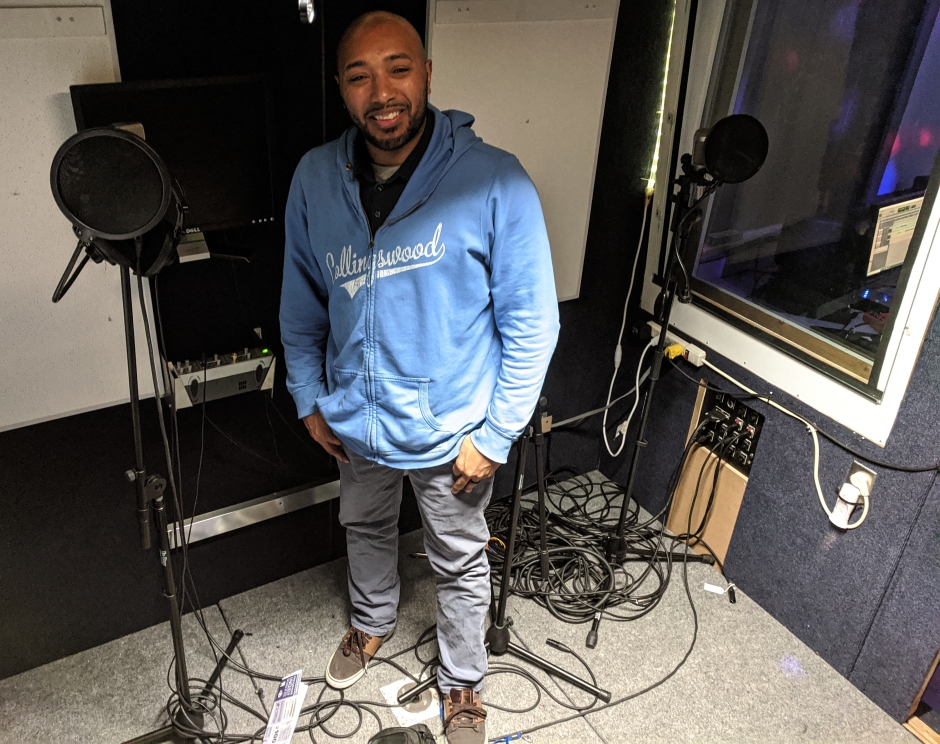 “Kids are becoming masters of the computer software and learning music on the back end,” Ingram said.

In the second level of the class, Ingram introduces live recording techniques via the FocusRite Scarlett 2i2.

That audio interface enables students to capture live sound so it can be edited on a digital workstation.

“They get introduced to microphones, polar patterns, the basics of cables, and we now have Pro Tools [music software, which is the]industry standard for live recording,” Ingram said.

“They’re now doing soundtracks and scores, learning Foley (sound effects) and ADR (automated dialogue recording),” he said. “At that level, it’s about what they might be interested in. They might get to fall in love with being a live recorder or mixing engineer.”

The third level of the class is the most advanced: a yearlong, capstone experience in which students create their own, full-length albums. They write, record, and produce the music as well as the album artwork. The workload is sufficient to earn them Camden County College credits, and Ingram is working to synchronize his curriculum with  programs at Rowan University next.

“Everyone has to engineer, and everyone has to record,” Ingram said. “They’re learning EQ, compression, reverberation; a lot of good professional things in this environment.” 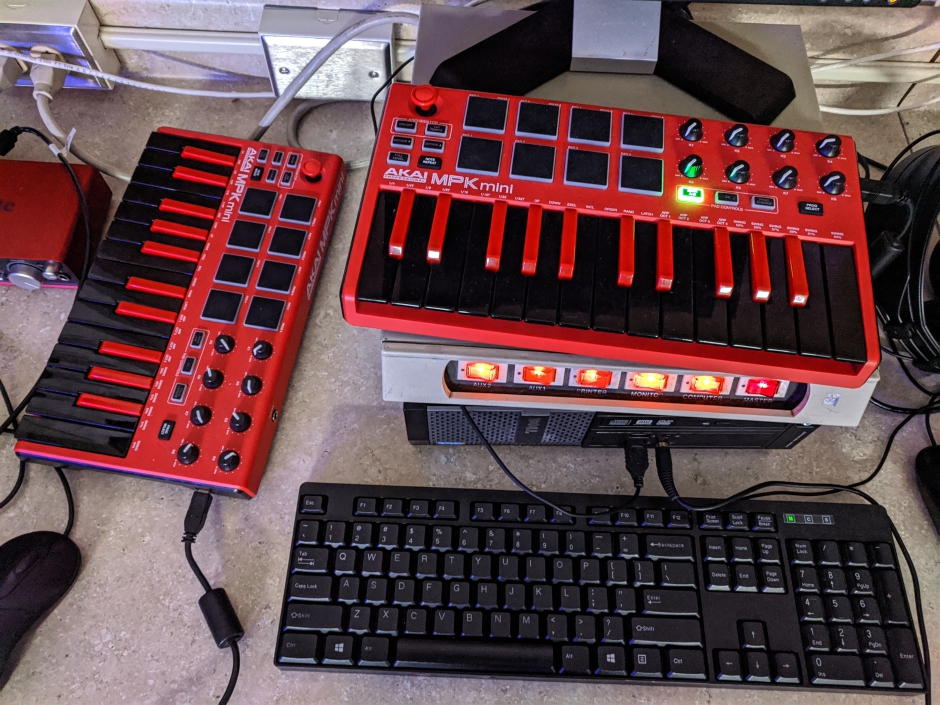 Students’ talents lie in different areas, and some are better performers than they are engineers.

But under Ingram’s eye, they all support one another in getting through the process, taking extra time in the studio whenever they can get it.

The experience also teaches them to negotiate a diversity of creative personalities in order to achieve their goal—a valuable skill in any career.

“I make them get out of their comfort zones, collaborate, and figure out a way to get on something different and make it work.”

From Sigma Sound to Room 105

If there’s anyone who can teach a generation of budding musicians what it takes to make it in the music business, it’s Ingram.

His father, Billy, is a seasoned electric guitar player; cousin James—yes, that James Ingram—has a couple Grammys for his R&B recordings.

For years, Nate Ingram’s four uncles have been Patti LaBelle’s live backing band. Together with Evette Benton, his aunts Barbara Ingram and Carla Benson comprised The Sweethearts of Sigma, providing background vocals for countless tracks produced under the supervision of Kenny Gamble and Leon Huff.

“I used to watch them gig and do shows,” Ingram said. “I always knew music was in my heart and in my blood. When college hit, I got serious about my music stuff.”

Ingram’s own career included hip-hop performance and production through the 2000s. His music was featured on satellite radio; he released albums and mixtapes, and even operated an independent record label and film company.

Since transitioning into coaching and teaching, Ingram has tried to pass on his knowledge and experiences to kids who someday hope to enter the music business. While encouraging them to forge their own paths, he also tempers their daydreams with a dose of realism.

“I lost a lot of money, but I can say I’m really proud of the work that I did as an artist and a producer,” Ingram said. “But it’s not just a dream and hoping that somebody finds you, it’s a grind. You have to pay first. That’s just how the game is.”

For students to make a living in music, Ingram wants them to learn that nothing comes for free. Whether it’s public relations, management, talent booking, or studio time, professional opportunities are forged in finance.

That’s why Ingram also encourages his students to be prepared for such moments when they surface; to develop the resilience and patience to hone their material until it’s ready to be released; and to keep building a catalogue of work.

“You never know when the world is going to be ready for your sound, but you always have to be ready for the world,” he said. “The industry that we’re in, the perception is ‘this guy came out of nowhere and now he’s famous.’

“There is a grind and a structure to what people are doing,” Ingram said. “The work that you put in, 99 percent of it is never seen.” 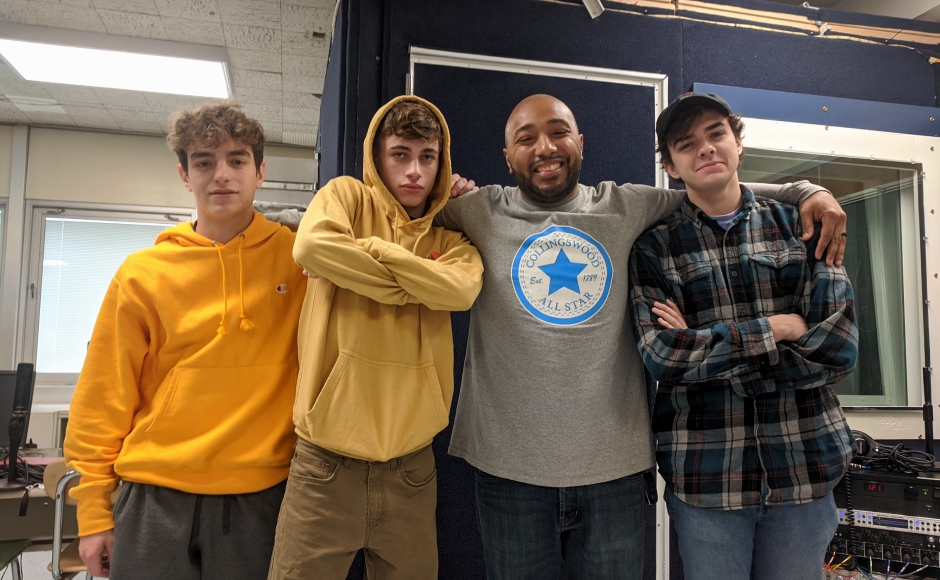 But they speak fondly about his instruction and about the experience of learning from him, underscoring the point that getting a music education isn’t always about producing art.

When he signed up for Ingram’s class as a freshman, Reganold Robinson described himself as a very shy kid with “many academic and personal hardships” who had no expectations of the class.

“By my junior year, Mr. Ingram had become my mentor,” Robinson wrote. “He gave me a new outlook on school and life. He would push me to excel in everything I had done, and it stemmed from music.”

In addition to supporting Robinson’s efforts in class, Ingram “took time out of his day to listen to me as a person as well, and that was something I never had in a teacher,” Robinson said. He and his classmates took first place in the state Technology Student Association conference in 2017, and were invited to the national competition. They didn’t place on the bigger stage, but it didn’t matter to Robinson, who still rates it all as “the best experience I have ever had.

“I didn’t have any big personal achievements until then, so it was well worth it,” he said.

Robinson said that Ingram also pushed him to go to college, where he is now in the third year of a bachelor’s degree in nursing. They still maintain contact, and Robinson said he knows Ingram “will always be there for me as much as he can.”

Recent CHS graduates Tyson Liberto, Clay Pasternak, and Tyler Refsnider still maintain a collaborative relationship they established in Ingram’s class. All three have gone on to undergraduate coursework in music production, and they continue to develop their technique. 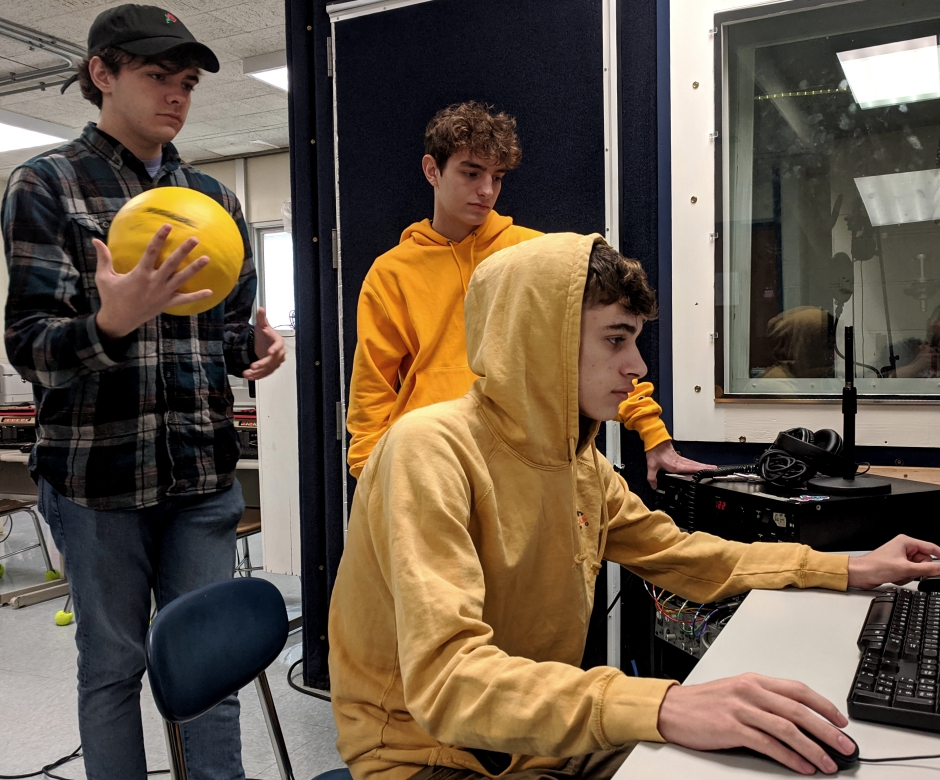 From the first day in Ingram’s class, they were connected by their unfamiliarity with the subject matter, Liberto said.

“We were all in the same boat, [but]  no one felt intimidated,” he said.

“Any time somebody came up with a cool drum pattern or a nice melody, everybody got super-excited.”

“People ask all the time, ‘What kind of class are you taking?’ and I’d bring up music production in high school,” Pasternak said.

“They’d never heard of it before.

“I felt like we had a special thing, especially with Mr. Ingram,” he said. “His teaching style and his connection with the students was different from anything any other school could offer.”

“Coming to this class, Mr. Ingram gave me the passion for music,” Refsnider said. “Beforehand, I had no idea what I wanted to do. I was just here going to school doing whatever.

“When I got here, this is what I wanted to do,” he said. “This room really cultivates putting your mind to it and working to improve. Apart from music, I learned a lot of life lessons in his class. Even now, he still calls me once every couple weeks. He’s really pushing me to try and do something.”

“The music program is full of passion and talent,” Liberto said. “I can see a lot of future. There’s a lot of kids who will go through the program and do great things.”