Officers say the programs reflect efforts to tailor law enforcement responses to community members with behaviors that interfere with communication. Families are already signing up. 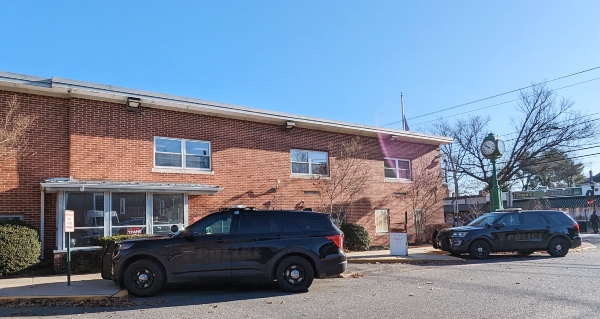 Police departments across Camden County are establishing voluntary registries for residents in their community who are autistic or developmentally disabled, in the hopes, they say, of creating safer encounters for them with law enforcement.

According to the nonprofit organization Autism Speaks, autistic people may have as many as seven times the number of interactions with police that their neurotypical peers do.

Because autism encompasses a range of symptoms largely rooted in “social communication challenges” and “restricted, repetitive behaviors,” according to Autism Speaks, autistic people may be hyper- or hypo-sensitive to sensory stimulation, meaning they may over- or under-react to the lights and sirens of a police cruiser, ignore directives from officers, or present other behaviors that could complicate an encounter with law enforcement.

The thinking behind creating a registry of autistic people in a community is that it will create better outcomes during these encounters by offering police details about residents’ personalities, routines, attractions, and triggers. Police, in turn, can use this information to tailor their responses to the individual, and mitigate the potential to misinterpret behaviors associated with autism as threatening or non-compliant.

“Learning how best to interact with people living with disabilities helps provide the best services possible to them,” Haddon Heights Police Lieutenant Dan Kinkler said. “Information is everything in our profession.”

To Kinkler, the registry reflects an effort by his department to elevate the level of service it provides to borough residents. Although it was developed to make accommodations for autistic people, or those with developmental and behavioral issues, Kinkler said anyone who wants to volunteer their personal information to manage interactions with law enforcement is welcome to avail themselves of it.

“If I believe that this database would be beneficial to somebody, I would certainly have that conversation with their parents,” he said.

“One of the best benefits of having a small-town police department like Haddon Heights is every officer knows who we interact with on a regular basis,” Kinkler said. “They know who that person interacts with best in the police department, and we can tailor our services to that individual.” 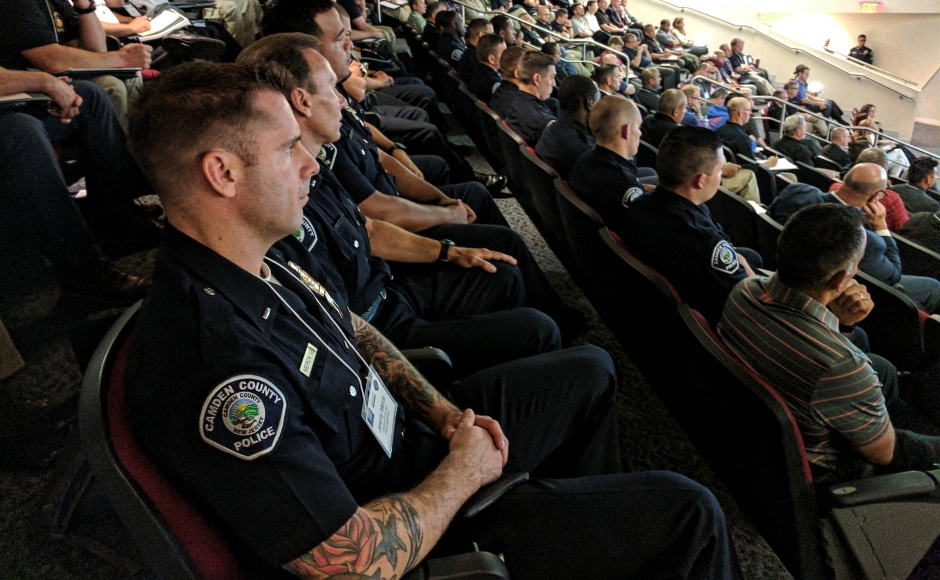 Kinkler described the crime load in Haddon Heights as “fairly low,” and generally rooted in property offenses rather than violence.

Nonetheless, he noted that call volumes have increased in the wake of the novel coronavirus (COVID-19) pandemic, especially in responding to people in need of crisis intervention.

They are also trained in peer intervention techniques like ABLE (Active Bystander for Law Enforcement), and are required to participate in CLEAR (Community Law Enforcement Affirmative Relations) continuing education on cultural diversity.

However, Kinkler believes that the autism registry program supplements that education with a meaningfully different knowledge base. For a start, the information it contains will be “readily accessible” to any agency sharing the Camden County InfoShare Regional Records Management System (RMS), which includes “an overwhelming majority” of local police departments, he said.

“It’ll have emergent contact information for the person who requested to be in the database, their photograph, their address, and a notice that says, ‘this person is living with autism spectrum disorder, or a disability that inhibits them from doing x, y, z,’” Kinkler said. “If the officer enters their name, they can see there’s an entry here for this person.”

Information entered into the RMS is secured and maintained by CSI InfoShare, and access to the database is limited to law enforcement, and is governed by regulations that prohibit its misuse. Despite that, Kinkler said he can appreciate that anyone registering with the system might be concerned about the security of the information committed to it.

“People should understand that this information is regulated,” he said. “If anybody believes there’s a better way for the system to be put in place, or better information people think should be added, please let us know. We’re open to criticism.” 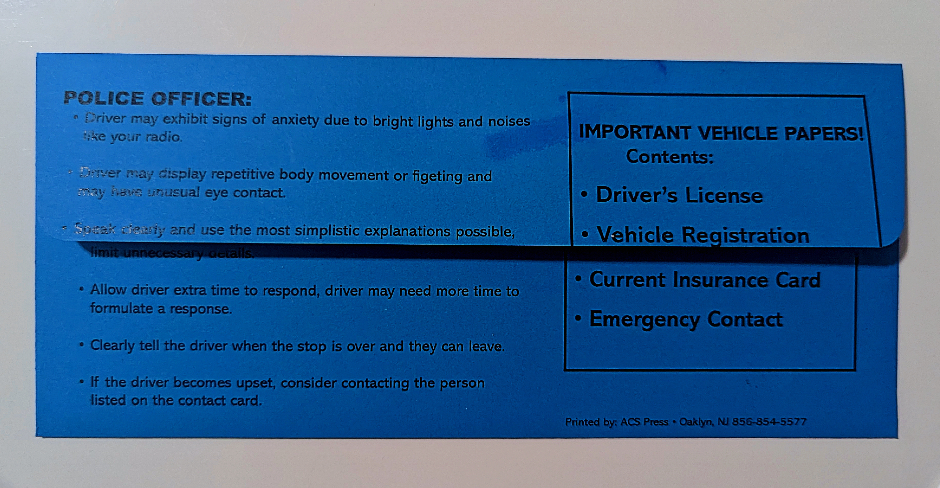 Similarly, Oaklyn Police have established a voluntary registry that they say will help them accommodate residents with autism, developmental disabilities, and Alzheimer’s disease.

In addition, the department has implemented a “blue envelope program” to help autistic drivers communicate their information to police in the event of a traffic stop or motor vehicle crash.

Residents can visit the borough police department to pick up an envelope in which to store their vehicle documents.

Oaklyn Police Sergeant Colby Bryszewski said the program was developed after the department was visited by Malvern, Pennsylvania resident Alex Mann, who’s toured more than 250 police departments across the region to spread awareness about police interactions with autistic people like himself.

Bryszewski said the impact of meeting an autistic person, and hearing Mann describe his life experiences first-hand, gave officers a deeper appreciation of how to interact differently with people on the autism spectrum.

“His biggest point was to treat them like they’re one of your own kids,” Bryszewski said. “Get down on their level, get eye to eye, slow everything down. If you know what makes them more comfortable, then do it.

“You get taught all these cues, but our interactions in the street are limited in time,” he said. “When you have Alex here for a few hours, you notice a lot more of the things he’s talking about.

“Inside, the barriers are down; you’re able to sit and talk,” Bryszewski said. “It wasn’t like being on a call. He put out some of his triggers and how he reacts to them, and we had a chance to notice it.”

Meeting Alex “sparked a conversation about what could we do to try to bridge the gap between us and the autistic community,” Bryszewski said.

“We created a registration form for their family to provide us a lot of information about them – a picture, places they like to frequent, activities they like, whether they’re able to be tracked – and then we mirrored the blue envelope to go along with it,” he said.

Although it’s impossible to catalogue the specific accommodations that would benefit every autistic person whom police may encounter, Bryszewski believes the information-sharing program will help officers in communities throughout the region to improve their interactions in similar circumstances.

“If you have someone in your family who you fear [having] an encounter with law enforcement, privacy aside, I’d rather safety first,” he said. “It all goes towards aiding those situations where there is no blue envelope present. It’s going to spread that awareness for people who may not have known about it.”

Brie Wexler-Latini of Marlton, an educational advocate with the Camden County Family Support Organization, which is “designed, built, and run by family members of emotionally and/or behaviorally challenged children,” worries that not enough police have training specific to dealing with autistic people or those with behavioral or developmental issues.

That’s especially concerning to her given that the only options for families dealing with a child in crisis are to call a crisis center, EMTs, or the police.

“If that’s the system, then the people who show up need to know what to do,” Wexler-Latini said. “The police get hung out to dry on this, too; they get the calls.

“But what do most kids know about the police?” she said. “That [when they show up] you’re in trouble. It can exacerbate things.”

Moreover, Wexler-Latini pointed out that, despite the good intentions of these registries, people with disabilities generally carry the bulk of the responsibility for managing social interactions with their neurotypical peers — a tall order that’s magnified significantly when interacting with police.

“That exchange of information might not be enough,” she said. “Can a person with disabilities exercise the executive function skills in a moment of panic to pull out their card, or do these things? Do you really have to out yourself as an autistic person to make sure someone doesn’t shoot first and ask questions later?

“My son is 13,” Wexler-Latini said. “As his mom, from the perspective of keeping him safe, you can have whatever information you want. As an advocate, it’s not enough to just have a registry. Is that information going to change someone’s mind if the disabled person is my blonde-haired, green-eyed son, or if that person is a six-foot-two person of color?

“It’s so hugely systemic that people who are disabled are ‘othered’ in that way, that it’s possible that police interaction is still five or six steps away from that issue,” she said. “It’s a hugely layered thing. I don’t think it has any set starting point; there’s a lot of places where it has to happen.”

‘A lot of times, the crisis is created by the cop not understanding what he’s dealing with’

Among those people who can understand deeply many aspects of this issue is retired Tinton Falls Police Captain Gerald Turning, a 25-year law enforcement veteran, and father to an 18-year-old autistic son, Eric.

That system was established when the boy was 12, and Turning said he’s convinced that it was the right decision for his family.

“A lot of times, our first introduction with someone with special needs comes from something bad happening to interject a cop into their lives,” Turning said: “a motor vehicle crash, an anxiety issue, having a behavior out in public where a witness calls it in.”

“However we get introduced into that family’s life usually is misunderstood from the get-go,” he said.

“When that cop is dispatched to that call, a cop is going into a certain mode where he either wants to save and protect the victim, or bring the aggressor to jail,” Turning said.

“He doesn’t understand that he’s dealing with someone who doesn’t have any intent; who’s having an entirely different crisis than he thinks he’s having. That’s where tragedy happens.”

As much as Turning said he believes in the value of the specialized, de-escalation and crisis intervention training that police undergo, he thinks the information in a registry helps officers manage the bulk of their interactions with autistic people that are not “automatically a crisis.”

“Maybe they’re a witness to a crime; maybe they’re a suspect in a crime,” Turning said. “Maybe they’re a suspicious person. All these interactions are happening all the time, but they don’t rise to the trigger level of these crisis calls. So we have to train the cops to know what they’re dealing with when things are calm and cool.

“I’m glad CIT training is out there, but it’s almost a false sense of security,” he said. “A lot of times, the crisis is created by the cop not understanding what he’s dealing with.”

Similarly, in situations where crisis response teams are the preferred first call, Turning points out that the first person on the scene nonetheless might be a police officer who could use a subject’s personal information to manage the scene until mental health professionals can arrive.

“Information is how you short-circuit what could possibly go wrong in that situation,” he said.

In addition to managing and maintaining a data registry to help support the needs of autistic people in their local communities, Turning believes local law enforcement should also maintain regular interactions with people from a variety of backgrounds for the same reasons: to establish cultural competencies and head off potentially negative situations before they can occur.

“We have to get cops in rooms with everybody,” he said. “Whether you want to talk about a racial issue, or special needs, the answer is relationships.

“What jolts me awake at night is my son being misunderstood by somebody I call brother, and being hurt,” Turning said. “How can I make sure my son is safe? The conclusion I’ve arrived at is information.

“Any segment of society should feel comfortable seeking that out,” he said. “Registry is one effort; training is another effort. It’s not just one thing being done.”