Plus: another 109 local residents tested positive, bringing the total number of those infected by the virus to 7,389. 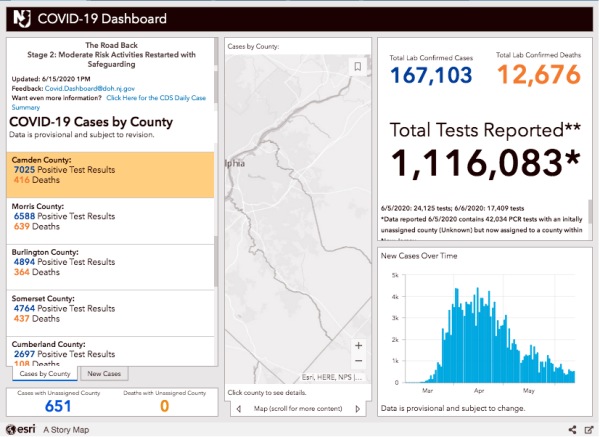 After reconciling its own reports with New Jersey state health records, Camden County has discovered 58 additional resident deaths during the peak of the novel coronavirus (COVID-19) pandemic.

Those deaths occurred between April 13 and May 30, county officials said Monday, bringing the total number of local fatalities to 410.

Within Camden County, COVID-19 has also sickened 7,389 residents, 109 of which are new cases announced June 15.

In a briefing Tuesday, Camden County Freeholder-Director Lou Cappelli said those deaths were the result of confirming COVID-19-related deaths that were initially deemed “probable,” and that another six deaths may be added to those rolls.

“It’s just a backlog of information and data coming from the state,” Cappelli said.

Throughout New Jersey, 167,103 people have been sickened by COVID-19 and 12,676 have perished from related causes.

The statewide average of COVID-19 spot positivity testing stood at 2.6 percent June 11; in South Jersey, it’s more than double that, at 5.25 percent. Spot positivity is a snapshot statistic, and the state’s report excludes serology tests, which can confirm the presence of COVID-19 antibodies, but not whether a patient actively has the virus.

Rt, or the estimated rate of transmission of new cases of the virus, was 0.65 on June 13. Those figures indicate that every person infected with COVID-19 is infecting less than one other person, on average, which means the number of new cases continues to decline.

According to the state health dashboard, on June 15, Camden County was tied with Passaic County for fifth in new cases of COVID-19, with 18. 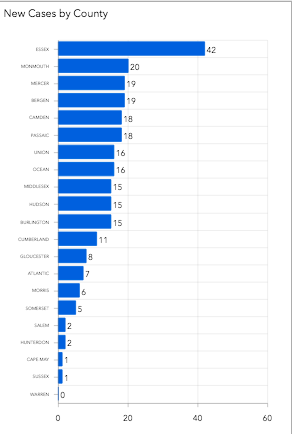 LTCs are believed to be associated with 70 percent, or 285 of the 410 total deaths in Camden County; 282 were residents and three were staff.

More than half the 56 LTCs in Camden County (29) have experienced at least one case of COVID-19.

“Around the country there are growing concerns regarding rising case totals and the beginning of a new wave of viral spread,” Cappelli said in a written statement Monday.

“The truth is that until we have a reliable treatment or an effective vaccine, we will likely continue to see increases and decreases in viral activity to varying degrees,” he said.

“The only way to truly protect yourself and others is to continue social distancing, wear a mask in public, stay home when you are sick, and practice good hand hygiene,” Cappelli said.