The announcement brings the local death toll to 464 lives lost and 7,793 sickened by the virus. 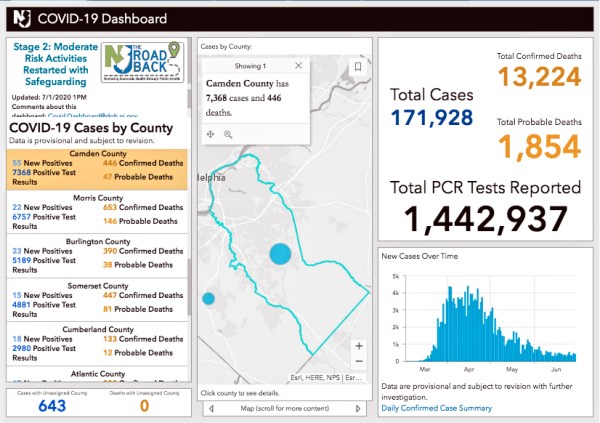 Six more Camden County residents have died from complications related to novel coronavirus (COVID-19), and 39 others have been infected with the virus, the Camden County government announced Wednesday.

That brings the local death toll to 464 residents lost to the pandemic and 7,793 others sickened by the virus.

Throughout New Jersey, 171,928 people have been sickened by COVID-19, and 13,224 have perished from causes related to the virus; another 1,854 deaths have been deemed to be probably COVID-19-related as well.

Rate of transmission (Rt) down slightly since yesterday

Rt, or the estimated rate of transmission of new cases of the virus, was 0.82 percent on June 28, down slightly from day-ago readings of 0.88.

That figure indicates that every person infected with COVID-19 is infecting less than one other person, on average. However, it has continued to climb steadily from a low of 0.62 recorded on June 9.

“Only three counties have an Rt over 1, which means an increased rate of spread, where last week, there were eight,” Governor Murphy said in today’s briefing.

According to the New Jersey Department of Health COVID-19 dashboard, on July 1, Camden County led the state in new COVID-19 cases, with 55.

“This pandemic is not over, the threat has not been eradicated, and our mission has not been accomplished,” said Camden County Freeholder-Director Lou Cappelli in a statement.

“The United States is once again breaking its own records for new cases each day,” Cappelli said. “While New Jersey has been on a more positive trajectory, we must remember that this is because of our mitigation strategies, such as wearing masks and social distancing, not in spite of them.

“We have to adhere to these guidelines strictly if we are going to prevent further loss of life and sickness in our community,” he said.

LTCs are believed to be associated with 66 percent, or 302 of the 458 total deaths in Camden County; 299 were residents and three were staff.

More than half the 56 LTCs in Camden County (30) have experienced at least one case of COVID-19.