Wayne Bauer stepped down as chief of the Merchantville Police Department after a 31-year career. His replacement, Richard Grassia, said Bauer established a high standard that he’ll work to maintain. 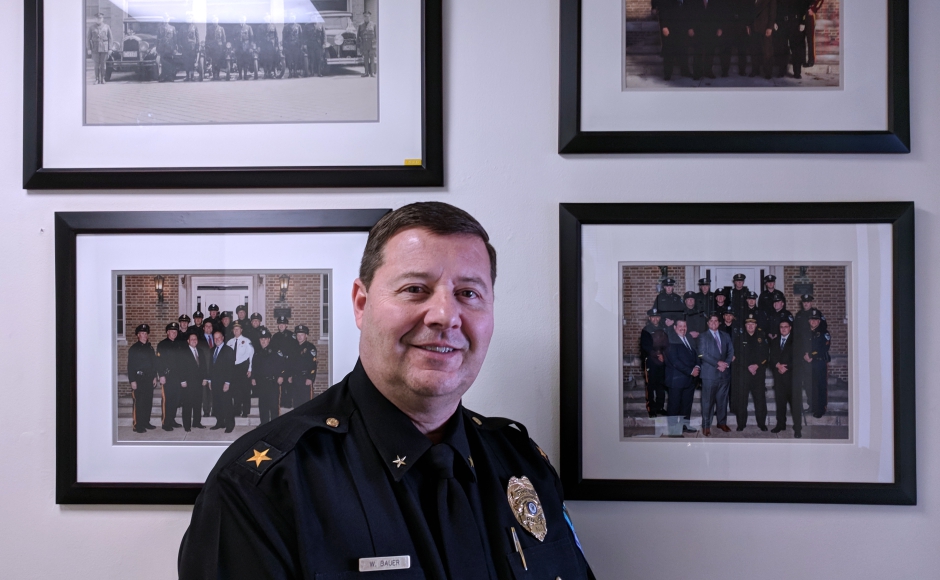 Wayne Bauer was chief of the Merchantville Police Department for 13 years. He retired in February 2018. Credit: Matt Skoufalos.

Before he was a police dispatcher, Wayne Bauer learned a lot about Merchantville’s finest in the four years he spent with a local plumbing and HVAC company.

When he finally graduated the academy and joined the force, Bauer realized the transition had been a smooth one, not only because of the camaraderie of the department, but because so many of its members had been his customers.

In 31 years with the department, Bauer never lost sight of that small-town perspective. He spent seven years as a patrolman, three as a patrol sergeant, and eight more as a detective sergeant before rising to the rank of chief, which he held for 13-plus years until his retirement last month.

For the most part, little has changed in that time. But during his final years, Bauer oversaw a number of technology initiatives that helped Merchantville Police modernize their technology, processes, and equipment. He oversaw the installation of in-car management software, an e-ticketing system, and officer body cameras.

Even in a nice, small, community, such advancements are necessary to help authorities do their jobs better.

“We don’t approach things much different now than when we did 30 years ago,” Bauer said. “There’s more information out there, and I think people think it’s changed more than it has. You’ve got to err on the side of caution.”

One of Bauer’s only regrets was the department’s failure to solve the 1984 killing of Edward Bauer (no relation), a cold case the Courier-Post revisited in 2014. The chief said he still keeps in contact with the victim’s widow.

“Not being able to clear that case really bothered me,” Bauer said. “We thought we were really close, and for certain circumstances, it was not able to be closed.” Wayne Bauer was chief of the Merchantville Police Department for 13 years. He retired in February 2018. Credit: Matt Skoufalos.

Otherwise, Bauer said he’s enjoyed the career he’s had largely thanks to his coworkers.

He considers himself fortunate to have served the community through his profession, and credits his fellow officers with having helped him along the way.

“I used to say, ‘Everybody loves a fireman and they hate a cop, but they’re always there when you’re at your worst.’

“You’ve got to be able to be that calm person in the middle of the storm,” he said.

In retirement, Bauer said he’s looking forward to golfing and working outdoors. Despite fielding a few offers, he’s in no hurry to pick up a second career before enjoying some time off. Most importantly, the former chief enjoys the support of a family who knows how hard and for how long he’s worked.

Bauer’s replacement is Richard Grassia, a Deptford Township native who has been with the department since March 2010.

Merchantville does not fill ranks above detective Sergeant, the position for which Grassia had been training since early 2017 to replace the retiring Stephen Morrone. When Bauer gave his notice, Grassia said he was surprised to have been offered the position. 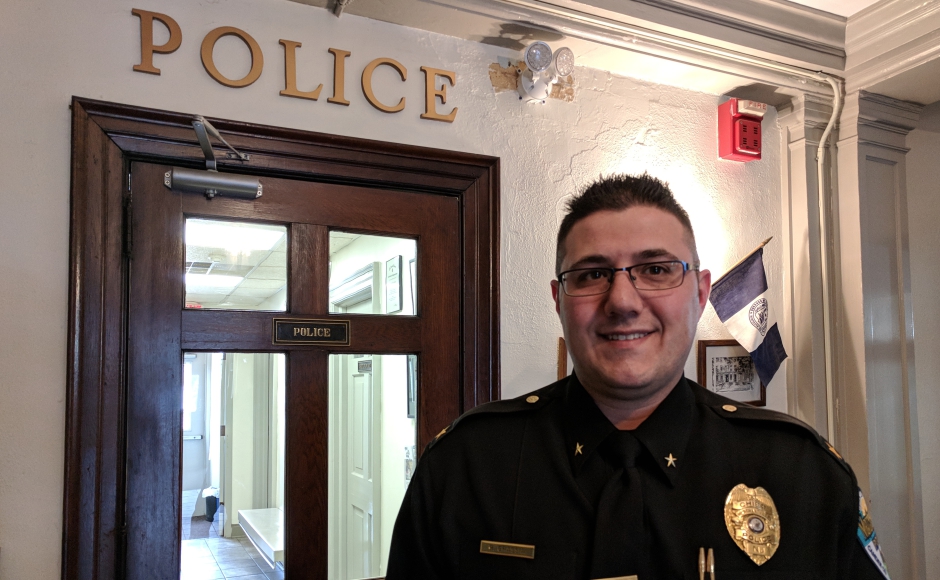 “How fast my career’s progressed in a short amount of years is unbelievable.”

Married with two children, Grassia is a graduate of Richard Stockton College who had initially planned to pursue a career in teaching.

He entered the police academy in 2007, and spent two years as a Class II Officer in Washington Township before joining the Merchantville Police in 2010.

Right away, he learned how close-knit the department is.

“When I first got hired on patrol, the sergeant at the time was Mike Reilly,” Grassia said. “I was addressing him as sergeant, sergeant, sergeant. He stopped the car, and said, ‘My name is Mike. Call me Mike.’

“That’s when I knew that the officers here had a tighter bond than in other towns,” Grassia said. “That’s what sets this department apart. Every one of the supervisors I’ve had, retired and current, I couldn’t ask for better from them.”

Even after retiring, Morrone and Bauer “are willing to, and actually do, come in when you ask for help,” Grassia said, which is helping ease him into the new role. He said it’s a welcome offer, as the department is in flux amid several transitions.

In addition to the retirements, one challenge is its youth. The longest-serving officers have upwards of 20 years in; the newest have as little as a month. Three new hires have been working as police less than 18 months. Others have been injured on duty, and also must be replaced. That’s an early test of the strength of Grassia’s leadership. 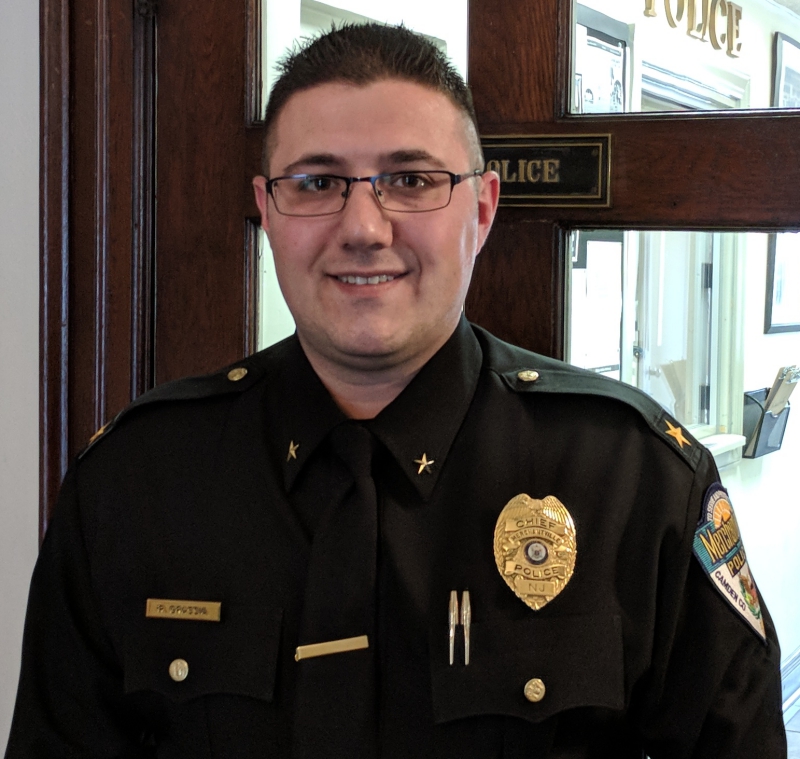 “It’s our department to rebuild, [and]we’ve taken everybody’s input into consideration,” he said.

“These guys should have as much input on what happens here as I do.

“As far as the bond that’s here, we definitely have it,” Grassia said.

In the short term, Grassia said he’d like the department to expand its attitude of community involvement.

He feels compelled to follow Bauer’s approach to National Night Out in “outdo[ing]himself year after year,” and would also like to build on the technological foundations his predecessor laid.

Grassia also spoke about establishing joint trainings with Merchantville Fire Chief Kevin Patti whenever possible, and about pushing forward with upgrades to the physical infrastructure of the department.

“I’m hoping we can get it done within the next three years,” he said. “I always like how this town has an open-door policy, which is comfortable for the residents. I think we can all agree that security is really paramount. We’re at this stage where stuff needs to be locked down.”

Above all, Grassia said he is committed to maintaining the quality of service the department maintained under Bauer.