Forty-two-year-old William Ray of East Orange faces multiple charges in a December 22 bank robbery in which police say he made off with $76,000 in cash. He is in custody. 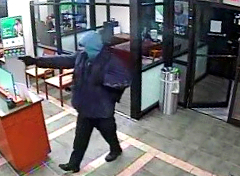 Surveillance footage of a suspect in the Investor’s Bank robbery in Cherry Hill. Credit: CCPO.

An East Orange man is being housed at the Camden County jail in connection with an armed bank robbery in Cherry Hill last month.

Forty-two-year-old William Ray faces charges of first-degree robbery, second-degree weapons offenses, and fourth-degree aggravated assault in connection with a robbery of the Investors Bank in the 1900 block of Route 70 East.

According to the Camden County Prosecutor’s Office (CCPO), Ray allegedly entered the bank at 4:43 p.m. December 22, and then held employees at gunpoint.

During the alleged robbery, Ray is also accused of having attempted to lock bank employees in a vault before allegedly fleeing with some $76,000 in cash. 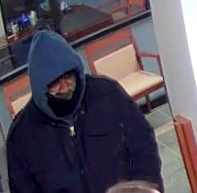 Surveillance footage of a suspect in the Investor’s Bank robbery in Cherry Hill. Credit: CCPO.

At 6 a.m. on December 30, officers from police departments in Cherry Hill, Moorestown, East Orange, Newark, along with agents from the FBI and the CCPO, executed a search warrant at Ray’s East Orange residence.

Although that warrant service did not yield an arrest, authorities were able to locate Ray after subsequent investigation from Cherry Hill Police and the CCPO Major Crimes Unit.

All persons charged with a crime are considered innocent unless and until proven guilty in a court of law.