Richard Cuneo has operated the business in a two-story barn on the property for 35 years. Now he says it’s jeopardized by a month-to-month lease and a plan to bring another Dunkin Donuts to Route 70. 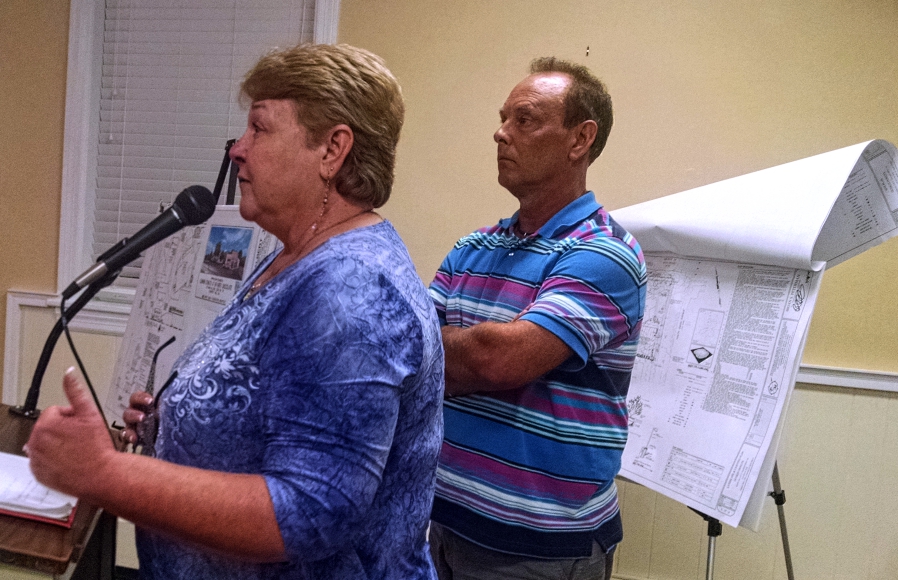 UPDATE (12:30 p.m. August 16, 2016): James Candy CEO Frank Glaser, who owns the Bayard’s Chocolate House property, said he has no intention to terminate Cuneo’s lease prior to consummation of the Dunkin Donuts deal.

Glaser said that when he last spoke with Cuneo, he advised him to “start looking right away” for an alternative site for his business. He said he hadn’t considered whether Cuneo might be able to incorporate the Flower Barn within the Bayard’s facility on the site, but conceded, “It’s worth thinking about.

“If I can help [Cuneo] out any way I can, I will,” Glaser said. “If I could figure out a way to keep him on the property I would.”

Whatever the fate of the Dunkin Donuts deal, Glaser said that Bayard’s “is tradition” in Cherry Hill, and has no plans for the chocolatier to vacate the site.

“Development is development,” he said, pointing out that with the impending closure of the Taj Mahal Casino, his own Fralinger’s Salt Water Taffy location there will also be forced to move.

For 35 years, Rick Cuneo has operated the Cherry Hill Flower Barn out of the two-story building in the parking lot of Bayard’s Chocolate House on Route 70.

But plans to redevelop the property into a Dunkin Donuts don’t seem to include preserving his business, and conversations with his landlord, with whom he is on month-to-month terms, do not inspire optimism, Cuneo told the Cherry Hill Planning Board Monday night.

“I just found out two weeks ago that this was happening,” Cuneo said. “I was never given this information.”

Cuneo said he’d heard from a neighbor on South Harvard Avenue that his shop was scheduled to be demolished as part of the Dunkin Donuts site plan, but as a tenant on the property, was never noticed about the deal directly. When Cuneo called his landlord, James Candy Company CEO Frank Glaser, he was told that the parking lot was being sold to Dunkin Donuts franchise manager Alan Lauer.

Cuneo then contacted Lauer to see if there was any way to keep operating his business on the property, and “Mr. Lauer said no,” he testified.

Cuneo said he doesn’t want to have to relocate. A Cherry Hill resident, he has personal and business connections to its funeral homes, houses of worship, and schools that took years to build, he said.

“I know progress goes on,” Cuneo said. “I’m still young, and I still have a viable business, which I don’t want to lose. I’ve serviced the community for 35 years and I love what I do. I don’t want to go out of Cherry Hill.”

Attorney Peter M. Rhodes of the Haddonfield firm Cahill, Wilinski, Rhoads, & Joyce told the board that Lauer’s contract to develop the parcel “calls for a tenant-free property.”

While acknowledging that Lauer “would permit [Bayard’s] to stay,” the contract to purchase the lot “is obviously contingent on being able to do what we want to do,” Rhoads said.

Cuneo’s sister, Barbara Nardi, asked the board whether the Flower Barn had any legal recourse to preserve its site.

“In the event that that building is demolished, a longstanding small business owner is going to be displaced,” she said. “What is our recourse? Are there relocation monies that are going to be available?”

Planning Board solicitor James Burns told Cuneo and Nardi they would have 45 days to appeal any action by the board. Noticing laws only cover the property owners, not their tenants, he said. Burns urged Cuneo to review the terms of his lease with an attorney.

“I don’t know what rights you have,” Burns said. “If you’re month-to-month, then, on proper notice to you, the lease can be terminated.” 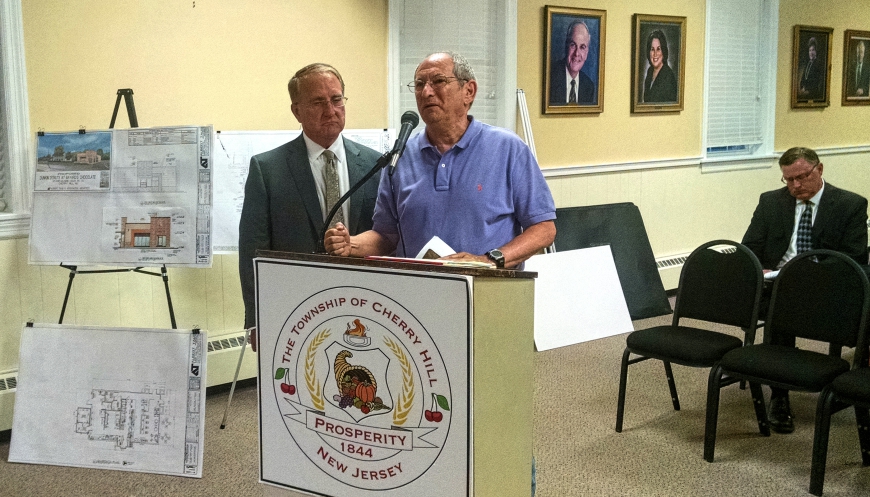 Even without weighing in on the future of the Flower Barn location, planning board members found plenty to criticize in Lauer’s site plan, including its parking allocation, proposed traffic flow, and signage.

Lauer, who oversees 19 Dunkin Donuts locations, said the store could average 70 customers per hour during peak operations from 7 to 9:30 a.m., 65 percent via its drive-through business.

Drive-through orders are typically resolved within two minutes, and the Bayard’s site could accommodate a queue of as many as six vehicles, Lauer said. Another 25 vehicles per hour could park and enter the facility to be served, with the average visit from customers who choose to park lasting five minutes in total, Lauer estimated.

However, the site plan he presented Monday only included 22 customer parking spots, 11 short of the 35 required by township statute. The plan also hinged on exemptions from minimum residential buffers and parking within them, proposed a loading area for deliveries 20 feet short of the standard, and contained parking stalls a foot shorter than the minimum requirements.

Engineer Brian Peterman of the Gibbsboro firm Peterman Maxcy Associates described the numerous variances the property would require as mostly “continuation of existing non-conformings.” Despite the grandfathering appeal, the board questioned whether the site was sufficient to hold overflow traffic without spilling into the highway, whether its signage distracted from that of Bayard’s, and whether the pedestrian route spelled out in its design would be functional to customers who parked onsite. 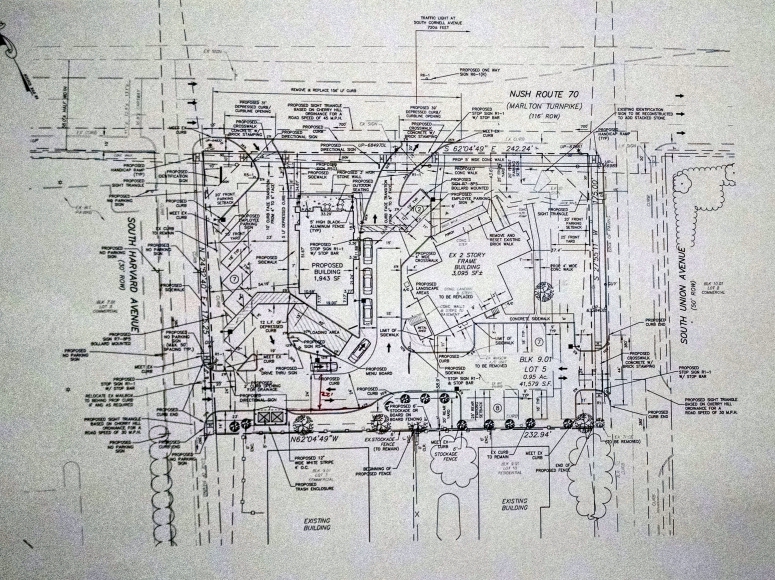 “If you get into a situation with more than six, seven vehicles in the queue, now they’re sitting in a drive lane,” said board member Stacey Arcari.

“How do they get out of the parking spaces and how do they bypass the vehicles that are in the drive aisle?”

Board member Carolyn Jacobs criticized the plan for what she described as a disregard for pedestrian safety, and for proposing signage that would obscure the existing Bayard’s sign.

“I can’t see how you can use this driveway to access both Dunkin Donuts and Bayard’s,” she said. “We don’t want to make it impossible for people to safely find the entrance and to safely navigate that site. If there are two businesses on this one parcel of land, I think we owe it to that other business to keep that business as viable as it possibly can be.”

Cuneo and Nardi also testified that Lauer’s site plan is insufficient to support the volume of traffic the Chocolate House draws during holidays.

“There are times when there are 100-plus vehicles at Bayard’s for Thanksgiving, Christmas, Valentine’s, Mother’s Day, Easter,” Nardi said. “There’s a good portion of those 12 months that Bayard’s is very, very populated.”

Board chair John Osorio offered Lauer the option of postponing the application. 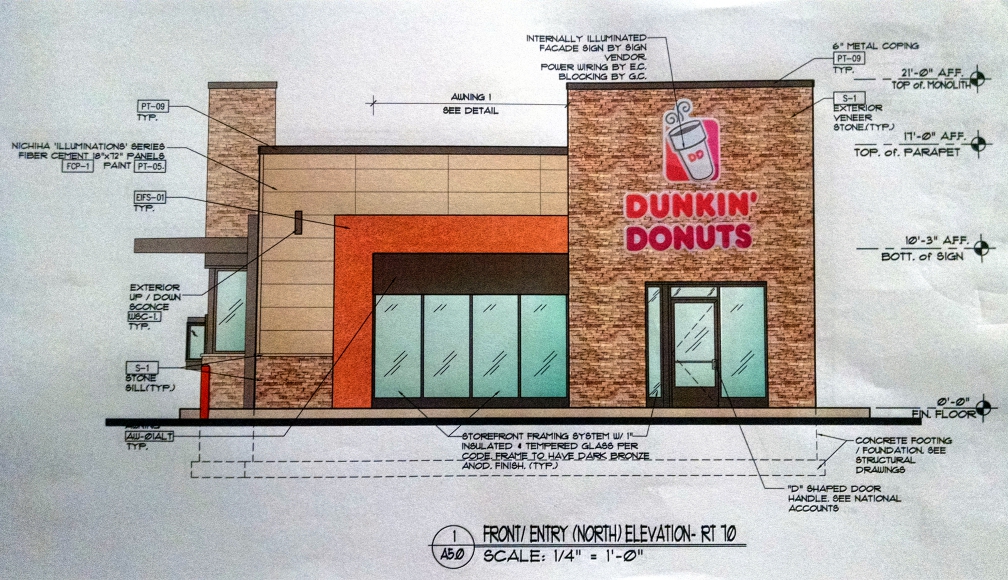 “You seem to have more questions than you have answers to now,” he said.

“I think this thing cries out for some additional workshopping or contemplation as to how to solve some of the problems and questions that we have.”

“We need to workshop it again,” she said. “I don’t know what the solution is. Maybe we need to look at the footprint of the building to make it more efficient. The orientation of Bayard’s is making it difficult for a drive-thru restaurant to operate in it.”

Rhoads said his clients were “happy to come back.”

After the meeting, Cherry Hill Community Development Director Paul Stridick suggested that “there could be remedies” for Cuneo in the time Lauer takes to revise the design of the site, but that the board had no specific authority to safeguard the future of the Flower Barn.

“That needs to be worked out between the new owner and the tenant,” Stridick said. “There’s other spaces they could move nearby.” He suggested there might be a possibility for Cuneo to move his business into the interior of Bayard’s, but Cuneo said he’d had a similar conversation with Glaser, to no avail.

“It’s an application in process,” Stridick said. “The prospective owners have met the existing tenant.”