Security concerns continued to roil the Cherry Hill school district Tuesday, as a wave of backlash over the suspension of a history teacher who talked about gun violence in class culminated in a student-led walkout.

In an effort to curtail disruption Monday morning, Cherry Hill High School East Principal Dennis Perry threatened seniors with losses of privileges from prom to the class trip, and corralled the group into the high-school auditorium.

After Tuesday’s demonstration, Perry issued a letter walking back those remarks.

“I am formally retracting the statement that I made on Monday, February 26, regarding withholding participation in the senior prom, the senior trip, or graduation for participating in the ‘disruption’ planned for that morning,” Perry wrote in a two-page letter posted on the high-school website.

“In an effort to move forward in a safe and productive manner, I am asking for the community to partner with the school as we continue to support our students through this impactful time,” the letter said.

Perry also outlined a handful of planned remedies intended to repair the breach between students and the administration, including:

Perry’s letter described having been motivated to secure the building out of fear for plans to “create as much disruption as possible,” which students have said was related to the placement of history teacher Timothy Locke on unpaid leave for in-class remarks about school shootings.

In classroom discussions, Locke was an outspoken critic of the school’s security measures, students said. Cherry Hill East senior Ari Nahum said his teacher spoke openly about how he was prepared to “take a bullet for all of his students.

“[Locke]  thinks the school isn’t safe enough and someone could easily walk in,” Nahum said. 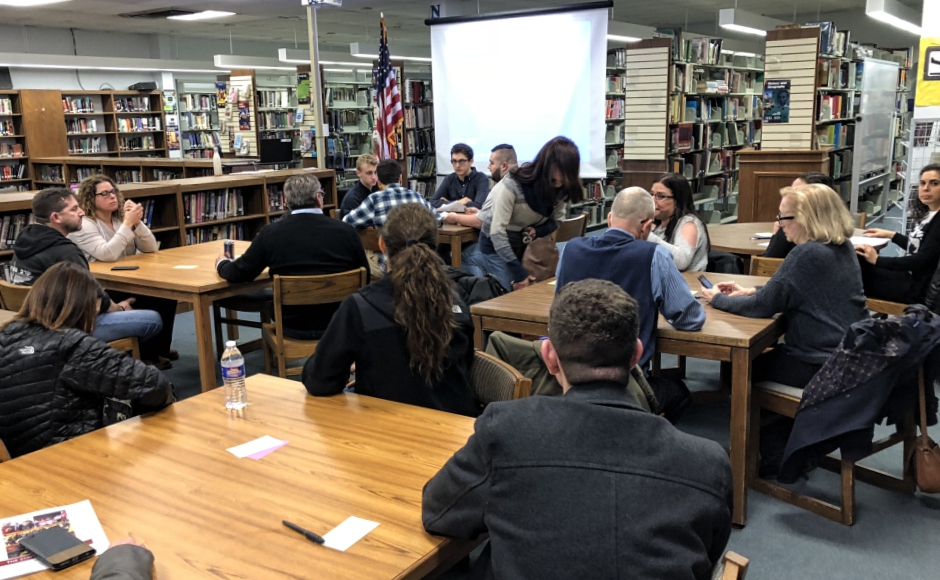 Those thoughts were echoed by parents who met with Cherry Hill Superintendent of Schools Joseph Meloche in a previously scheduled coffee-and-conversation event at Cherry Hill High School West Monday night.

Many questioned the design of the district security plan, and advocated for more spending on security, from metal detectors to armed police officers.

On Tuesday afternoon, Cherry Hill Mayor Chuck Cahn issued a statement on behalf of the township municipal government insisting that the district implement “a comprehensive plan” for security.

“This is an issue that requires immediate action,” Cahn wrote.

“While we cannot predict if and when our school’s security measures will be tested, as leaders, we must remain strong and united on this issue as we work together to develop ways to protect our children,” he wrote.

The statement further advocates for the posting of armed police officers on school premises “as part of any plan that is implemented,” per the recommendation of Cherry Hill Police Chief Bud Monaghan.

In a separate statement issued Tuesday, Meloche added that he encouraged students to seek available counseling as needed, and pointed to the district student assistance resources. He also urged the community to work with the district to minimize the security risks posed by walk-outs.

“I support students’ efforts to make their voices heard in a safe manner, and asked that the students instead conduct their demonstration inside the school in the interest of safety… Walk outs are a deviation to our school’s standard supervision and safety procedures. As a result, walk outs possess the potential of creating an unsafe situation for participants. Planning and providing for a collective and structured voice, while still maintaining a safe and structured learning environment, will be a component of the upcoming conversations.”