Trending
You are at:Home»People»Cleanups, Connections, Community on Martin Luther King Day of Service 2016

Throughout the region, volunteers cleaned up waterways, collected donations for neighbors in need, and rallied in celebration of their freedoms. 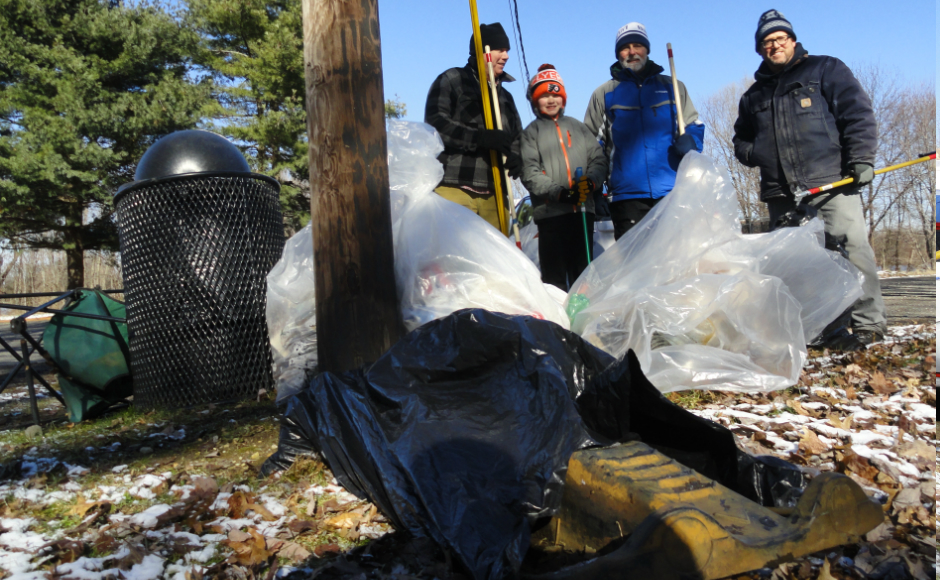 The most unusual thing Ean Steidle pulled out of the Cooper River on Monday morning?

“You just don’t realize how much trash is in the river,” said Ken Steidle, Ean’s dad. “Every type of trash imaginable.”

“So much of it is careless littering,” said Fred Stine of the Delaware River Keeper Network. “We have so much plastic in the waste stream. Garbage overflows trash cans, trash cans blow over on a windy day, stormwater carries garbage downstream, and it all ends up in the river.”

Stine led a cleanup at the banks of the waterway along South Park Boulevard in Haddon Township on Monday’s Martin Luther King, Jr. Day of Service. About 60 volunteers from various municipalities joined in the effort, including students from the high schools of Audubon, Cherry Hill West, Haddonfield, and Haddon Township, and scouts from Collingswood-Haddon Township Cub Scout Pack #179.

Their attendance was especially remarkable given the sub-freezing temperatures, Stine said. Together the group gathered 30 to 40 bags of garbage in three hours—and the riverbanks have no shortage of need, Ken Steidle said.

“It could sustain a clean-up every weekend,” he said.

The observation of Martin Luther King Day as a day of service helped create the opportunity to mobilize the effort, Stine said. In addition to doing the work, the Cooper River cleanup offers a platform for community education about how much trash people in the area generate, he said.

Ean Steidle hopes that message will reach people throughout the region.

“Everybody should really do their part,” he said. “Recycling plastic water bottles, refilling water bottles. Every little thing counts.” 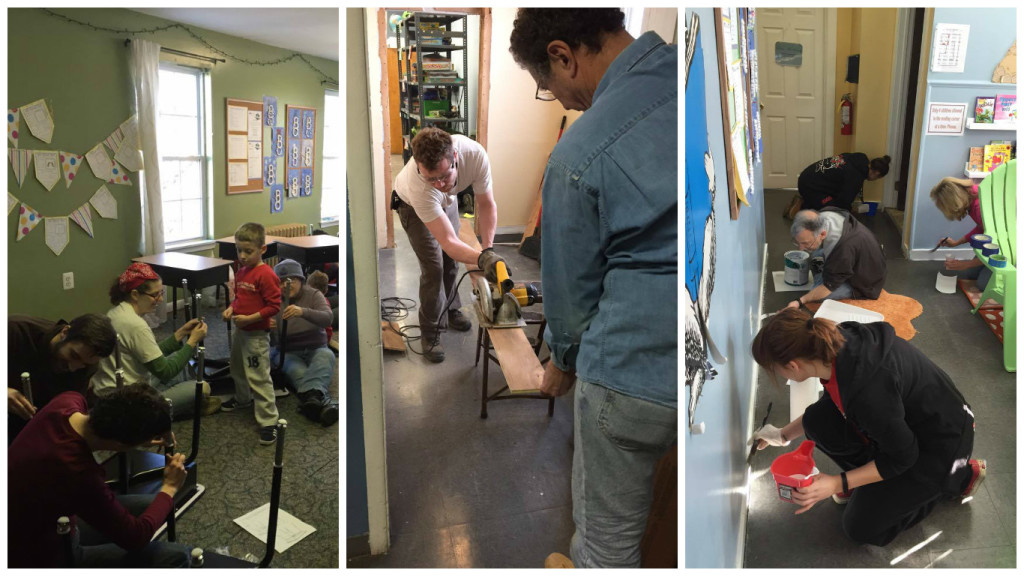 Although his church conducts outreach in a variety of forms throughout the year, participation numbers are higher on Martin Luther King Day because the theme of service is adopted nationally, Mitchell said.

Liberti leveraged those additional hands in providing facilities maintenance at the nonprofit Fellowship House of South Camden, which provides free summer camp and after-school programs for families in the city.

“For us, it’s a national day where people feel that this is a good day to serve, to honor Martin Luther King, Jr.,” Mitchell said. “We want to serve the community we live in.”

At the Oaklyn Baptist Church, Pastor Randy Van Osten led students from his Revolution Youth Ministry in assembling small bags of candy for Emerge, a group that conducts outreach to women working in the adult industry.

Women in the industry are “highly labeled,” and most have been sexually abused, said Emerge founder Kelly Master, whose nonprofit, Dining for Dignity, is heavily involved in battling sex trafficking. The expectations that come from working in the industry can leave lasting trauma. 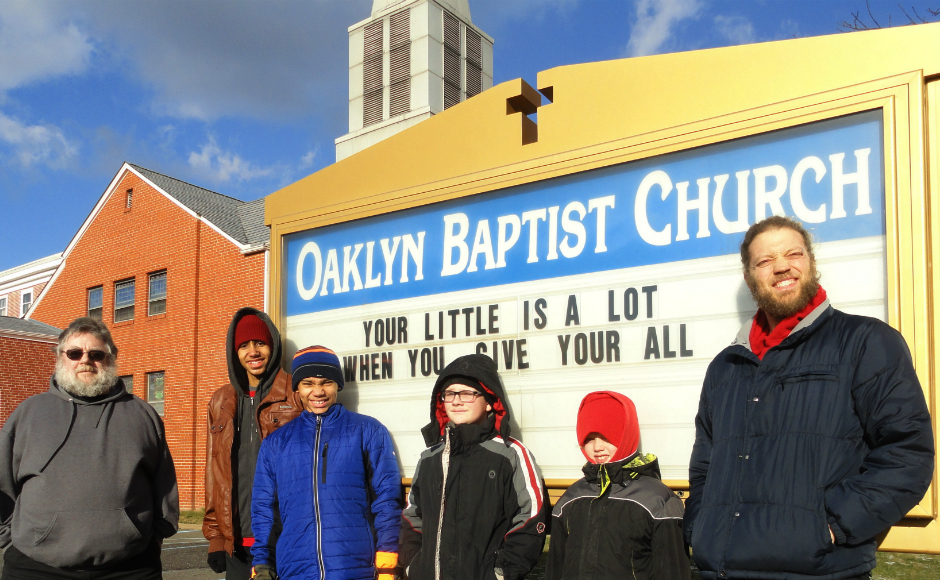 “Most of these girls don’t know their value,” she said. “[People often] just look at girls in the strip clubs as ‘they get what they deserve because they’re there.”

Instead, by reminding sex workers that they have innate dignity and worth as people, “we’re just trying to meet them right where they are,” she said.

Van Osten said he appreciates the Day of Service because it offers a lesson in behavior that the youth in his ministry can take with them for the rest of the year.

“I hope it’s something people can take with them and learn to do every day of their lives,” he said.

Around 3 p.m., 50 children who had participated in a day’s worth of arts and education activities at the nearby Studio Luloo in Oaklyn came marching up the White Horse Pike, bearing handmade signs that illustrated “the dreams they won’t give up on and the freedoms they believe in,” said Community Rocks! founder Sara O’Brien.

“The arts are the story of humanity,” O’Brien said. “When you’re doing hands-on activities, that’s how they learn.” 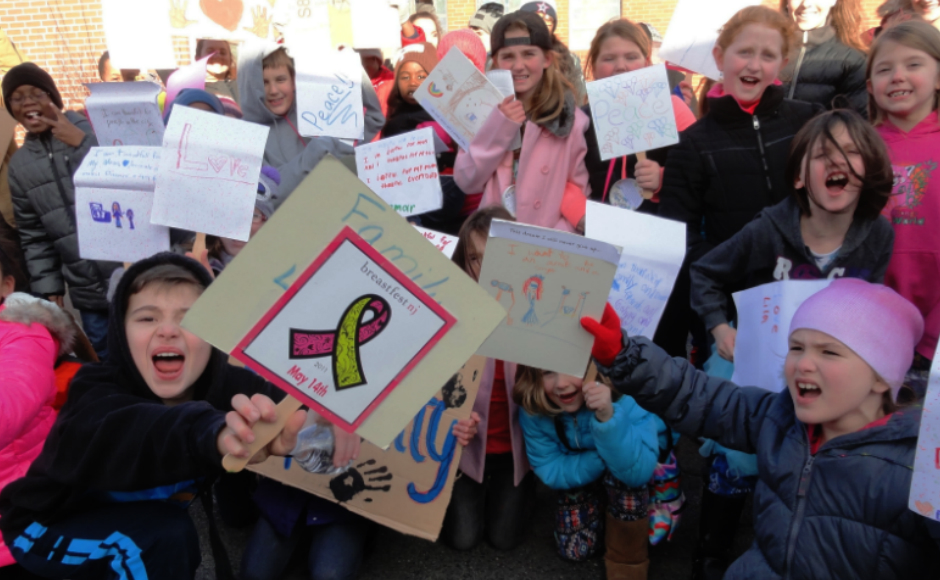 Throughout the day, Community Rocks! hosted a combination of activities based on themes of the American Civil Rights movement. Children read and discussed quotes from King, participated in exercise and dance classes, viewed King’s famous “I Have a Dream” speech, and packed 100 bags for the homeless, to be distributed by the Interfaith Homeless Outreach Council.

But the most inspirational part of the day, O’Brien said, was seeing children from many different communities and a variety of religious, ethnic, and economic backgrounds playing together without judgment or division.

“That’s living the dream,” the said. “It gives you hope for the world being a kind and peaceful place. If we can create it in this little corner of the world, we’re going to keep it going.”