Photographer Kevin Monko captured images of more than 300 households from his car during the COVID-19 pandemic. A book collecting those works launches with an exhibit at Perkins Center for the Arts on Saturday. 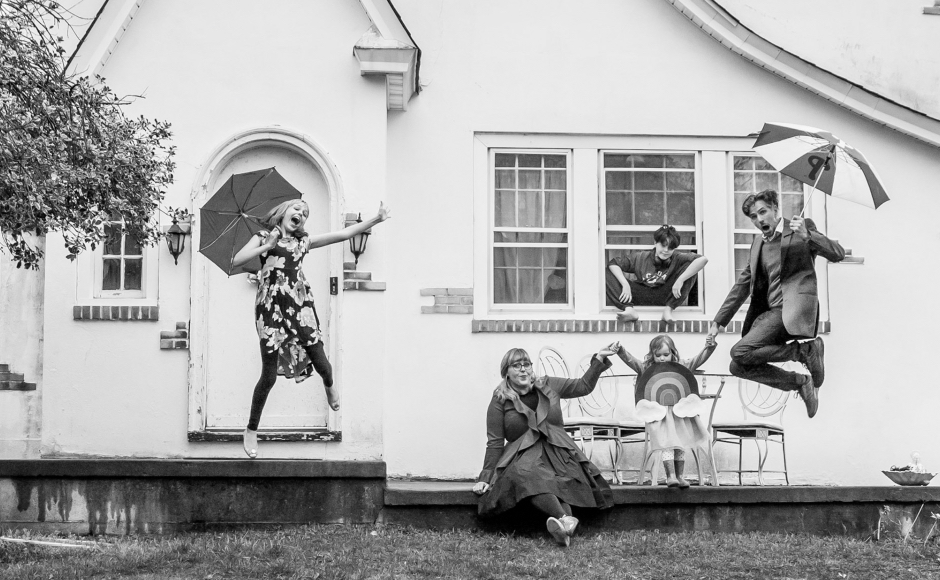 During the novel coronavirus (COVID-19) pandemic, Collingswood-based photographer Kevin Monko launched a project he called “Drive-By Porchraits,” a portmanteau of “porch” and “portrait,” whereby he took photos of homebound families from his vehicle.

Monko published a selection of those images in the book, Drive-By Porchraits: Photographing the Quaran-Times from My Car.

It launches with a reception at the Collingswood location of Perkins Center for the Arts from 5 to 8 p.m. Saturday, November 12.

We sat down with him to discuss the book, the project, and his experiences in both. The interview has been edited for clarity and length.

NJ PEN: The pandemic brought us a lot of porch pickups and drive-by social events. Yours was a little different from all of them, though. For those unfamiliar with your project, talk a little about its origins.

KEVIN MONKO: The project, in a nutshell, was, I want to take your picture. We’ll set up a time, you come to your porch, I’ll come to your house, and I won’t leave my vehicle.

People said stuff like, “I want to get a photograph of my family because I don’t know if we’re going to lose anyone.” Some people thought, “It’s something to do,” or, “We never really did a family photo, and we’re all here now.”

I was lucky that I had seized on this idea, and that it kept playing out in ways that I didn’t expect, like the community saying, “I just want to be part of that because I feel so disconnected from anything.” And it was a great feeling; I felt lucky to be at the hub of that.

NJ PEN: Home life during lockdown was definitely different for everybody. What was your experience like?

MONKO: I did a lot of what everyone else was doing. I was watching a lot of TV. We were playing board games. I was playing music and putting it online.

But there was something about this project. It gave me something to really look forward to every day. I’d be out for a couple hours every day at least.

I got to meet a lot of people while they were hunkering down because it was the real quaran-times. People felt connected to the community in a way that they were missing. 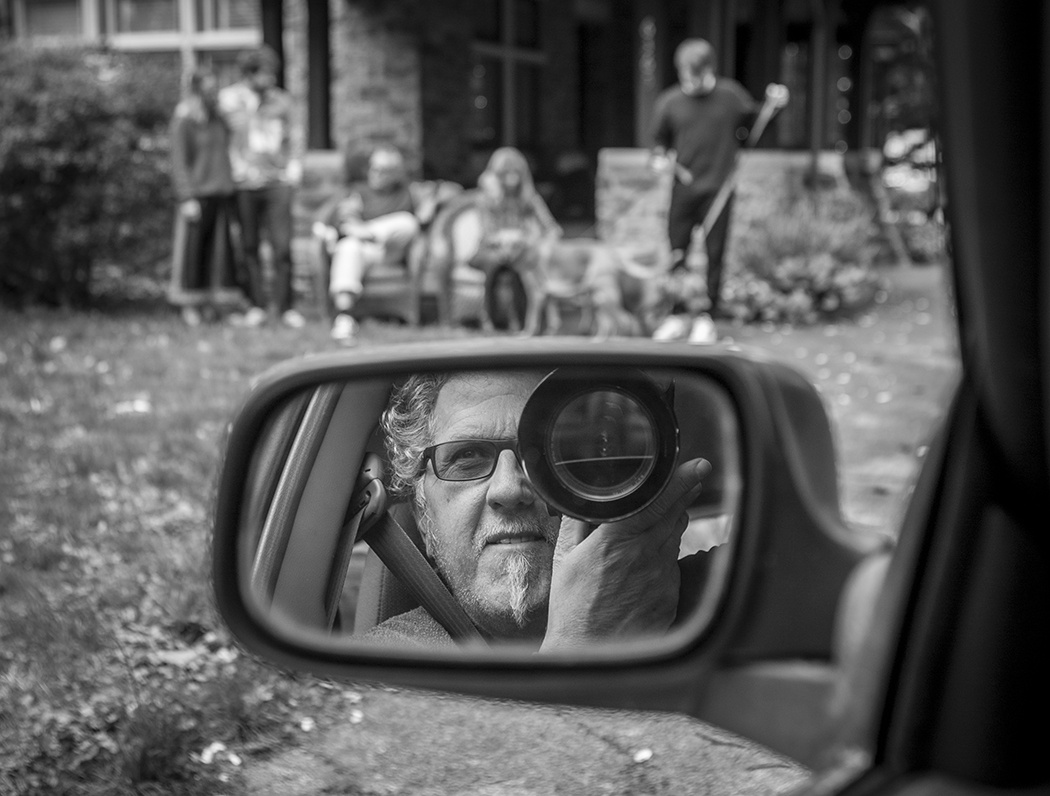 NJ PEN: We’re not far removed from the worst of the pandemic, but there are already people and pets in these photos in them who aren’t there anymore.

Was there any point at which you were thinking about the risks associated with interacting with a bunch of people for this project?

MONKO: Early in the pandemic, [my wife]. Linda lost her sister.

She died with COVID because her immune system was down, but they didn’t ever test her.

So I was acutely aware that this could really happen to people I care about.

NJ PEN: You also took all the photos for free.

MONKO: It was like, “Hey, if you want to contribute to the project, you can. If not, don’t worry about it.” People were generous; I got some money out of it.

Some people suggested I make a coffee table book; I actually reached out to some publishers about it. They loved the photos, they loved the project, but said this is the kind of book that people generally self-publish.

NJ PEN: You took them up on it—or, rather, you took yourself up on it.

MONKO: I got a fellowship from the New Jersey State Council on the Arts, and I decided to use the money to publish the book, do a bunch of prints in frames, and try to have a show.

Perkins Center for the Arts was willing to host it in their loft space. The Allie Nagle ReMax Team — they have been a major supporter of Porchfest, which we put together — they’re all about things that connect community. They gave me a sponsorship to help put the show on.

I don’t know what the market is for photo books in general, or prints of things. But there’s people who aren’t in the book who showed a lot of interest in it. I printed 250 books. If there’s enough demand, I’ll do another edition.

NJ PEN: You say you shot 325 households for the project. What was it like trying to compile all those photos for the book?

MONKO: I had help from designer Julie Colton, a colleague from when I worked at Kelsh Wilson Design.

It was hard picking photos. I want everybody to be featured, and that was the hardest part, because every one of them was as important to me as the rest, just the fact that they wanted to participate in the project.

I wanted to see people’s whole house in a lot of cases. That’s the place that’s protecting these people. But then I would photograph alternative shots, like a tight shot of the family, with a telephoto lens. And depending on the setting, some things were more difficult to photograph because I’m not getting out of my car.

But I enjoyed that little part of the puzzle, too – the fact that I’m not leaving my car. I enjoyed getting myself in awkward positions. As a photographer you’re moving by inches to get the right composition; that meant moving the car six inches forward, or then backing up. 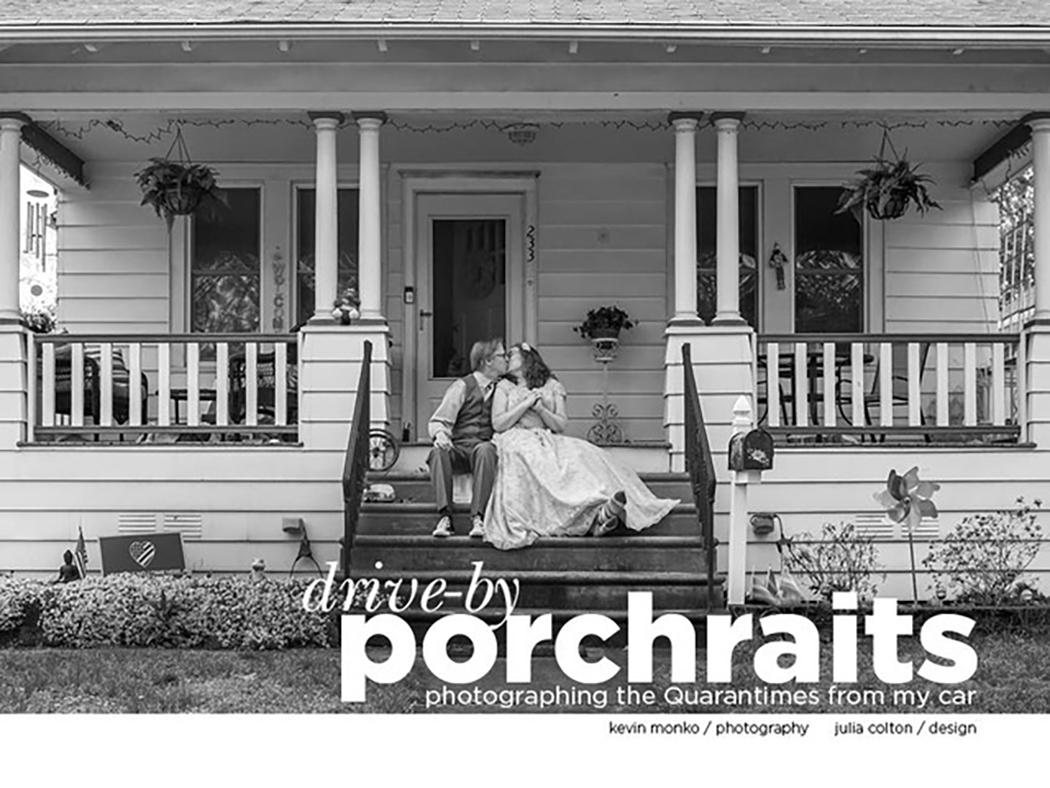 NJ PEN: How did it feel going back over the photos to curate the book and the exhibit? When you think about these times, and you see those photos, what comes to mind?

MONKO: I remember how lucky I felt to be able to do it. People really were connecting to my connection, just to the fact that I was out there doing it. I was like the messenger from the hinterlands or something.

Or people were weirdly getting to know their neighbors and community through the book. “I didn’t know who lived in that house,” or “I didn’t know they were a couple.” That was a weird aspect for me.

NJ PEN: Did you learn anything by doing this project?

MONKO: For one thing, I learned that I could follow through on a project of this magnitude, because it’s the kind of thing that I tend to put off. I’ll start a project and freeze on the best way to do it, and then I won’t get it done.

I do appreciate being able to do more community stuff and stuff that’s of service in a weird way. I’m going to make a few bucks, but it’s more important to me for people to get the thing; or, if I took a picture of you, that you can get it. I tried to get everybody in the book.

MONKO: I wrote an intro, and then there’s stuff that other people have written. I wanted to hear what people’s lives were like then, or what people reflected on deciding to get a photo taken. There’s some great responses in there. It’s like we’re looking at ourselves in a moment in history.

Kevin Monko’s Drive-By Porchraits: Photographing the Quaran-Times from My Car launches with a reception at the Collingswood location of Perkins Center for the Arts from 5 to 8 p.m. Saturday, November 12. Copies are $35 apiece, and 20 percent of all profits from sales of the book will be donated to the Camden County chapter of Habitat for Humanity.