Camden County has seen the greatest number of in-school COVID-19 transmissions of any county in the state. 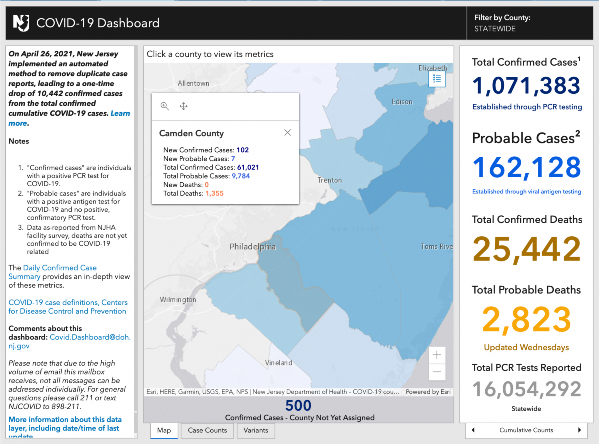 Sadly, seven more residents have perished from complications related to the virus, bringing the statewide, confirmed death toll to 25,442 lives lost during the pandemic.

In addition to those lab-confirmed fatalities, the state has acknowledged another 2,823 probable COVID-19-related deaths—four more than previously reported.

More than 16.054 million polymerase chain reaction (PCR) tests for COVID-19 have been performed statewide, with a 12.17-percent positivity rate per 100,000 residents.

The statewide average of COVID-19 spot positivity testing based on PCR test results stood at 4.77 percent November 18; in South Jersey, it was highest, at 5.41 percent.

Rt, the variable that describes the seven-day, rolling-average, statewide rate of transmission of new COVID-19 cases, rose to 1.23 on November 22.

An Rt figure of 1.0 means that each new COVID-19 patient is infecting than one other person, on average, and the spread of the virus is increasing.

COVID hospitalizations up, ICU/ventilator usage up 24 percent in the past week

Throughout New Jersey, 816 people currently are hospitalized with a suspected (48) or confirmed (768) case of COVID-19, the governor said, an uptick of nearly one-quarter over levels seen two weeks ago.

Among those hospitalized patients, 168 are in intensive or critical care, and 78 of the ICU and critical-care patients (46 percent) are on ventilators.

In New Jersey’s 71 critical care hospitals, 104 patients were hospitalized with COVID-19 yesterday, while 74 others were discharged.

“These numbers are being driven overwhelmingly by unvaccinated individuals,” Murphy said. “We know by now there is very little we can say up here to get them vaccinated, but for those of you who are vaccinated, this is another reason to get your booster.”

Across the state, long-term care (LTC) centers have reported 1,835 cumulative outbreaks of COVID-19, and 115 are dealing with an active outbreak. LTCs account for 57,441 infected patients and staff in New Jersey, or 5.7 percent of total cases.

That includes 34,114 residents and 23,327 staffers sickened by the virus, as well as 8,673 lab-confirmed resident and staff deaths (35 percent of the statewide confirmed total), with facilities self-reporting 145 staff deaths.

Of 631 veterans residing in three state-run homes, 456 residents have tested positive for COVID-19, and 158 have died from complications related to the virus. Three hundred veterans have recovered from the virus. No resident currently is COVID-19-positive.

The facilities at Menlo Park, Paramus, and Vineland are staffed by 1,372 workers, none of whom is presently COVID-19-positive. The facilities have sustained two staff deaths related to the virus.

At state-run psychiatric hospitals, 374 of 1,139 patients and 1,136 staff members have tested positive for COVID-19. Fourteen patients and eight staffers have died from complications related to the virus.

To date, 142 New Jersey children aged 1 to 18 have been diagnosed with pediatric multisystem inflammatory syndrome (MISC). Four of those cases were reported in Camden County, tied with Cumberland and Monmouth Counties for third-least in the state.

Since the start of the 2021-2022 school year, 179 reported outbreaks—three or more students or staff who contracted the virus within the school—have been logged, affecting 1,026 people, a mix of students and staff.

In Camden County, 23 COVID-19 outbreaks have accounted for the in-school infections of 187 people, which is the most of any county in the state, and more than the county had sustained in the entire prior school year.

Across New Jersey, 13.357 million COVID-19 inoculations have been administered.

Throughout New Jersey, 5.939 million people have been fully vaccinated in-state, having received either a one-shot formulation from Johnson and Johnson or both doses of the two-shot Pfizer or Moderna vaccines.

In Camden County, 721,787 doses have been administered, seventh-most in the state; 318,802 people have been fully vaccinated.

An estimated 515,825 vaccine doses have been administered to New Jersey residents outside of the state, of which 219,549 residents are estimated to have been fully vaccinated.

Last week, the U.S. Centers for Disease Control and Prevention (CDC) announced that all adults 18 years and older are immediately eligible for a COVID-19 vaccine booster dose. Those who received a Pfizer or Moderna formulation are recommended to get a booster six months after their second shot; those who received a Johnson and Johnson vaccine are eligible two months after. In New Jersey, some 4 million adults are booster-eligible. 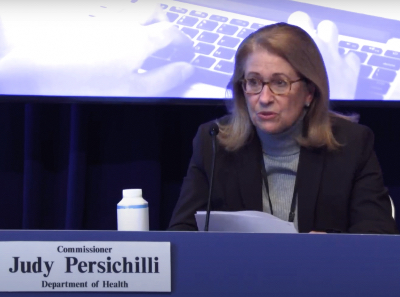 Since the start of the 2021-2022 school year, New Jersey has sustained 179 outbreaks related to in-school transmission—three or more students or staff who contracted the virus within the school—affecting 1,026 people, a mix of students and staff.

In Camden County, 23 COVID-19 outbreaks have accounted for the in-school infections of 187 people, which is the most of any county in the state, and more than the county had sustained in the entire prior school year.

Since the beginning of the school year, state health officials have been collecting data self-reported by individual schools; to date, some 60 percent of school districts and 40 percent of colleges and universities have reported data that show COVID-19 infections on the rise again.

According to New Jersey Health Commissioner Judy Persichilli, infection rates are higher among staff as compared with students. Case rates in kindergarten through 12th grade were highest in early October, and had begun to decline until the second week of November.

Similar trends followed in colleges and universities, where cases peaked in September and declined until the second week of November, when they began to increase, Persichilli said.

In the last reporting period, 85.2 percent of school staff are vaccinated, and 3.5 percent of students were excluded from school due to COVID-19 (either quarantining or recovering from illness).

Officials took those data to mean that the virus is following a similar seasonal trend to last year’s infections, and predict case rates will climb again as activities move indoors and families gather with unvaccinated individuals.

“This is never going to zero,” Murphy said. “This is with us. And we’re not going to manage it as if we have to see it going to zero before we do X or Y. The trends are turning out exactly as we said it would.”