Although the World Health Organization has added the new COVID-19 strain to its variants of concern watch list, officials say New Jersey is still dealing with the effects of the Delta variant for now. 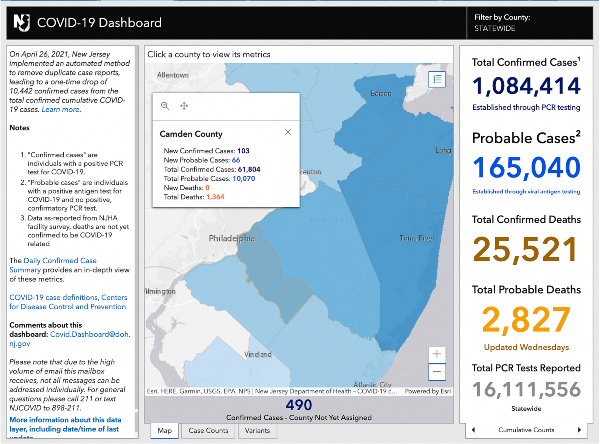 Sadly, five more residents have perished from complications related to the virus, bringing the statewide, confirmed death toll to 25,521 lives lost during the pandemic.

In addition to those lab-confirmed fatalities, the state has acknowledged another 2,827 probable COVID-19-related deaths—four more than previously reported.

More than 16.111 million polymerase chain reaction (PCR) tests for COVID-19 have been performed statewide, with a 12.31-percent positivity rate per 100,000 residents.

The statewide average of COVID-19 spot positivity testing based on PCR test results stood at 9.23 percent November 25; in South Jersey, it was highest, at 8.57 percent.

Rt, the variable that describes the seven-day, rolling-average, statewide rate of transmission of new COVID-19 cases, rose to 1.18 on November 22.

An Rt figure of 1.0 means that each new COVID-19 patient is infecting than one other person, on average, and the spread of the virus is increasing.

COVID hospitalizations up, ICU/ventilator usage up

Throughout New Jersey, 950 people currently are hospitalized with a suspected (44) or confirmed (906) case of COVID-19, Murphy said.

That’s the most in the past seven weeks, but still less than a third of the population who were hospitalized across New Jersey last year at this time, the governor pointed out.

Among those hospitalized patients, 193 are in intensive or critical care, and 99 of the ICU and critical-care patients (46 percent) are on ventilators.

In New Jersey’s 71 critical care hospitals, 143 patients were hospitalized with COVID-19 yesterday, while 88 others were discharged.

Across the state, long-term care (LTC) centers have reported 1,852 cumulative outbreaks of COVID-19, and 123 are dealing with an active outbreak. LTCs account for 57,588 infected patients and staff in New Jersey, or 5.7 percent of total cases.

That includes 34,193 residents and 23,395 staffers sickened by the virus, as well as 8,694 lab-confirmed resident and staff deaths (35 percent of the statewide confirmed total), with facilities self-reporting 145 staff deaths.

Of 631 veterans residing in three state-run homes, 456 residents have tested positive for COVID-19, and 158 have died from complications related to the virus. Three hundred veterans have recovered from the virus. No resident currently is COVID-19-positive.

The facilities at Menlo Park, Paramus, and Vineland are staffed by 1,372 workers, none of whom is presently COVID-19-positive. The facilities have sustained two staff deaths related to the virus.

At state-run psychiatric hospitals, 374 of 1,139 patients and 1,136 staff members have tested positive for COVID-19. Fourteen patients and eight staffers have died from complications related to the virus.

To date, 149 New Jersey children aged 1 to 18 have been diagnosed with pediatric multisystem inflammatory syndrome (MISC)—seven more than previously reported, and six of which occurred earlier during the year and were identified through a data reconciliation . Four of those cases were reported in Camden County, tied with Cumberland and Monmouth Counties for third-least in the state.

Since the start of the 2021-2022 school year, 194 reported outbreaks—three or more students or staff who contracted the virus within the school—have been logged, affecting 1,085 people, a mix of students and staff.

In Camden County, 23 COVID-19 outbreaks have accounted for the in-school infections of 192 people, which is the most of any county in the state, and more than the county had sustained in the entire prior school year.

Across New Jersey, 13.605 million COVID-19 inoculations have been administered.

Throughout New Jersey, 5.956 million people have been fully vaccinated in-state, having received either a one-shot formulation from Johnson and Johnson or both doses of the two-shot Pfizer or Moderna vaccines.

In Camden County, 734,210 doses have been administered, seventh-most in the state; 319,436 people have been fully vaccinated.

An estimated 512,282 vaccine doses have been administered to New Jersey residents outside of the state, of which 220,474 residents are estimated to have been fully vaccinated. 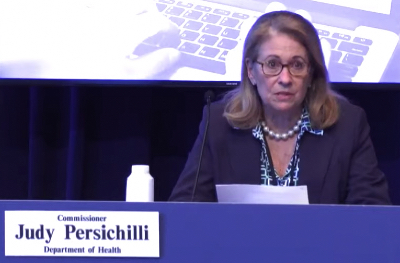 New variant B.1.1.529 ‘Omicron’ not in US yet, but health officials monitoring

On November 26, the World Health Organization (WHO) announced that it had designated new COVID-19 variant B.1.1.529 “Omicron” as a variant of concern.

First identified in South Africa, little is known about Omicron yet, with the exception that it is identifiable via the same processes by which other COVID-19 variants have been identified, including genetic sequencing and PCR testing.

However, studies are underway “to evaluate the transmissibility, the severity, and reinfection risk of the variant,” New Jersey Health Commissioner Judy Persichilli said.

New Jersey State Epidemiologist Dr. Christina Tan said that new COVID-19 variants “will always be happening,” adding that the way to minimize the increase in mutations and the emergence of others “is to get vaccinated.”

To date, health officials do not know whether the Omicron variant is the product of new mutations in “areas that might impact immune response, vaccine efficacy, [or]transmissibility,” Tan said.

“All of that’s theoretical right now, and only time will tell,” she said.

In the meantime, Persichilli urged New Jerseyans “to be really proactive about controlling what we do know, which is the Delta variant,” which has comprised nearly all cases in New Jersey since last summer.

“Just because there’s a new variant out there does not mean Delta has lost any of its transmissibility or its virulence,” Murphy said. “Our numbers are still being fueled by Delta. The importance of preventing any further spread of Delta, or, we hope, to prevent Omicron from gaining a foothold is tantamount.

“We strongly encourage everyone to keep masking up when you’re indoors, when distancing is not possible, and especially when you’re with people whose vaccination status is not clear,” he said.

“Get vaccinated and get boosted.”

Persichilli reported Monday that just 29 percent of those eligible for a booster dose in New Jersey have received one. She urged residents to receive their boosters now to ward off health concerns during the upcoming holiday season.

Health officials are still bracing for an anticipated spike in COVID-19 cases following the holidays, and Murphy cautioned that New Jerseyans must be ready for the possibility of an uptick in cases from any new variant, “as our region is a hub of international travel and commerce.

“We don’t know a lot of the answers yet,” Murphy said, adding later that, “on something like this, I worry about downplaying rather than overplaying it.”