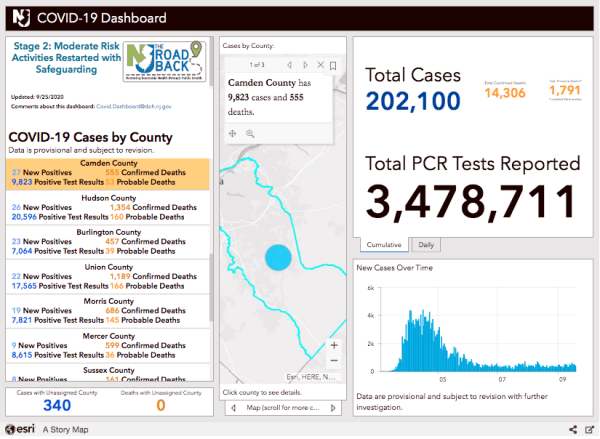 That total excludes 88 previously reported positive test results, which Murphy said were removed from the count because they were duplicate results or those of out-of-state residents.

Nonetheless, the high number of new cases “is clear evidence that we are not out of the woods,” Murphy said.

He cited Bergen, Gloucester, Ocean, Middlesex, and Monmouth Counties as particular areas of concern for their recently observed increases.

Sadly, seven more residents have perished from complications related to the virus, bringing the statewide death toll to 14,306 lives lost during the pandemic. All seven deaths occurred between September 14 and 23, the governor said.

In addition to those lab-confirmed fatalities, the state has acknowledged another 1,791 probable COVID-19-related deaths.

More than 3 million people have been tested for the virus statewide, with a 2.28-percent positivity rate per 100,000 residents.

The statewide average of COVID-19 spot positivity testing stood at 2.20 percent September 21; in South Jersey, it was higher, at 2.37 percent.

Rt, the variable that describes the seven-day, rolling-average rate of transmission of new COVID-19 cases, hit 1.15 from samples taken September 23.

Since its mid-April COVID-19 spike, the highest reported RT in New Jersey was 1.48, recorded August 1. The lowest was 0.62, recorded June 9.

Long-term care accounts for half of all deaths, a fifth of those infected

Throughout New Jersey, 405 people currently are hospitalized with a case of COVID-19: 233 have tested positive for COVID-19, and 172 are awaiting confirmation of their symptoms.

Among those hospitalized patients, 75 are in intensive or critical care, and 32 of the ICU and critical-care patients (43 percent) are on ventilators, a slight uptick from the prior two weeks, said New Jersey Health Commissioner Judy Persichilli.

Across the state, 716 long-term care (LTC) centers have reported at least one case of COVID-19, and 159 are dealing with an active outbreak. LTCs account for 38,684 infected patients and staff in New Jersey, or 20 percent of total cases.

That includes 25,104 residents and 13,580 staffers sickened by the virus, as well as 7,156 lab-confirmed resident and staff deaths (50 percent of the statewide total), with facilities self-reporting 121 staff deaths.

Of 656 veterans residing in a state-run home, 389 residents have tested positive for COVID-19, and 146 have died from complications related to the virus. Five veterans presently are hospitalized with COVID-19, and 243 have recovered from the virus.

At state-run psychiatric facilities, 214 of 1,178 patients and 523 staff members have tested positive for COVID-19. Thirteen patients and seven staffers have died from complications related to the virus. 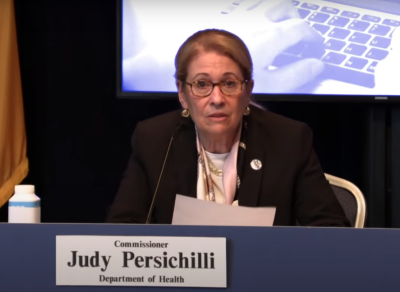 Pandemic ‘has exacerbated inequities in our state,’ Persichilli says

Racial and ethnic minorities have been disproportionately affected by the COVID-19 pandemic both nationally and in New Jersey, Persichilli said Friday.

“The same longstanding inequities that have contributed to health disparities affecting racial and ethnic groups have also put them at peril for COVID-19,” the commissioner said.

Citing a disproportionate representation of racial and ethnic minorities among essential workers and those unable to work from home, Persichilli said non-whites also face greater barriers to health care when necessary, including a lack of access to a doctor, a lack of insurance coverage, or a lack of paid sick leave at work.

A CDC study of pandemic mortality rates among young people revealed that although Hispanic, Black, and native Americans make up 41 percent of the U.S. population under 21, they account for approximately 75 percent of the COVID-related deaths in that age group.

In New Jersey, Latino men had the highest mortality rates of any ethnic group younger than 21, Persichilli said, and Hispanics are more likely to die younger from COVID-19 complications than are their white and Asian counterparts.

As a population, Hispanic people suffer greater instances of chronic conditions like asthma and obesity, and those underlying conditions could contribute to the high number of fatalities observed, the commissioner said. For those reasons and others, the department is working to make inroads in Spanish-speaking communities in the state.

“Eliminating health disparities among New Jerseyans is an overarching goal of the Department of Health,” Persichilli said. “The COVID-19 pandemic has exacerbated inequities in our state, and we have a lot of work ahead of us to improve outcomes for all communities of color.” 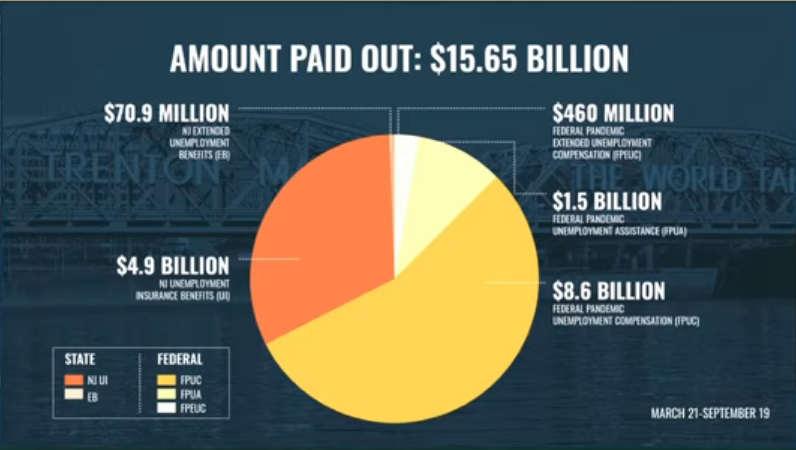 Since the beginning of the pandemic, the department has cleared 1.394 million New Jerseyans to receive benefits, and 96 percent of those who filed got at least one payment. In total, New Jersey has distributed $15.65 billion in state and federal benefits to its residents.

Additionally, Murphy said New Jersey’s participation in the FEMA Lost Wages Supplemental Assistance program has been approved, which means an additional $300 per week for six weeks for eligible residents. Payments are expected to be distributed in one lump sum starting next month.

New Jersey has added another nine contact tracers to its statewide service, bringing the total to 1,873. In the past week, the governor said that two-thirds of those people called by a contact tracer answered the phone, and 55 percent of new cases were contacted within the first 24 hours. However, a majority of those reached by a contact tracer (58 percent) still declined to provide additional contact information upon request.