Community spread of the virus remains a persistent, statewide concern, as does acquiring supplies of vaccine doses sufficient to inoculate the number of residents who are signed up to receive them. 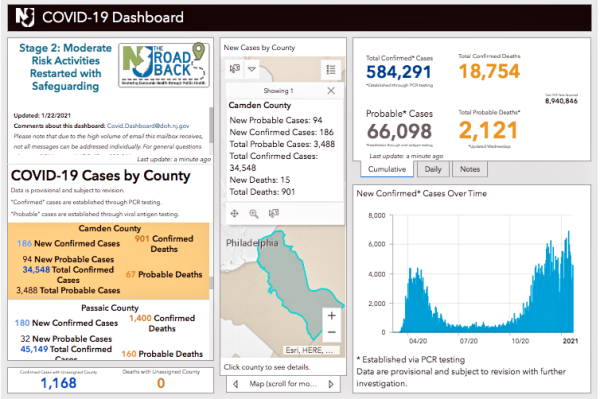 Sadly, 118 more residents have perished from complications related to the virus, bringing the statewide, confirmed death toll to 18,754 lives lost during the pandemic.

In addition to those lab-confirmed fatalities, the state has acknowledged another 2,121 probable COVID-19-related deaths, 30 more than previously reported.

More than 8.9 million polymerase chain reaction (PCR) tests for COVID-19 have been performed statewide, with a 6.60-percent positivity rate per 100,000 residents.

Rate of transmission (Rt) down to 1.04, spot positivity highest in South Jersey

The statewide average of COVID-19 spot positivity testing based on PCR test results stood at 10.1 percent January 18; in South Jersey, it was slightly higher, at 10.75 percent.

Rt, the variable that describes the seven-day, rolling-average, statewide rate of transmission of new COVID-19 cases, fell to 1.04 from samples taken January 20.

Since its mid-April COVID-19 spike, the highest reported RT in New Jersey was 1.48, recorded August 1. The lowest was 0.62, recorded June 9.

Among those hospitalized patients, 638 are in intensive or critical care, and 445 of the ICU and critical-care patients (70 percent) are on ventilators.

In New Jersey’s 71 critical care hospitals, 401 patients were hospitalized with COVID-19 yesterday, while 456 others were discharged.

Across the state, long-term care (LTC) centers have reported 1,207 cumulative outbreaks of COVID-19, and 427 are dealing with an active outbreak. LTCs account for 52,574 infected patients and staff in New Jersey, or nine percent of total cases.

That includes 31,670 residents and 20,904 staffers sickened by the virus, as well as 7,698 lab-confirmed resident and staff deaths (42 percent of the statewide confirmed total), with facilities self-reporting 140 staff deaths.

Of 656 veterans residing in three state-run homes, 434 residents have tested positive for COVID-19, and 155 have died from complications related to the virus — one more than previously reported, according to New Jersey Health Commissioner Judy Persichilli.

Five veterans presently are hospitalized with COVID-19, and 290 have recovered from the virus.

At state-run psychiatric facilities, 326 of 1,141 patients and 808 staff members have tested positive for COVID-19. Fourteen patients and seven staffers have died from complications related to the virus.

Since August 1, 121 COVID-19 outbreaks encompassing 597 individual cases have been traced to schools in 19 New Jersey counties. In Camden County, 13 outbreaks have been linked to 66 cases, second-most in the state.

To date, 1,262 vaccine clinics have been scheduled for residents and staff at LTC centers throughout the state, Persichilli said. 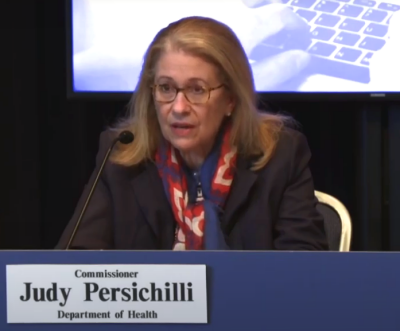 In addition to observing continued community spread of COVID-19 across New Jersey, Persichilli confirmed that the state has logged two cases of the COVID-19 B117 variant cases in NJ.

First observed in Great Britain, the variant is more transmissible than its predecessors but no more deadly than them, according to the U.S. Centers for Disease Control (CDC).

“Currently, there is no known difference in clinical outcomes associated with the described SARS-CoV-2 variants; however, a higher rate of transmission will lead to more cases, increasing the number of persons overall who need clinical care, exacerbating the burden on an already strained health care system, and resulting in more deaths,” the CDC briefing notes.

The first case in New Jersey was an Ocean County man in his 60s “with no travel history or a clear exposure to others who were ill,” Persichilli said.

His symptoms were first observed December 29, and after completing a PCR test on January 26, “it was confirmed by genetic sequencing at a second lab” that the man had contracted the B.1.1.7 variant. The patient’s symptoms resolved without hospitalization, she said.

The second variant case was observed “in a young traveler staying in Northern New Jersey,” who tested positive for COVID-19 in New York City January 11, Persichilli said. Prior to the diagnosis, the child was asymptomatic, she said.

“As you know, viruses constantly change through mutation, and new variants of a virus are expected to occur over time,” Persichili said.

“While the [B.1.1.7]  variant may spread more easily and more quickly than previous strains, at this time, there is no evidence that infections by this variant cause more severe disease according to the CDC,” she said.

“It is also reported that the current vaccines are effective against the variant,” Persichilli said. 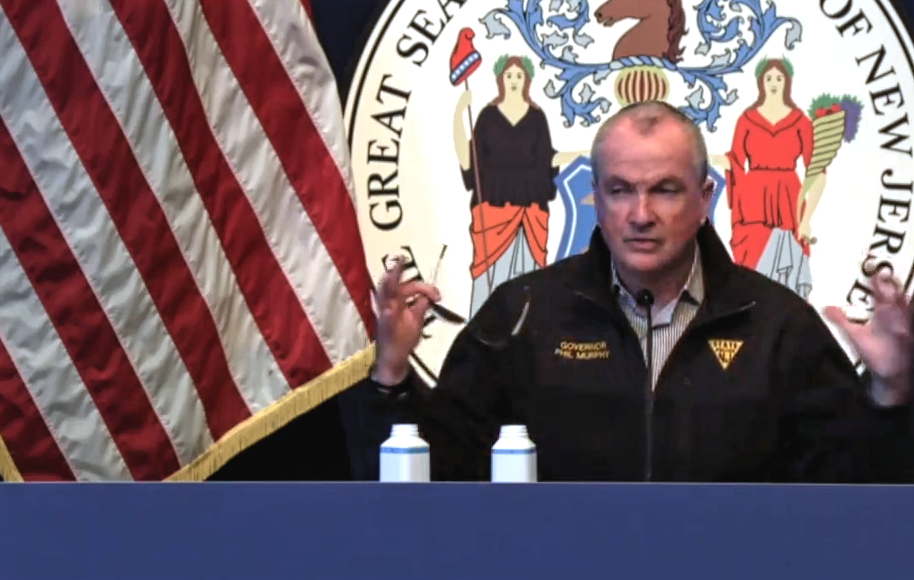 Murphy: vaccines meet ‘a huge supply-demand imbalance in every aspect’

By the time of his Friday briefing, Murphy touted the vaccination of the 500,000th New Jersey resident from COVID-19 (as of 9 a.m. that day, the state COVID-19 dashboard had New Jersey at some 10,000 vaccinations shy of the half-million mark).

But the governor also faced several questions about the distribution of the inoculations across a variety of interest groups.

Calling the national vaccine rollout “one of the single biggest logistical challenges in American history,” he described the issues New Jersey faces as “a huge supply-demand imbalance in every aspect.

“Our goal is to ensure that every New Jerseyan who raises their hand to get vaccinated gets vaccinated,” Murphy said.

The state has opened six vaccination “mega-sites” at counties across North, Central, and South Jersey as well as 130 community-based sites. At those locations, the governor said, healthcare workers have been able to distribute “50 to 70 percent” of available doses to those in the 1A and some of the 1B categories in its phased rollout plan.

However, “only a little more than 10 percent” of the doses set aside for staff and residents of long-term care facilities in New Jersey have been distributed to those expecting them, Murphy said. Those LTC doses are administered through a federal partnership with CVS and Walgreens pharmacies, and state officials can only urge them to move faster to schedule those vaccinations.

To support seniors, who are a patient priority group, in registering for their immunizations, New Jersey is opening up a staffed hotline Monday morning: 855-568-0545.

Of the first 750,000 doses that New Jersey will receive, 450,000 have been reserved for those LTC populations, Persichilli said; in a month of vaccinations, only 65,583 LTC residents and staff have gotten them thus far.

“We do not control these vaccines,” she said; “CVS and Walgreens do.

“Because we are committed to setting aside such a large number of first doses to those of highest risk, it has further limited our supply of doses that we can send elsewhere,” the commissioner concluded.

Despite those supply issues, the governor assured residents that those patients scheduling their second doses of the two-shot Moderna or Pfizer vaccines “should not be in competition” with those seeking their initial shots.

Persichilli also noted that although “some wastage is inevitable,” officials are observing “well under 1-percent” of product lost to damaged or misplaced vaccine doses.

“There’s an extraordinary supply-demand imbalance,” Murphy said. “It will go away; it will cure itself, but it will take time.” 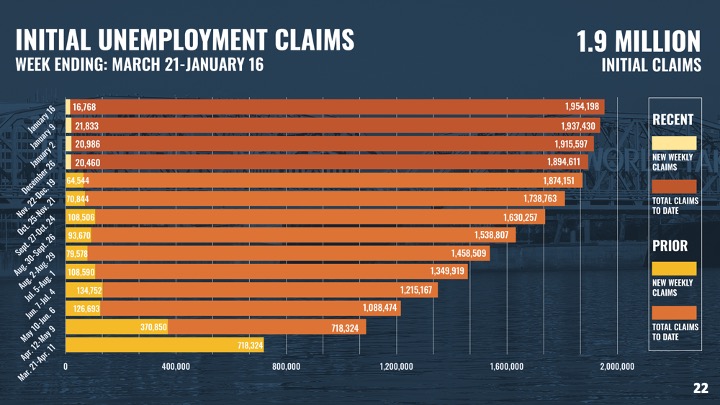 Finally, Murphy reported that another 16,768 New Jersey workers filed initial unemployment claims last week, which is down by 5,000 from levels the week prior.

To date, 1.954 million workers have filed for unemployment in New Jersey since the pandemic onset.

Of them, 533,000 workers who are eligible for $300 in weekly federal unemployment benefits have received that first round of payments.

Claimants eligible for both of the first two weeks of payments authorized under the Trump administration have received them in a lump sum, Murphy said.