Plus: encouraging metrics—lower rate of transmission, fewer hospitalizations, increasing vaccination rates—stand against a backdrop of increasing cases of variants of concern. 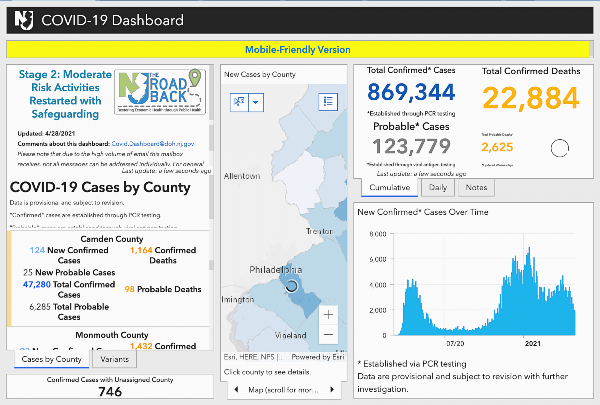 Sadly, 35 more residents have perished from complications related to the virus, bringing the statewide, confirmed death toll to 22,884 lives lost during the pandemic.

In addition to those lab-confirmed fatalities, the state has acknowledged another 2,625 probable COVID-19-related deaths—14 more than previously reported.

More than 13.250 million polymerase chain reaction (PCR) tests for COVID-19 have been performed statewide, with an 9.868-percent positivity rate per 100,000 residents.

The statewide average of COVID-19 spot positivity testing based on PCR test results stood at 8.99 percent April 24; in South Jersey, it was highest, at 9.17 percent.

Rt, the variable that describes the seven-day, rolling-average, statewide rate of transmission of new COVID-19 cases, hit 0.80 on April 26.

Among those hospitalized patients, 375 are in intensive or critical care, and 232 of the ICU and critical-care patients (62 percent) are on ventilators.

In New Jersey’s 71 critical care hospitals, 188 patients were hospitalized with COVID-19 yesterday, while 214 others were discharged.

Across the state, long-term care (LTC) centers have reported 1,417 cumulative outbreaks of COVID-19, and 223 are dealing with an active outbreak. LTCs account for 54,798 infected patients and staff in New Jersey, or 6.3 percent of total cases.

That includes 32,772 residents and 22,026 staffers sickened by the virus, as well as 8,027 lab-confirmed resident and staff deaths (35 percent of the statewide confirmed total), with facilities self-reporting 286 staff deaths.

A new report from the U.S. Centers for Disease Control (CDC) underscored the necessity for LTC staffers to be vaccinated as well as LTC patients, said New Jersey Health Commissioner Judy Persichilli.

“In New Jersey, we must increase our vaccination rates among our long-term staff,” Persichilli said. “While we have seen some progress, only about 56 percent of long-term care and assisted living staff are vaccinated.” 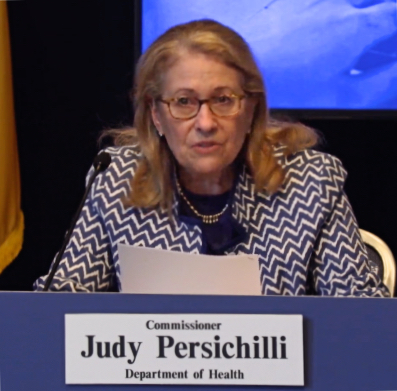 The health commissioner blamed some of the vaccine hesitancy reported on cultural apprehension among LTC staffers of color and online vaccine misinformation reports among younger LTC staffers.

“I think we will get those percentages up,” she said. “I think it’s imperative that we do.”

Murphy urged residents with friends and family members in long-term care settings to turn up the pressure on facilities to get more of their staffers vaccinated.

“Ask that facility what are they doing to get that staff vaccinated,” he said.

“What’s the plan? We can keep hitting them through the Department of Health or through our offices, but again, if it’s your loved one in there, raise the question.

“We know that the vaccination take-up of residents has been overwhelmingly high… but the staff is lagging,” the governor said.

Presently, no veterans are hospitalized with COVID-19; 300 have recovered from the virus.

To date, 115 New Jersey children aged 1 to 18 have been diagnosed with pediatric multisystem inflammatory syndrome (MISC). Four of those cases were reported in Camden County, tied with Cumberland and Monmouth Counties for third-least in the state.

Across New Jersey, 6.834 million COVID-19 inoculations have been administered, and 4.167 million people have received at least one vaccine dose.

Throughout the state, 2.915 million people are fully vaccinated, having received either a one-shot formulation from Johnson and Johnson or both doses of the two-shot Pfizer or Moderna vaccines. In Camden County, 388,932 doses have been administered; seventh-most in the state.

The first vaccines in the state were administered December 15, 2020; by February 8—55 days later—New Jersey had immunized its millionth resident. Twenty days thereafter, that count hit 2 million, and 3 million within two more weeks. On March 29, New Jersey crossed the 4-million-dose threshold, and the state cleared 5 million doses over the weekend of April 10, 2021. Eight days after that, New Jersey hit the 6-million-dose mark.

On Monday, Persichilli said that 91 percent of New Jerseyans taking a two-dose vaccine series have returned for their second dose, a figure that ramps up to 93 percent after six weeks, which exceeds a national average of 88 percent, according to the U.S. Centers for Disease Control (CDC).

People may miss their second appointments for any number of reasons, Persichilli said, including having died, been hospitalized, or moved out-of-state. She also acknowledged the reality of “vaccine hesitancy,” and encouraged people “to seek out guidance from their healthcare professional” if they have lingering questions about the inoculation.

Mutated offshoots of COVID-19, or “variants of concern,” continue to circulate throughout New Jersey; the state has traced 2,959 such cases to date.

In addition to commonly reported data points, New Jersey health officials are tracking COVID-19 outlier statistics, including the number of residents who’ve suffered repeat infections of the virus, and those who constitute “breakthrough” cases; i.e., those who test positive for the virus at least two weeks after having been completely vaccinated. Despite citing the complications in calculating these data, Lifshitz has promised to report back on them.

Today the New Jersey Department of Health (NJDOH) issued guidance for New Jersey summer day and sleep-away camps, which the Murphy administration has greenlit for the upcoming season.

According to the guidance, as reviewed by Persichilli, camps are strongly encouraged to formulate a policy for the daily screening of staff, campers, and visitors, as well as conducting the bulk of activities outdoors. Staffers and campers should be cohorted in small groups, with staggered arrival, drop-off, and mealtimes, to minimize exposure risk.

HVAC inspections, sanitization, and indoor masking should be maintained throughout the summer. Campers are not required to mask in their bunk or within their assigned cohort, but are expected to mask in other conditions, including when outside and within six feet.

“As an additional safeguard, we will be requiring that unvaccinated campers and staff receive a COVID test before the camp begins and within the first few days of their session,” Murphy said.