New Jersey has also crossed the threshold of more than 23,000 confirmed deaths related to complications from COVID-19. 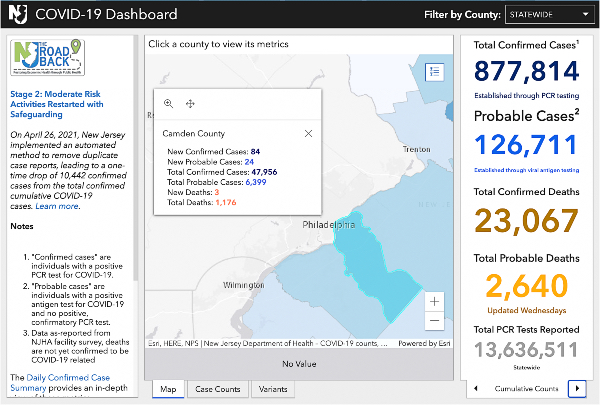 The majority of these results are a result of delayed reporting; 1,402 specimens were collected two weeks ago, and the bulk of those were from Bergen County, said State Epidemiologist Dr. Christina Tan.

Sadly, 34 more residents have perished from complications related to the virus, bringing the statewide, confirmed death toll to 23,067 lives lost during the pandemic.

In addition to those lab-confirmed fatalities, the state has acknowledged another 2,640 probable COVID-19-related deaths—15 more than had been previously reported.

More than 13.636 million polymerase chain reaction (PCR) tests for COVID-19 have been performed statewide, with an 9.974-percent positivity rate per 100,000 residents.

The statewide average of COVID-19 spot positivity testing based on PCR test results stood at 6.87 percent May 1; in South Jersey, it was highest, at 7.62 percent.

Rt, the variable that describes the seven-day, rolling-average, statewide rate of transmission of new COVID-19 cases, hit 0.34 May 3, an eight-month low.

Among those hospitalized patients, 314 are in intensive or critical care, and 196 of the ICU and critical-care patients (62 percent) are on ventilators.

On Monday, New Jersey Health Commissioner Judy Persichilli noted that the state’s hospital metrics are at lows unseen since June 2020, after the initial wave of the virus had subsided across the state.

In New Jersey’s 71 critical care hospitals, 149 patients were hospitalized with COVID-19 yesterday, while 186 others were discharged.

Across the state, long-term care (LTC) centers have reported 1,432 cumulative outbreaks of COVID-19, and 215 are dealing with an active outbreak. LTCs account for 54,954 infected patients and staff in New Jersey, or 6.2 percent of total cases.

That includes 32,840 residents and 22,114 staffers sickened by the virus, as well as 8,031 lab-confirmed resident and staff deaths (35 percent of the statewide confirmed total), with facilities self-reporting 144 staff deaths.

Of 613 veterans residing in three state-run homes, 456 residents have tested positive for COVID-19, and 156 have died from complications related to the virus. Three hundred veterans have recovered from the virus.

The facilities at Menlo Park, Paramus, and Vineland are staffed by 1,344 workers, five of whom are presently COVID-19-positive. The facilities have sustained two staff deaths related to the virus.

Across New Jersey, 7.282 million COVID-19 inoculations have been administered.

Throughout the state, 3.210 million people are fully vaccinated, having received either a one-shot formulation from Johnson and Johnson or both doses of the two-shot Pfizer or Moderna vaccines.

In Camden County, more than 388,932 doses have been administered; seventh-most in the state.

An estimated 357,974 New Jersey residents have received a vaccine dose outside of the state, of which 157,928 are estimated to have been fully vaccinated.

According to Tan, New Jersey residents across various age groups have received at least one vaccine dose:

The state is working to make access to vaccinations easier to come by, facilitating walk-up vaccinations at its vaccine megasites—no appointments necessary—and incentivizing inoculations with free beers at participating craft breweries through the statewide “Shot and a Beer” program.

Mutated offshoots of COVID-19, or “variants of concern,” continue to circulate throughout New Jersey; the state has traced 3,253 such cases to date.

Those New Jersey residents who cannot leave their homes due to physical or behavioral health concerns may request a vaccination appointment through the state. Home health agencies will receive dose allocations in order to deliver these shots.

Medicaid members may schedule transportation to a vaccine appointment by calling Medicare at 1-866-527-9933 at least 48 hours ahead of time and notifying respondents that the trip is for a vaccination. 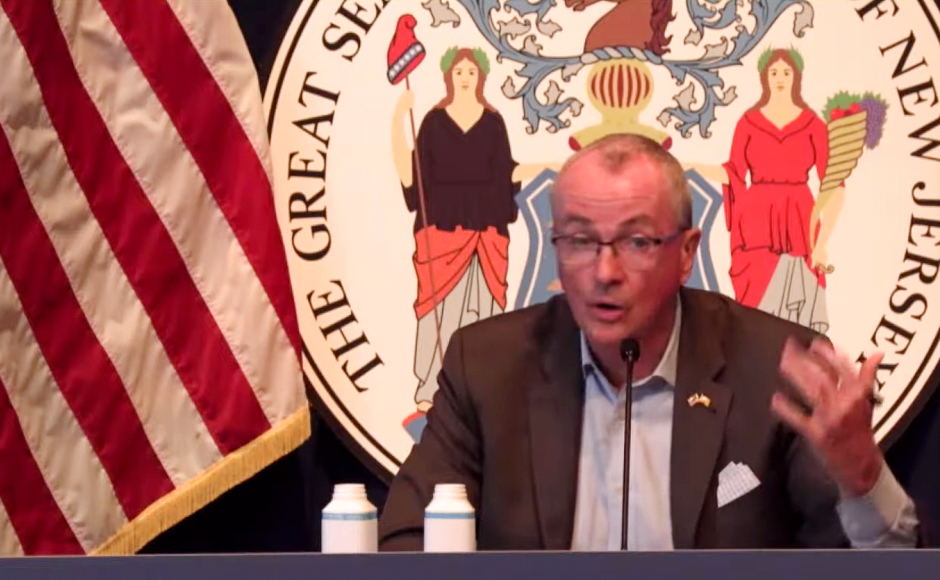 Amid ongoing reports that small businesses in New Jersey are struggling to staff their workplaces, the governor was asked whether he’d be in favor of discontinuing extended unemployment benefits for those who are still collecting them.

Murphy affirmed that the state has no plan to do so, adding, “Our evidence is pretty overwhelmingly that people are doing the right thing and have suffered tremendously.

“I’m not denying the anecdotal evidence that folks are having a hard time hiring people,” he said. “But the overwhelming number of folks who’ve been hit economically have suffered enormously. The benefits are needed for them and their families.

“Second, it’s a passing reality,” the governor said; “these benefits are not forever and always. It’s temporary.”

Murphy also said that when federal guidance for how American Rescue Plan funds may be spent is issued, “a lot of that money is going to go into restaurants, bars, hospitality, small businesses, and that’s one other answer to this challenge right now.”