Trending
You are at:Home»Business»French-Inspired June BYOB to Take Over Former That’s Amore Storefront in Collingswood

Richard and Christina Cusack of Bellmawr plan to open inside the corner property at Haddon and Collings Avenues early this summer. 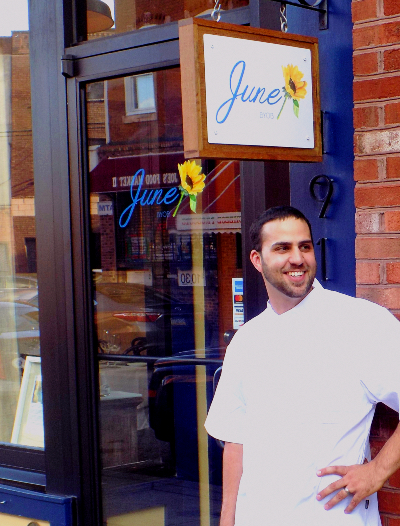 In the wake of the novel coronavirus (COVID-19) pandemic, many Philadelphia restaurants—several renowned, long-established eateries among them—closed their doors for good (Eater Philly has at least a partial list).

Among them was June BYOB, the upscale French restaurant that Richard and Christina Cusack had opened in the 1900 block of Passyunk Avenue just seven months before the pandemic hit the United States.

After trying to pivot to takeaway service, the Cusacks opted for closing down amid the swirling uncertainty of rules governing restaurant operations in the city.

“We were just laying low, saving up money, and trying to get back on our feet,” said Christina Cusack.

“We were looking in Philly for places, but everything was still so expensive and not worth it.”

When the couple discovered the storefront at 690 Haddon Avenue in Collingswood, they knew they’d found the new home for their business.

“That [property] was always the first thing I would see going through town,” Christina Cusack said. After its renovations are complete, “it’ll really be an eye-catcher,” she said.

The location, which previously held Alfredo Fischioni’s That’s Amore, once had been the subject of eminent domain discussions from the borough government for its level of disrepair. But this summer, the Cusacks plan to reopen it as the new home of June BYOB.

Significant improvements have been made to the building, including a pair of transom windows that will allow for air to circulate freely throughout the restaurant—a must as New Jersey eateries transition back to full service in the wake of the pandemic.

At full capacity, June will seat 50 patrons within its dining room and in a small, outdoor section along Collings Avenue. Its interior fireplace will feature a small reception area with a couch and coffee table for waiting guests.

Christina Cusack said the décor of the space will take its style cues from the baroque design elements of the Palace of Versailles, with a touch of finery in the form of gold cutlery and white linens. Meanwhile, according to Chef Richard Cusack, the menu will trend more rustic. 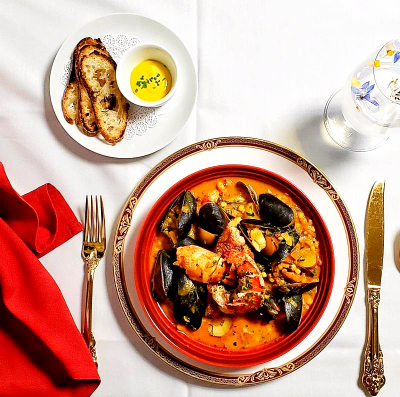 A marriage of old and new

In addition to innovating a novel dish, Richard Cusack enjoys reviving “old-school, peasant, homestyle” recipes, and presenting them with a flourish.

“I like opening up an old book, finding something that’s old and really good, and bringing it back,” he said.

A dish like baeckeoffe—a traditional Alsatian meat stew with Riesling marinade, topped with a layer of bread and bacon—has never appeared on one of his menus, but could make the cut in Collingswood.

Other of Richard Cusack’s standbys include a trio of duck: a red-wine-marinated duck breast, served with a piece of seared foie gras, mushroom duxelles, and duck confit, all over duck ravioli, and glazed in duck jus.

“If you’re going to do this, go all-in,” Richard Cusack said. “We want to make it taste good so people come back.”

The chef also enjoys delighting guests with a bit of culinary theatrics. Whether pouring some champagne over Langres cheese until it bubbles over, or serving crepes suzette with a tableside flambe, he takes pride in creating an experience that families will remember.

“When I go out to eat, I like to put on a nice suit and have fun,” Richard Cusack said. “That’s why I like doing tableside service; I want to put on a show.

“It’s entertaining,” he said. “It makes you feel special, and I like seeing it. My dad still talks about a flaming pineapple he had in Chinatown, and it’s been 40 years.” 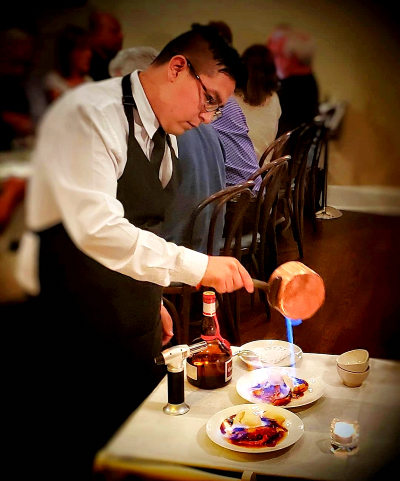 Of course, Richard Cusack also has plenty of substance to back up the flair.

Among his mentors is Pierre Calmels, whose tutelage “molded me into what I can do now,” the chef said.

Working under Calmels “was like boot camp training for French food,” Richard Cusack recalled, but it shaped him into a force to be reckoned with.

“[Calmels]  is always checking in on me,” he said.

“He helped me open my last place.”

Just as big of an influence on Richard Cusack’s cooking was his mother, June, for whom the restaurant is named. The chef traces his earliest memories in the kitchen to time spent with her.

“My mom’s food made me interested in food,” he said. “It’s still fun to cook with her.”

June is also the prospective opening month for the Cusacks’ Collingswood restaurant. No tentative date has been established; stay tuned for updates.