With the COVID-19 delta variant on the rise across the country, health officials urge residents to get vaccinated, gather outdoors, and mask up when with people outside their immediate households. 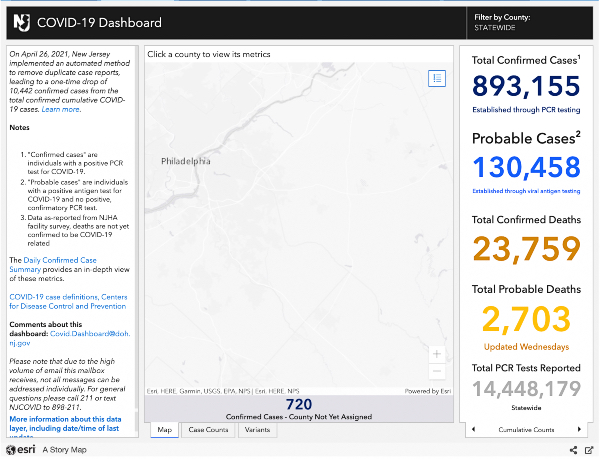 Sadly, eight more residents have perished from complications related to the virus, bringing the statewide, confirmed death toll to 23,754 lives lost during the pandemic.

In addition to those lab-confirmed fatalities, the state has acknowledged another 2,703 probable COVID-19-related deaths—five more than previously reported.

More than 14.448 million polymerase chain reaction (PCR) tests for COVID-19 have been performed statewide, with a 10.157-percent positivity rate per 100,000 residents.

The statewide average of COVID-19 spot positivity testing based on PCR test results stood at 1.49 percent June 26; in South Jersey, it was lowest, at 1.24 percent.

Rt, the variable that describes the seven-day, rolling-average, statewide rate of transmission of new COVID-19 cases, hit 0.95 on June 30.

Throughout New Jersey, 296 people currently are hospitalized with a suspected (49) or confirmed (247) case of COVID-19, Murphy said.

Among those hospitalized patients, 53 are in intensive or critical care, and 29 of the ICU and critical-care patients (55 percent) are on ventilators.

In New Jersey’s 71 critical care hospitals, 26 patients were hospitalized with COVID-19 yesterday, while 35 others were discharged.

Murphy again noted this week that the bulk of those people hospitalized with the virus are not vaccinated against it.

“This is a pandemic of unvaccinated people,” the governor said.

Across the state, long-term care (LTC) centers have reported 1,486 cumulative outbreaks of COVID-19, and 25 are dealing with an active outbreak. LTCs account for 55,018 infected patients and staff in New Jersey, or 6.2 percent of total cases.

That includes 32,795 residents and 22,223 staffers sickened by the virus, as well as 8,062 lab-confirmed resident and staff deaths (34 percent of the statewide confirmed total), with facilities self-reporting 144 staff deaths.

Of 630 veterans residing in three state-run homes, 456 residents have tested positive for COVID-19, and 156 have died from complications related to the virus. Three hundred veterans have recovered from the virus. No resident is currently COVID-19-positive.

The facilities at Menlo Park, Paramus, and Vineland are staffed by 1,337 workers, one of whom is presently COVID-19-positive. The facilities have sustained two staff deaths related to the virus.

At state-run psychiatric facilities, 367 of 1,133 patients and 1,080 staff members have tested positive for COVID-19. Fourteen patients and eight staffers have died from complications related to the virus.

To date, 128 New Jersey children aged 1 to 18 have been diagnosed with pediatric multisystem inflammatory syndrome (MISC). Four of those cases were reported in Camden County, tied with Cumberland and Monmouth Counties for third-least in the state.

Across New Jersey, 9.89 million COVID-19 inoculations have been administered.

Throughout New Jersey, 4.828 people have been fully vaccinated in-state, having received either a one-shot formulation from Johnson and Johnson or both doses of the two-shot Pfizer or Moderna vaccines.

In Camden County, 528,519 doses have been administered; seventh-most in the state.

An estimated 346,547 vaccine doses have been administered to New Jersey residents outside of the state, of which 148,935 are estimated to have been fully vaccinated.

Health officials still on the lookout for B.1.617.2 ‘Delta’ variant

Last week, New Jersey Health Commissioner Judy Persichilli noted that the U.S. Centers for Disease Control (CDC) believes the B.1.617.2 “delta” variant, initially identified in India in December 2020, may become the leading variant in the United States within the next month, and is believed to be spread by “children and young people.”

The commissioner added that the delta variant “could result in local [COVID-19] surges among the unvaccinated.”

Delta currently accounts for 7.3 percent of the variants sequenced in New Jersey in the past four weeks (up from 5.1 percent two weeks ago), and is believed to be 40 to 60 percent more transmissible than other strains of the virus.

Presently, the most common COVID-19 variant in the United States is the B.1.1.7, or “alpha” variant, which was first identified in the United Kingdom, and has been detected in all 21 New Jersey counties.

B.1.1.7 has been associated with a 50-percent increase in COVID-19 transmission over earlier strains of the virus detected in New Jersey, and likely increased severity of infection based on hospitalization and case fatality rates.

The P.1 “Brazilian” variant accounts for 3.5 percent of the variants identified in the past month, and smaller percentages of the California variants B.1.427 and B.1.429 also were reported in the data. 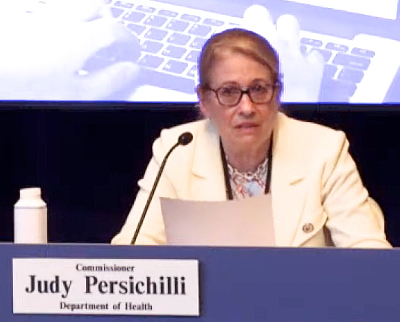 Holiday weekend precautions: ‘Be as vigilant and careful as possible’

Despite “relatively flat” case numbers, Persichilli noted that “COVID-19 is still circulating,” and the increasing prevalence of variants of the virus “are cause for concern,” as “most of the state is seeing moderate COVID-19 activity.”

When gathering with people outside of their immediate families, residents are urged to gather outdoors with guests who may be unvaccinated.

Persichilli also encouraged all residents to wear a mask among anyone whose vaccine status is unknown, and to maintain a six-foot physical distance “from people who don’t live with you.

“Be as vigilant and careful as possible,” she said. “That’s the biggest risk, the unvaccinated.”

State epidemiologist Dr. Christina Tan seconded Persichilli’s recommendations, adding an appeal for residents to get the vaccine to help “stem the spread of variants,” including the delta variant, which is now the second-most prevalent across the United States.