Back-to-back losses to the New York Rangers were the lowest point of a two-week span in which Philadelphia dropped 10 of 11 games. 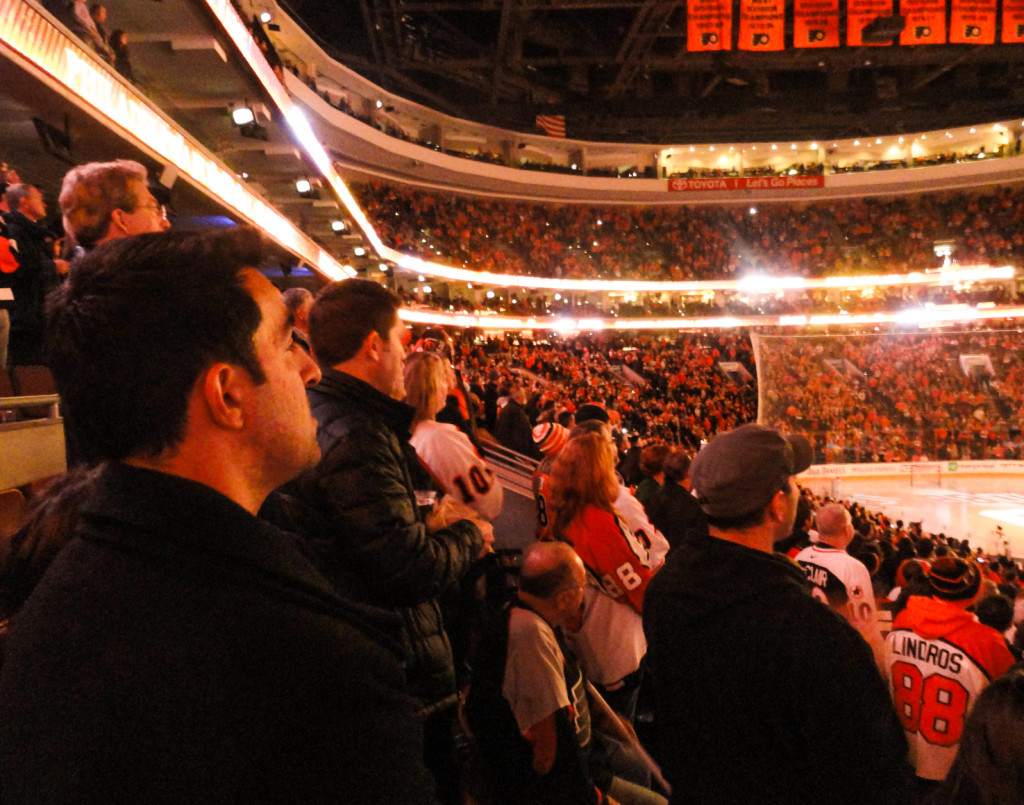 Flyers fans haven’t had much to cheer for so far this season. Credit: Matt Skoufalos.

The Philadelphia Flyers appeared to have righted their wrongs by mid-November, taking three games in a row and six of eight overall.

Since that time, they have lost 10 of 11 games, including three to their divisional rival New York Rangers and five more to teams currently in a playoff position, acquiring two points in shootout defeats against the Ducks and Islanders.

“You can’t beat us,” was the chant coming from the fans at Madison Square Garden on Saturday as they watched the Rangers complete their home-and-home sweep against a Philadelphia Flyers team that had been booed off the Wells Fargo Center ice the previous afternoon.

For an encore, the team gave up a tie-breaking goal in the final 11 seconds of a contest against the San Jose Sharks to kick off a tough western road swing on Monday, and fell to the Anaheim Ducks in a shootout on Wednesday night.

Philadelphia’s struggles have now amounted to six losses in a row, eight straight road defeats and 10 losses in their last 11 games played.

Beyond an explosive first line that includes two of the league’s top scorers, Jake Voracek and Claude Giroux, the Flyers incite little fear in the opposition. The third component of that line, winger Michael Raffl, had scored six goals in 12 games before suffering a foot injury blocking a shot.

His replacement, second-line forward Brayden Schenn, has contributed nicely in Raffl’s absence, but moving Schenn up has only opened up holes throughout the remainder of the lineup.

Last season’s team-leader in goals, Wayne Simmonds, has been productive on the power play, but hasn’t offered much elsewhere at even strength, even after being shuffled up and down in the lineup in a frantic search for chemistry by head coach Craig Berube. Against the Ducks, Simmonds finally broke out for a pair of goals, including a heroic, last-second, game-tying goal.

Sean Couturier, who looked like an emerging power forward at the end of last year, finally potted his first goal in 10 games against the Sharks on Monday. Calder Trophy finalist Matt Read hasn’t scored a goal in his last 19 games. R.J. Umberger, whose acquisition from the Columbus Blue Jackets was essentially cap relief from the contract of team (and fan) favorite, Scott Hartnell, has been similarly unproductive, scoring only his second goal of the season Wednesday.

The slumping Vincent Lecavalier, whose floor-to-ceiling images graces the windows at the Flyers team store in the Wells Fargo Center is literally the poster boy for the team’s woes. Acquired as a well-paid free agent after his contract was bought out by the Tampa Bay Lightning two seasons ago, Lecavalier’s outsized cap hit has overshadowed his contributions to the team. By year’s end in 2014, he was playing on Berube’s fourth line; on Monday, he was a healthy scratch for the first time in his career.

The man they once called “the Michael Jordan of hockey” was not the only Flyer to suffer a performance-based benching: defensemen Michael Del Zotto, Andrew MacDonald and Luke Schenn as well as foreign import Pierre-Edouard Bellemare have all watched games from the press box in the first two months of the season. Berube’s message to his players is clear: if you do not play well, you do not play.

In truth, there seems to be little motivation to offer the squad in terms of negative reinforcement. After the first of three losses to the Rangers, even a postgame locker-room appearance from general manager Ron Hextall failed to generate any jump in the squad: they promptly dropped their next contest in the final seconds of John LeClair/Eric Lindros Night against the Minnesota Wild.

A subsequent closed-door meeting with Berube after back-to-back losses to the New York Islanders and Detroit Red Wings did little to change their fates as well. The team even sounds beaten in the press, with post-game remarks like: “We’re playing like crap, and we deserve to get booed” (Wayne Simmonds) and “Nothing seems to be going our way lately” (Sean Couturier).

Berube’s remarks have been similarly critical of the team’s confidence, lack of focus, and consistency of effort in its play, particularly away from home, where the Flyers are averaging a full goal-and-a-half less per game.

Despite their record, the Flyers have better offensive numbers than might be expected: they rank fourth in the league on the power play and 14th overall in goal scoring.

But the team is dead last in the league on the penalty kill, which is a real detriment to a club that sits in the middle of the pack in both major (16th) and minor (18th) penalties assessed. With a good set of penalty killers and a great special teams coach in Ian Laperriere, who made a career in killing penalties, the team could well turn it around.

But how long it takes—and the size of the hole out of which they’re digging—is what has yet to be determined. Despite the shootout losses in Anaheim and Long Island, the Flyers picked up huge points in each. Celebrating a point here and there may sound ridiculous, but these scant points could be the difference in building confidence in the team moving forward.

And if nothing else, in Anaheim, the Flyers proved that they are still going to fight to the end. They had that magic last year, making multiple late comebacks, and anything that helps them to find it again is worth celebrating at this point.