Family remembered the child as being sweet and loving. Police who had responded to the 9-1-1 call wept alongside them. Baskerville, Jr.’s alleged killer, Zachary Tricoche, has not yet pleaded in the case. 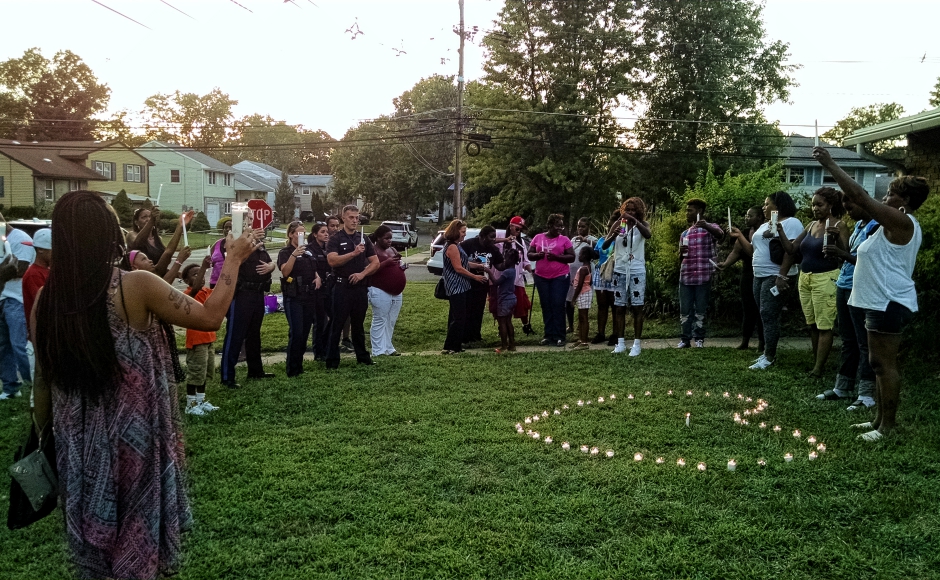 Friends and family lit candles and prayed at a vigil for Jamil Baskerville, Jr. in Pennsauken. Credit: Matt Skoufalos.

Outside his Pennsauken home, friends and family of the late Jamil Baskerville, Jr. held hands and cried Saturday evening.

They had gathered to hold a vigil for the toddler, whose life was cut short in an apparent fatal beating last weekend.

They hung a sheet on the side of the house, atop which was written “Lil’ Millz” and “White Boy,” the fair-skinned child’s family nicknames, and signed it with wishes of sympathy.

The group lit candles, prayed, and took turns sharing remembrances of a child whose personality was only just starting to emerge.

His grandmother, Melissa “Missy” Baskerville, was regularly called on to rock the boy to sleep when his mother couldn’t get him settled. 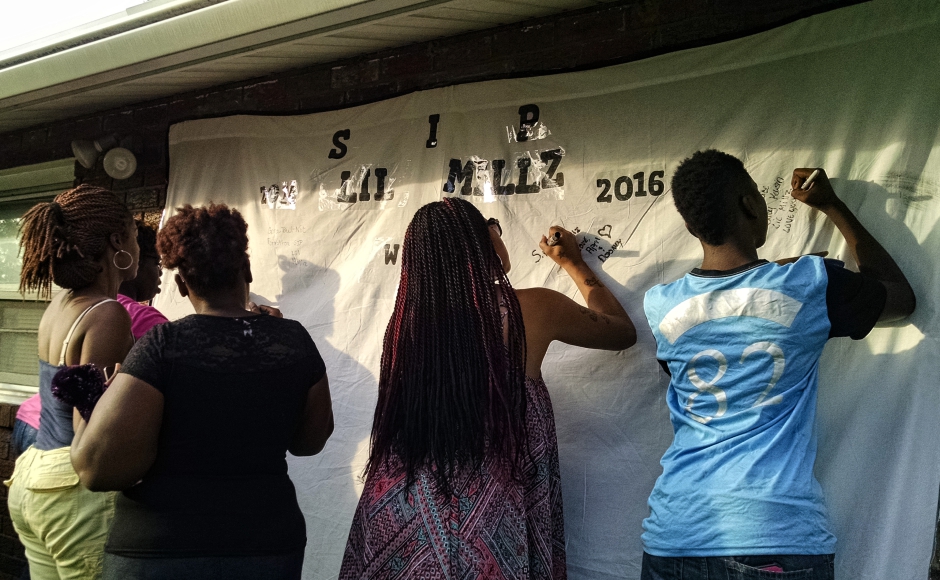 Dawn Fassell, Jamile Jr.’s great-aunt, said the toddler was a happy child, with a smile that could light up a room.

Fassell described the family as “extremely close-knit,” and loving.

Until Baskerville, Sr.’s incarceration, the boy’s mother—who was not present Saturday—and father had been together since they were teenagers.

“The last I know they were good,” she said. “[Jamil] loved his children unconditionally.”

She asked all in attendance to “please keep [Jamil, Jr.’s] sister and brother in your prayers.

“Every card, every prayer, every Facebook post is appreciated,” Fassell said. “I know these children were loved. They did everything together.”

“I just want justice for my grandson,” Missy Baskerville said. “I just want peace,” she said, adding that the child’s alleged killer “took a precious baby” from his family. 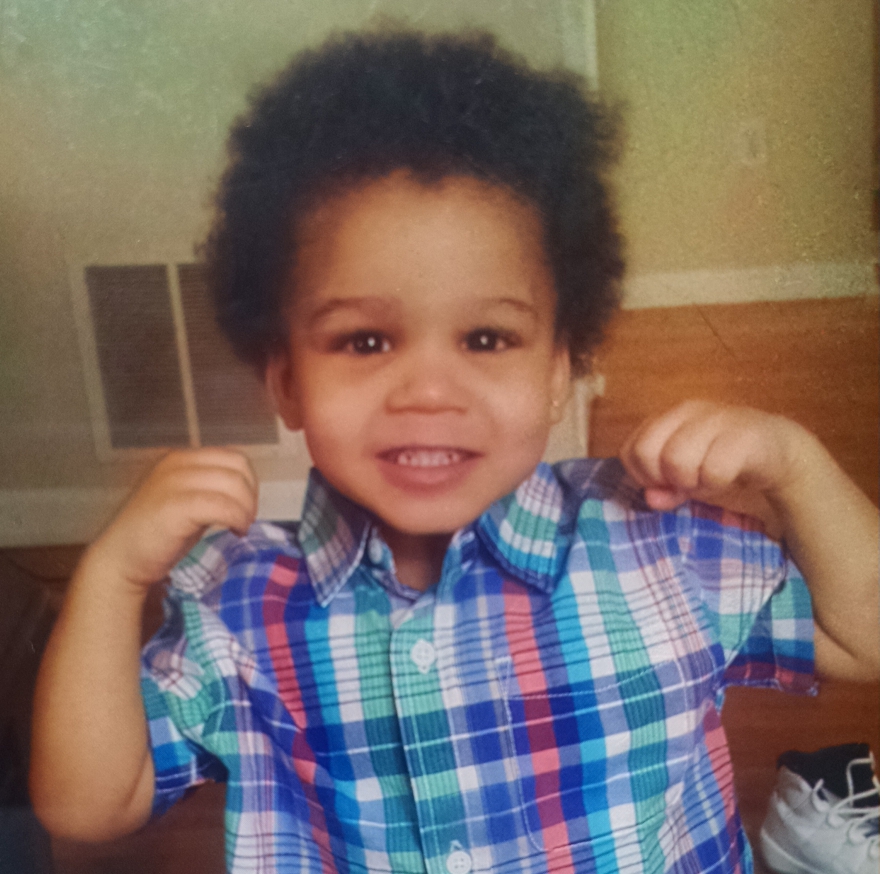 Jamire Baskerville said he is struggling to make sense of his loss while also trying to stay focused on the late toddler’s siblings, who are in the care of child services at the moment.

“I know there’s two other kids that need me,” he said. “The bigger picture is to make sure these other two kids are safe.”

His nephew “didn’t deserve the way he went out,” Jamire Baskerville said.

“He should have had somebody to protect him.”

Pennsauken Patrolmen Nicole Kulyk and Linnette Ramos were on hand Saturday to control traffic around the vigil. Kulyk started her shift early and Ramos came in on her day off to be with the family in their mourning.

Both had responded to the 9-1-1 call at the home a week earlier, staying throughout the investigation to keep the other children distracted and rock them to sleep. Afterwards, they’d brought them gifts bought with donations from fellow officers.

“It’s been hard on us,” said Kulyk, who has an 18-month-old at home. “Sometimes people think police officers are a little cold. We care a lot. We were very upset. The two other children that were there have had a huge impact on me.” 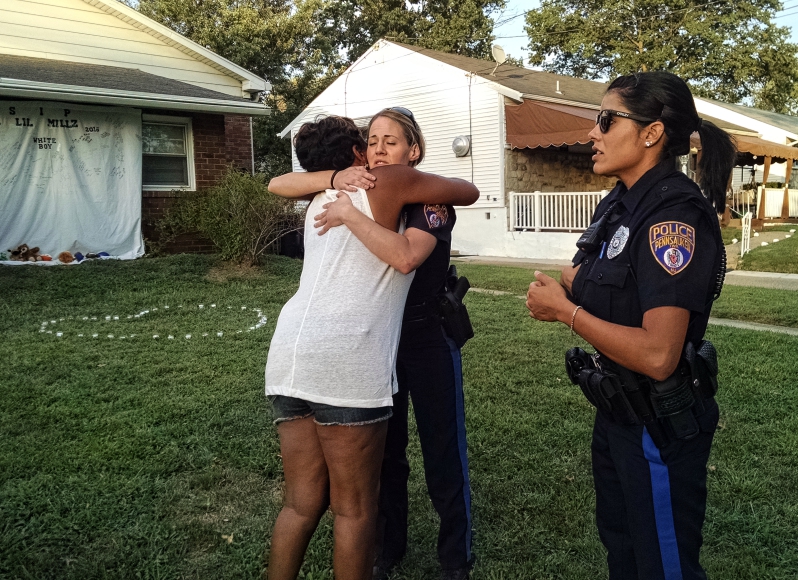 Ramos, who was the first officer through the door last weekend, said she hoped women who suffer domestic abuse would understand that there is help available for them.

“Sometimes they don’t know they’re in a domestic violence situation until it’s too late,” she said.

“Take your kids and go. There’s a whole lot of services.”

Fassell said services for Jamil Baskerville, Jr. will be held at the Carl Miller Funeral Home in Camden City on September 3.